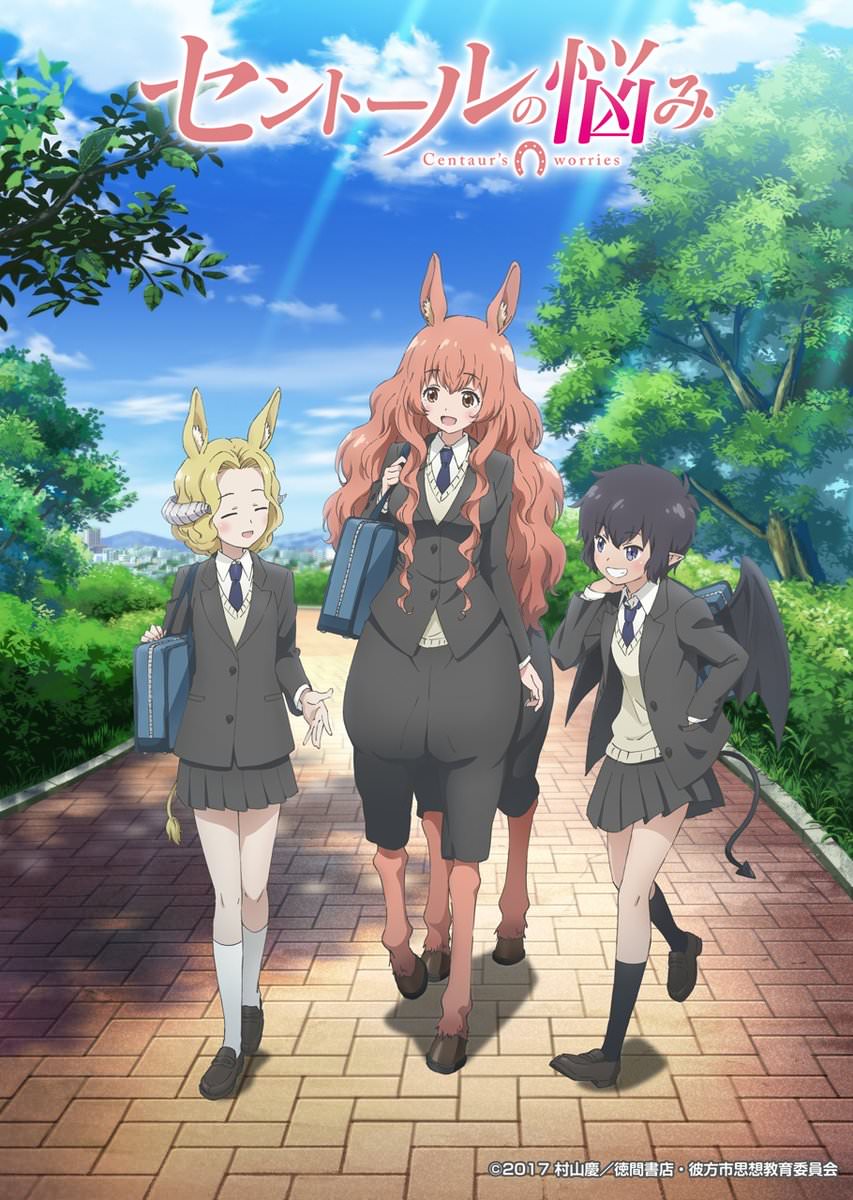 We’ve seen anime focused on things like dragons and serpents in recent years, but how about other fantastic demi-creatures like centaurs or mermaids? If you’ve ever wondered what the world would look like if humans evolved into these and other forms, this is the anime for you. Spoiler: It’s actually not that different from the present, in good ways and bad…

Synopsis: Himeno is a sweet, shy little centaur girl. In her world, everyone seems to be a supernatural creature, and all her classmates have some kind of horns, wings, tails, halos, or other visible supernatural body part. Despite their supernatural elements, Himeno and her best friends, Nozomi and Kyouko, have a fun and mostly normal daily school life!

If you were to solely go off that synopsis, this would seem like your average fantasy slice of life anime, and in many ways, it is. But look past the typical everyday life situations involving these creatures, and you’ll actually find an anime that also deals with socially relevant topics like racial discrimination.

However, before we get to that topic, let’s take a minute to say that—generally speaking—this anime hardly has what you can call a cohesive story. Each episode consists of two segments, and there just really isn’t a continuous storyline in this show. Each episode kind of stands on its own, and for that reason, I never felt as invested in this anime as I should have been.

“Hime is self-conscious about how her vajayjay looks (since she’s a centaur, she’s never actually seen it), so her, Nozomi, and Kyouko take turns examining each other’s, for reassurance purposes.“

Yes, the show does a pretty good job of worldbuilding and detailing some of the different races, it’s just that I don’t think that most of the other things that happen in this world are terribly interesting, and far too often, this anime seemed a little boring to me.

There are some exceptions, though. One that immediately comes to mind is what I’ve affectionately termed “Vag Watch”, and it’s exactly what it sounds like. Hime is self-conscious about how her vajayjay looks (since she’s a centaur, she’s never actually seen it), so her, Nozomi, and Kyouko take turns examining each other’s, for reassurance purposes. Yeah, that actually happened… 😛

That’s pretty unusual, yet it’s even more unusual for an anime to go from something like that to serious social issues. It should be noted that regardless of whether they’re a centaur, mermaid, angel, imp, satyr, snake person, amphibian person, or some other race, all of the characters in this show are human. In this anime, human evolution took a dramatically different turn, but all of these races live side by side, yet things aren’t always civil.

There’s no better example of this than what we see in episode nine, which tells a story of a boy being held in a concentration camp. Since we see various races involved in this persecution, it seems to revolve around territory rather than being strictly based on race, yet it’s still really heavy stuff that you just don’t expect to see in anime, much less one like this. Now, this episode turned out to be a flashback, but even back in the present day, racial discrimination and prejudice still exists, though, obviously not to that extreme. It’s just so strange that Centaur no Nayami would go this route, however, considering what our world is currently like, I did appreciate the decision to highlight this topic.

So you have this quirky slice of life story involving all these different fantastic creatures that coexist together, but then there’s the social commentary about race relations. Considering how different these two subjects are, I think Centaur no Nayami pulled it off about as well as you could hope for, yet I still feel like neither of these subjects are as significant/entertaining as they would be on their own. 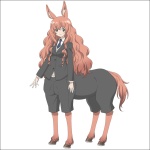 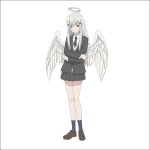 When it comes to the characters, I’m a little disappointed in this anime. Among the main and supporting characters, you have so many unique and fascinating races, yet I thought a lot of these characters were surprisingly underwhelming.

Himeno is a pretty good example. She’s a cute centaur girl, but if you were to take away her defining quality and just envision her as a normal human, she’s a little bland. I think the same can be said of Nozomi and Kyouko, who are an imp girl and satyr girl, respectively. To some degree, Nozomi has a strong personality (at least compared to the other two), yet she too was on the bland side, and Kyouko was completely forgettable herself. What I did like was seeing Hime’s home life come to the forefront. Both Hime and Manami have younger siblings, or in Hime’s case, a young cousin that she takes of, and these scenes at home help infuse both girls with some personality that they might otherwise be lacking.

Speaking of Manami, this angel girl might’ve been more entertaining than both Nozomi and Kyouko, and she ends up getting more meaningful camera time than either of them, since we see a lot of her home life and we see none of Nozomi’s and very little of Kyouko’s. But without a doubt, the most interesting character in the show has to be Quetzalcoatl, an antarctican (basically a snake person) exchange student that isn’t exactly universally accepted, thanks to her peculiar looks. Like Hime, most of Quetzalcoatl’s intrigue comes from her reptilian appearance, but at least we get a good amount of backstory on her people, because once you get past how different she looks, she’s also rather unremarkable.

As for the yuri, the very first scene in this anime shows Himeno and Nozomi kissing (it was written into a play they were rehearsing), and that was as good a start as you’re going to find, isn’t it? Later, in one of the better episodes of the season, we see Hime go on a date with her yabusame-loving kouhai, so perhaps she does swing that way. Then again, she does eventually accept a love letter from a boy, but the boy turns out to be a perv, so who really knows.

Aside from that, Centaur no Nayami does have a yuri couple, and guess what? They’re actually canon! I’m talking about Mitsuyo and Michiru, two girls that first show up and disprove Manami’s proclamation that girls don’t kiss each other once they’ve grown up. Sadly, these two hardly have any screen time at all, so their kiss is the lasting memory that viewers will have of them. Last but not least, there’s also Manami, who may be dating a girl herself (they do go on a date to an art museum and they interlock their arms), so perhaps time will make Manami out to be a hypocrite… 😛

In short, I think the girls themselves are only mildly entertaining, but there are some nice yuri moments that will make fans happy, even if most of them are fleeting.

First off, this anime isn’t all that easy on the eyes. Maybe it’s just the style, but it almost looked like the artists were in a rush, and the result is an anime with a hastily-drawn look that kind of reminded me of Kanamewo, an anime short that was created by one person. Looking at some of the other works of Haoliners Animation League, this style seems to be their M.O., but let’s just say that the anime coming from this Chinese studio will likely never be confused with that of KyoAni, though, they can still do better than this.

But what’s most surprising about this anime is just how much fanservice there is in this show. I watched the Blu-ray, which surprised me and went ahead and featured a lot of uncensored breasts. I think most people generally associate slice of life anime with being family-friendly, but this one seems to have other ideas. I’m not complaining about it, it’s just totally unexpected that this show would go the ecchi route. At one point, there’s even a shower scene involving a young centaur girl who’s probably somewhere between 5-7 years old, and you guessed it, full nipples on display. That was kind of uncomfortable, and had this been a live-action film or TV show, this understandably would’ve caught some heat for including that. Anyway, all of the boobs were a big surprise, but don’t let it distract you from the fact that this show simply isn’t a good-looking anime.

Moving on to the music, there isn’t that much to say. This is a slice of life anime after all, so the music is very forgettable, but one thing that did stand out to me was the chiptune music used during a segment spoofing a typical RPG dungeon-crawling mission. That was nice, though it can’t make up for the plainness of it all.

If you’re only interested in cute girls doing cute things, you might actually be disappointed with Centaur no Nayami. Yes, it has some of that, but you can find a ton of other shows that are better examples of the slice of life genre. And then there are the social issues that are hugely important to this anime, but I’m not sure everyone will welcome social commentary in their cutesy anime about mythical demi-creatures.