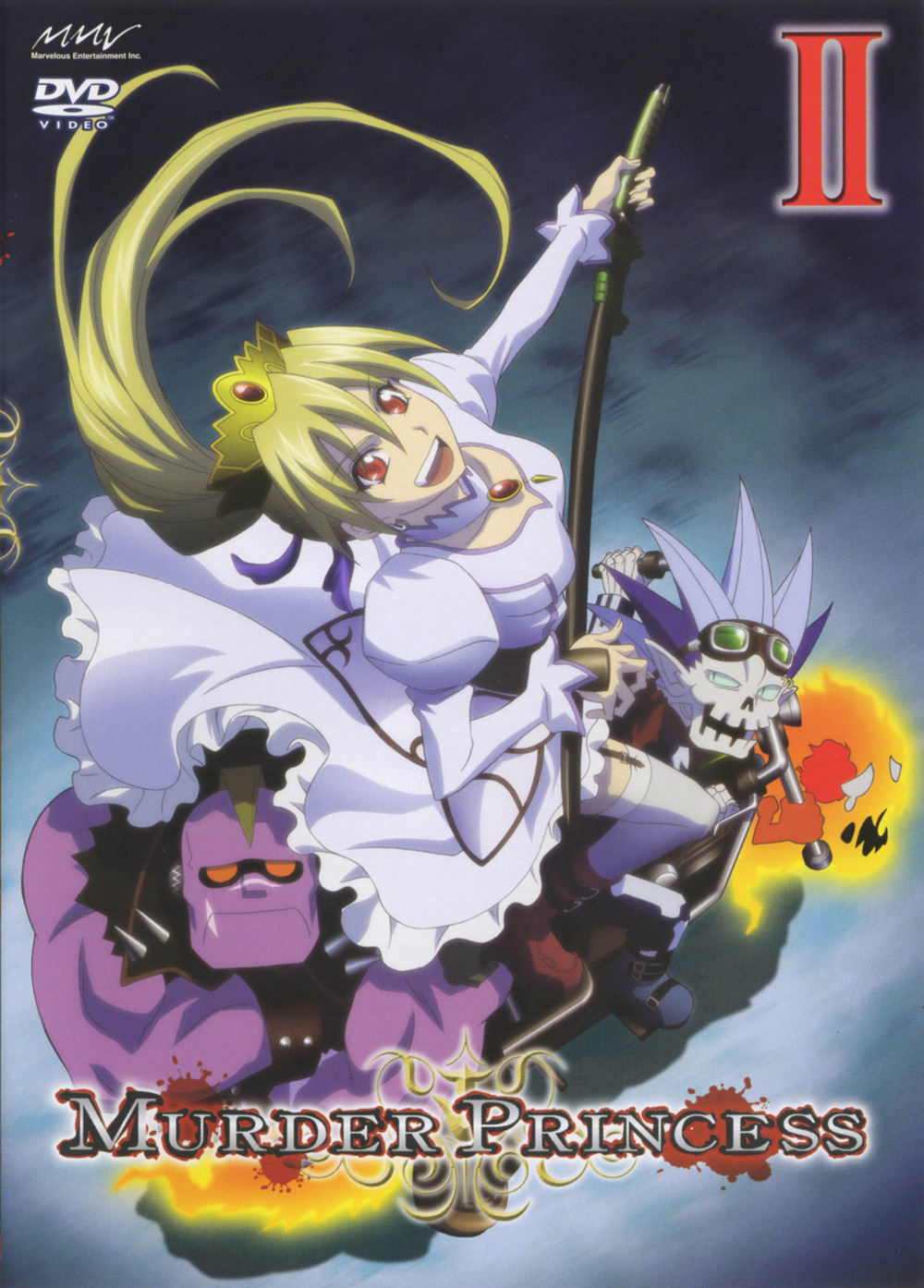 Bee Train (RIP) probably holds a special place in many a yuri fan’s heart, and the reason for that was their propensity for catering to yuri fans with some of their action anime, and wouldn’t ya know it, Murder Princess is another one that gets the same treatment. Well, this ends up being a nice gesture on their behalf, but in many ways, this anime isn’t quite up to the level of the gamed girls with guns trilogy…

Synopsis: In the kingdom of Forland, a coup d’etat occurs which leads to the death of the King. In the last moments of his life, the King sends his second child, Princess Alita Forland to escape. Unfortunately, while fleeing, a life and death situation between Alita and the bloodthirsty bounty hunter Falis causes the two of them to switch bodies. Desperate for the safety of her Kingdom, Alita begs Falis to return and protect the Kingdom, offering herself as collateral. After a swift beating on the rebel forces, Falis resumes the title of Princess of Forland, leading to the birth of the most savage princess in their land, the “Murder Princess.”

When people think of Bee Train, naturally, they think of Bee Train’s excellent girls with guns trilogy: Noir, Madlax, and El Cazador de la Bruja, but lost in that discussion is another Bee Train anime with similar themes (including yuri subtext), Murder Princess.

Unlike the trilogy—which were original productions—the Murder Princess anime is based on a manga with only eleven chapters, so it’s not a surprise that the anime adaptation only consists of a measly six episodes, and I think this is the biggest reason why the story is merely okay. Each anime in the trilogy is twenty-six episodes, which is more than enough time for worldbuilding and fleshing out the characters, and even though Murder Princess actually does a decent job (for a six-episode OVA) of developing the characters, I thought the worldbuilding was a little lacking, though I think that definitely could have been addressed with more episodes.

“This is yet another instance in which I feel like the short length hurt this anime, and another six episodes probably would’ve resulted in a more consistent pacing for the yuri.“

The story itself is rather predictable and unoriginal, but that said, I felt like it was still pretty entertaining (although somewhat rushed), and this anime was never really in any danger of losing my attention. The action is respectable, the fantasy aspects are more than acceptable, the drama is sufficient without overdoing it, and there’s a little bit of comedy that serves to keep this anime from becoming too serious, so it’s a shame that we didn’t get to see what this anime could’ve been, had it been given more material to work with.

As long as your not expecting a story as elaborate and complex as Bee Train’s other efforts such as Noir, I think you might find that the story in Murder Princess is actually surprisingly competent, despite the short length, and while it didn’t win awards or anything like that, I think it still ended up being pretty enjoyable.

The whole body swap dynamic between Alita and Falis is as interesting as you might expect, however, both girls just go along with it much more than I expected, so in a way, it almost feels like it didn’t happen at all. Before the swap, we hardly got to know Alita at all, and it’s even less for Falis, but over the course of the remaining five-and-a-half episodes, both prove to be charming in their own way.

Without question, Falis (in Alita’s body) was easily the star of the show, and she’s a good example of one of those badass girls that have a lot of attitude and charisma. On the opposite end of the spectrum is Alita (in Falis’ body), who certainly is no battle angel, and her warm, gentle personality is perfectly suited to be paired with someone like Falis. But compared to the Bee Train trilogy, I think Murder Princess is probably isn’t quite as yuri-intensive, and that was one of my biggest disappointments about this anime. This is yet another instance in which I feel like the short length hurt this anime, and another six episodes probably would’ve resulted in a more consistent pacing for the yuri.

Falis goes from a seemingly heartless bounty hunter to someone that genuinely cares about Alita, and since Alita was all too willing to include herself as part of the deal she made with Falis in order to save the country, I think it’s safe to assume that the feeling is mutual. Obviously, that deal seemed to have sexual connotations, yet, beyond what’s implied in that promise, the relationship between those two never actually goes further than the standard “I’ll protect you from danger” angle that you normally see in anime like this. Think of something along the lines of Canaan x Maria in Canaan.

As for characters not named Alita and Falis, a lot of the supporting characters also happen to be fairly interesting as well. Whether it’s Pete, Dominikov, Jodo, Ana, Yuna, Akimashi, Kaito, or Cecilia, they all seem to have a little something going for them, and while this OVA clearly revolves around Alita and Falis, most of these other characters aren’t too shabby either. Pete and Dominikov are particularly cool, but don’t forget about those cute little homicidal androids Ana and Yuna. They’re pretty nice themselves, and in this limited amount of time, I like how most of these characters displayed an adequate amount of personality.

That said, the villains are pretty straightforward and lack much depth. Some are more compelling than others, however, I don’t think people will be remembering most of these antagonists with much fondness. Overall, a solid cast of characters ultimately get overshadowed by Alita and Falis and their close relationship, which is nice, but that kind of relationship is to be expected, and you’re not constantly being hit over the head with it.

2007 welcomed both Murder Princess and El Cazador de la Bruja, and since they’re are from the same studio, it’s probably not surprising that they’re visually similar. Murder Princess is more violent and features more over-the-top action, so I might actually give it the slight edge in terms of overall aesthetics. Regardless, this is a satisfying-looking anime that should look nice enough for pretty much everyone interested in watching it.

One of the best things about the Bee Train girls with guns trilogy was the music, but sadly, Yuuki Kajiura was not involved in this anime. Nevertheless, Murder Princess still does okay in this regard, thanks to a very rock-centric soundtrack that seems to suit this anime very well. Subtle is a word that I probably wouldn’t use to describe this show, and there’s nothing subtle about blaring guitar riffs, and you’ll get used to hearing a lot of that here.

Also, the Kill la Kill fan inside me liked hearing Romi Park and Ami Koshimizu (Ragyo and Ryuuko) together once again, even though Alita and Falis didn’t sound too much like their KLK counterparts.

At the end of the day, I think Murder Princess turned out to be a solid action-fantasy OVA that fans of the genre might like, despite the fact that it’s nothing special and definitely suffers a little bit due to the lack of source material. And the modest amount of yuri subtext likely won’t make this anime worth the time to those who aren’t into this type of anime, so just be aware of that.