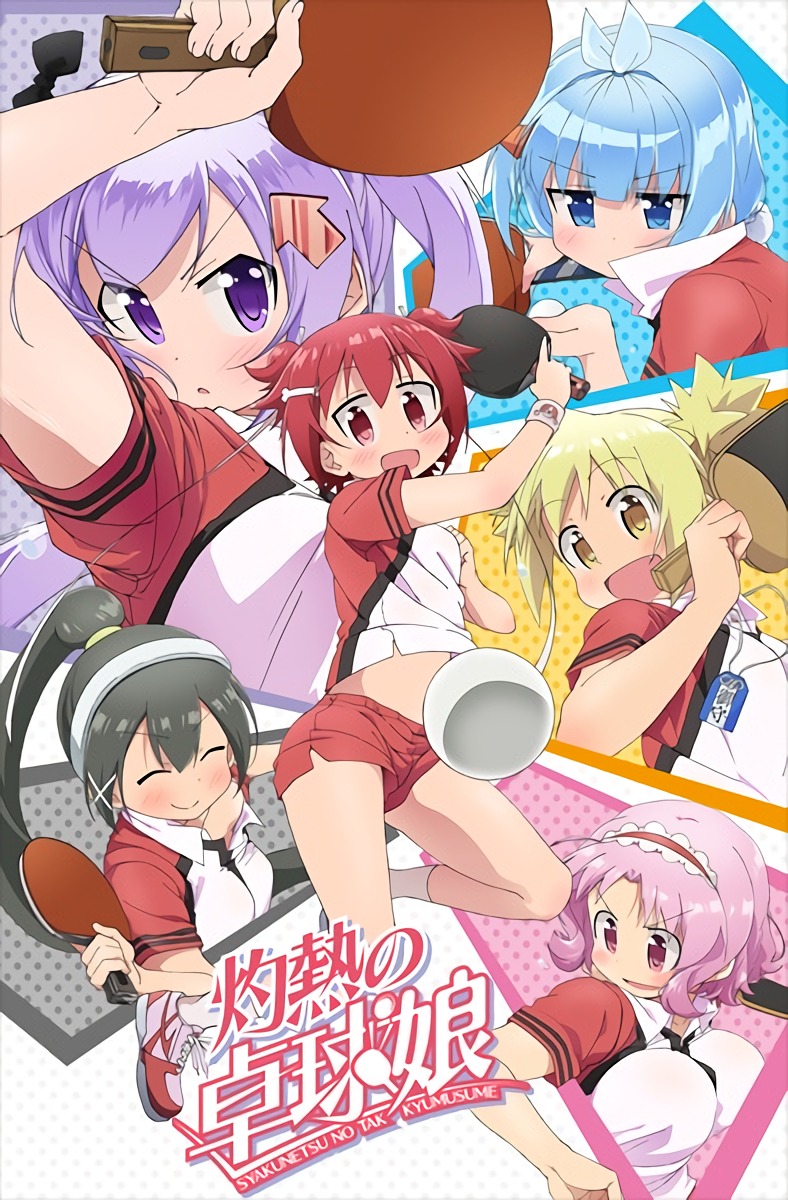 Recently, we’ve seen beach volleyball, badminton, and horse(girl) racing get the anime treatment, but what other somewhat obscure sports anime is out there for us to review? Table tennis seems like it fits the bill, and luckily, there’s enough yuri subtext in this one to make it worth our time~

Synopsis: The world of middle school girls’ ping pong enters an age of heated rivalry as the throne at its apex is surrendered…

Tsumujikaze Koyori, a girl who loves ping pong, has just transferred to Suzumegahara Middle School. Along with her friends who strive to be the national champions, can Koyori bring the winds of change to the school?! The curtain is about to rise on a scorching hot tale of girls who love ping pong!

When I think of table tennis, the first thing that immediately comes to mind is this, but apparently, Scorching Ping Pong Girls has found itself a home amongst the various yuri clubs on MyAnimeList, so it’s only natural that we give it a go and see what it has to offer.

First things first, if you’re even remotely familiar with sports anime, then you’ll know exactly what to expect from the story in this one. Actually, Scorching Ping Pong Girls reminds me a lot of Saki, albeit a more trimmed down version. Just like Saki, it’s a similar tale of a girl who joins a club and quickly rises to the top, only to clash with another member of the team. And through all of this, nationals are the goal each girl has in mind.

There’s very little in the way or originality, but thanks to the quality of the characters, I don’t think this turned out to be a big issue. The bigger issue to me was that—with a mere twelve episodes to work with—there simply wasn’t enough time to include everything, so those dreams of making it to nationals? We never see whether they actually come true, so the competitive climax ends up taking place in the tenth episode, and the last two episodes seem rather cute yet uneventful.

“Given how weird and creepy Kururi can be, you probably wouldn’t expect her to come off as pretty gay, but that’s exactly how it is.“

Personally, I find table tennis a lot more interesting than mahjong, yet there isn’t that same sense of drama and tension that you’ll find in an anime like Saki. I think the number of episodes definitely had to play a factor in this, so rushing through some of the matches was somewhat disappointing to me. On the plus side, despite only a dozen episodes, the show takes a little bit of time to let us get to know these girls a little better, and we get some helpful insight into the strategy involved in table tennis. None of this changes the fact that the story is banal, however, there are a few bright spots that are present.

All in all, Scorching Ping Pong Girls makes no attempt to add anything new or unexpected to the sports anime formula, but it follows the guidelines and still manages to serve up a decent, yet very familiar, story that ultimately isn’t that bad.

Garden-variety story aside, I was actually pretty surprised by how much I liked these characters. Of course, there are also a handful of ships for fans to gravitate towards, be it Agari x Koyori, Hanabi x Hokuto, Mune x Kiruka, or Kururi x Zakuro~

Agari and Koyori get a majority of the spotlight, and like Saki x Nodoka, their relationship goes from bad to good, though, these two are where a lot of the entertainment factor came from. After getting over her initial jealousy towards Koyori, Agari turns into your classic tsundere, and it’s glorious. The world could always use more tsunderes, and Agari is a really cute and charming one that I very much enjoyed.

To almost everyone else, Koyori is very shy and soft-spoken, yet when she’s playing table tennis (or when she’s with Agari), she’s like a completely different person. Her airheadedness brings out the best in Agari, so we get a lot of cute moments of Agari pretending she’s not enjoying Koyori’s company, yet no one buys it. Again, their relationship ends up resembling that of Saki and Nodoka, and I’ll gladly take that. It also doesn’t hurt that Agari gets the most character development of any of the girls.

The subtext involving Hanabi and Hokuto isn’t as blatant as it is with Agari and Koyori, but these two also have a really close and cute relationship. The other pairing from the main cast involves Mune and Kiruka—the third-years of the group—and what you’ll see a lot of is Kiruka using Mune’s sizable assets as a pillow. Overall, these two pairings are more supplementary than anything, but even if they can’t hold a candle to Agari and Koyori, it’s still nice to see a little something from them.

For me, what ended up being the most pleasant surprise, yuri-wise, was seeing Kururi and Zakuro. Given how weird and creepy Kururi can be, you probably wouldn’t expect her to come off as pretty gay, but that’s exactly how it is. The entire reason why Kururi plays is because of Zakuro, and similar to how we get some backstory involving the other pairings, the flashback scenes of theirs really added another layer to their relationship. It’s a shame they only appear in the second half of the season, and the same can be said of the other girls from Mozuyama Jr. High, because in what little time we got to be around them, they seem to have quite a lot of personality.

Part of me wanted to score the characters as an eight, but I feel like there’s a big difference between 7.5 and 8, and I just felt like there was something missing that prevented me from putting them over the hump. Still, I think this is a surprisingly good cast of characters, and I think I prefer them over the casts of Hanebado!, Harukana Receive, and Uma Musume.

Kinema Citrus is the studio behing this anime, and they didn’t exactly bring their A game to the table. To be fair, Scorching Ping Pong Girls isn’t a super serious sports anime like Hanebado! or something like that. This is very much a cutesy sports anime with a heaping helping of moe that often seems like it’s trying to be a comedy/slice of life anime (and it actually pulls it off quite well, but that’s neither here nor there).

The character designs and art style are also pretty simple and straightforward, so no one will confuse this with a good-looking sports anime. Compared to the manga, rallies don’t appear to be quite as exciting, and other than the heavy use of speed lines, the table tennis action itself is a bit underwhelming. Overall, those who take their sports anime seriously probably won’t be a big fan of the very high cute factor and mediocre action associated with this anime, but I think everyone else probably won’t mind all that, so just soak in the cuteness.

Overall, despite the more or less textbook sports anime story and less-than-stellar animation, I think that Scorching Ping Pong Girls was still a pretty enjoyable experience. A lot of that can be attributed to the charming characters, who take what might otherwise be a mediocre anime and lift it up and turn it into something that’s very watchable and better than the sum of its parts. 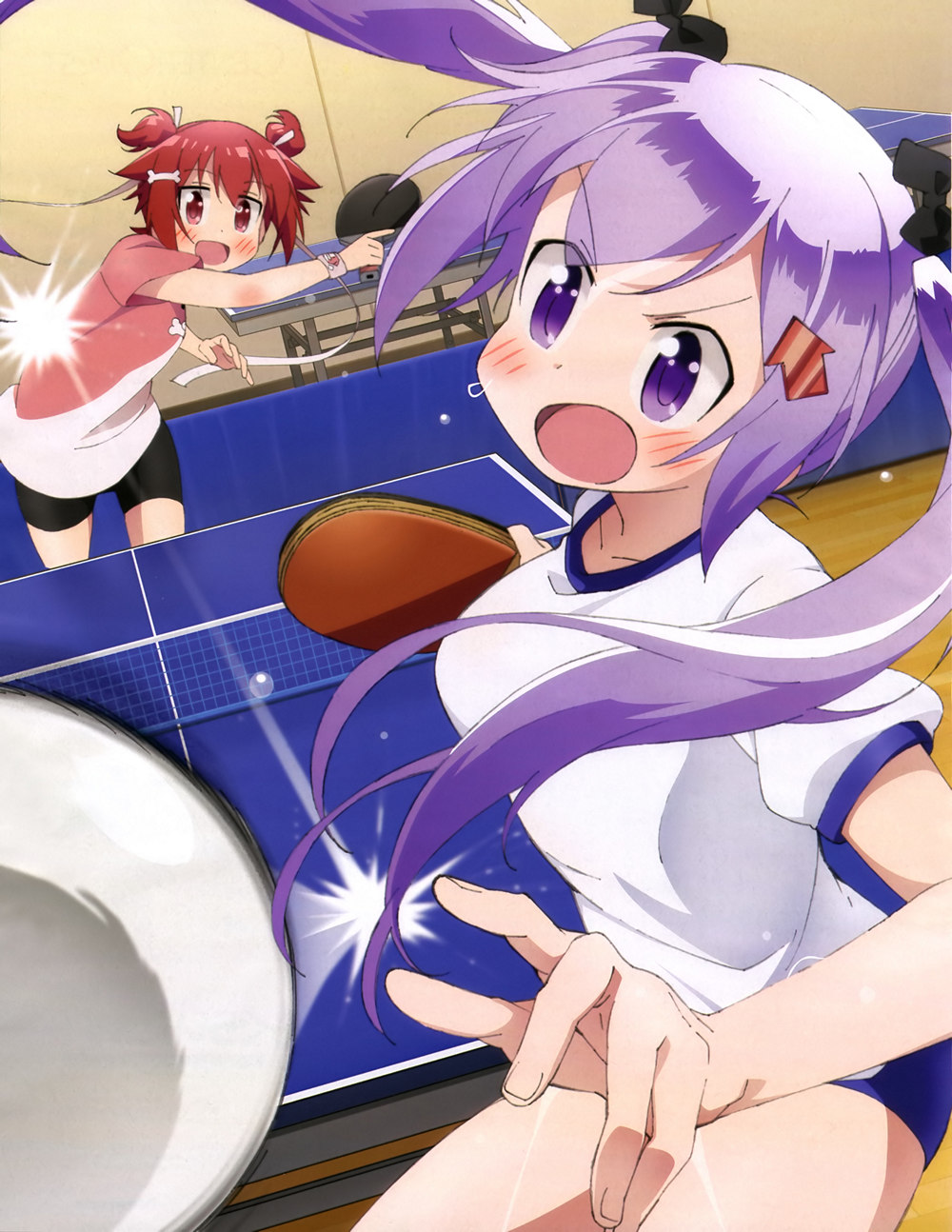