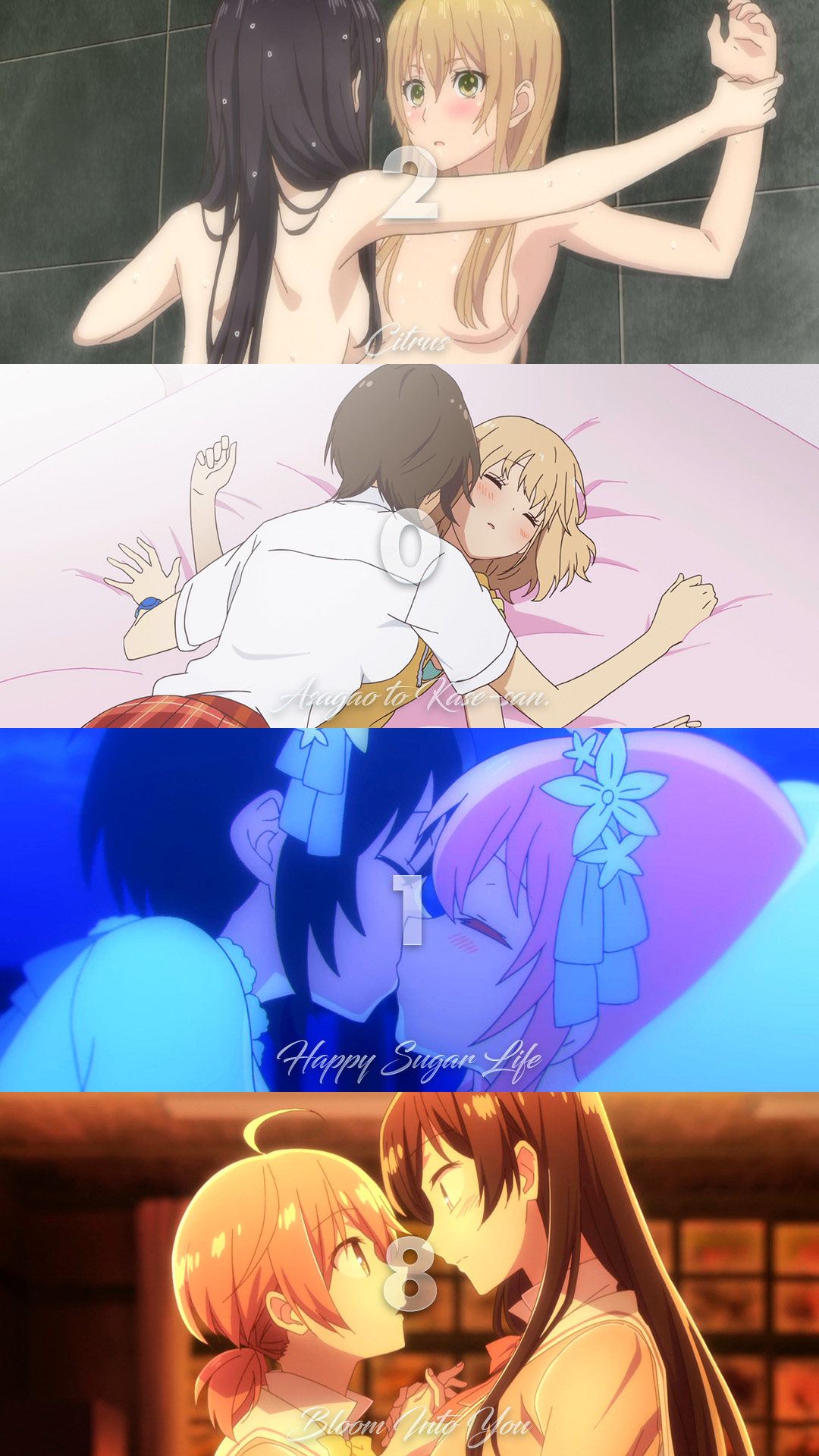 Starting off with the winter season, it finally happened. After years of speculation, the most anticipated yuri anime adaptation this side of Girl Friends finally premiered, and it certainly didn’t disappoint. Of course, I’m talking about everyone’s favorite pseudo-incest simulator, Citrus. After being served tripe like Netsuzou TRap the year before, it was so refreshing to once again get a yuri anime that felt like the creators actually gave a damn. It might not have been for everyone, but I think even non-fans can agree that this was a pretty important moment for the genre, and it really did set the stage for what was bound to become such a great year.

But the winter season had more to offer than just Citrus. Slow Start was an anime with heavy yuri subtext, and even though I personally didn’t enjoy it as much as other people did, I can’t deny that it was definitely a treat for yuri fans who are into cute girls doing cute things. Speaking of cute girls doing cute things, Ramen Daisuki Koizumi-san was another one of those anime, and even though it wasn’t the greatest anime, it gave us another yuri character (and more food porn), so you can do a lot worse than that. Toss in arguably the anime of the season, A Place Further Than The Universe—which technically has a little bit of subtext itself—and the end result is a season that ends up being pretty solid.

In a direct comparison with the winter season of our previous greatest year in yuri anime history (2009), it’s clear that the 2018 winter season definitely had more noteworthy titles to offer.

Moving on to spring, the momentum continued, thanks in no small part to another highly anticipated adaptation, Asagao to Kase-san., which did away with the melodrama of Citrus, and instead just gave us GL in its purest and most adorable form. The six-minute OVA from 2017 got us hyped, but it was just a small taste of what the full-size OVA had in store for us. Personally, this is the most enjoyment I got out of any yuri anime last year. I’ll admit that it wasn’t the “best”, though, it was still my favorite, and fifty-eight minutes just isn’t enough time, so I’m still holding out hope that we’ll get to see another OVA starring these two.

And as crazy as it is to think about, yuri fans had another reason to go to the theater, thanks to Liz to Aoi Tori. After burning fans with two baity seasons of Hibike! Euphonium, KyoAni finally did right by us, and the result was pretty damn good. Unfortunately, a lot of fans probably dismissed this movie due to KyoAni’s bad reputation, yet I think it’s definitely worth a watch.

Similar to how 2017 had Netsuzou TRap, 2018 had its very own trashy short-form anime in the form of Tachibanakan Triangle, which probably won’t be remembered fondly, but it was a little yuri diversion that didn’t take up much time and gave ecchi fans something to get a little excited about.

A couple of years prior, Amanchu! made a big splash (pun intended) amongst yuri fans, so it was nice that we got to tag along with Teko and Pikari on more of their scuba adventures, courtesy of Amanchu! Advance. However, one fatal flaw nearly sunk this second season. I’m talking about the addition of a young boy into the mix, and it isn’t made clear until late in the anime that he’s actually a boy. All yuri fans really wanted was more Teko x Pikari, but that little pseudo love triangle just turned a lot of people off, me included.

In addition to that, Comic Girls, Mahou Shoujo Site, and Uma Musume: Pretty Derby, made sure that the spring season was in no shortage of yuri subtext. You look at those three shows and the thing that really jumps out to me is how different they are from each other. It didn’t matter if you’re a slice of life fan, a magical girl fan, or a sports anime fan, this season probably had some yuri-flavored anime that you were interested in, and top to bottom, I think it definitely outdid the spring season from 2009.

Moving on to summer, in a surprising twist, we didn’t have a pure anime to look forward to, and for that reason, the summer was probably the weakest link of 2018. However, a couple of shows in particular still managed to be pretty damn gay. One of those shows was Happy Sugar Life, which was an anime that had a REALLY controversial pairing between a teenager and a young child, so even though it was actually a pretty entertaining show (with an awesome yandere lead), everything was largely overshadowed by the lolicon antics of Satou.

And then there’s Shoujo☆Kageki Revue Starlight, which was a music anime that ended up being something much more than another forgettable Love Live! clone. This was the type of anime that you could show to a non-music anime fan, and there’s a decent chance that even they might end up liking it. It married intense revue auditions that resembled well-choreographed battles, with enough symbolism to make Ikuhara proud, and once you add in all of the various pairings, you have yourself something that yuri fans should enjoy, and something that feels fresh and original.

These next two anime weren’t as yuri-centric as Happy Sugar Life or Shoujo☆Kageki Revue Starlight, but Harukana Receive and Aru Zombie Shoujo no Sainan might cater to specific audiences: fans of ecchi sports anime and fans of horror anime that’s so bad, it’s good. In both cases, I think these anime passed the test.

Looking at what 2009 had to offer yuri fans, I have to give it the edge over 2018, but despite the lack of a pure yuri anime, the summer still offered a few worthwhile options for fans to enjoy.

Finally we come to the fall season. It’s only fitting that since we started this amazing year out with one long-awaited adaptation, we cap it off with another. And not only is this one arguably the best yuri anime of the year, you can make a pretty strong case for it being the best yuri anime of the last decade, at least. Yes, it’s Bloom Into You, and it’s a shining example of how good yuri anime can be. This one seemed to have it all, drama, romance, deep characters, a good story, solid production values, etc. There simply isn’t a lot to dislike about this anime, and then you throw in a great love triangle on top of all of this? Take notes, anime industry. This is how you do an anime adaption the right way.

In addition to Bloom Into You, the fall season also gave us Tonari no Kyuuketsuki-san and Uchi no Maid ga Uzasugiru!, which turned out to be fun comedies that revolve around a very gay main character. Neither really blew us away or anything, yet the supernatural twist of Tonari no Kyuuketsuki-san was amusing, and despite featuring a grown woman who’s got it bad for a child, UzaMaid! seemed to avoid a lot of the backlash that Happy Sugar Life experienced, but with ridiculous dialogue like “I’m not interested in girls who’ve begun to menstruate,” I doubt anyone took UzaMaid! seriously.

Two other anime from the fall season are worth talking about, namely Anima Yell! and Release the Spyce. The former seemed destined to be mediocre, yet I think it turned out to be surprisingly capable, and on the flip side, the latter was disappointing, but it also ended up being as gay as fans had been hoping for. In some seasons, shows like these two might be the yuri headliner, so to have them behind several other anime just goes to show how impressive this season was. It’s hard to say for certain, but the fall 2018 season may just be one of the greatest seasons in yuri anime history.

Be that as it may, the 2009 fall season was no slouch either. The Sasameki Koto / Kiddy GiRL-AND combo was formidable, and a few other shows help make the season look even stronger, so much so that I wouldn’t be surprised if some people think that fall ’09 was better. Regardless, the fall was yet another strong season for 2018, and it’s great that the year went out with a bang~

Years from now, maybe we’ll look back and remember Citrus, Asagao to Kase-san., and Bloom Into You as fondly as we remember yuri classics such as Strawberry Panic, Kannazuki no Miko, and Sakura Trick. Some years, we’re lucky if we get ONE pure yuri anime, so to have three legitimate ones in the same calendar year is nothing short of amazing, and to have them spread throughout the year is even better. The only bad news to come from this yuri blessing is how every future year will now be directly compared to what 2018 had to offer, and if this year is any indication, not every year is going to look good in comparison.

In conclusion, whether you think 2018 was the greatest year in yuri anime history, or 2009, or 2006, or some other year, it can’t be denied that we’re living in truly exciting times. Sales figures for pure yuri anime usually aren’t impressive at all, yet, nowadays, even seemingly forgotten yuri manga are getting anime adaptations, so perhaps there’s still a lot of room for improvement. Now just give us the anime adaptation of Girl Friends already, so we can once again crown another year as The New Greatest Year in Yuri Anime History.