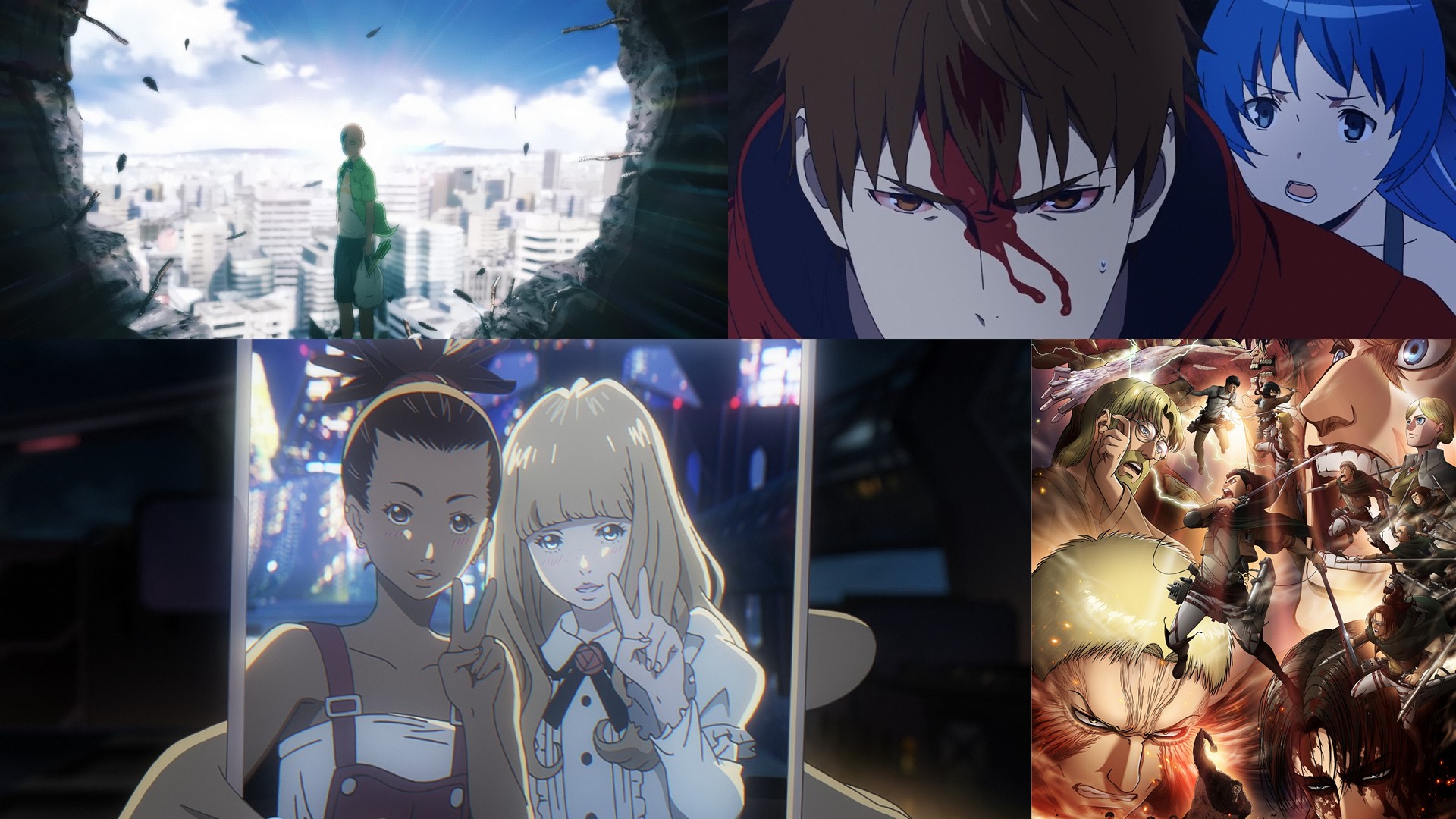 It’s that time of the year again, so enjoy our First Impressions of the 2019 spring anime season that just started~ 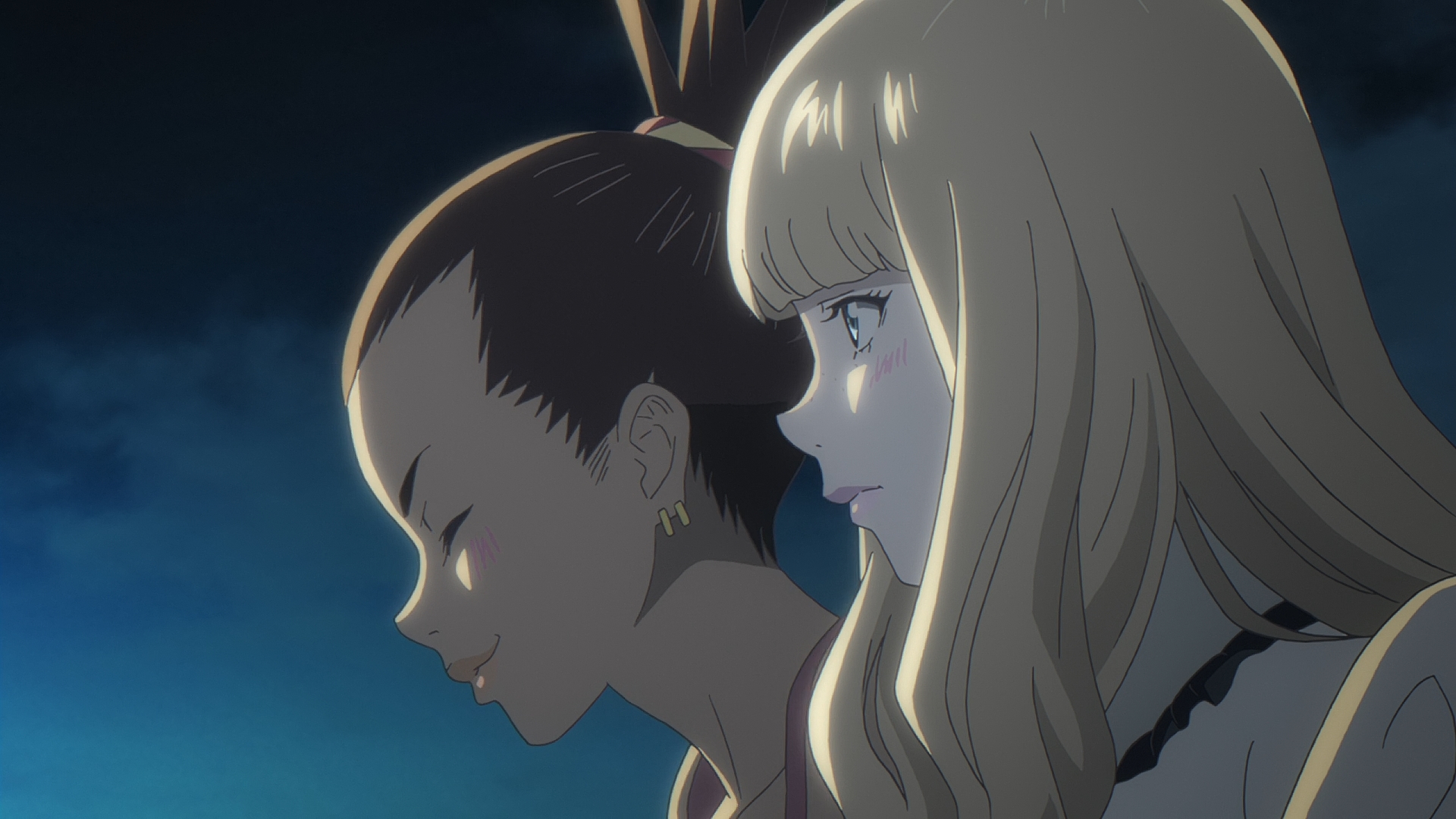 It looks like this is pretty much it. This is the spring season’s wild card that COULD possibly give us yuri fans some of what we’re looking for. The two main characters are both female, and romance is listed among the genres of this anime, so maybe it’s not too much of a stretch to think that maybe this could be the savior of a bad season. Bones is the studio behind Carole & Tuesday, and serving as Chief Director of this original anime is Shinichiro Watanabe, who you may recognize as the director of the iconic Cowboy Bebop, among other titles, so all signs point towards this being an anime worth keeping an eye on.

And I’d say the first episode was definitely a solid start. The story of two girls chasing their dreams of making music is kinda cliché, yet this first episode did a good job of setting the stage for the musical journey that is to come. Given the difference in social standing between Carole and Tuesday—Carole is a former refugee, while Tuesday is the daughter of a wealthy family—this should be interesting, as should the slight sci-fi setting that gives this a unique vibe. As you’d expect from Bones, this anime looks great, and the first episode gives off a distinct folk-sy vibe to the music that should play right in with the emotion and drama that’ll inevitably come later.

This anime is listed at twenty-four episodes, so it’ll be interesting to see if these two will end up making some sweet music together, if you know what I mean. After Hibike! Euphonium, the last thing we need is more yuri bait, so while it’s probably unlikely that this goes as far as we’d like it to go, something along the lines of a female-focused Yuri!!! on Ice would be great. But even if Carole & Tuesday doesn’t end up being more than a romantic two-girl friendship, it looks like this anime might end up being one of the best shows of the season anyway. 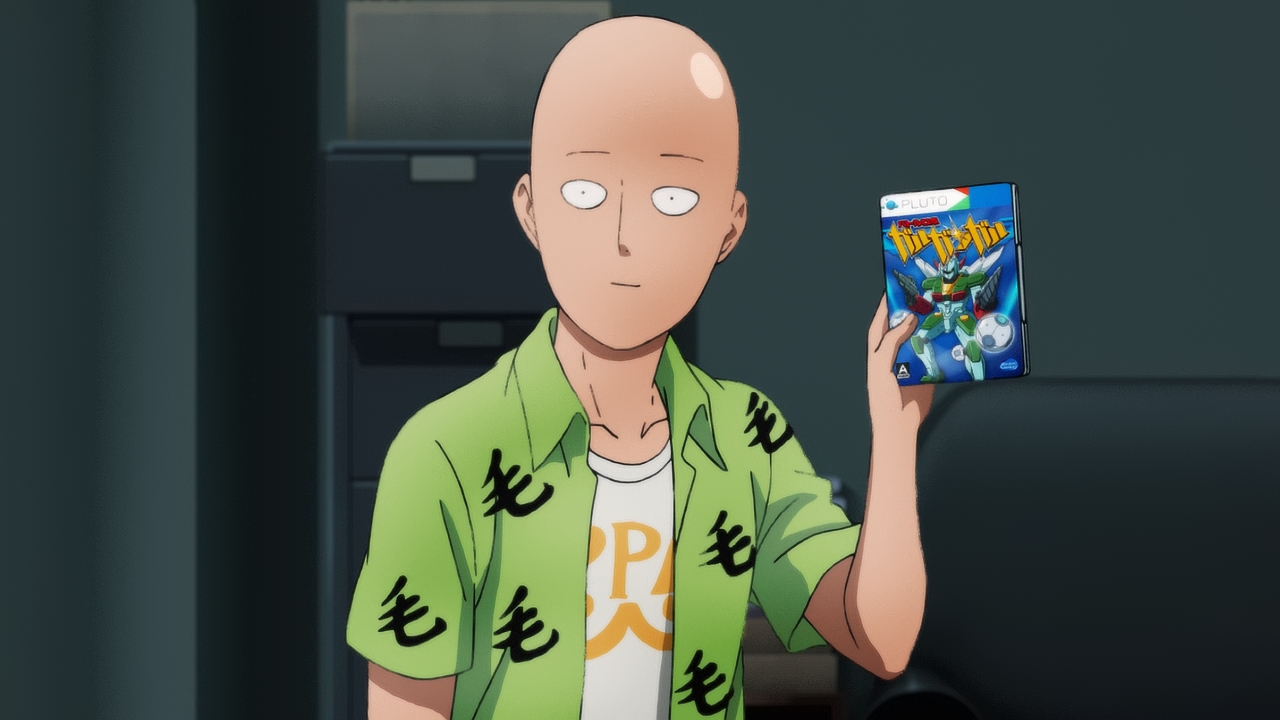 Three-and-a-half years ago, One Punch Man arrived on the scene with the impact seen in one of his punches, and it instantly became a mega-hit, setting expectations insanely high for the second season. Well, it’s only been one episode, but I’d say that things are off to a shaky start. When the production of the second season of One Punch Man moved from Madhouse to J.C.Staff, I’ll admit that I was a little worried about a potential drop in quality for a second season, and as it turns out, this isn’t quite on the same level as season one.

The comedy, the action, the animation, the music, the vibe, season one had everything you could ever want in an action anime, and… not a lot of those elements were on display in this first episode. Visually, this anime looks like a noticeable step-down from the insanely good animation we saw in season one, and while there were some funny moments to be found in this episode, I wasn’t really feeling that same magic that the series boasted before. Genos is the one doing the fighting in this episode, so Saitama is left mostly being the average guy that brings the comedy. As anyone who saw the first season can attest, he does this extremely well, yet too much time was spent on another hero, and I wanted to see Saitama a little more involved than he was here. Still, there were some entertaining moments in this first episode, and I’m just glad to see these characters again.

The story is shaping up nicely enough, and the return of most of the characters from season one should be really nice. A lot of people are going to dwell on what this second season isn’t, but I’d prefer to focus on what it is. To me, it’s still an enjoyable action anime, and while it’s missing that ridiculous eye-candy we got used to from before, it’s still pretty fun. 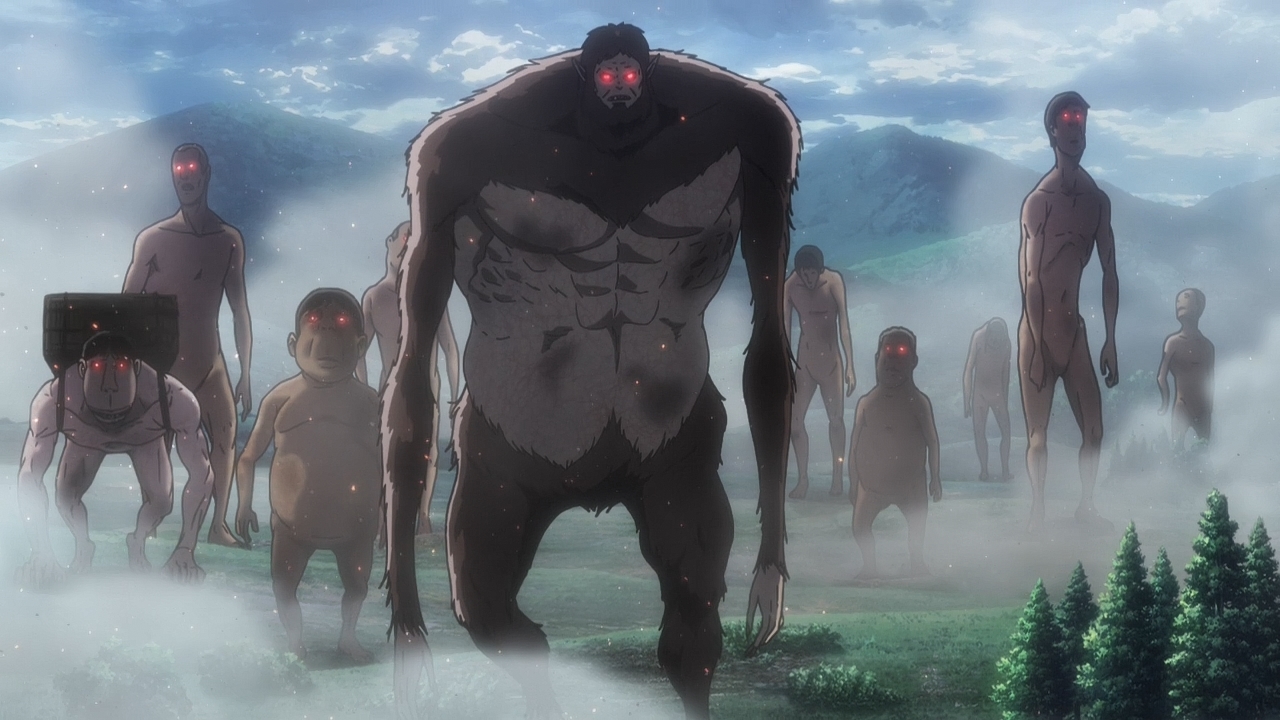 It’s only been six months since the end of the first part of the third season of Shingeki no Kyojin, but it feels a lot longer than that. Compared to the first two seasons, season three felt like a bit of a ketdown, mostly due to it having less of what made the series seem special in the first place (humans vs. titans battles), but I don’t feel like that’s going to be the case this season, if this first episode is any indication.

Right off the bat, SnK wastes no time in giving fans what they’re probably looking for: human versus Titan conflict. Well, the real battle begins next episode, though, this episode was more about the build-up, and we did get to see someone die, as Reiner and the Beast Titan show up to make the humans’ life even worse. First episode back and we’re already getting to the good stuff? Color me hyped. 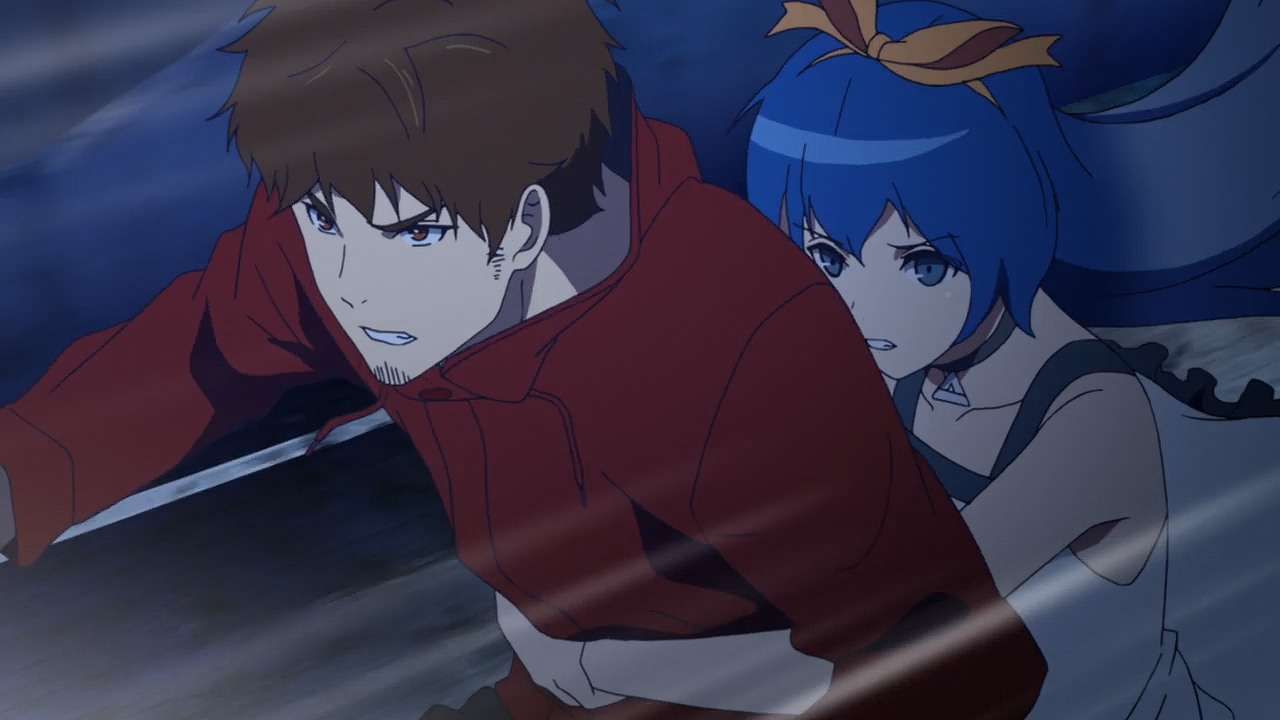 In case you haven’t noticed by now, this season kind of sucks, so an anime like Shoumetsu Toshi finds a way to be included in our post. What initially attracted me to this show was the fact that Madhouse was the studio behind this, but if the first episode is any indication, the studio behind Death Note, the first season of One Punch Man, and A Place Further Than the Universe may have a stinker on their hands…

It’s still very early, yet the story doesn’t seem that promising to me. Apparently, this is an anime adaptation of a mobile game, so that explains a lot, and on top of having what seems to be a mediocre story, it also looks… not so hot. This is Madhouse we’re talking about, so I don’t know what to make of it. All I know is, first impressions are everything, and this anime definitely didn’t make a good one. Perhaps the story will pan out and the animation will become more consistent, but stumbling out of the gates like this doesn’t fill me with a lot of confidence that this anime is capable of doing that.

If this season wasn’t so shallow, there’s a good chance I never would’ve picked up Shoumetsu Toshi at all, and chances are that I’ll drop this show sooner rather than later. On the bright side, at least we get to listen to the dulcet tones of HanaKana and Tomokazu Sugita, so at least your ears can somewhat enjoy themselves while you’re cursing yourself for wasting your time with this show. In conclusion, it’s probably only a matter of time before I drop this anime. I went in blind expecting Madhouse quality, but this isn’t what I signed up for, so even if this anime season sucks, I don’t want to hate-watch this just for the sake of filling out the Final Thoughts post in a few months. 😛