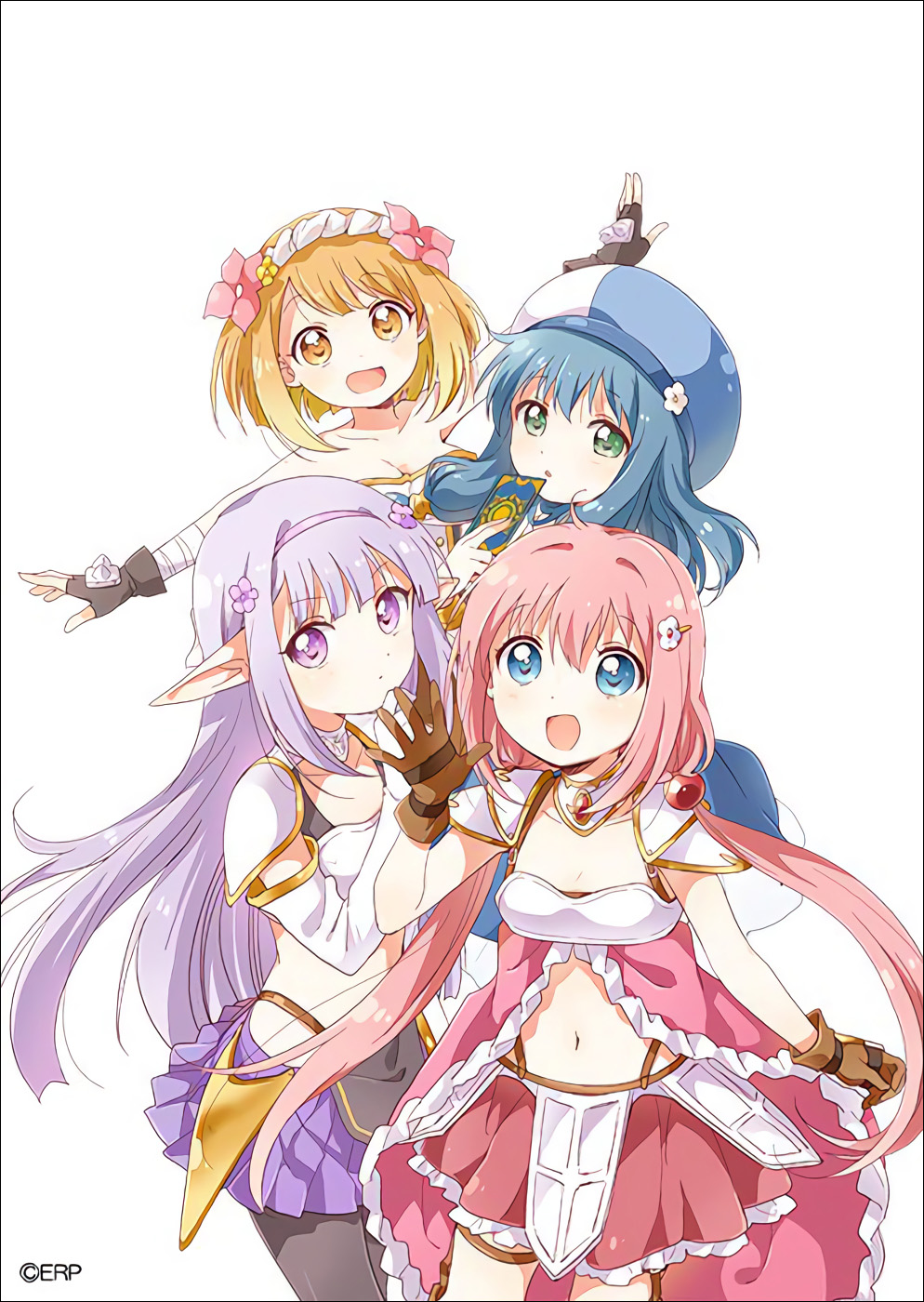 Just when you thought that the winter season was over, along comes YuriReviews with another review. This time, it’s all about cute girls doing magical things, and by that, I mean Endro~!.

Synopsis: Naral Island, a continent with swords and magic in which humans and monsters coexist. The terrible Demon King lives there. In ancient times, the first-generation hero defeated the Demon King. Over the many successive generations since then, the Demon King has been resurrected, and the hero who opposes him has likewise reappeared. Girls attend a school for adventurers in order to defeat the Demon King when he appears again.

I think what the world needs more of is variety in slice of life anime. Most of the time, these shows take place in school, but every once in a while, shows like Endro~! come along and change things up. In Endro~!‘s case, a fantasy setting is what’s going on, and that ends up being one of the more enjoyable aspects of this anime. Of course, Endro~! doesn’t take itself or its setting that seriously, and school still plays a role, so it’s far from a total departure from established norm. Still, I enjoyed the fantasy elements of this show.

A party of four girls (a hero, a priest, a warrior, and a mage) attending a school for adventurers sounds fairly promising, and things only get more interesting when the Demon Lord ends up being their new teacher. That sounds like a far cry from that synopsis up there, and it definitely is, but my biggest problem was that things occasionally seemed a little boring to me.

I think that these moments happened for me when the show took a step away from the fantasy, such as in episode ten when the snowstorm causes the girls to take shelter, which results in everyone drifting off into dreams. Or the melon eating contest in episode seven. To me, it didn’t seem like the show had enough charm to carry it through these slower episodes, so I was a little disappointed by that. I think this not being your standard SoL anime raised my expectations somewhat, and those expectations weren’t always met…

“Overall, Endro~! is a pretty fun little fantasy slice of life that I doubt will really wow anyone, but it has some quality characters, and I think the comedy should be adequate enough to satiate fans of the genre.“

However, I’d say that there were other times when this show was a lot of fun. I thought that episodes three and four were quite entertaining, so I guess you can say that I especially liked it when this anime really played up the fantasy elements. For most of the season, the conflict between the girls and the Demon Lord seems like an afterthought, but it eventually does come to a head… and it plays out in unpredictable fashion, even though all ends well.

So I appreciate Endro~! being a bit different than your typical slice of life anime, and I think that ends up being one of its biggest strengths and weaknesses. Fantasy fans may not love it, yet I think the story is still fairly entertaining for an anime of this kind.

Moving on to the characters, I’d say this was actually a pretty good cast. The girls might come off as all too familiar personality types, yet that didn’t take away from my entertainment, and I feel like the cast is definitely comparable to most mid-tier slice of anime out there.

Speaking of character types, in Endro~!, we have a hero (Yusha), a priest (Seiran), a warrior (Fai), a mage (Mei), and there’s the Demon Lord (Mao). Aside from the few instances where there’s some party-based combat, the character classes don’t really play a major factor, yet I definitely ended up liking these girls.

As a bonus, on a couple of occasions, we see Fai nibbling (more like gnawing, but whatever) on Seiran’s ear as she sleeps. That’s as much yuri as we get from the four main girls, but don’t fret, more about the yuri in a minute.

One thing these four girls aren’t lacking is charm. Yusha comes across as your standard anime protagonist, but she’s actually an entertaining one that kind of reminded me of Akari from Yuru Yuri. Of course, she wasn’t as entertaining as Akarin, yet Yusha is still a lot of fun.

Seiren’s the serious one that is very much like Aya (KinMoza) and Ruki (Comic Girls), so she’s really easy to like.

Every party needs a prankster, and in this anime, Mei kind of fits the bill. She’s a master of Cartado (the art of using magical cards), and her obsession with Cartado is her schtick, although I never grew tired of it. And Fai has a big appetite to go along with her big boobs, so, yeah, she’s another good character. 😛

And then there’s Mao, who may actually be my favorite character in the entire show. This tiny Demon Lord reminded me a lot of Satania from Gabriel DropOut, and she was almost always fun to watch. Not only that, similar to Yusha, Mao seems to have her own admirer as well. I’m not even sure her admirer was named, but she’s also a teacher at the adventurer school, and her and Mao usually go out drinking together. There isn’t that much more to it than that, but if you needed yet another reason to like Mao, there you go.

Which brings me to Rona. While I like that her long-held admiration for the hero leads to her essentially being this show’s version of a yuri character, her presence kind of contributes to that departure from the more fun fantasy aspects of the show, so I wasn’t the biggest fan of hers. Compared to the other four girls (and Mao), I think she’s lacking in charisma, and those yuri vibes she gives off? They weren’t strong enough for me to overlook the negatives, which is unfortunate.

Lastly, Chibi is adorable. That is all. 😛

When you think of slice of life anime, there’s a good chance that you think of Studio Gokumi, which is right up there with Doga Kobo in terms of supplying us with an endless assortment of cute anime. Despite the subject matter, Endro~! visually isn’t that different from other slice of life anime. It’s colorful and super cute, so even though I don’t think it looks as nice as something like Tonari no Kyuuketsuki-san, it’s enough, and Namori’s cute character designs make things all the better.

The battle scenes aren’t anything to write home about, but you don’t typically find fight scenes in these anime anyway, so it’s okay that they’re rather short and uneventful. To sum it up, there isn’t a whole lot separating these visuals from that of every other slice of life out there, so I’d say a score of 6 is just fine.

Despite being far more fantasy-oriented than your typical slice of life anime, I felt like the music in Endro~! wasn’t that much more noticeable than other shows of this type. Only on a few occasions did it really stand out to me, so that’s a few more times than I’m used to with other cute girls doing cute things anime.

And I don’t know if it’s just me, but the main cast sounds exactly like I imagined they would. That probably has a lot to do with the character types, but still, the casting was on point.

Overall, Endro~! is a pretty fun little fantasy slice of life that I doubt will really wow anyone, but it has some quality characters, and I think the comedy should be adequate enough to satiate fans of the genre. It would’ve been nice to have more yuri, but other than that, this is still some decent entertainment.