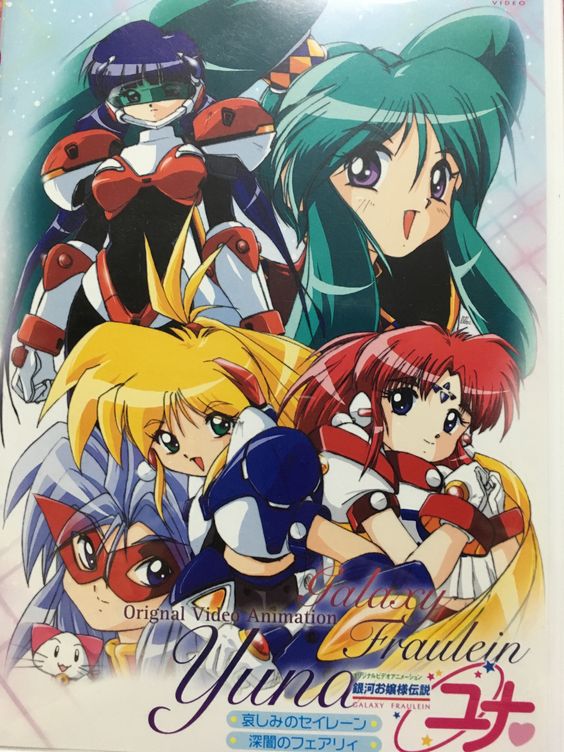 Thanks to a suggestion from our Facebook page, todays review is an oldie. Similar to Fight!! Iczer-1, Galaxy Fraulein Yuna was made before the turn of the millennium, but old-school anime can sometimes be worth your time. Is this one of those anime? Hmmm…

Synopsis: Yuna Kagurazaka won the interstellar Galaxy Fraulein contest to become the Guardian of the Light. After defeating several threats to galactic peace (As seen in the PC Engine games), old enemies have framed Yuna for attacking and demolishing her hometown. Yuna’s friends now must attempt to rescue her from her pending execution, with comedic results.

Galaxy Fraulein Yuna started life as a game for the TurboGrafx-16 way back in 1992. Eventually, that spawned a couple of anime OVAs, so here we are…

Story-wise, the biggest problem with this anime is twofold. One, there’s very little setup to the story. We hear about Yuna having already twice saved the galaxy, but that’s about it for the backstory. I’d imagine that those few people who’ve played the games going into this would have a better understanding of the world and its characters, however, for the rest of us, I feel like we’re missing out on some important information. Two, with only two episodes, there just isn’t enough time to set up and deliver a very worthwhile story, so this definitely feels rushed.

I think this anime certainly could’ve been made into a full-length anime season with twelve episodes, and that probably would have solved the problem with the pacing. It’s unfortunate that this is so short, because there are some good things about this anime, and despite the short running time, Galaxy Fraulein Yuna is actually quite entertaining.

“Well, it’s only subtext, and it’s only through her words, not exactly her actions, but I wouldn’t be that surprised at all if you told me that Yuna was secretly a raging lesbian. Just sayin’.“

This is a lighthearted comedy, so there’s no shortage of jokes being cracked, and the humor is definitely one of the bright spots of this show. With only two episodes, there’s no time to mess around, so the story’s very straightforward and more or less your standard sci-fi anime fare. That means the story is predictable, and there are no shocking plot twists or anything like that, though, the marriage of magical girl and mecha is something I never knew I always wanted! Well, we only see the giant mecha at the very end, but that’s something we need to see more of in present-day anime. Powered armor and stuff like that is nice, yet there’s just no replacement for giant robots.

Overall, you get pretty much what you’d expect out of the story. It’s simple and to-the-point, yet it manages to still be somewhat entertaining, and that’s about all you can ask for. Even though I haven’t seen it myself, there’s a second Galaxy Fraulein Yuna OVA, so if you’re really interested in the story, I’d probably recommend that as well as the games, if you can manage to find them.

As one of the few characters that actually gets significant attention, Yuna’s not only the savior of the galaxy (twice!), yuri fans will be pleased to know that she’s the main source of the yuri in this show. Well, it’s only subtext, and it’s only through her words, not exactly her actions, but I wouldn’t be that surprised at all if you told me that Yuna was secretly a raging lesbian. Just sayin’. She’s a hardcore fan of Polylina, her “one and only”, and Yuna seems all too content when Misaki arrests her and places her in cuffs, so there you go. 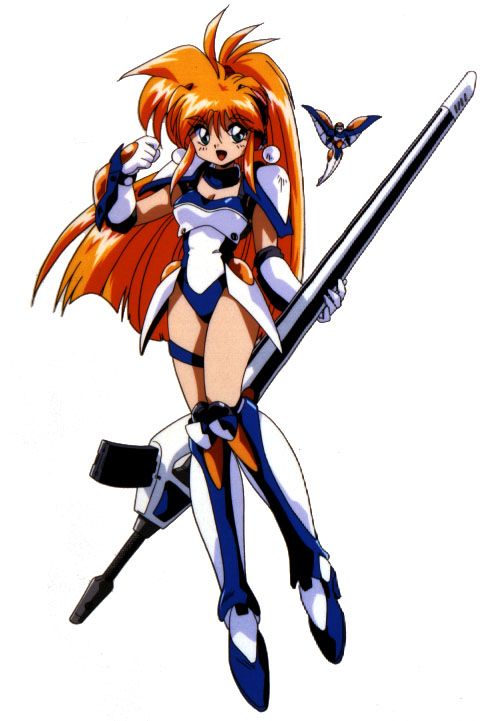 She may not be the titular character, but Yuri is just so over-the-top and entertaining that there’s no wonder she was far and away my favorite character. Her thing is that she eats. A lot. In most of her scenes, she’s accompanied by some sort of food, yet I never really grew tired of that trait of hers. Also, Yuri is some sort of android or something, but since we learn pretty much nothing about her, the details of her backstory remain unknown to me.

Fraulein D / Devil Fraulein was your standard villain, right down to the “this is my final form!” schtick. Apparently, her and Yuna have some sort of history, but since I haven’t played the games, I have no idea what that entails. Anyway, she’s far from the only character that’s underdeveloped/unknown to Yuna newcomers.

Apparently, Polylina’s real name is Liva, and she’s actually a friend of Yuna’s from school, though, we only see her alter ego in this OVA. The entire Matrix of Light makes only a couple of brief cameos, and that’s it. We get no explanation as to who they are or why they’re there. Misaki’s a pretty nondescript badass that does Yuna no favors, and I had no idea who Princess Mirage was, but all I know is that she’s apparently pretty powerful. And I don’t know why Shiori does everything so slowly, but I don’t even care. She’s adorable.

It sucks that this anime is so short, because there are some interesting characters here that you want to get to know better, but we just don’t get the chance. Perhaps I’ll check out the OVA sequel to see if it’s worth another review, either a full one or as part of one of our Short Anime Review Roundups.

When it comes to the animation, I think this anime holds its own, for the time it was released. I don’t know about you, but it seems to me that there’s just something nice about the art of old-school anime like this one. Compared to modern day anime, it often seems like more care was put into the various elements, or like there’s a better sense of personality that comes across in the artwork. Maybe that’s just due to the shift in animation techniques and the now ubiquitous use of CG, but I generally like the look of older anime like this one. There isn’t a ton of action in this OVA, and what action there is is adequate, if unspectacular.

As for the sound, that is one cute and catchy OP. The music mostly has that retro vibe you associate with anime this old, and whether it’s playful and upbeat or more fitting of the action scenes, I think it’s actually pretty good. The same can be said of the sound effects and voice acting. It’s probably just bias, but I like to think that voice acting has gotten better over the decades, yet this OVA had plenty of good performances, and I was actually quite impressed by that.

All in all, Galaxy Fraulein Yuna is a short and fun OVA that mixes magical girl and mecha anime into something pretty entertaining. Because of the overly short length and subsequent shortcomings of the story, I feel like this is one of those anime where you just put it on, turn off your brain, and just sit back and enjoy the goofiness of it all. The hints of yuri could’ve been stronger, and they always seem to be played for laughs, but they’re there, and that’s what counts. This project probably would’ve better served being much longer than just two episodes, however, those two episodes are entertaining enough, so it’s not all that bad.