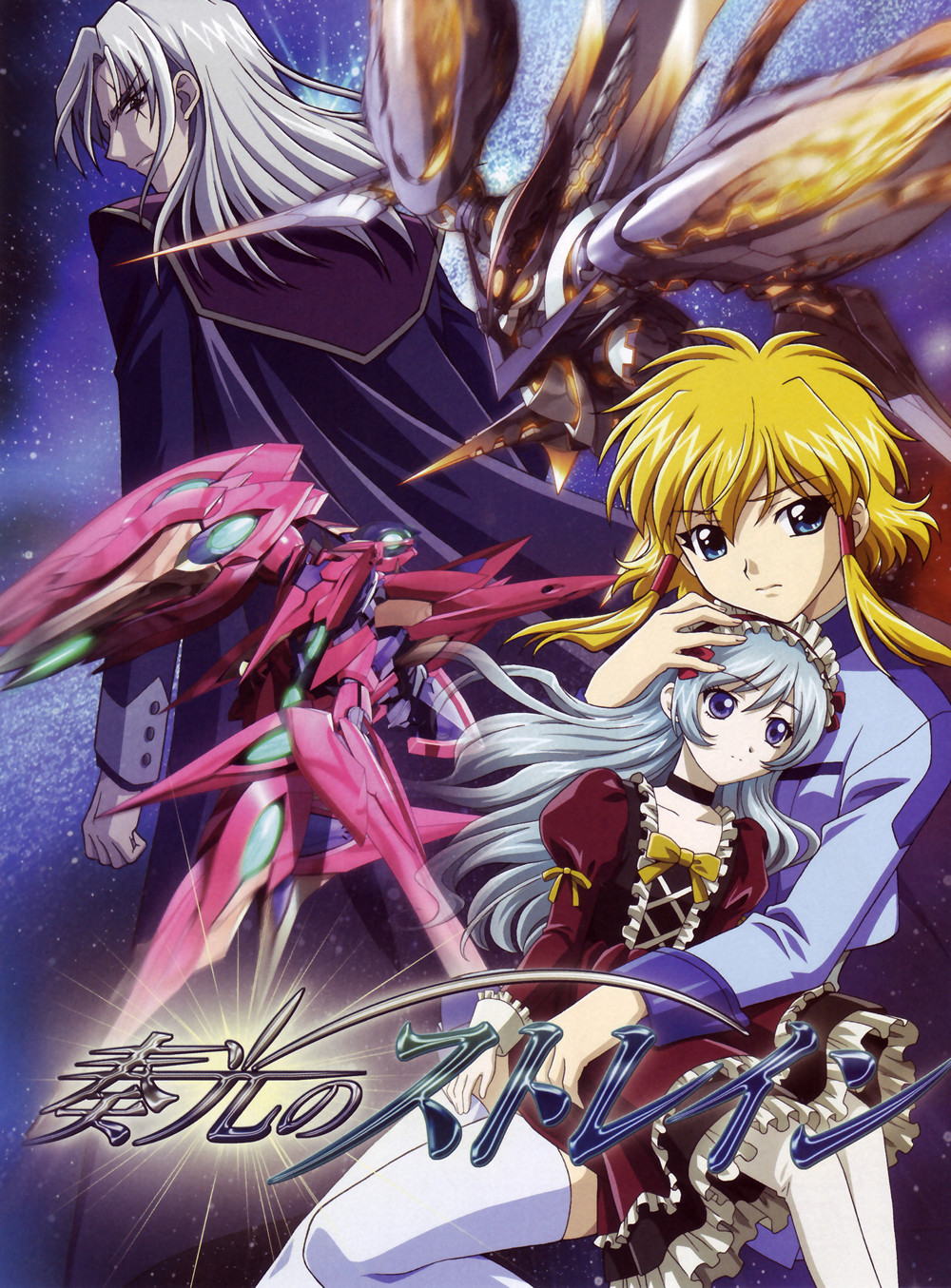 I think it was last year that a tipster hinted that Soukou no Strain would be of interest to me, and lo and behold, here we are with a review. Soukou no Strain does indeed have a little something for us, but is that enough to cover for thirteen episodes worth of hot mecha on mecha action?

Synopsis: In the distant future, mankind is divided into two factions: Union and Deague. They have waged a war against each other for so long that no one remembers when it first began. The backbone of the Union military is the manned weapons system Strain, while the Deague uses an unmanned version, the Tumoru.

Sara Werec, the daughter of a respectable family, is a 16-yearold girl who attends Grapera Space Armed Soldier Academy located in the Cranial Solar System, where she is training to become a full-fledged Reasoner (a Strain pilot).

Her brother, Ralph Werec, had been sent to the frontline 130 light-years away to accomplish a special mission when she was 11 years old, a distance that requires 400 years of objective time to traverse by even the fastest Union spacecraft. However, in accordance with the theory of relativity, this corresponds to only two subjective years (time as experienced by those within the spacecraft).

The two of them had lost their parents when they were young and the bond between the two is very close. It is Sara’s dearest wish to be reunited with her brother. To do that, she must travel to the battlefield where he is.

One day, Sara’s planet is suddenly assaulted by Deague forces. To her surprise, her brother, Ralph, turns out to be one of the raiders who successfully kidnap a mysterious girl sleeping in a capsule.

In order to find the truth, Sara gets in a Strain and chases after him. However, she is attacked by Ralph, and the Mimic, a copy of the pilot’s brain which is essential to controlling the Strain, is damaged.

That’s quite a synopsis, isn’t it? But for Soukou no Strain, the relationship between Sara and Ralph is the foundation that the story is built upon, so as interesting as the Union versus Deague war is, that takes a backseat to the sibling rivalry. And for me, that’s one of the issues I had with the story.

After a pretty good first episode, the first two-thirds of the season are kind of okay. We see a lot of Sara climbing the ranks of the Union military, and while that has the benefit of producing plenty of opportunities for character development for Sara, not too much happens in regards to Sara and Ralph. We see some skirmishes between the Union and Deague—including attacks by Ralph himself—but I think the war between those factions is disappointing, and I would have liked to have seen the conflict between Sara and Ralph escalate in a faster manner.

“At one point, Lavinia even assaults surprises Sara in the shower, but much to her dismay, it wasn’t Sara. Hey, we still got a yuri kiss out of it, so I’m not complaining!“

However, caught between both Sara and Ralph is Emily, and I won’t spoil what that story thread entails, but it’s pretty interesting stuff, even if you do have to wait a long time for some backstory and explanation. By the end, most everything comes to make sense, and I thought the last four episodes are quite good, so I did enjoy that. And unlike some anime, there is an actual ending (though the light speed travel involved can be debated), so that’s another positive.

All in all, I think the pacing could’ve been improved a little bit around the middle, yet the story felt pretty compelling, and it delivered some feels along the way. It wasn’t the greatest thing ever, but it certainly wasn’t a train wreck, and I was mostly pleased with how it all turned out~ 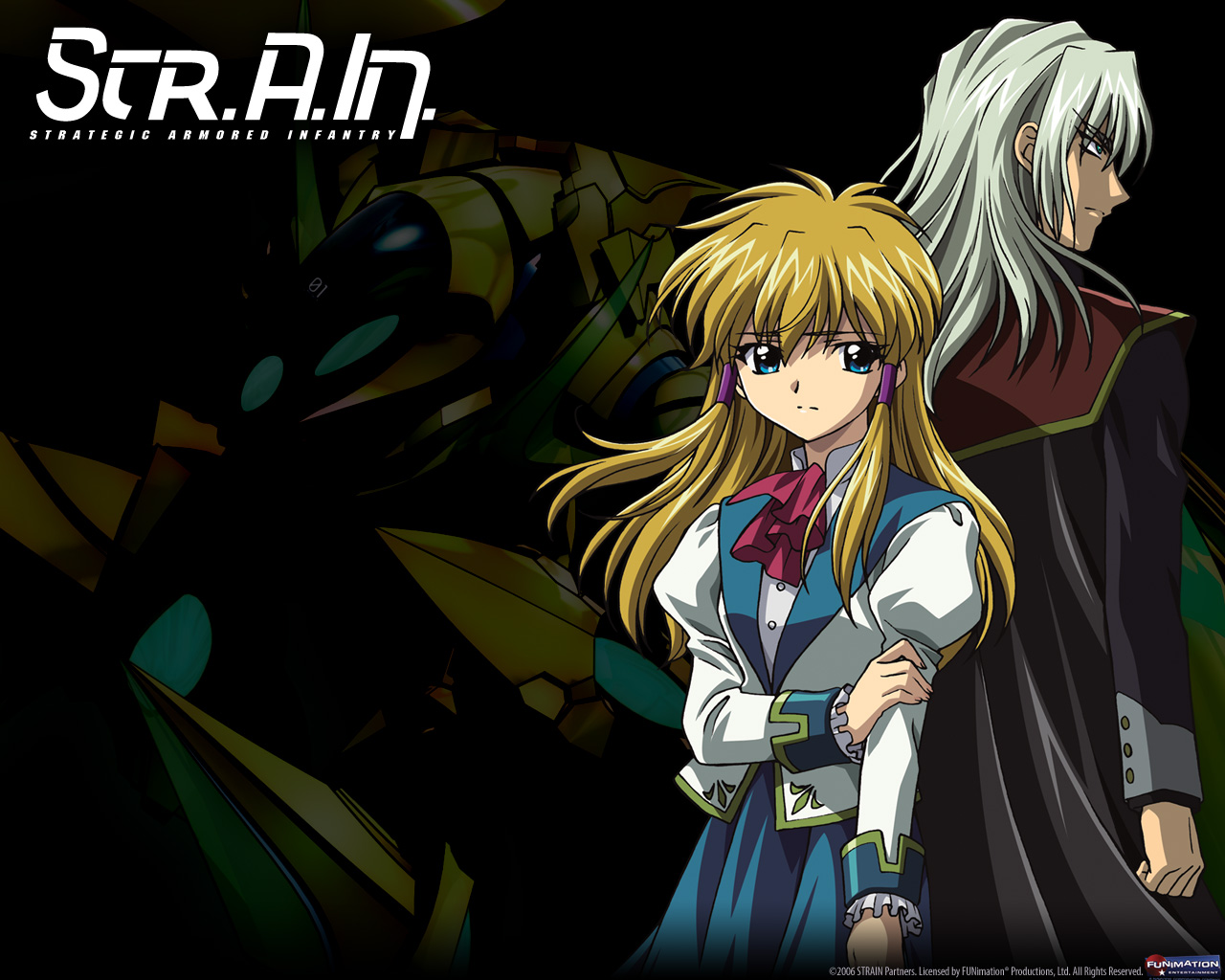 Now that we got that out of the way, let’s talk a little bit about the characters.

From cute little sister that idolized her brother to battle hardened soldier tasked to kill said brother, Sara’s journey was definitely one of the bright spots of Soukou no Strain. What I really liked about her was how independent and composed she usually was. Even in the face of abuse, she never so much as lifted a finger to harm those so-called allies who were harming her, which is in stark contast to how Ralph conducted business. As a result, her personality isn’t very strong, though, the strong, silent-type persona simply works for her. Speaking of Ralph…

For most of the season, Ralph is an enigma whose motivations aren’t made clear, yet his transformation from loving brother to vengeful villain is fairly well done, in my opinion. Eventually, once his reasoning for doing what he’s done is made clear, you can kind of understand it, and he’s made out to be a little more of a sympathetic figure, yet he never loses that edge that comes with being the villain. I would have preferred if there was some (or any) dialogue between him and Sara prior to their face-to-face in episode eight, and his silence does him no favors in shedding the cliché bad guy role, though, he’s a good foil for Sara, and things eventually play out pretty well. 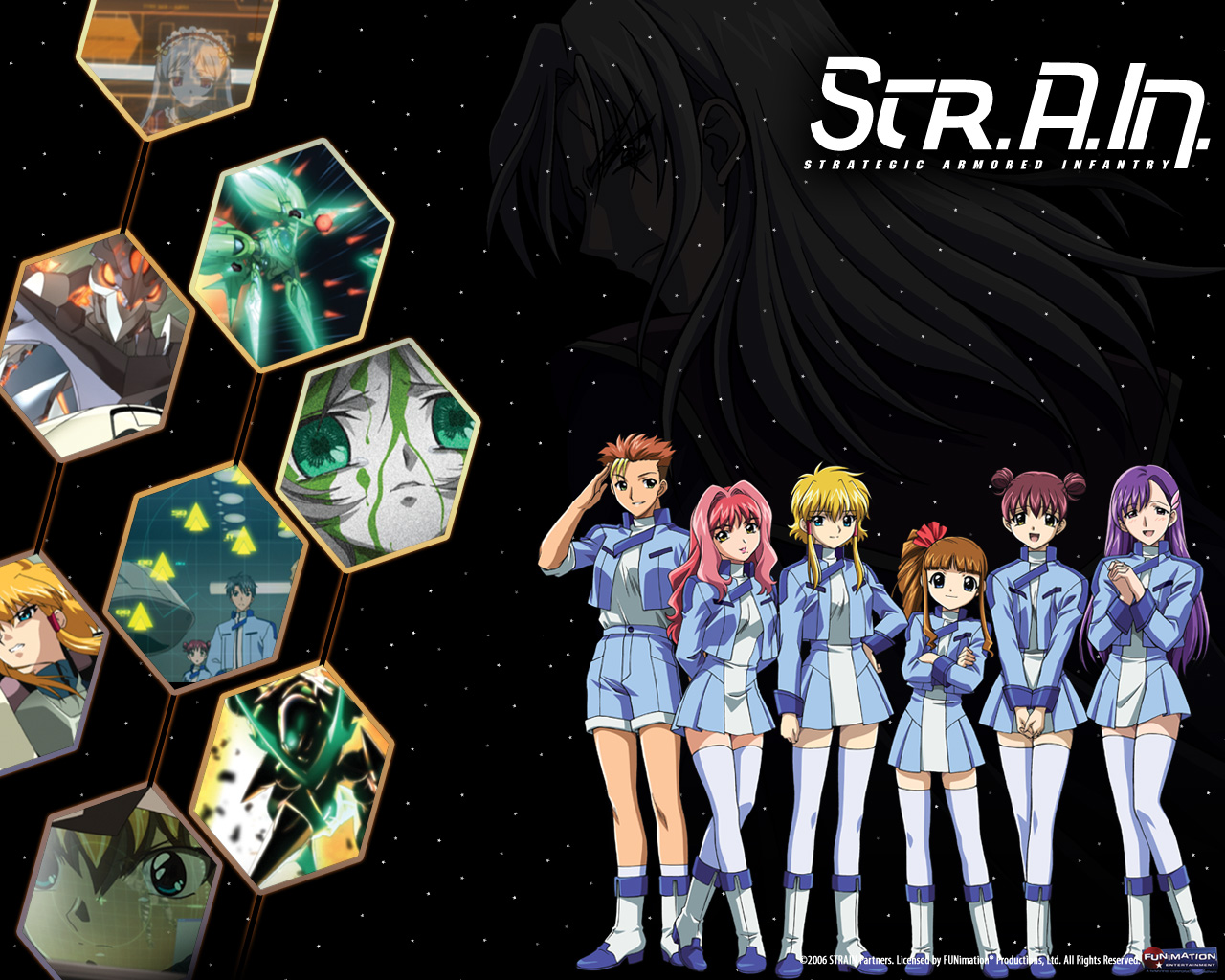 Along the way, we meet many characters that fight alongside Sara, but the ones that made the biggest impressions on me are from the Spatial Armor Division, and especially Lottie in particular. She was really the first girl that made an effort to get to know Sara, and although Lottie retains a bit of a rivalry with Sara, she ends up being a great ally and friend to her, so Lottie was definitely one of my favorite characters.

For me, one of the most satisfying things was seeing some of the girls that tormented Sara, die. I know that sounds cruel, but so were they, and I guess you can say it was karma at work. Of course, that didn’t stop those girls from continuing their harrassment of Sara (which I think went on for far too long), but for a brief moment, the tables were turned, and I think it was pretty great. Actually, over the course of the season, Sara sees a lot of her comrades bite the bullet, including a couple of male love interests. *cheering erupts among the YR faithful* 😀

Calm down there, kiddos. That doesn’t automatically mean that Sara is ripe for the picking for one of the many female characters, although that situation definitely does come up. What I’m talking about is the presence of Lavinia, who’s a Strain pilot that we get introduced to in episode four. She’s this series’ yuri character, and between episodes four and seven, Lavinia does her best to get closer to Sara, so she’s obviously one of the highlights of the season. In fact, episode seven in particular was one of my favorites, and that’s because essentially the entire episode is devoted to Lavinia’s many plots to make Sara hers. Of course, things don’t exactly go as planned, though, this was a lighter episode that I feel like was a nice break from the norm.

At one point, Lavinia even assaults surprises Sara in the shower, but much to her dismay, it wasn’t Sara. Hey, we still got a yuri kiss out of it, so I’m not complaining! Before starting this show, I assumed something would develop between Sara and Emily (that doll she was holding), but that was a red herring, and it was Lavinia that provided the yuri, which was probably for the best. 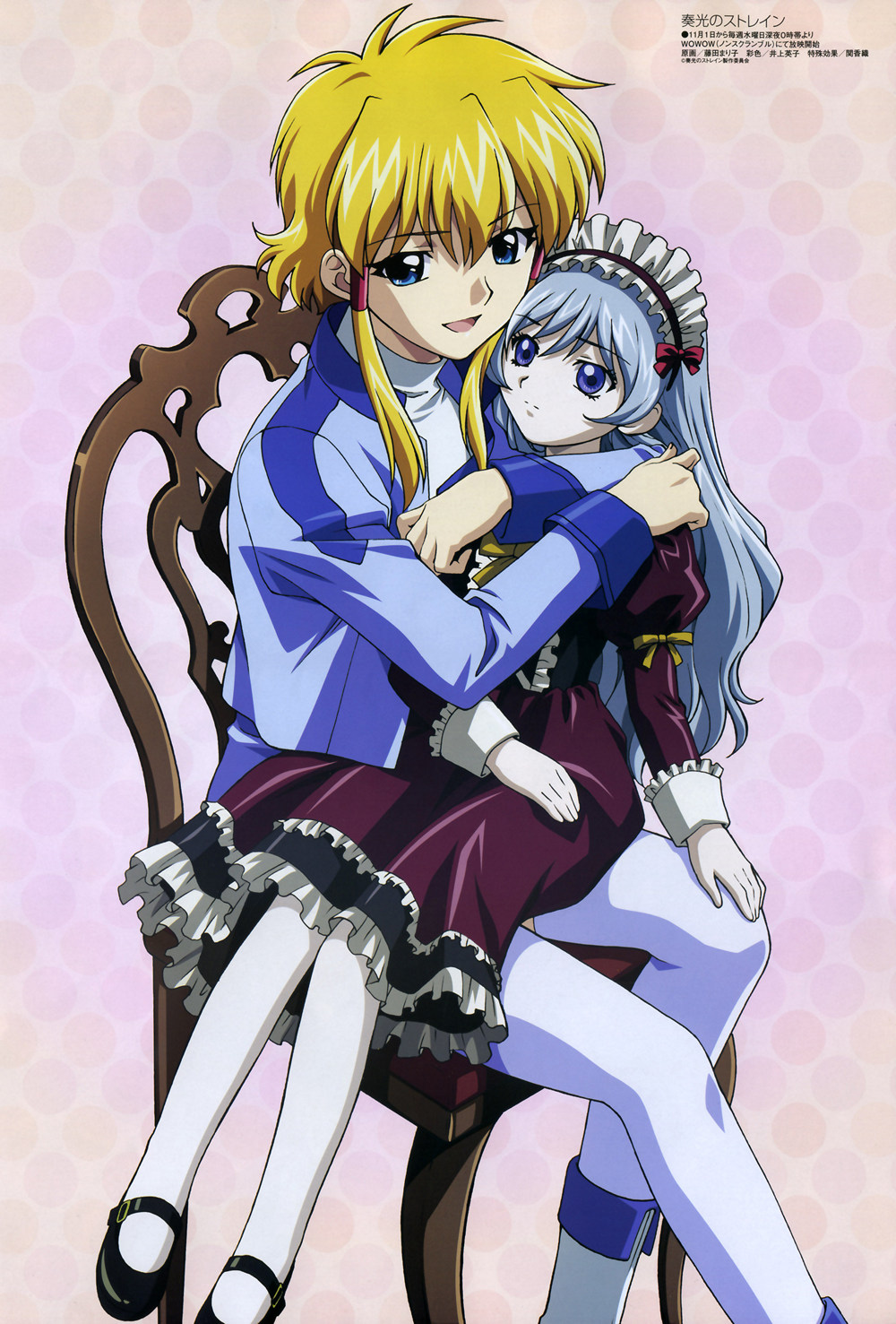 Some of the other characters that play smaller roles still make positive impressions (like Melchi and Carmichael, for example), and overall, the supporting characters are alright. However, at the end of the day, everything comes back to Sara and Ralph. Sister and brother, protagonist and antagonist, hero and villain, however you want to slice it, their relationship is what most makes this anime compelling. Them, along with the many supporting characters, end up being pretty solid, so even though the characters of this show might not be great, I think they’re good enough to still be enjoyed by most people.

Moving on to the animation, I feel like Soukou no Strain was a mostly positive experience. Although there were really only four different mecha designs, almost all of them were pretty sleek and sexy, with the exception being the Gambees that the cadets pilot. The three variations of Strain were some nice mecha designs, and it’s important to note that these are CG models, yet I think they looked pretty good and moved very well, and they didn’t really look too out of place among the more standard 2D art.

The TUMORs—small drone-like mechanisms belonging to the Deague—were also usually CG, but on a few occasions, you did notice that they appeared hand-drawn, but either way, they also looked nice and made for an interesting enemy for our heroes to combat. What wasn’t so hot were the CG explosions, which just looked like simple orange/yellow circles. Given how cool the Strains (and the mecha combat in general)looked, seeing that was definitely a let-down. So as a mecha anime, I’d say that this was definitely a winner, especially for a studio that has had some hentai productions in the not so distant past. Oh, and for an anime that has the “ecchi” tag, it didn’t really feel like this anime deserved it.

And for the music, I don’t think it ever stood out as something especially great or anything, yet, on multiple occasions, it did stand out as being nice and complementary. Also, don’t sleep on the voice acting, which is quite nice as well. So even though it might get overlooked in favor of the mecha action, I think the sound in this anime is up there with the other elements of this show.

Overall, I feel like Soukou no Strain is a bit underrated and unknown by a lot of the anime community. It’s actually a pretty good show, and even though the yuri is limited to only one character, that character gets a solid amount of screen time (relative to other yuri characters from other non-yuri shows). The mecha action is good, and in some ways, Soukou no Strain reminds me a bit of Cross Ange, albeit a toned down and more grounded version. So if you’re a mecha fan—or if you’re someone like me that doesn’t like mecha anime but also doesn’t hate it—maybe you should consider giving this anime a go~