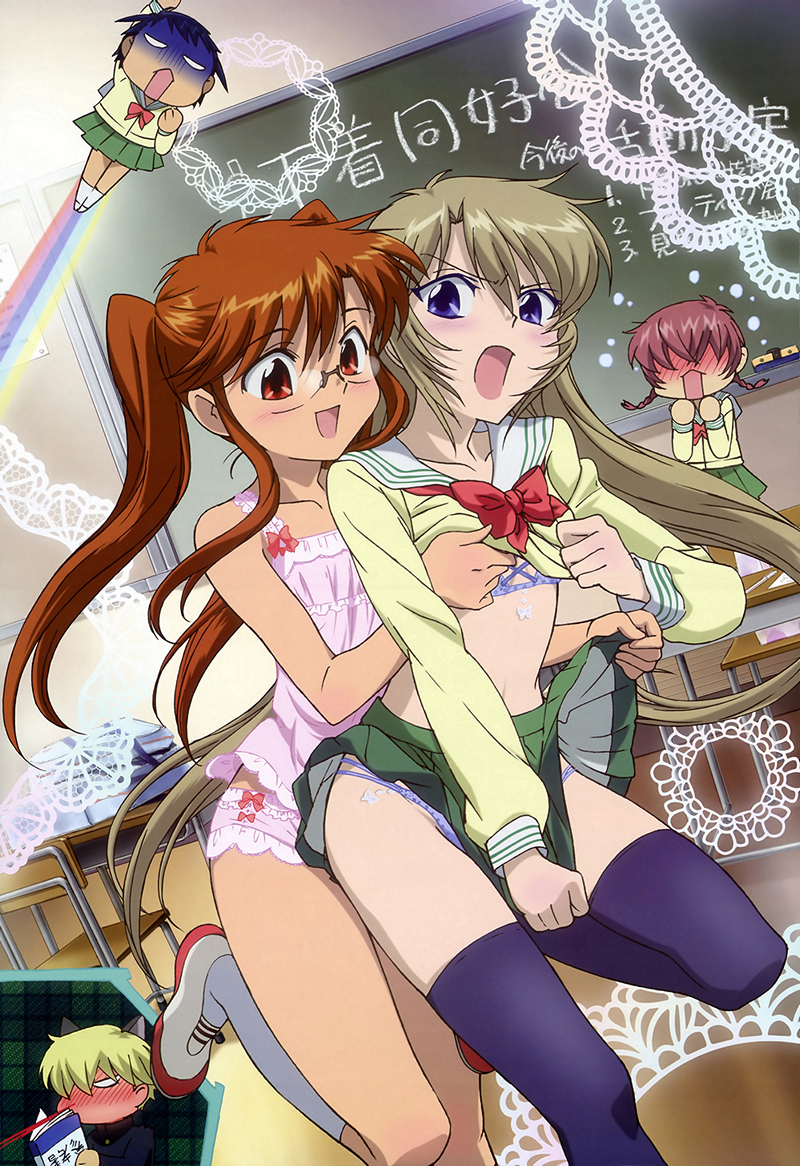 Have you ever thought to yourself, “If only there was someone to help me choose the underwear that’s right for me.”? Yeah, me neither. But that’s basically what Chu-Bra!! is all about. The kicker? We’re talking about middle schoolers.

Synopsis: The story centers on Nayu, a middle school girl who shocks her schoolmates on the first day of school by wearing black lace panties. She likes this kind of underwear, and she tries to “spread the word on the merits of [these kinds of] underwear” via an underwear club with her schoolmates, who are worried about their bodies’ development and which underwear to choose.

An anime about the underwear antics of middle school girls. Let that concept sink in for a moment. You know those anime that make you feel like a total sleazeball while you watch them? You could argue that this is one of those anime.

Now, this isn’t a total loss, and the show sometimes does deal with this subject with some dignity… and then there are other times when it’s just as ecchi as you’re expecting it to be. The Underwear Appreciation Society really is a legitimate group that looks to help girls with all their underwear needs, and over the course of the season, we see Nayu and the society become more accepted by the other students and teachers. So despite what it might sound like, it’s not just some shady excuse for Nayu to prey on others. Still, to me, Chu-Bra!! is overreliant on its one unique story element, and the rest of the story is just underwhelming and lifeless fluff.

But this anime is still about twelve-year-old girls and their underwear habits, so no matter how you want to slice it, you have to question the intentions behind this show. To me, it just doesnt seem like much more than a lame excuse to ogle pubescent girls, and no amount of half-hearted proper club activities can change that. And then there’s the comedy, which is mediocre at best. After a while, Nayu fondling the other girls gets tiring, as does Hiroki becoming embarrassed with all the exposed skin around him and all of the other humor centered around the female anatomy.

“But that’s more blatant fanservice than actual yuri, however, over the course of the season, you get the sense that Haruka may be developing feelings for Nayu, though nothing really comes of that, and it’s eventually just swept under the rug.“

What little story this anime has is aided somewhat by a cast of characters that isn’t all that bad, yet they’re hardly memorable.

As the main character, Nayu is usually front and center, and as you might expect, she’s almost always doing something underwear-related. I like that she genuinely has a love for undergarments, and not just in a lewd way. Given her propensity to get touchy-feely, she’s still a bit of a perv, but she’s a likable one. Yako—and especially Haruka—aren’t as attention-grabbing as Nayu, yet they act as decent counters to Nayu, and when together, the three of them have adequate chemistry. As a group, they sort of remind me of a poor person’s version of the girls from A-Channel, in that they’re certainly not great, but they’re still appealing to a degree.

Being an adult female, Mizuno sees her share of fanservice as well, though her lack of femininity often leads to her incurring Kiyono’s wrath. More often than not, she ends up providing comic relief, and she happens to have a crush on Nayu’s older brother, but that doesn’t get too much play. Aside from Nayu’s brother, Hiroki is the only male in the cast, and his role is predictable. He ends up being so out of place among the girls, and he’s a bit of a tsundere that seemingly has a little crush on Nayu. Still, he’s not very interesting. And then there’s Kiyono, whose has the horrible mindset that if a man doesn’t think that underwear is cute, there’s isn’t any meaning to it. She’s a model and fellow member of the Underwear Appreciation Society, and compared to the other girls, she’s a lot more provocative.

When it comes to the yuri, first and foremost, there’s all of the groping that takes place. In most of these cases, it’s Nayu who’s doing the fondling, and in some cases, her intentions are actually legitimate. She helps the other girls properly adjust their bras and whatnot, but that’s balanced out with her just molesting others, such as Haruka at the onsen. But that’s more blatant fanservice than actual yuri, however, over the course of the season, you get the sense that Haruka may be developing feelings for Nayu, though nothing really comes of that, and it’s eventually just swept under the rug. This is probably what you’d expect to hear about an ecchi anime, yet I was hoping for something a little more substantial.

So I can definitely say that I enjoyed the characters more than the story, but that’s not saying much. As a cast, you can surely do worse than Nayu, Haruka, and Yako, yet I don’t think they have enough personality or charm to propel themselves into the upper echelon of these types of shows. And the cheap yuri fanservice wasn’t enough for me to overlook the rest of this anime’s flaws.

Of course, you’re going to find quite a lot of fanservice in this anime. Panty shots, groping, the obligatory onsen scene, it’s all there, and that ecchiness is the only thing that makes this anime stand out, visually and just in general. The cuteness levels of Chu-Bra!! don’t approach that of proper slice of life anime, yet there’s definitely some cuteness involved, at least until the next dose of fanservice arrives.

In a lot of instances, I don’t even know why we keep this sound category, because shows like this just don’t produce anything remotely memorable or noteworthy. Is there music? Sure. Does it sound like the music of practically every other anime in existence? More or less. So let’s just move on.

At the end of the day, the overt sexualization of these preteens just made me feel uneasy. Are there ecchier shows out there than Chu-Bra!!? Absolutely. But the combination of fanservice and the age of these girls is what really irks me. And even if you can overlook that, this just wasn’t entertaining enough for me, and I was left wanting more meaningful yuri than just some groping. This sort of reminds me a tiny bit of Fate/kaleid liner Prisma☆Illya… just without the magical girls or general entertainment you’d find in that series. 😛