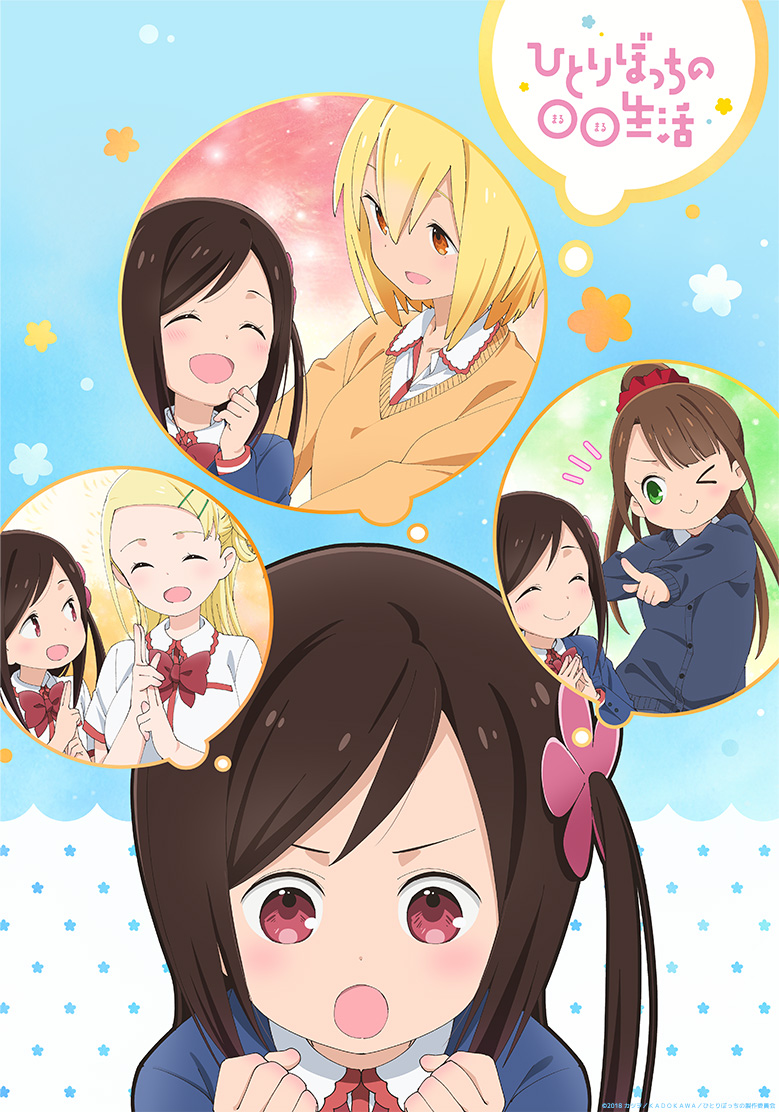 This was another series that readers pointed us towards, even though the yuri here is practically non-existent. Anyway, lack of yuri aside, this was a nice recommendation that ended up being a lot of fun~

Synopsis: Hitori Bocchi suffers from extreme social anxiety, she’s not good at talking to people, takes pretty extreme actions, is surprisingly adept at avoiding people, her legs cramp when she overexerts herself, gets full of herself when alone, will vomit when exposed to extreme tension and often comes up with plans. Now she is entering middle school and her only friend, Yawara Kai, is attending a different school. This leaves Bocchi alone, surrounded by new classmates with whom she must make friends before Kai will talk to her again.

As that synopsis made very clear, Bocchi’s lack of social skills takes center stage in this anime, which reminded me of another anime about a girl with extreme social anxiety, WataMote. But unlike WataMote, Hitoribocchi is more lighthearted and it feels less mean-spirited, so instead of laughing at Bocchi, we’re laughing with her. Well, sometimes. Seeing her melt down in social situations was always hilarious to me, and just in the way the character was handled, the differences between Bocchi and Tomoko from WataMote couldn’t be more different. This isn’t a dark and depressing anime, Hitoribocchi is full of fluff and when you see Bocchi become so happy to actually talk to someone (so happy that she often passes out), you can’t help but feel all warm and fuzzy inside.

I made it sound like Hitoribocchi was a really sappy anime, but I wouldn’t call it sappy, just really cute. Episode seven was a little emotional, but there’s more than enough comedy to keep Bocchi’s quest to befriend the entire class from getting very serious, and maybe it’s just because I like this topic, but I’m not sure there are many other slice of life anime that I’ve found to be funnier than this one.

To some degree, I think a lot of people can relate to Bocchi’s situation, and it was nice to see her overcome her social phobia and become a happier person. At the end of the day, I feel like Hitoribocchi was fun and funny enough to make up for any narrative shortcomings, and this just ended up being one of those feel-good anime that come along every once in a while.

“As mentioned earlier, there really is no yuri, but because the entire cast is comprised of girls, it’s really easy to ship them together.“

Moving on to the characters, I really like these girls.

Starting off with Bocchi, she’s just incredibly sweet and endearing, and given her unfortunate situation, you just want to protect her and see her happy. With that happiness comes the fainting, which further added to her charm. Most of the time, I loved her reactions and how she was so ill equipped to handle having friends. Thinking that your friends are going to forget about you when you don’t see them for a whole day? Adorable. In an anime full of adorable girls, she was head and shoulders above them all in terms of adorableness, and as it stands now, she has a place in our Yuri Anime/Manga/Visual Novel Awards for 2019.

Speaking of cute, Nako is also super cute. Bocchi’s first (besides Kai) and best friend, she’s always so great to Bocchi, despite the somewhat intimidating aura she gives off. Nako’s little battles with Aru were great, as was the way that Teruyo was always afraid of her. I just mentioned her, but Aru was another character that was always fun to watch. Her secret status as the unfortunate girl led to her frenemy status with Nako, which was probably one of the most entertaining aspects of ths show, at least for me.

And how can I forget about Rakita, Bocchi’s very own apprentice? Her ninja obsession was so strange and completely out of left field, yet she fits right in with the other girls in the show. On the surface, it seems kind of mean for Kai to just stop being friends with Bocchi like that, but it’s easy to see that she’s only doing it for Bocchi’s sake, so that she can turn her life around and to better ensure her happiness. I was a little surprised that Kai didn’t play a bigger role and become a mainstay among the cast, but her cameos felt appropriate, and it was great to see her be happy that Bocchi was actually trying and succeeding in making friends.

I think I would have liked to have seen a little more of Teruyo, the timid teacher, because her interactions with Nako were pretty great and were always funny to me. Thankfully, there were other girls that ended up being quality characters as well. Mayo is introduced late in the season, but she was yet another cute character, and her situation slightly resembled Bocchi’s, in that she was lacking in the friend department and was generally lonely (since her parents were always overseas on business). Kako brought a little conflict to the show, and I liked how she was trying to achieve the same thing as Bocchi (becoming stronger), but she was doing so in a completely different manner. Deep down, you know she wants to feel needed and wanted, yet she has that prideful stubbornness that just won’t allow it, and I enjoyed it when she’d always put a halt to Bocchi’s hopes of being friends.

As mentioned earlier, there really is no yuri, but because the entire cast is comprised of girls, it’s really easy to ship them together. Bocchi x Nako, Bocchi x Rakita, Bocchi x Kako, Bocchi x Kai, and Nako x Aru are the ones that are the most obvious. Of course, friendship is at the heart of this anime, but everyone is just so wholesome that it’s no wonder that this is lacking in the yuri department. At the moment, there are only a few illustrations on Dynasty Reader that involve these pairings, but unfortunately, no doujins. Still, for a show with no real yuri, that’s not that bad.

All in all, there’s just so much charisma to go around Hitoribocchi, and and it can’t be understated how important that is for a show like this. Each girl brings a little something different to the table, but they all provide a lot of fun moments, even though you’d prefer to see them be a little more gay. 😛

Animation-wise, this isn’t anything that great, even by slice of life standards. That said, it was great seeing all the different reaction faces, and if you’re looking for cuteness, look no further.

Musically, this was more or less your standard comedy, with whimsical background music that you sometimes notice, however, it doesn’t ultimately make a major difference. But it’s cute and fun and fits the show, and that’s pretty much all you really need for an anime like this. I thought that the sound effects did add a lot to the comedic timing of the show, however.

You’re going to need some yuri goggles for this show, but it’s pretty obvious that Hitoribocchi was just a super cute and fun comedy that will probably please fans of cute girls doing cute things. The genre is really crowded, but I think this anime did enough to stand out from the crowd a little bit, and the characters are also pretty great, so I’d definitely recommend this for slice of life fans.