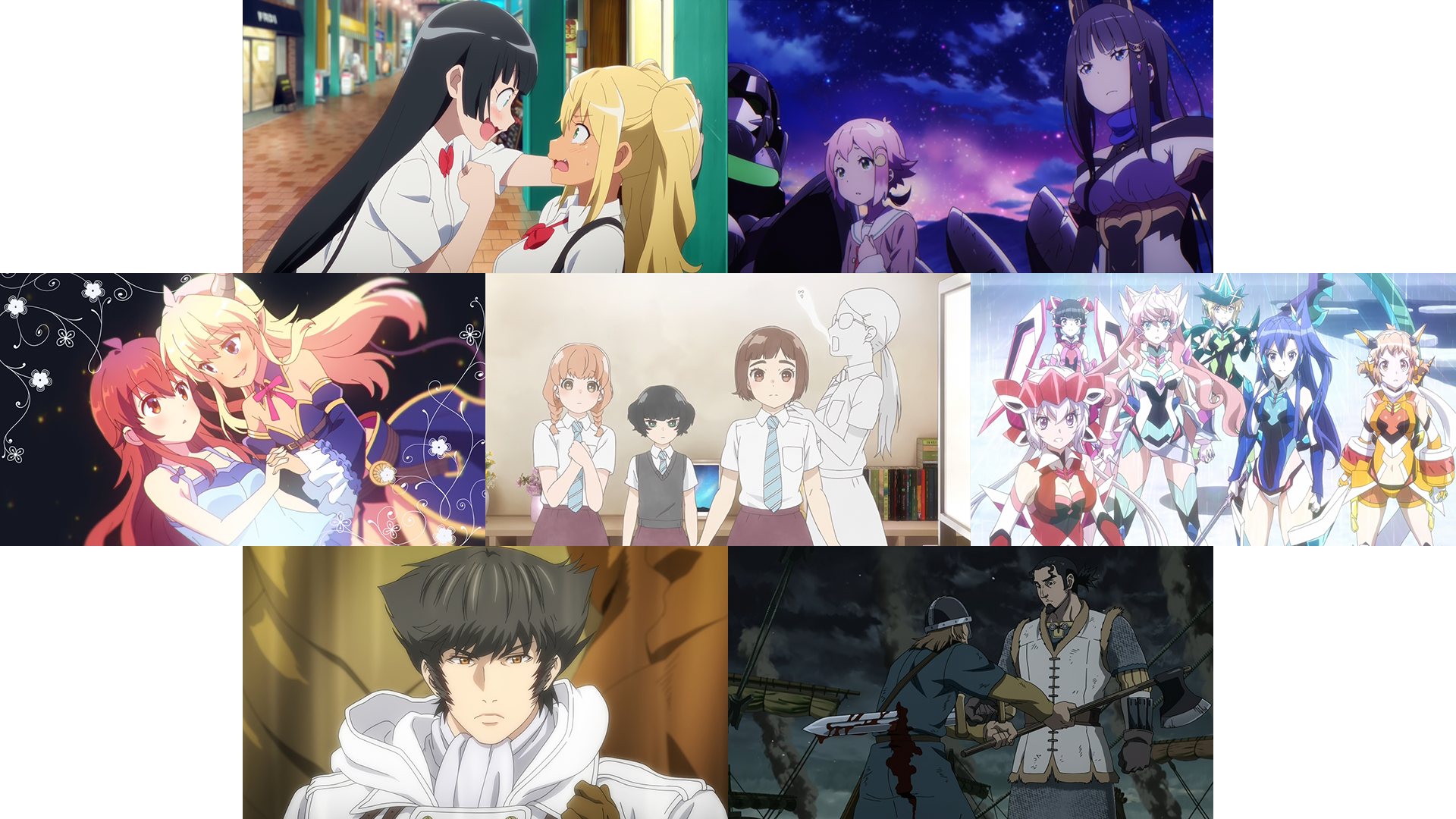 It’s that time of the year again, so enjoy our First Impressions of the 2019 summer anime season that just started~ 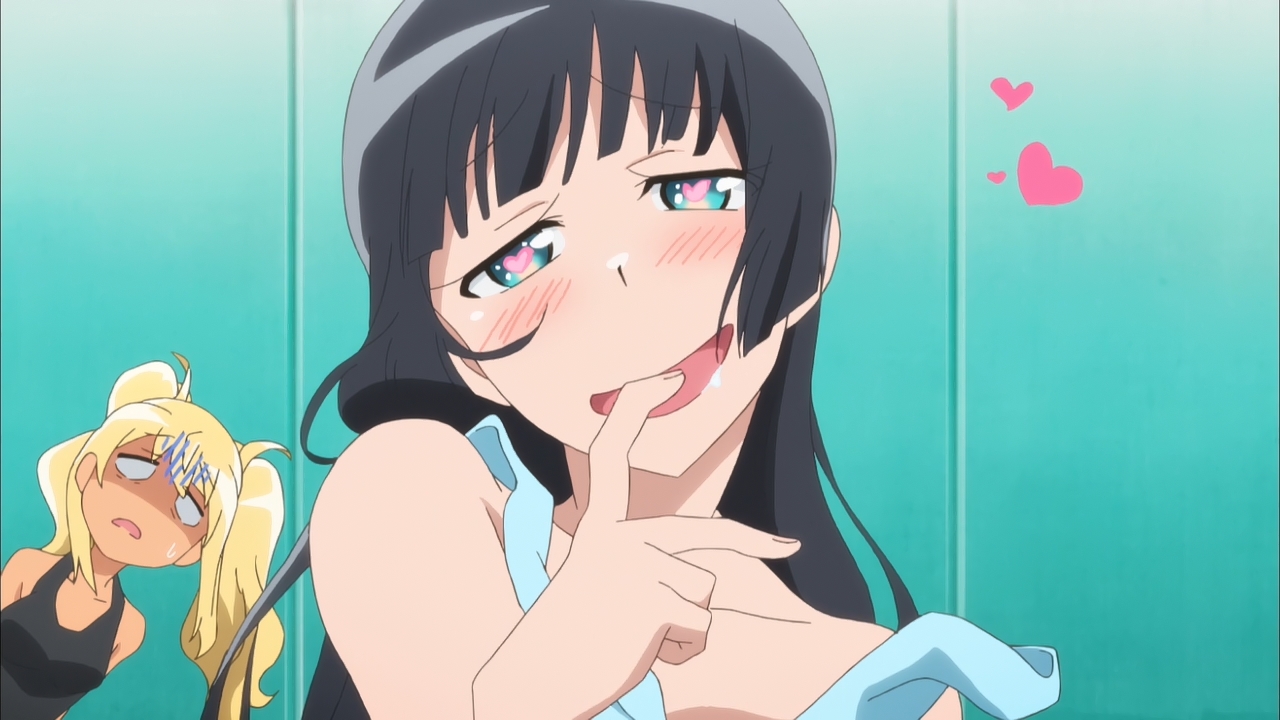 This anime sounded unique, and oh was it. Basically, this is an anime about a girl wanting to lose weight, so she joins a gym in order to achieve that, but she gets a lot more than she bargained for. The first episode was just over-the-top and absurd, yet I liked it a lot!

Hibiki’s a big eater, so you know this will all be a struggle for her, and that’s where a lot of the comedy comes in. Things get further ratcheted up thanks to a classmate of hers that has also joined the gym, Akemi. On the surface, Akemi seems perfect, but Hibiki is shocked to find that Akemi has a muscle fetish, so the gym is basically heaven for her. Akemi reminds me a lot of Yumeko from Kakegurui, but instead of getting off on gambling, Akemi gets off on muscles. Yeah, she’s pretty great. 😛

Between Hibiki and Akemi, this show already seems to have two really entertaining characters, and despite being a little crude, I think the comedy is really enjoyable as well. Also, this anime is somewhat educational about exercise, but not in a heavy-handed way, and even those scenes remain surprisingly entertaining, thanks to the characters. This show may be kinda dumb, but I think it’s funny, so I’m hoping it can keep this up for the rest of the season~ 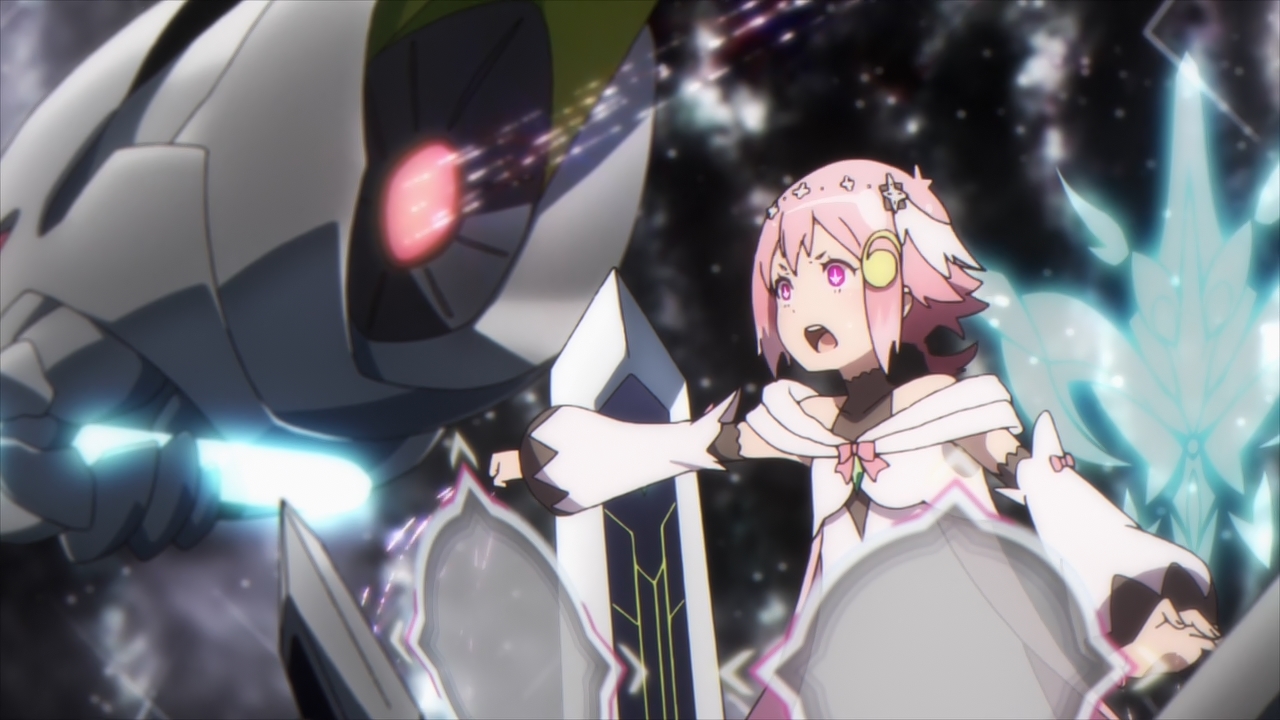 Going in to this, I didn’t really know what to expect from Granbelm, but what we ended up with was a lot of mecha fights in this first episode. The mecha designs might’ve been simplistic, yet the animation was surprisingly good, as was the soundtrack, and this had a bit of an epic feel to it. There was some backstory given regarding this illusionary world that Mangetsu and Shingetsu find themselves in, but because of all the fighting, we didn’t learn very much about the characters themselves.

As for the story itself, I think it might be too soon to predict how it might turn out. The idea of Granbelm, this sort of big monthly battle for supremacy involving mages, sounds kinda meh to me, yet I think there’s some potential there. Looking ahead to the next episode, the preview almost made it seem like a completely different show (set in the “real world” and lacking much action), but hopefully that’ll lead to the story becoming more clear and focused. This is an original anime (and it’s not yet known how many episodes it’ll have), so it should be interesting to see where things go from here, and I think this is definitely an anime to keep an eye on. 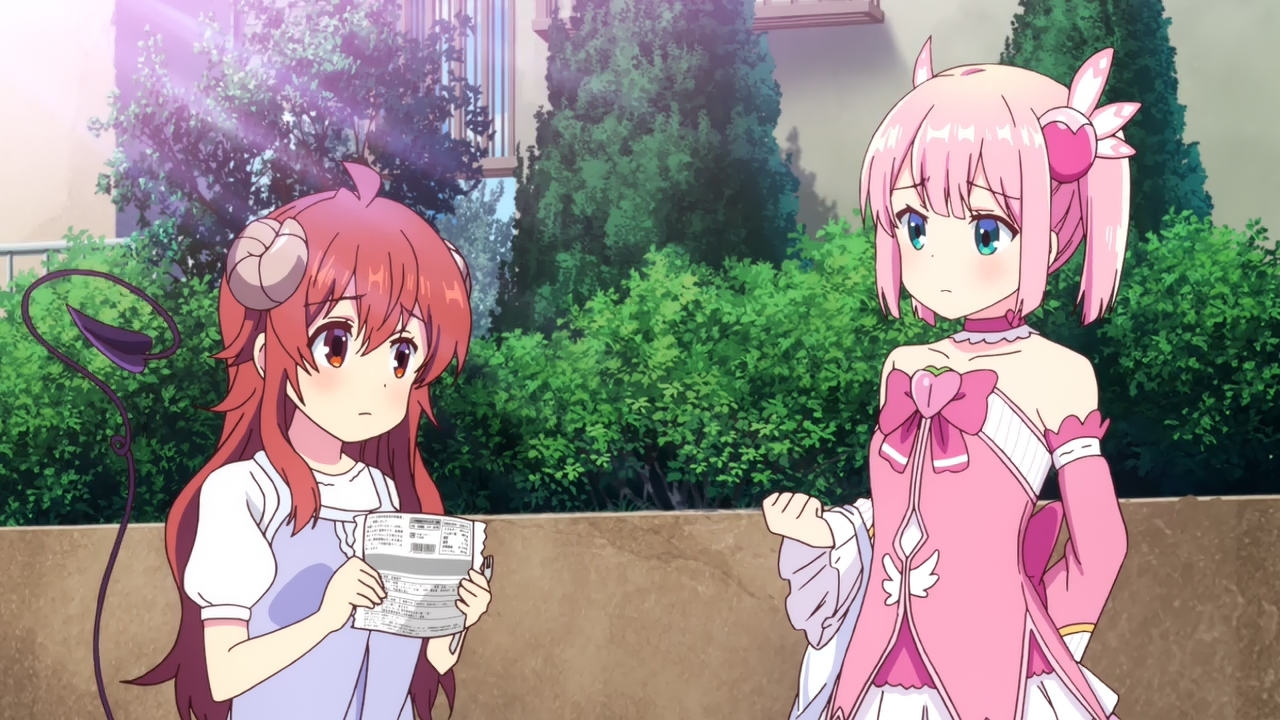 You can’t have an anime season without a lot of magical girl anime, and Machikado Mazoku is yet another one. But unlike Granbelm and Symphogear XV, Machikado Mazoku doesn’t take itself seriously at all, and that’s one of the reasons why I enjoyed this first episode so much. A totally inept demon girl trying to get stronger in order to vanquish a super-strong magical girl sounds pretty dumb—and it is—but it’s also a lot of fun.

Yuko, or Shadow Mistress Yuko, as her mom labels her, seems like the worst candidate possible to become a demon girl, as she’s just physically and emotionallly weak. But Yuko’s failures end up being pretty funny, as is Momo’s complete refusal to take Yuko seriously as a demon girl. Momo is the magical girl, and by all accounts, she’s just a really good person that wouldn’t simply annihilate Yuko like that, even if she is her arch enemy. Their interactions were pretty amusing, and it looks like their relationship should end up being pretty entertaining.

It’s a different kind of show, but after one episode, I think Machikado Mazoku seems more promising than a show like Tonari no Kyuuketsuki-san. Most of the time, I prefer my comedies to be absurd and a little offbeat, and that’s a good way to describe this anime. There’s still a long way to go, but a solid foundation has been set, so let’s hope that Machikado Mazoku can keep up the fun and silliness for the remainder of the season. 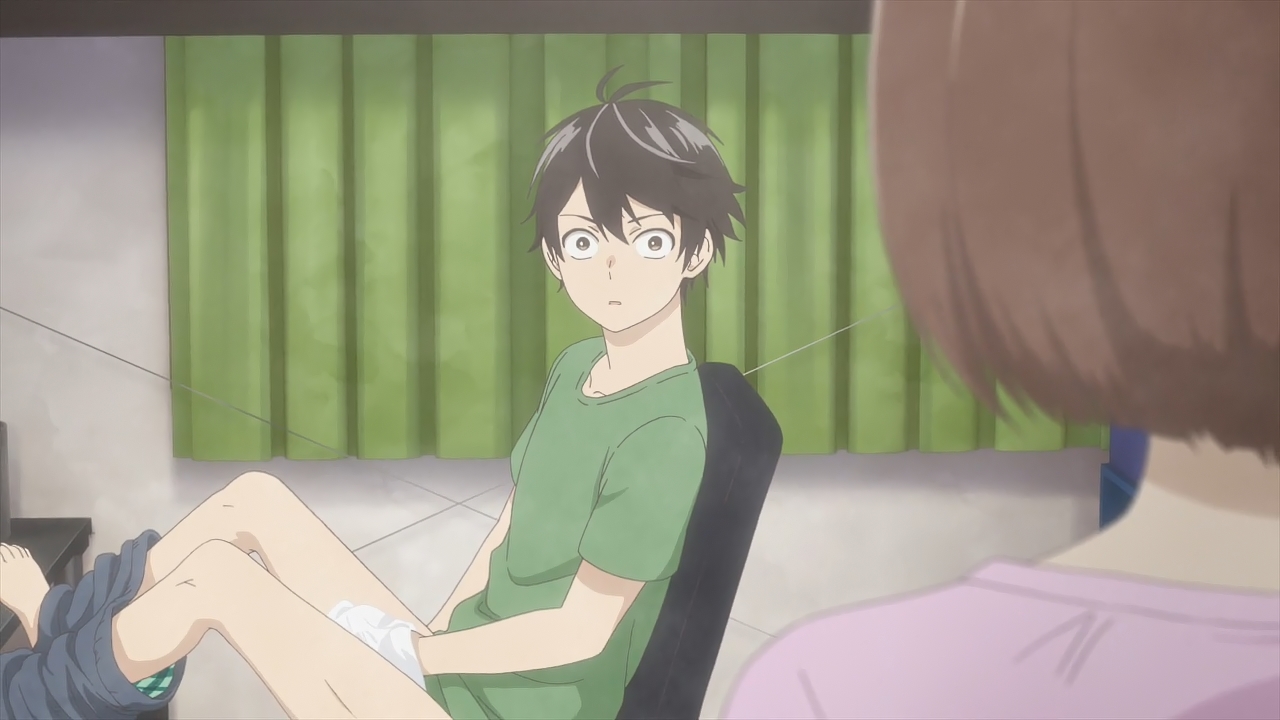 Just from the synopsis alone, this was an anime I was looking forward to, and this first episode started with a bang (so sorry for the bad pun :P). As you might have heard, this show more or less revolves around sex, but the way it gracefully handles this touchy subject feels refreshing. There are sex-related jokes here and there, but I don’t think it feels raunchy at all, and given the state of things, that’s really surprising to me.

This may all sound salacious, yet it’s not like that. It’s about the girls of a literature club discovering the topic of sex in the more mature titles they’re reading, which sets off their adolescent alarms and pushes them towards that scary thing called adulthood. It’s only been one episode, but you get the sense that this coming of age story is going to be full of ups and downs for these characters—and that if episode one is any indication—it’s going to be pretty entertaining. Thus far, there’s nothing to suggest that any of the five main girls may be interested in girls, so just be aware of that. And there is at least one boy that’s being positioned for a prime role in all of this, specifically, a prime role in Kazusa’s coming of age story.

With topics like adults who are romantically interested in kids being touched upon on recent anime [Exhibit A] [Exhibit B], it’s easy to judge this book by its cover (so to speak) and assume the worst, but Maidens of the Savage Season seems like it could be a somewhat tasteful and down-to-earth story of the burdens of adolescence, and I think anime could use more thoughtful character-driven stories like that. 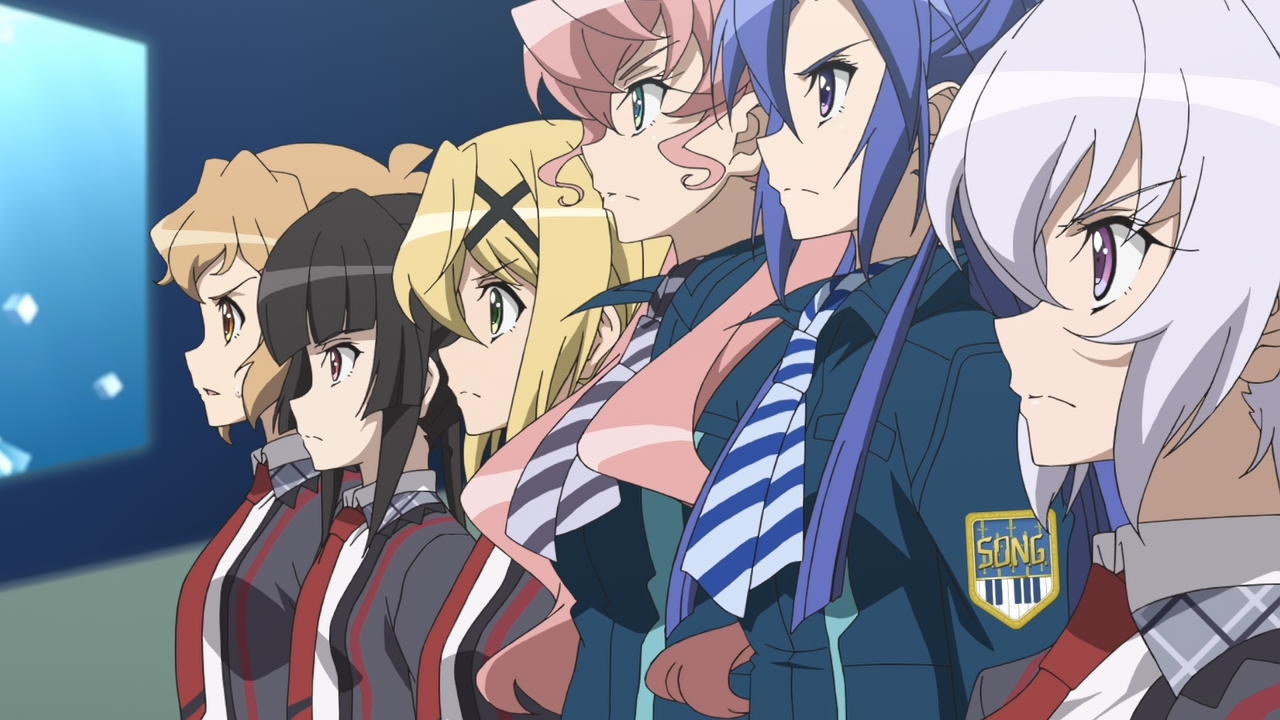 It’s been a couple of years since Symphogear AXZ, but that’s not long enough to make me forgot how disappointed I was with that season. But here we are again with another season, and I think XV is actually off to a promising start.

It only took a few minutes for the singing and fighting to start, and I’m surprised by how much I enjoyed that moment. Singing while fighting is something unique to Symphogear, and it seems it’s as enjoyable as it ever was. Story-wise, the Bavarian Illuminati are nowhere to be found (thankfully), although it’s mentioned that there are survivors. Still, no Adam and no Tiki means that things are already looking up for this season, and in the brief glimpses we get of some potential villains, they don’t seem that bad. The action is as over-the-top and frenetic as ever, and it was great to see all of the girls back and fighting (and singing) against an enemy. It’s only one episode, but what was revealed makes me optimistic that the story will end up being better than that of AXZ, so that’s something to get excited about.

Aside from all of the fighting, there’s a little bit of fluff thrown in there, and we got a nice little scene between Hibiki and Miyu, which hopefully bodes well for some yuri subtext in future episodes. Kiri and Shirabe don’t do much more than fight in this episode, but let’s hope that they eventually get in on the action as well. All in all, Symphogear XV is looking like it might be an upgrade over AXZ, and with seemingly another season of little yuri to get excited about, this very well may end up being our best hope this season. 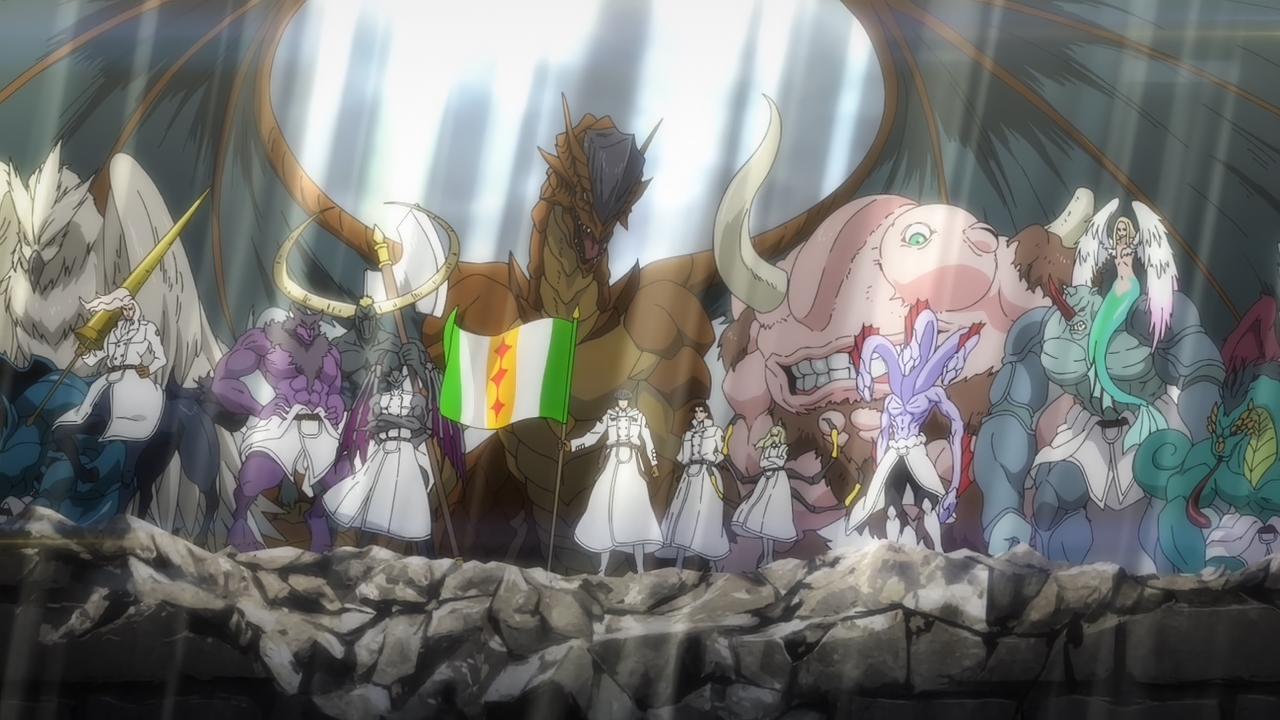 What triggered my interest in this show was seeing that MAPPA was behind it, and through the first episode, things have gotten off to an okay start. The prospects of a long, drawn-out civil war wasn’t really filling me with a lot of confidence, so I’m glad that the double plot twist at the end of the episode changed things up. I can’t say they were too surprising, especially the second plot twist, but I think things are probably more interesting than they were at the midway point of the episode.

The Incarnates seem kind of cool, as does Hank, that Wolverine-looking dude, but the story seems a little familiar. Aside from Hank, I’m unsure how much I’ll end up liking some of these other characters, however, that girl at the very end of the episode might be worth keeping an eye on. Going forward, my expectations are realistic, and I’m not expecting this anime to be anything special, so as long as we get some cool beast fights and as long as the story isn’t too cliché, this should be a decent enough reason to stay away from the sweltering heat. 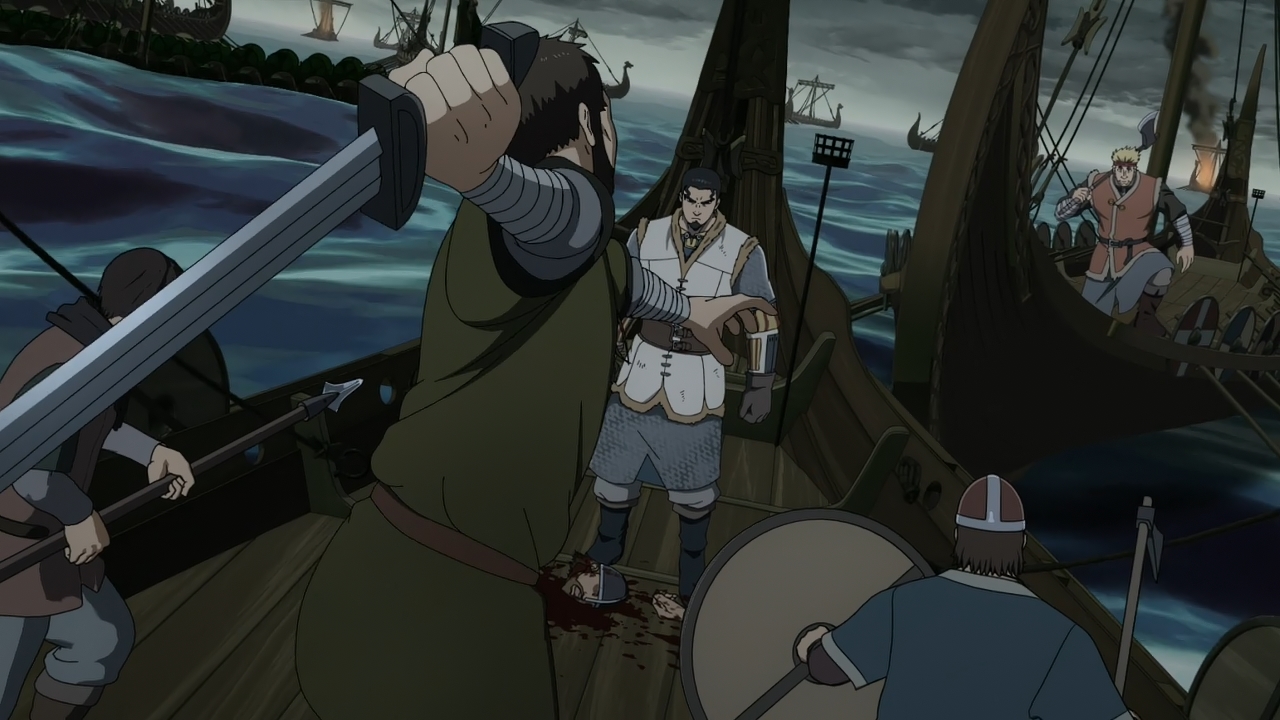 Upon learning of this anime, my first reaction was “Why aren’t there more anime about vikings?” I don’t know of any, but maybe they do exist. Anyway, as you’d expect of an anime about vikings, the first episode was pretty violent, but unlike Shingeki no Kyojin and Kabaneri of the Iron Fortress, which were also from Wit Studio, the first episode of Vinland Saga was low-key in comparison.

I guess that shouldn’t be a surprise, given that the whole setting is somewhat grounded in reality, yet this first episode didn’t really scream “must-watch anime” to me. I thought it was fine, don’t get me wrong, it was just a little less exciting than I thought it would be, and it doesn’t have that instant gratification of something like SnK. More than anything, it seems like episode one was more about introducing us to the world and the characters, rather than hitting us over the head with an insane amount of bombast, and that’s fine. This anime is listed with twenty-four episodes, so I’m definitely expecting business to pick up at some point, and having a strong attachment to these characters would be the ideal scenario.

The manga this anime is adapted from is well-regarded, so I have high hopes that this might turn out to be one of the best anime of the year, but we’ll just have to wait and see.