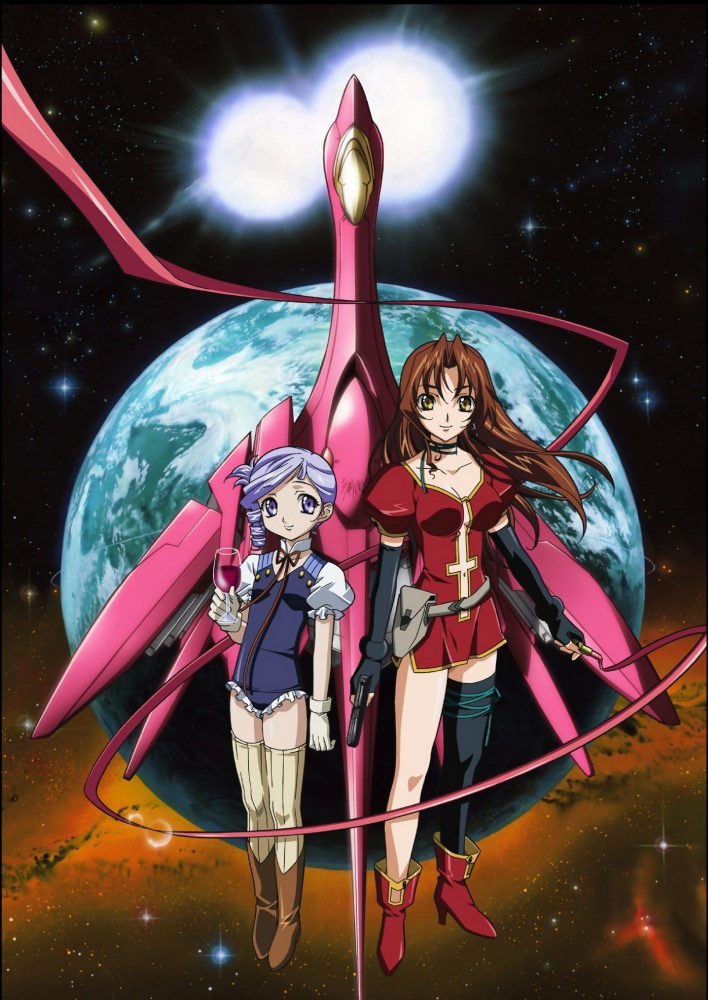 Kiddy Grade and Kiddy GiRL-AND are series that we’ve wanted to cover for a few years now, and we’re just finally starting to get around to it. Especially for the second season, these are supposed to be some yuri-ish anime that should be on everyone’s radar, so was this first season worth the wait? You know I can’t really answer that here, come on now. 😛

Synopsis: In the distant future, humanity has taken to the skies and colonized many planets throughout the universe. An agency known as the Galactic Organization of Trade and Tariffs (GOTT) has been formed to maintain order. Within GOTT, a secret squad of enhanced human beings—known as the ES Unit—carry out secret missions to put a stop to major galactic crimes. Two such operatives are the lowly C-ranked Éclair and Lumière.

Despite being on the bottom of the totem pole, the pair wield formidable powers: Éclair’s superhuman strength and lipstick whip and Lumière’s ability to take control of any computer. Together, they can take on any mission that GOTT throws at them. But as they complete more and more missions, the duo begin to uncover a major conspiracy that leaves them questioning everything they know about themselves and the entire galaxy.

I don’t know about you, but just the name of this anime made me a little uneasy. With “kiddy” in the title and “ecchi” listed among the genres, I was fearing the worst, but even though there is a decent amount of fanservice, this isn’t an anime like Chu-Bra!! or anything. Now that I got that out of the way, let’s talk about the story, which has its entertaining moments, yet I think it also has its fair share of lulls that damper the experience some.

Interstellar politics and the shady goings on of a galaxy-wide organization play pivotal roles in the story of Kiddy Grade, and although that doesn’t sound all that exciting, there’s a lot of things going on behind closed doors that add intrigue to the story. As seems to be common in anime like this, all is not as it seems, and Éclair and Lumière find themselves at the center of a galaxy-wide conspiracy. For a good portion of the season, the two of them are sent on random missions around the galaxy, and while those missions do provide some entertainment, they’re pretty forgettable, and it isn’t until about the midway point of the season that the story shifts and really hits its stride.

“They do technically share a kiss (when Éclair transfers wine into an injured Lumière’s mouth), but aside from that, it’s mostly just subtext.“

I don’t want to spoil what happens, but these nine or so episodes, delve a little bit into our two main girls’ backstories, as well as Éclair’s psyche, and I think it feels like the show isn’t just going through the motions anymore. We get some decent character development from Éclair, although I’d argue that the bulk of it wrapped up too soon, and I was hoping for a better understanding of who they really are and all that transpired in their pasts. Anyway, this middle part of Kiddy Grade was definitely where I was enjoying it the most, but all of that goodwill was nearly thrown away with what came after…

To me, the final arc feels completely unnecessary, and I think it would’ve been better if things had just ended around the twenty episode mark. From that point on, the story feels a lot more contrived and like it’s trying really hard to have this grandiose finale, but it just comes off feeling cliché and melodramatic. Really late in the season, there were a couple of plot twists that threatened to shake things up, but to me, they were mostly just met with a shrug. That’s probably because they ultimately didn’t really change anything, besides your perception of a few characters.

Despite that late disappointment, I think the story was still competent, and you don’t have to search that hard to find worse examples of a sci-fi story, so at least it’s not outright bad. 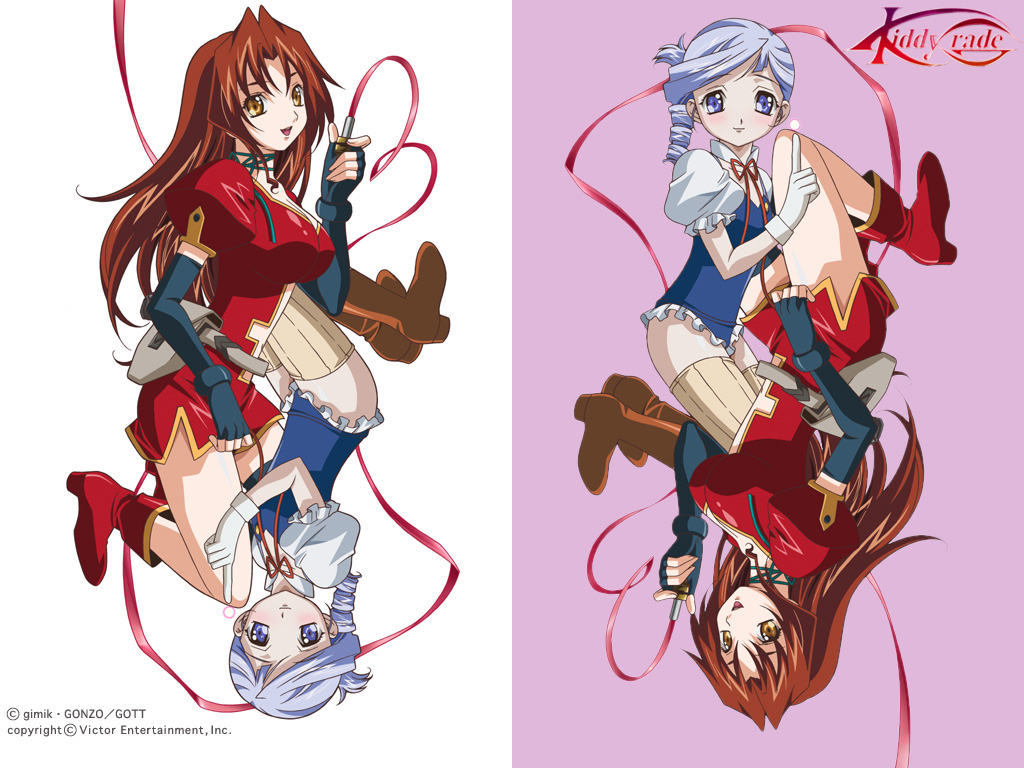 Like so many other female dynamic duos in anime, Éclair and Lumière are the kickass pair that helps make the series enjoyable to watch.

You can kind of view Lumière as the brains of the duo—with her hacking and ladylike personality—while Éclair is the brawn that gets in there on the frontlines and just wrecks their adversaries. Their personalities go really well together, and in addition to having some pretty cool abilities, their backstories are particularly interesting. That said, I felt like a lot more could have been done with their backstories, instead of just some quick flashback scenes that ultimately aren’t as impactful as they should be. Lastly, I usually tend to dislike it when characters can’t die. To me, it feels kind of like a cop out, and it robs the viewer of some legitimate drama. The immortal character is in a pinch? No problem! Even if they “die”, they’ll just be back in a jiffy. It seems like a “get out of jail free card” more than anything, and I don’t really like it, but to each their own. 😛

Besides Éclair and Lu, there are quite a lot of characters in Kiddy Grade, and as a group, they come off as more than serviceable. Pretty much all of the other ES members are fairly entertaining in their own right, but two in particular ended up leaving a very positive impression. I’m talking about Alv and Dvergr (sorry, Viola). They just seemed to have a lot more attitude than the other ES members, and it helps that they at times play more than just your standard supporting roles in the story. I was wanting to mention how they were also pretty shippable, but then I remembered something, and that option’s no longer on the table. Still, I thought they were a really entertaining duo that clashed with Éclair and Lu very well.

And then there’s Armbrust, who I thought was one of the more intriguing characters in the bunch. For the majority of the season, he’s more or less relegated to sidekick status, yet he sometimes drifts between seeming like an ally and an enemy, and he has a mysterious air about him.

“But what about the yuri involving Éclair and Lumière?” you say? Well, first off, let me say that I was expecting more. In our List of Yuri Anime Kisses post, there are eleven yuri kisses dedicated to Kiddy GiRL-AND, so I was expecting a lot of yuri in this first season, yet what we ended up with was just some yuri subtext, and not a ton of it. 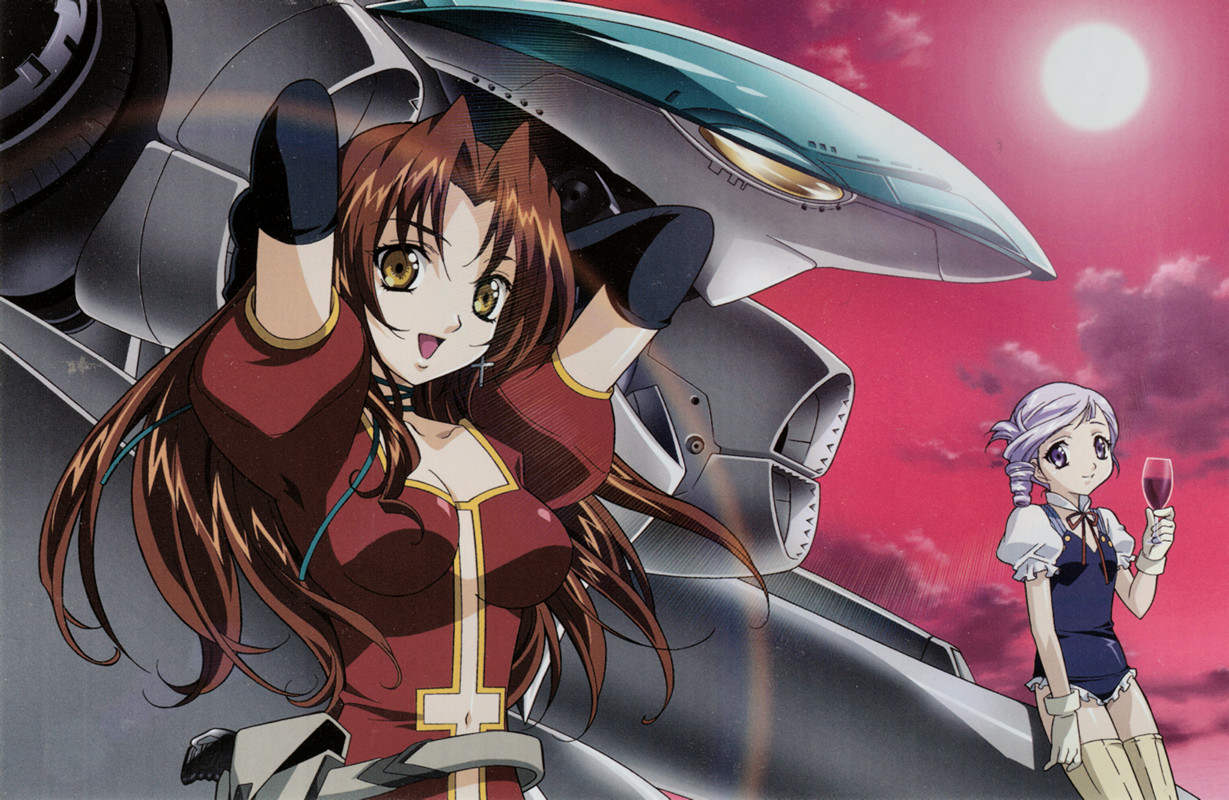 Clearly, Éclair and Lumière go way back (despite their outward appearance, they’re not actually teenagers) and they care a great deal about one another, but I wouldn’t necessarily say that their relationship explicitly comes off as romantic in nature. They do technically share a kiss (when Éclair transfers wine into an injured Lumière’s mouth), but aside from that, it’s mostly just subtext. I guess seeing all those kisses from the second season raised my expectations a great deal, and anything less than that was doomed to be seen as a disappointment. Still, their relationship is comparable to that of those girls from the girls with guns genre, and in this genre of action/sci-fi anime, I think that should still be considered a victory.

Overall, I didn’t love this cast of characters, but they’re nevertheless stilll pretty entertaining. Éclair and Lumière aren’t all that different from the female duos from other action anime, and despite the feeling of some wasted potential, they, and the other characters, are arguably one of the best things about this anime.

In keeping with the comparisons to the Bee Train trilogy, I don’t think it’s wrong to say that this anime has the edge when it comes to animation, and that’s including El Cazador de la Bruja, which started airing nearly five years after Kiddy Grade. Of course, there isn’t as much action in this anime as there was in those other shows, and I’d say that the action scenes in Kiddy Grade do lack the consistent intensity of the battles in those girls with guns anime, yet that isn’t solely because of the animation.

It’s not all that surprising that there’s a little bit of fanservice in this anime. But aside from a brief (and rather innocent) nude scene that I recall, the fanservice doesn’t really extend to anything beyond some panty shots, which is (or should be) pretty much accepted as the norm for anime with many female characters. I don’t think it’s enough to ward off those who detest fanservice, and I also don’t think it’s enough to satiate those who watch these kinds of shows just hoping to see some lewdness.

One tiny issue I had was that since Éclair and Lumière never seem to die, they eventually come back in different bodies, and when that happened, I just preferred the “old” character designs a lot more, especially for Éclair. But aside from that, there isn’t a lot of complaining to do regarding the visuals of Kiddy Grade.

With twenty-four episodes to fill, the music gets a lot of opportunities to shine, and I think it does an admirable job. For me, the music wasn’t especially memorable per se, but I think part of that is because it was just so consistently on point that I didn’t think about it too much. If it just boils down to enhancing the cinematic experience, the music here definitely does that, regardless of what type of mood the show is going for.

It’s very easy to compare Kiddy Grade to some of the girls with guns anime like Canaan and the Bee Train trilogy, but that doesn’t do it any favors, and it’s not really fair, since this just isn’t that kind of show. But it still has a lot of action, and although the politically-driven story might not appeal to everyone, the characters and production values are pretty appealing. I was hoping for more than just yuri subtext, but you can do a lot worse than that, and for yuri fans who are into sci-fi, I think Kiddy Grade is an anime that you probably should get around to watching, sooner or later~ 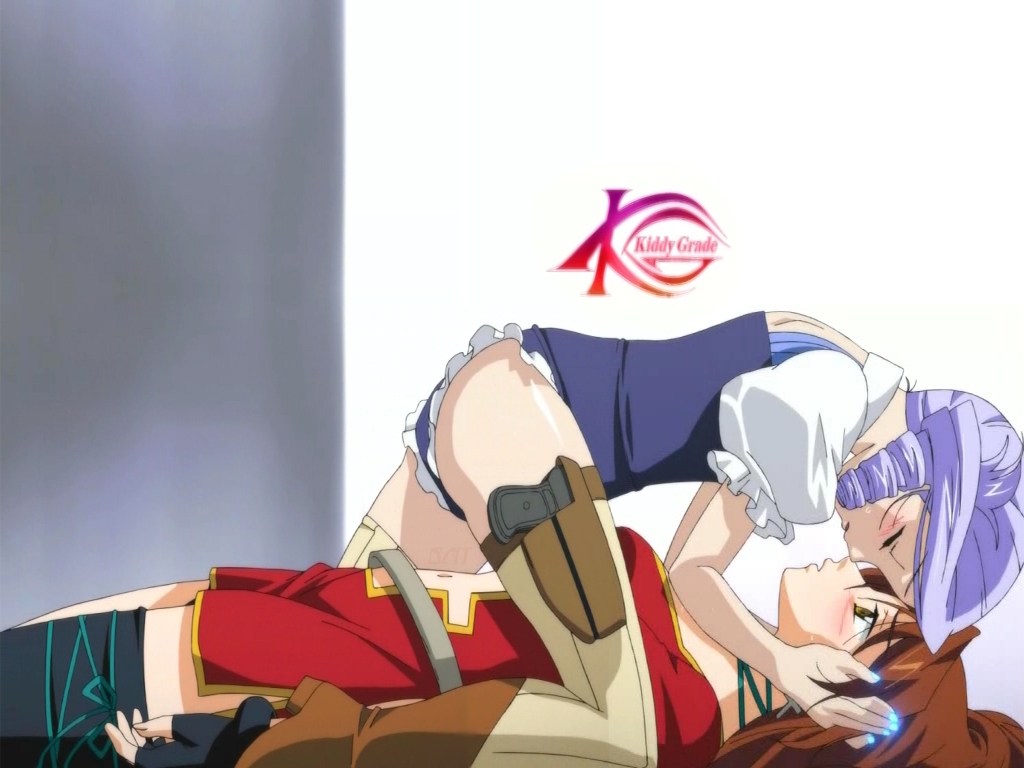