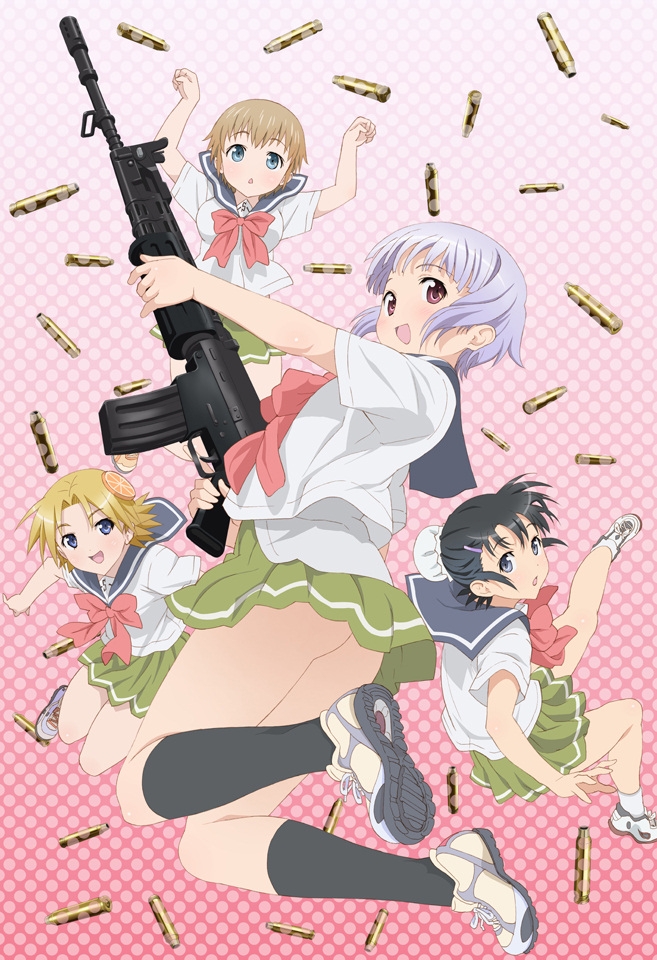 Upotte!! is an anime that I tried watching a few years ago, but I eventually dropped it. Now, it’s finally time to take care of some unfinished business, but that doesn’t mean that I suddenly enjoy this show now…

Yes, at Seishou Academy every girl is literally a lethal weapon, and they’re all gunning for the top shot at getting their own personal serviceman! Needless to say, it’s going to be difficult for newly recruited human instructor Genkoku to adjust to working with a living arsenal of high caliber cuties with tricky names like FNC (Funko) M 16A4 (Ichiroku) L85A1 (Eru) and SG 550 (Shigu). Especially since many have hair triggers and there’s no bulletproof vest that can stop a really determined coed! He’ll have to rewrite the operator’s manual on student/teacher relationships, and pray that his job description won’t include having to field strip and reassemble one of his cadets in the dark. But unfortunately (for him) FNC’s already thinking about becoming HIS personal weapon, and she usually gets what she aims for!

Okay, let’s talk for a minute about that synopsis. It’s worded in a way that makes it seem like it’s the teacher who’s the protagonist, but in reality, it’s actually FNC that’s the main character. That said, the other part of the synopsis is kind of more or less true. Upon first spotting him at a festival, FNC was instantly enamored by his knowledgable stance and grip on a toy gun, causing her to get all worked up and imagine that she’d fire so fast if he were to grip her like that…

Yeah, nobody here wants to see anything like that, yet that theme continues for a major portion of the season. To his credit, the teacher doesn’t view FNC or any of the other girls in an inappropriate light, and he’s actually weirded out being a human that’s surrounded by all these girls who are actually guns. But enough about him. As unique as the premise is, nothing is really done with it, so Upotte!! unfortunately doesn’t really have any sort of cohesive story.

For the most part, the girls just go about their business at the academy and have the occasional extracurricular battle that threaten to make this show mildly entertaining, but not even those battles can do much to keep Upotte!! from becoming surprisingly boring. If you thought that a mere ten episodes was enough to ensure that there wouldn’t be time for filler, you’d be wrong! In addition to an entire episode of filler (episode seven), there are standard anime tropes such as the beach episode and the school festival episode. It’s kind of disappointing for me to see how basic this anime can be, given the unique circumstances it has going for it.

“Way back in the day, what initially got me interested in watching Upotte!! was seeing a yuri kiss between two of the characters (Sako and FNC).“

But not having much of a story isn’t new (the entire slice of life genre says hi) and it doesn’t damn this anime and make it unwatchable or anything, but it just wasn’t very entertaining to me. I thought that the action scenes were pretty disappointing and lacked a real sense of drama (apparently, these girls can take a headshot with no consequences other than some messed up hair. And later, we learn that if a human is shot by someone other than another human, the wound magically disappears), the comedy was more miss than hit, and overall, I just wasn’t invested in this anime. It certainly doesn’t help that the only antagonists that are worth mentioning only stick around for about two-and-a-half episodes, and the main cast doesn’t do much to add to the experience, but more about them later.

And given the current state of the world, it’s kind of odd to be watching an anime created in a nation with such strict gun laws and one that kind of romanticizes these deadly weapons. Quite a bit of time is spent informing viewers about the history of a lot of these guns, but to me personally, I just wasn’t interested learning about it. I suppose if you’re an NRA member or someone who’s really into firearms, these informational scenes would be pretty entertaining and fascinating, but for 99% of viewers, I’d imagine that there’s no real desire to be taught some history lessons by this anime.

And when it comes to the characters, Upotte!! doesn’t really redeem itself by having great characters.

FNC is your standard anime main character, and like so many that came before her, she’s mostly forgettable and doesn’t exhibit a ton of personality. Others like Sig and Sixteen stood out to me a little more, yet they were both no better than average, and I wasn’t a fan of Sixteen’s attitude towards Elle, so there were more subpar characters than just FNC.

There are a lot of other girls, yet they didn’t contribute much to my overall enjoyment either. To a small degree, the girls’ personalities/tendencies mimic the functions of their weapons. For example, Elle often breaks down and isn’t as reliable as most of the other girls, and while that’s kind of a nice touch, assigning the functions/tendencies of non-living objects to living characters ultimately isn’t as rewarding as I thought it would be, so that’s only mildly entertaining.

Way back in the day, what initially got me interested in watching Upotte!! was seeing a yuri kiss between two of the characters (Sako and FNC). It’s only one kiss, but it hammers home the fact that Sako RK 95 is undoubtedly a lesbian. Here’s where I should mention that Sako is a sadist, and before the kiss, we already saw her feel herself up and get all wet whlie watching FNC during a team battle. It isn’t what I would call romance, but hey, beggars can’t be choosers. Unfortunately, after the team battle ends, Sako goes away, so that’s a major source of personality and the primary source of yuri for this anime that leaves.

But even after Sako leaves, we see another girl, Aug, step up and take the mantle of the gayest gun in all the land. Unlike Sako, Aug only wants to talk to FNC, but the problem is she’s incredibly shy, so that interaction doesn’t come easily. Later, while working to construct the set pieces for the maid cafe that the girls are setting up, Aug writes out “FNC Love 4 Life” in bullet holes, so that’s a not so subtle reminder that Aug does indeed swing that way. Sixteen, the M16A4, gets in on the yuri action by being the resident perv that feels the other girls up while taking a bath, and that’s her sole contribution to the yuri in this anime. Still, Upotte!! has a little more to offer yuri fans than a single kiss, and given how lackluster the rest of the show is, I’ll consider it a victory for yuri fans~

Animation-wise, this anime doesn’t really do anything that impresses. The gunfights are anything but flashy, and unlike some other action anime, the combat is very grounded in reality and arguably not as entertaining as a result. There is a decent amount of fanservice in Upotte!! but I don’t think it’s enough to truly deem it ecchi or anything.

Since I’m not a gun afficionado, I can’t tell if the sounds from each girl are accurately based on the real-world weapon or just some random gun sounds, but it would be cool if they were the actual sounds made by each gun. Anyway, the music is just like the other aspects of this anime, completely forgettable. During what were supposed to be the more intense action moments, I don’t think the music did much to elevate these moments, so simply put, I wasn’t impressed by what Upotte!! had to offer from a sound perspective.

Girls with guns is a pretty entertaining subgenre that a lot of people enjoy, but this version which sees girls as guns wasn’t as enjoyable to me. Whether it’s the lack of story, the mediocre characters, the educational aspects that only seem to cater towards a niche demographic, or some other reason, Upotte!! just wasn’t my cup of tea. For others like me, there is a bit of yuri to help make this anime more watchable, yet, at the end of the day, this isn’t an enjoyable military anime like Girls und Panzer, and it just wasn’t very enjoyable to me. 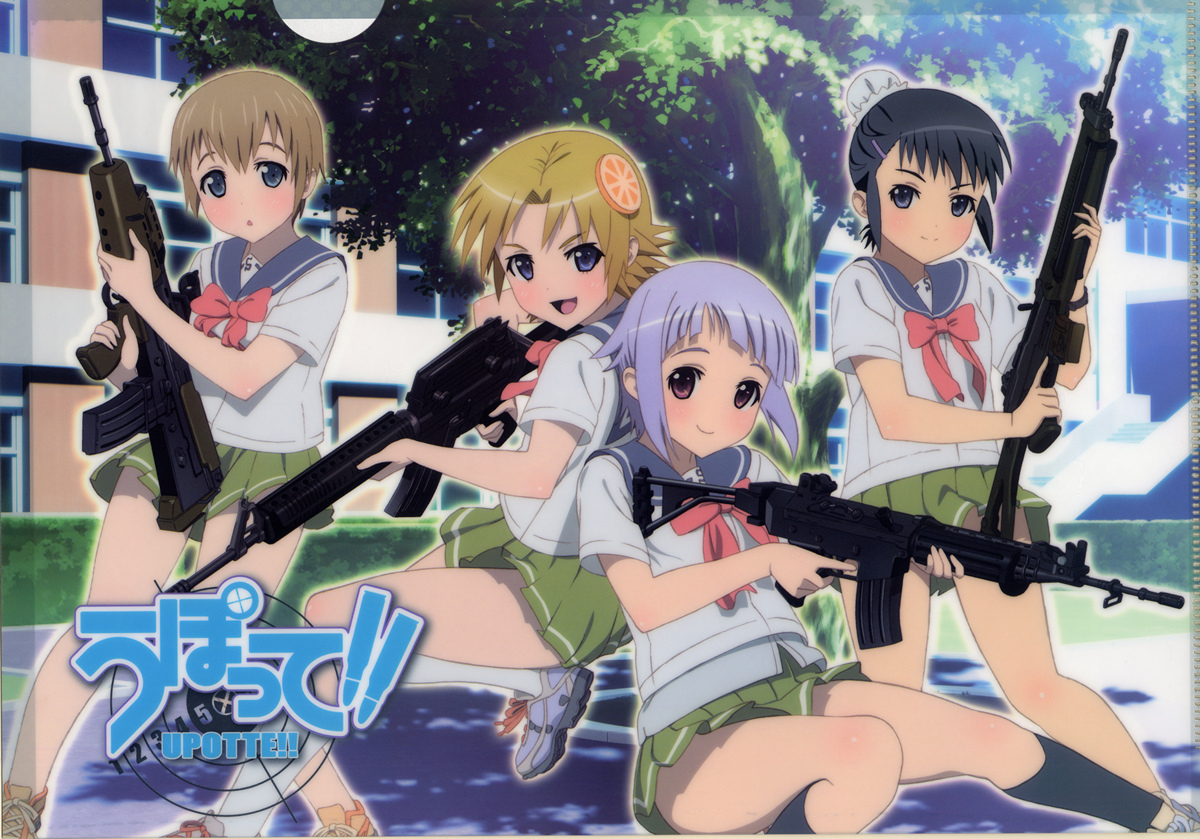