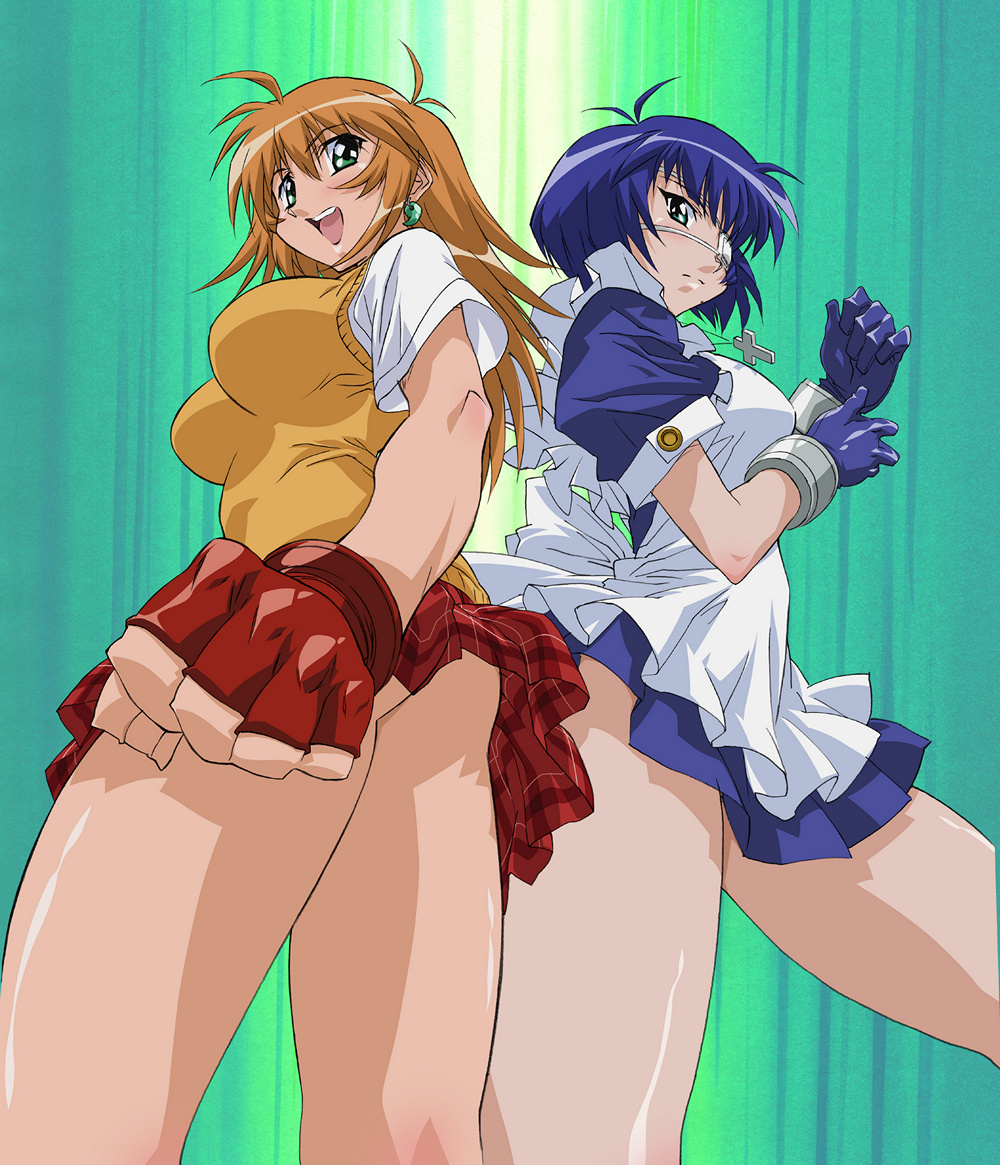 If you took a long look at our List of Yuri Anime Kisses post, it might lead you to believe that Ikkitousen is an anime franchise that should be on yuri fans’ radar. But is that really the case? Well, *takes deep breath* read on to find out… 😛

Synopsis: In Ikkitousen, the Kanto region of Japan is locked in the middle of a turf war between seven different high schools. Among the students of these schools are a select few who are in possession of sacred beads. These magatama harbor the souls of warriors who fought during the Three Kingdoms Era of Chinese history. Not only are these students blessed with abilities that draw from the souls they are tied to, but they are also blessed, or maybe cursed, with the fates of these warriors from the past.

One of these students is Hakufu Sonsaku; a young, caring, dim-witted girl who has recently transferred into Nanyo Academy and will be living with her cousin, Koukin Shuyu. Hakufu’s arrival creates an almost immediate sense of tension due to her power as a fighter and the possibility that she may be the one who carries the spirit of the Chinese warlord, Sun Ce. The most powerful fighters at Nanyo, known as “The Big Four” are shaken by her presence and determined to stop Hakufu from achieving the goal given to her by her mother: to conquer those who challenge her and unite the seven schools.

Before we get started, it should be known that some aspects of Ikkitousen—namely the sacred beads—are loosely based on Romance of the Three Kingdoms. What does that mean? Each “Fighter” has their own sacred bead, and within that bead lies the soul of an ancient warrior. For example, within Hakufu’s bead resides the soul of Sun Ce, and to some degree, the various characters’ current situation echos that of their ancient counterpart. I’m not really familiar with Romance of the Three Kingdoms myself, but I’ll give the show the benefit of the doubt and assume that people who are familiar with it will appreciate the nod.

It’s a novel touch that adds a layer of intrigue to the story, however, I think it still feels too much like a gimmick, and it’s not enough to overcome the somewhat generic “high school battle” storyline that’s also at the heart of the anime. The random battles and “Great Fighters Tournament” are kind of interesting, but the story goes nowhere fast, and when it finally does move past the tournament arc, the remaining few episodes are not as entertaining as I was hoping for (hello, hot springs filler episode).

All in all, I don’t think the story of Ikkitousen ever really got into a groove. Whether it was the school tournament or the ongoing drama regarding Hakufu and the spirit within her sacred bead, the stakes didn’t seem as high as they should have been, and more than anything, it’s far too obvious that this is just an excuse to showcase sexy schoolgirls fighting with one another. That’s all well and good, but something a little more than that would have been nice.

“It doesn’t take long to see that they’re far more than just friends/allies, and on top of being romantic, we see that their relationship is also sexual in nature.“

Unlike Valkyrie Drive or Queen’s Blade, Ikkitousen DOES involve male characters (a lot of them, actually), but as a whole, I think this was a pretty decent cast of characters.

Hakufu is the poster girl, and as such, it should come as no surprise that she’s perhaps the most entertaining character of the season. Of course, she kicks a lot of ass, but at the same time, she’s an airhead who serves as the source of most of this anime’s comedic moments (along with her mom). A major storyline is the potential emergence of the spirit within her sacred bead, so she’s prone to “Hulking out” and raging against her foes. All in all, I think she was an entertaining character that added a lot of juice to the show.

Every leading character needs a sidekick and in this anime, that honor belongs to Koukin, who’s equal parts guardian and babysitter to Hakufu. In case you’re wondering, there is some romantic tension involved between them (it comes solely from Koukin), despite them being cousins, yet I didn’t find the whole situation as annoying as it could have been.

Aside from Hakufu, I’d say that Ryomou is the other candidate for most entertaining character. Unlike Hakufu, Mou’s always serious and intense, but like Hakufu, she too is a huge badass, and with her submission-heavy fighting style, she takes home as many arms as Ronda Rousey over the course of the season. It was especially cool when the two would team up, but them facing off against each other was also sweet. 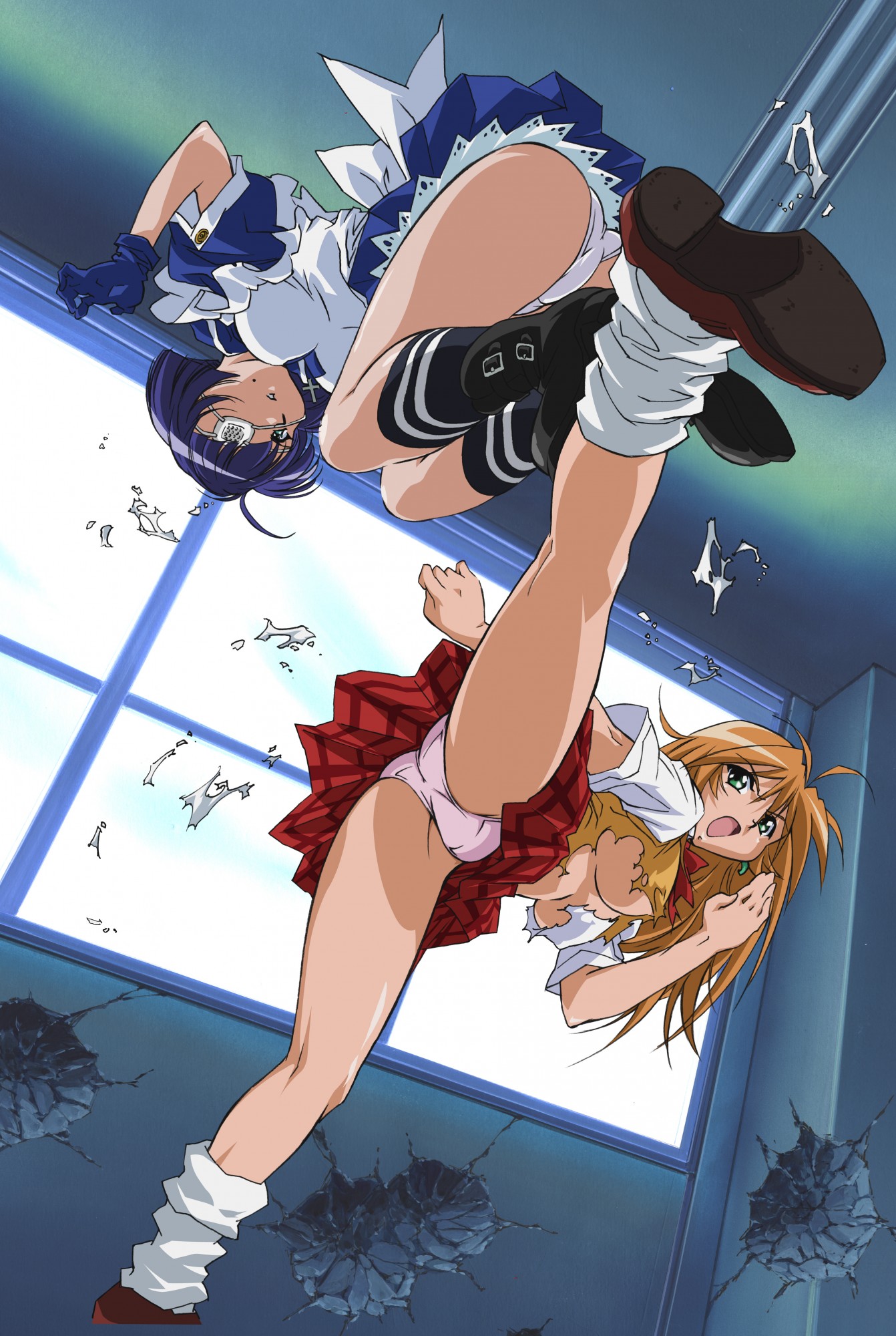 Hakufu and Mou and the others are cool and all, but what about the yuri? Well, the yuri in Ikkitousen comes courtesy of Ryofu, who seems to be bisexual. In the earlier portions of the season, she seems to have a thing going on with Saji, but later, we learn about her relationship with Chinkyuu, her childhood friend and confidant. It doesn’t take long to see that they’re far more than just friends/allies, and on top of being romantic, we see that their relationship is also sexual in nature. But like a lot of these situations, these are supporting characters we’re talking about, so while Ryofu has a defined role in the story, Chinkyuu does not, and her appearances don’t come around very often. That said, when they are on-screen together, Ryofu and Chinkyuu definitely offer up something that yuri fans will like (including a couple of kisses), I just hope fans don’t get too attached…

Other characters like Goei, Toutaku, Gakushu, Saji, Kannei, and Bunwa are decent enough, but it’s mostly the main character that leave the lasting impressions. And then there are the characters who we just plain don’t see enough of. Specifically, I mean Kan’u and Ukitsu. Kan’u definitely looks the part, and the only time we see her is when she’s kicking ass. We learn next to nothing about her, yet she has that charisma that leaves you wanting to learn more. As for Ukitsu, her appearances are just as rare as Kan’u’s, and it’s hard to decipher whether she’s friend or foe. Hakufu’s mom was cool, though I’d rather have seen less of her and more of Kan’u, but that’s just me.

Anyway, I can’t complain too much about the cast of characters. I’d say that they’re comparable to the cast of characters from Queen’s Blade, so make of that what you will. There’s more than enough badass characters that are wearing very little, and if that’s all you’re really looking for, you should be pretty happy with this group.

Despite not being a recent anime, the animation of Ikkitousen is actually pretty good. There are a lot of fight scenes, and in addition to being smooth and… okay. Let’s be real. The major draw here is all of the fanservice, and if that’s what you’re into, you should be pretty satisfied with all of the ecchiness that this anime has to offer. There are tons of panty shots, the girls’ clothes have the strange tendency to tear at the most revealing places, and there are also a few topless scenes to boot. Now, this first season doesn’t approach Valkyrie Drive levels of perverseness, but aside from hentai, what does?

There was a lot to enjoy in terms of visuals, but when it comes to the music, what we’re presented with is rather underwhelming. Nothing stood out to me as being especially noteworthy, and despite all of the action, I feel like the music didn’t quite do its part to help make these fight scenes more intense and memorable. But when the major selling point of your anime is a bunch of half-naked schoolgirls, I guess the music doesn’t really matter all that much…

Before I started watching these ecchi shows, I had always considered Ikkitousen and Queen’s Blade to be like sister series. Years later, now that I’ve finished Queen’s Blade and have started Ikkitousen, that opinion was spot-on. Both series have a lot of mostly naked girls fighting, both tell mediocre stories that struggle to meet your already low expectations, both look pretty good, and both still somehow end up being more entertaining than they have any right to be. It’s a shallow form of entertainment, but it’s still decent entertainment. 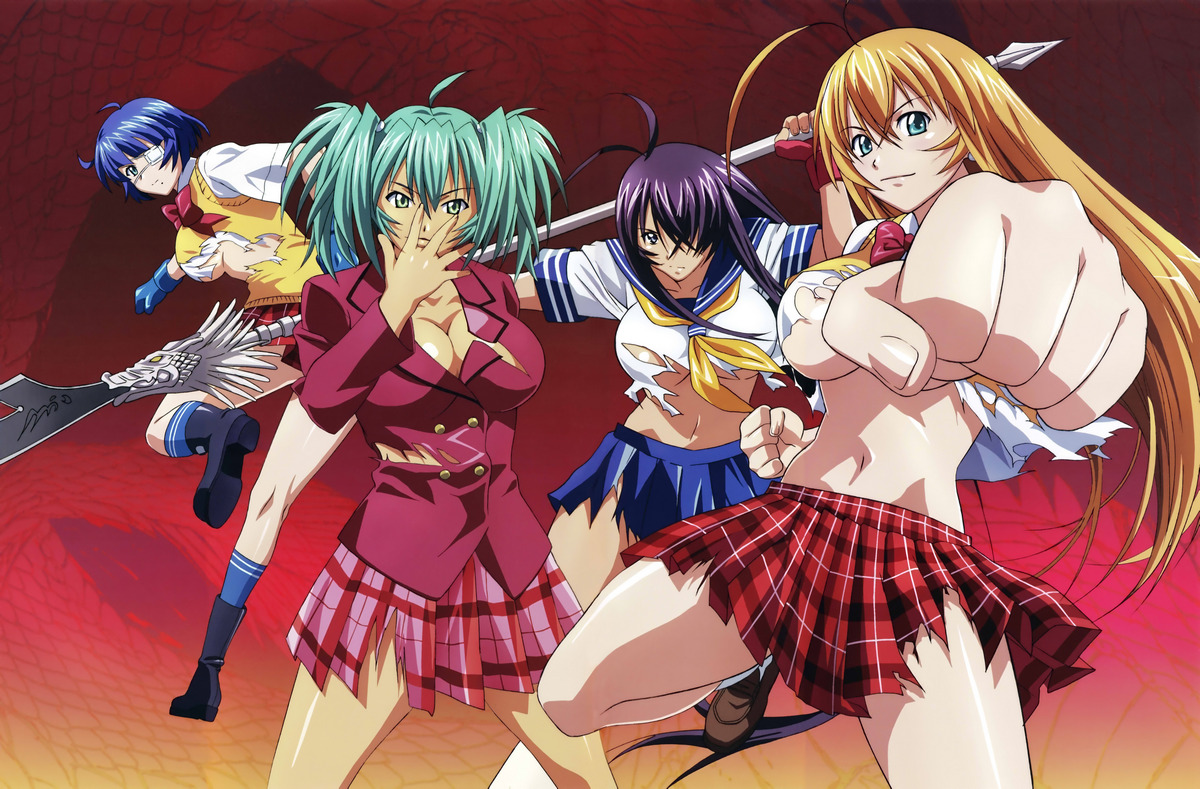