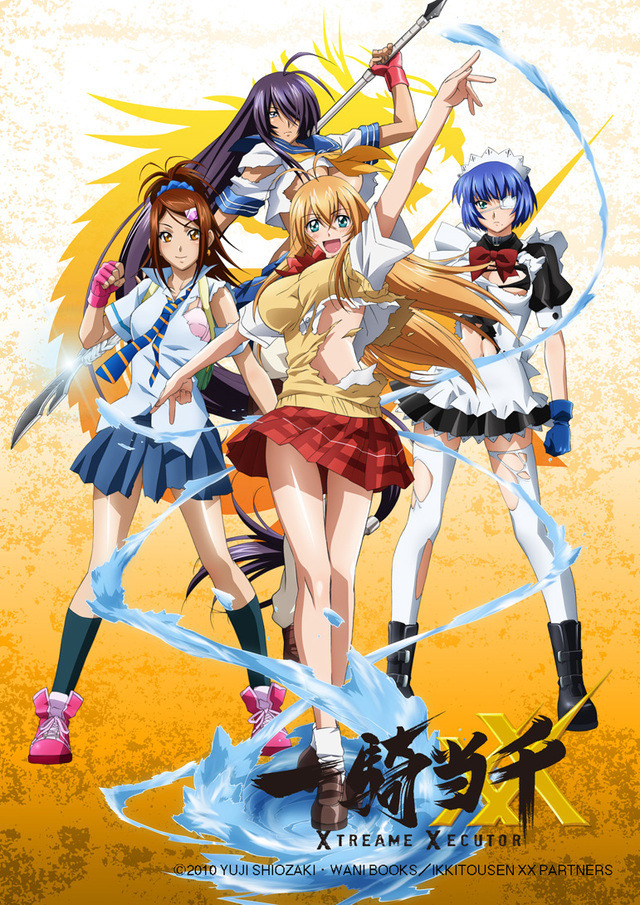 Is it over yet? It’s not that I hate Ikkitousen or anything, it’s just that I’ve grown desensitized to half-naked schoolgirls who fight each other. Life has no meaning anymore… 😀

Synopsis: Life gets crazy for Hakufu when she takes on a pupil that acts just like her! A tournament between the school heads start, but due to Hakufu’s negligence, her pupil ends up taking her place. The tournament isn’t what it seems, and the girls find themselves in the middle of a plot to take over the clans.

After a surprisingly decent showing in Dragon Destiny, I thought the series came back down to earth in the following season, Great Guardians. So which season will Xtreme Xecutor take after? Well, I think this season is a little more akin to Xtreme Xecutor.

Like last season, Xtreme Xecutor is a little lighter in nature than what we saw in Dragon Destiny, but unlike last season, at least there isn’t half a season of filler to sift through this time around. Part of the comic relief comes in the form of new main character, Bachou, who becomes Hakufu’s apprentice along her quest to avenge her brother. Due to her similarities to Hakufu, Bachou doesn’t really bring anything new to the table, yet she’s hardly the only character involved, so this season doesn’t feel that different than seasons past.

“In the few instances they do share the screen together, Kan’u is her usual shy (and gay) self around Gentoku, however, the two do share a cute scene in the final episode, so at least there’s that.”

If you read the synopsis, you’d know that another tournament is afoot, but it turns out that that’s just a trap, so that means there’s once again plenty of fighting this time around. Another school, Nanban Academy, rises up and aids the real antagonist of the season in their dirty deeds, bringing fighters from the remaining schools together to defeat this new foe. I say new, but it’s kind of a familiar face, if only in appearance.

Anyway, the story is pretty straightforward and simple, yet I have to say that I think I liked it a little more than the story in the first season of Ikkitousen. A few seasons in, and I just want to see some good fights and people beating each other up, and as long as the rest of the story isn’t too dumb, that’s pretty much all I need. I’d say that this season meets those relatively low standards, and it differentiates itself enough from prior seasons that I can overlook it being pretty forgettable.

Finally, we got a tiny bit of backstory involving Mou, which showed how she got her dragon. It was a brief flashback, but Mou has remained an underdeveloped character for a while, so any kind of development involving her is good.

I already mentioned Bachou’s lukewarm debut, but just know that almost everyone from prior seasons returns in some capacity, but getting them all enough meaningful screen time sometimes proves to be a challenge. 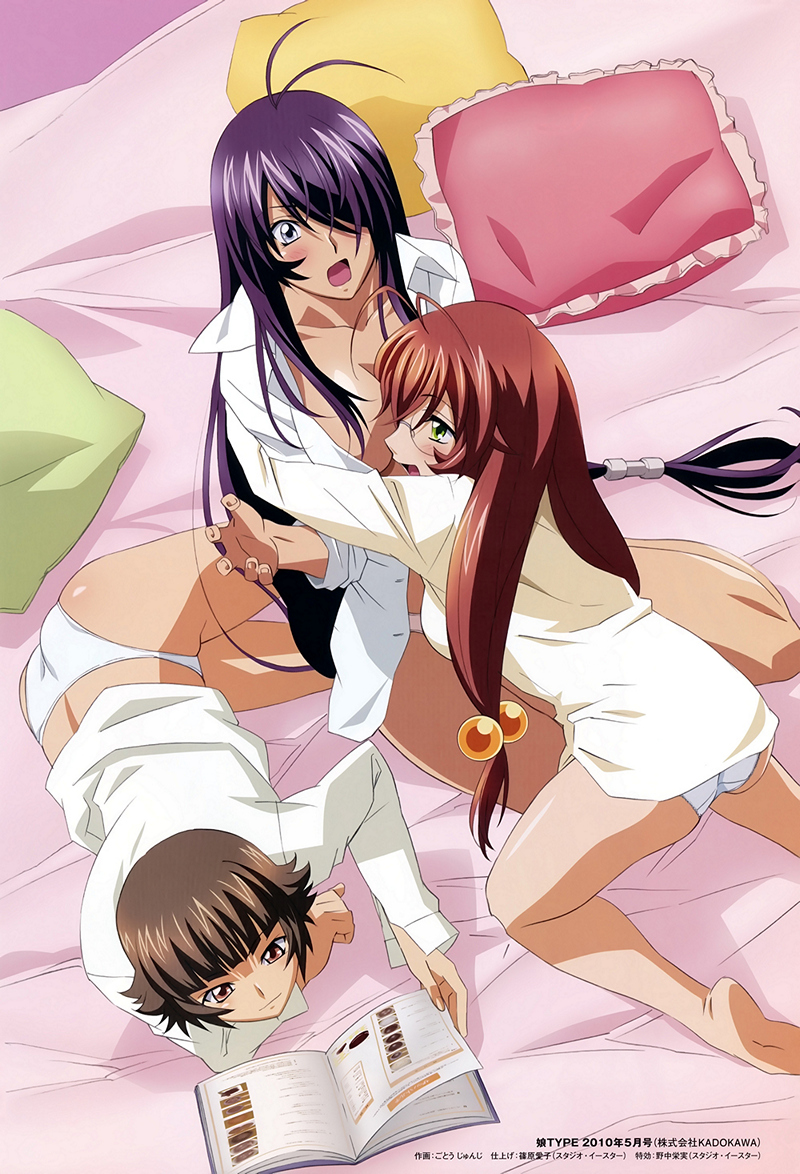 Up until this point, Kan’u and Gentoku have been the pairing at the center of the yuri discussions involving this show, and nothing really happens this season to change that. That said, the two don’t spend a whole lot of time together (again). In the few instances they do share the screen together, Kan’u is her usual shy (and gay) self around Gentoku, however, the two do share a cute scene in the final episode, so at least there’s that. Bachou’s admiration of Hakufu didn’t really strike me as anything remotely romantic, which makes Kan’u x Gentoku all that’s really there for yuri fans this season.

Besides Bachou, there were a few new characters (like Soujin) or characters that finally received some of the spotlight (like Kyocho), but they’re just supporting characters that don’t have too much of an impact. And let me talk about that villain for a second. Without revealing their identity, one of their powers is the ability to control animals, so they’re basically an evil version of The Dog Whisperer, and I kind of liked it. What’s not to like about Kan’u fighting a tiger?

Characters like Hakufu and Mou are still around and are still important to the story, yet the story no longer solely revolves around them, and with several other entertaining characters at this series’ disposal, I’m cool with that. But can Kan’u and Gentoku get some more quality time together? Pretty please?

Moving on to the animation and music, not much has changed here. The battles in Xtreme Xecutor might look slightly better in some ways, but since this aired a couple of years after Great Guardians, that’s to be expected. I felt like the music was still unremarkable and that it didn’t add a lot to the show. But who’s here for the music? Anyone? No? Didn’t think so. 😀

Overall, Ikkitousen: Xtreme Xecutor (so edgy :P) is what we thought it was: another excuse to have mostly naked schoolgirls fight each other. That’s not a bad thing. The series seems to embrace that fact and plays to its strengths, but it is what it is. This season wasn’t my favorite season of Ikkitousen yet it wasn’t my least favorite either. It’s just a slightly different take on a tried-and-true formula, and fans of the series will probably enjoy it. 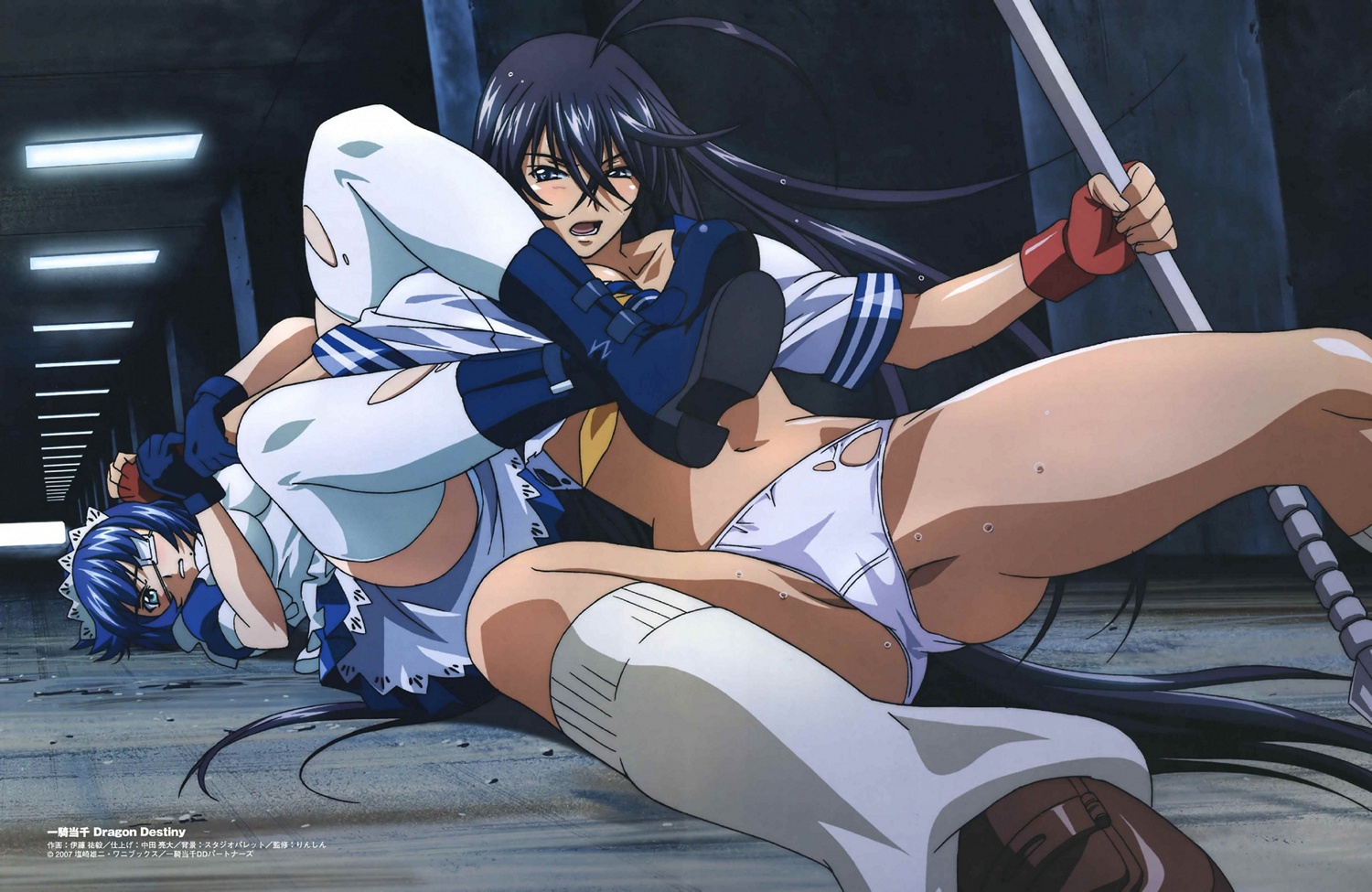