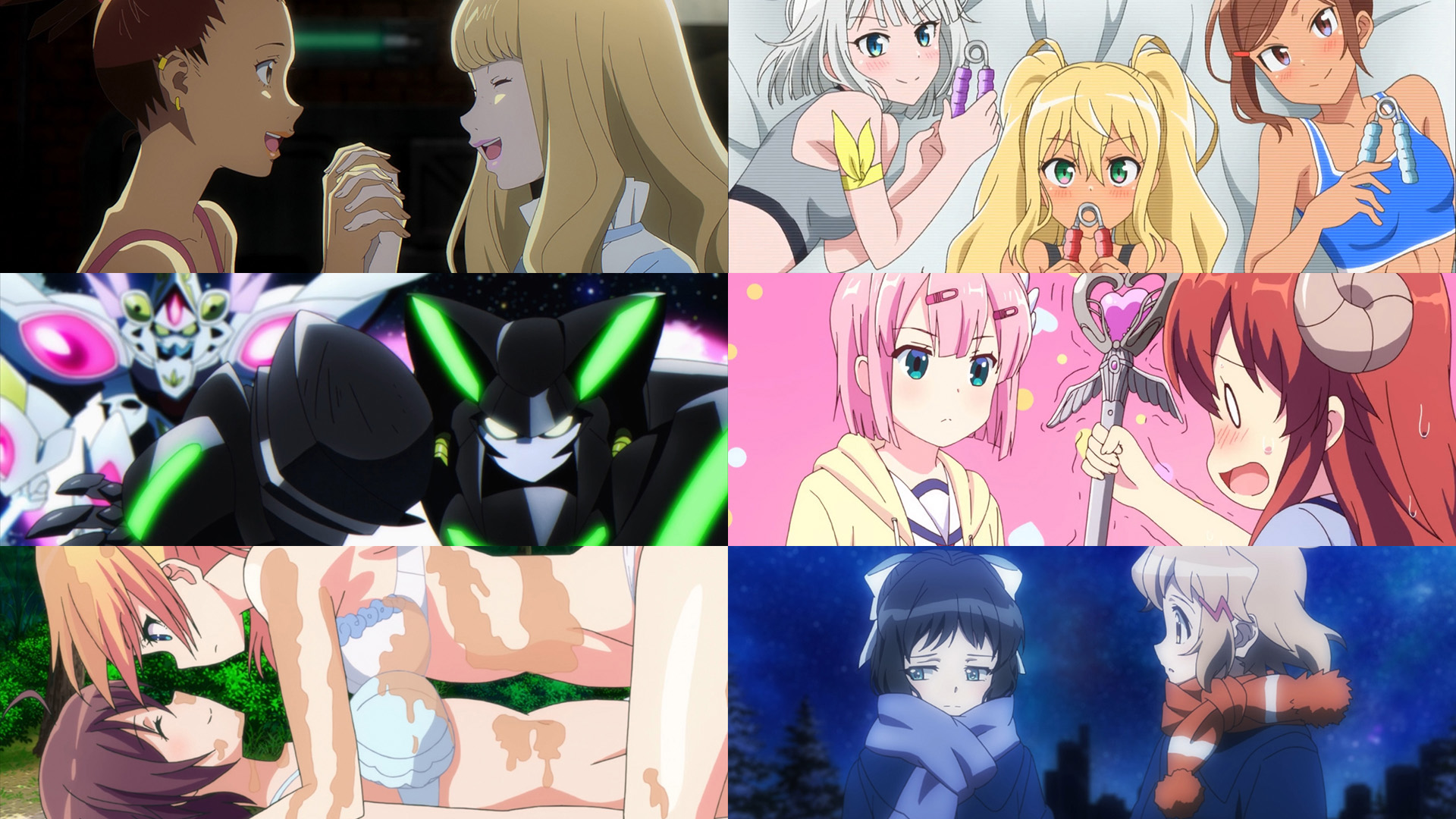 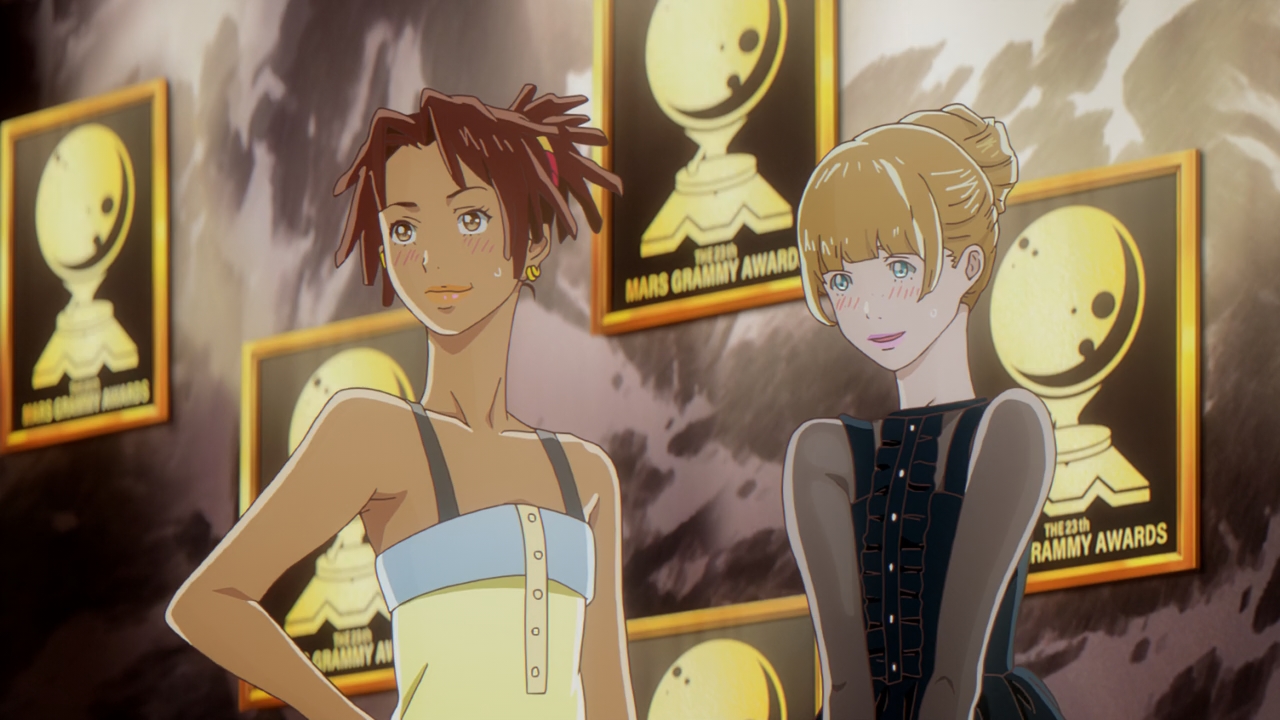 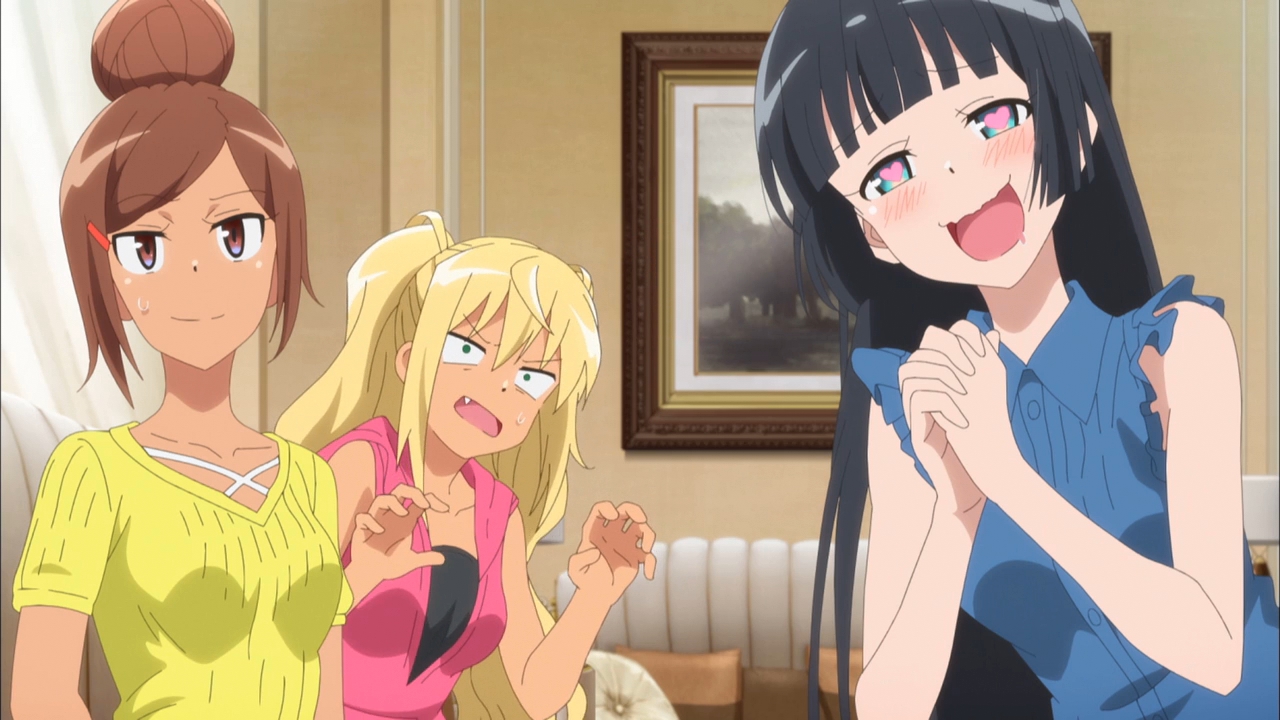 This anime had an unusual premise, and it looked promising early on, but I think it really did turn out to be one of the more entertaining anime of the summer season. You’d think that an anime centering around physical fitness would get tired or boring at some point, yet this anime had a great way of mixing things up and finding ways to keep things fresh, and to top it all off, it’s super educational about all sorts of fitness-related activities. If you think that last part doesn’t sound like it’d be very entertaining, you’d be wrong!

This is another in a long line of Doga Kobo comedy anime success stories, and despite the unique subject material, I think it doesn’t feel that different from what you’d expect from Doga Kobo. The comedy and characters work hand-in-hand extremely well, and the show’s quirky charms were really easy to love. It’s just one of those shows that’s goofy as hell, but it simply works. Barnold Shortsinator? Jason Sgatham? Comrade Poutine? So stupid, but it’s so much fun.

As you’d expect, there is some fanservice here, but it works both ways, since Machio spends like half the time in speedos, so Hibiki and the girls aren’t the only ones showing a little skin every now and then. Hibiki and Akemi were especially fun characters, and the other characters compliment them (and each other) very well. Considering how much dumb fun Dumbbell was, I’m really hoping this gets a second season, and it helps that this might be as entertaining a way to get in better shape as you’re going to find. 😛 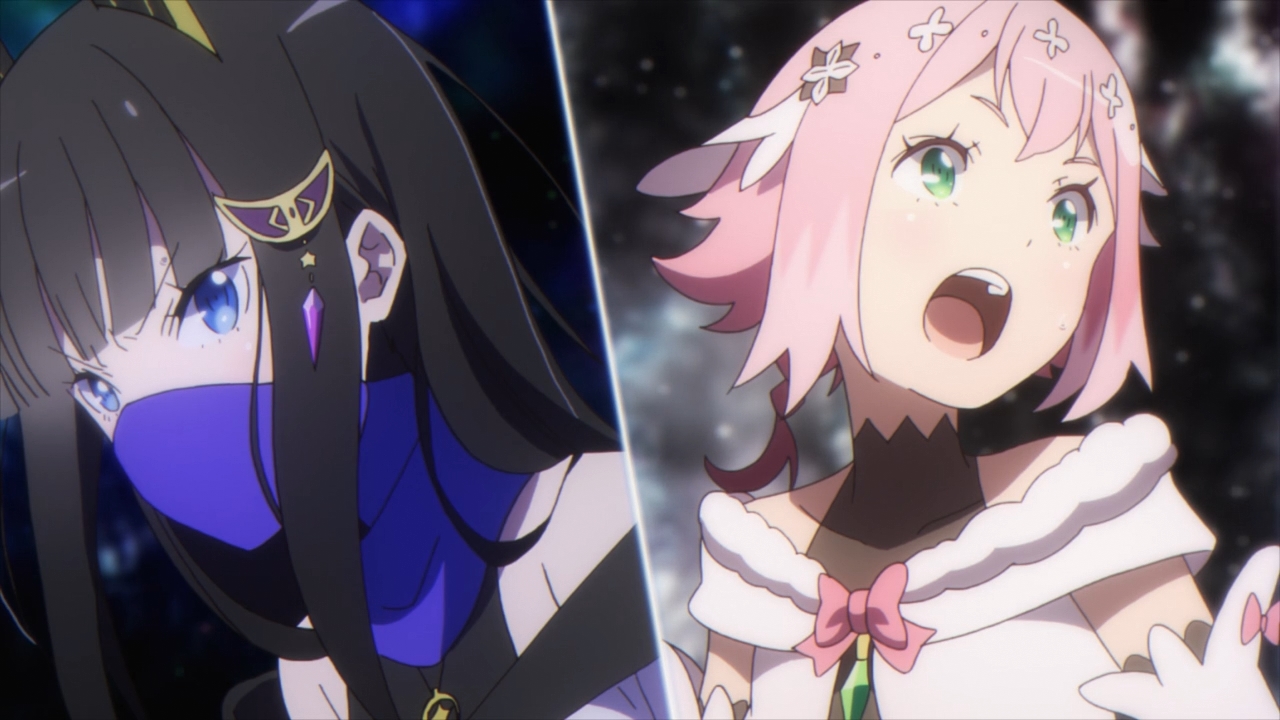 We’ve actually already reviewed Granbelm, so I won’t talk too much about it here. This show has a criminally low score on MAL, and it perplexes me to no end, considering I’m really tempted to score this as an 8.5. If you view it as a magical girl anime, I think it ends up outshining recent efforts like Lostorage Conflated WIXOSS, Nanoha: Detonation, and Symphogear XV, as well as putting a girl-focused mecha anime like Rinne no Lagrange to shame.

For most of the season, the story seemed pretty straightfoward, but as we should all know by now, things usually aren’t that simple when it comes to magical girl anime, and I feel like this anime got better and better as the season wore on. I thought that the story was simple yet surprisingly good, but I definitely don’t want to spoil anything by saying too much about it. Some magical girl anime are guilty of trying to overthink and overcomplicate matters when it comes to storytelling, but I think Granbelm did a really good job of infusing character development into their story, and I think the end result was more enjoyable to me than most of the magical girl anime from recent years.

In addition to the action (which is pretty epic), the characters were one of the best things about this show. When it comes to yuri, I expected a little more. You can definitely draw some MadoHomu vibes between Mangetsu and Ernesta, but I don’t think Nexus takes it as far as Shaft did with everyone’s favorite magical girl pairing. Anyway, if you’re into magical girl anime, I think you should definitely check Granbelm out~ 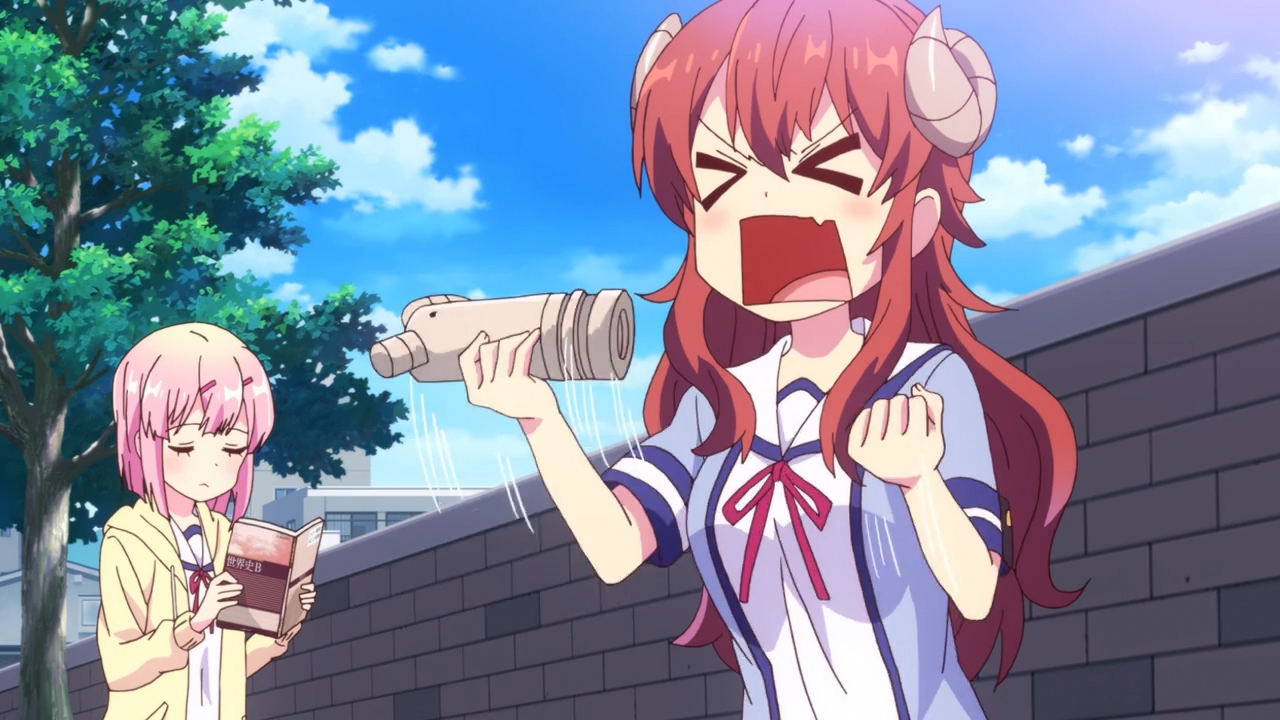 The first episode of Machikado Mazoku had me hopeful that this show could keep up the silly hijinks for an entire season, and the show actually managed to pull it off. The strange dynamic between demon girl Yuko and magical girl Momo was really fun to watch, and I’m glad that this show never really took itself seriously and didn’t actually pit the two lead characters against each other, because I’d much rather see them as frenemies anyway.

This was a funny show, and the characters were very entertaining. Momo’s deadpan replies were always great, and Shami was just the perfect foil for her, so of course they were great together. Even Yuko’s family had some amusing moments (including her ancestor), as did her friends. Later on, I don’t think Mikan, another magical girl, added that much to the show, but with such a fun main twosome, that didn’t even matter. Whether you consider Shamiko and Momo friends or enemies, you can’t deny that they made a really nice comedic team.

Overall, this anime wasn’t anything special, but it was a pretty entertaining concept, and I don’t even know if there’s enough content for it, but a second season would be something that I’d definitely welcome. There wasn’t really any yuri in this show, and that’s a disappointment, but this was still a really fun time, so it’s not the end of the world. 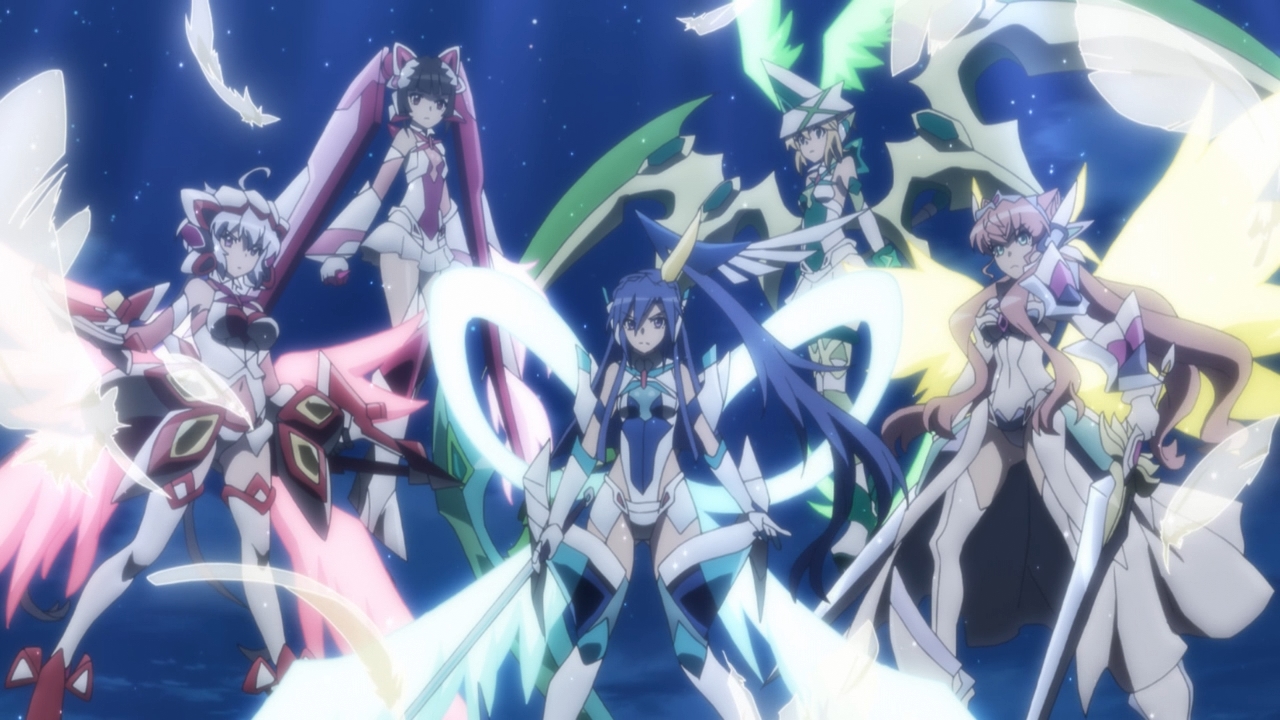 The first episode of the newest season of Symphogear, Symphogear XV, almost made me forgot how disappointed I was with AXZ, and I’m happy to say that this season is arguably the best season of Symphogear yet. At this point, you know exactly what you’re getting with this franchise, yet XV dug deep into its bag of tricks and kept upping the ante even further than previous seasons, which is saying something, considering how over-the-top this series has always been.

Pretty much all of the main cast returns, as does a new group of villains, Noble Red, and since Adam isn’t involved, they’re much better than the villains from AXZ. You kinda want to feel bad for them, but that feeling goes away pretty quickly (at least it did for me), and they return to being mostly typical villains that you don’t care that much about. At least they provide a nice challenge to Hibiki & Co., but twists and turns litter this season, and it turns out there’s more to all of this than meets the eye. Did I mention that some familiar faces return, and it’s awesome to see them back?

The story got crazier and more absurd as the season went on, but that’s when Symphogear is as its very best. For most of the season, it seems like there’s no place for yuri among all this chaos, so shippers of Shirabe x Kirika and Tsubasa x Maria will probably be disappointed. Hibiki and Miku are the pairing to watch, and even though they don’t share many cute scenes together for most of the season, that final episode should make shippers of theirs very happy. A review is coming in a few weeks, but just know that this seemed kind of like a love letter to Symphogear fans, and it was a pretty good one.

And for the record, I definitely feel like Granbelm was better than this, even if the scores are technically the same. 😛 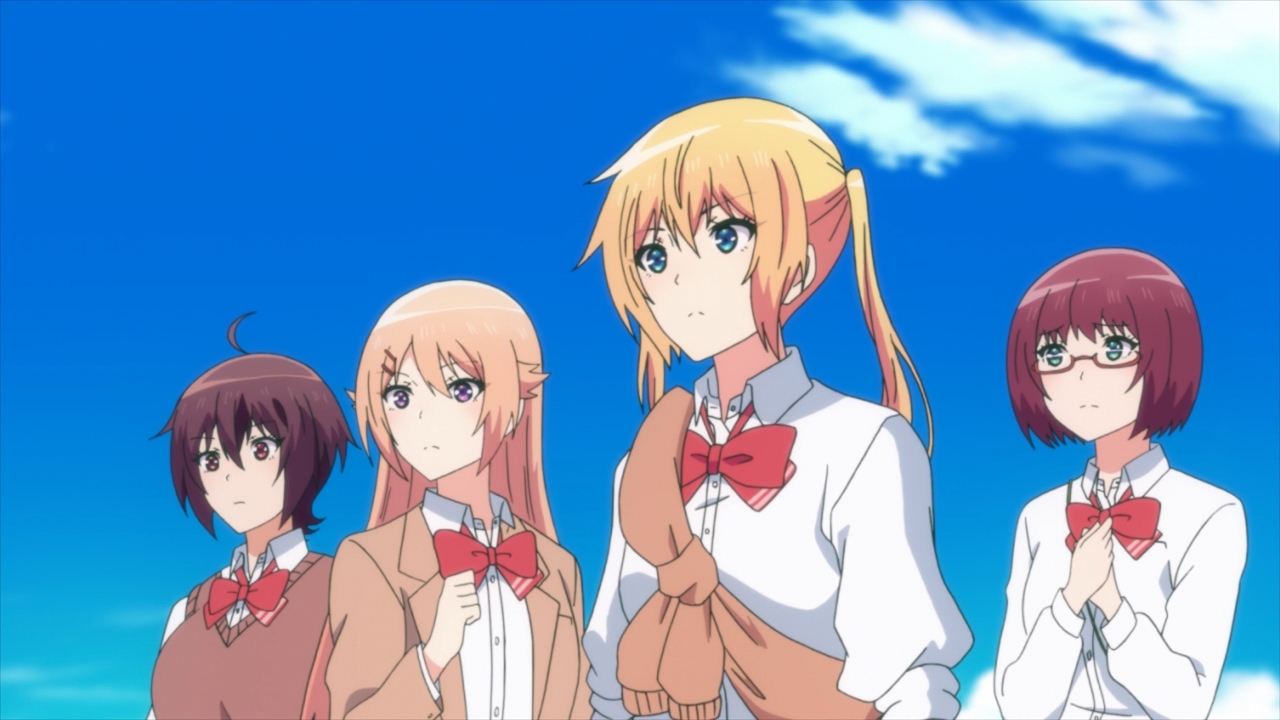 I didn’t pick up this show until a few weeks ago, but thanks to that yuri “kiss” in episode one, here it is on the list. Thanks to Lost, I like “stranded on a deserted island”-type media, but I can’t say that I liked Sounan desu ka?. The survival tips and tactics shared weren’t as informative (or anywhere near as entertaining) as the info found in Dumbbell, so this was basically Survivor in comedy anime form, minus the backstabbing and weird games.

At only about half the length of a traditional anime, a lot of the entertainment factor of this show came from the less-than-ideal situations the girls found themselves in, however, as is usually the case with these shorter shows, the fun and entertainment value was limited. The survival aspects of the show grew repetitive to me, and since there wasn’t much else to this anime—not to mention the lack of a story beyond just surviving—this was a very forgettable anime that I won’t be missing.

The characters could’ve been more charismatic, and besides what the girls have to do in the name of self-preservation, there isn’t any yuri either, so what we ultimately had here was an anime that was a halfway decent time-waster, but nothing really more than that.

Dropped: Maidens of the Savage Season, To the Abandoned Sacred Beasts