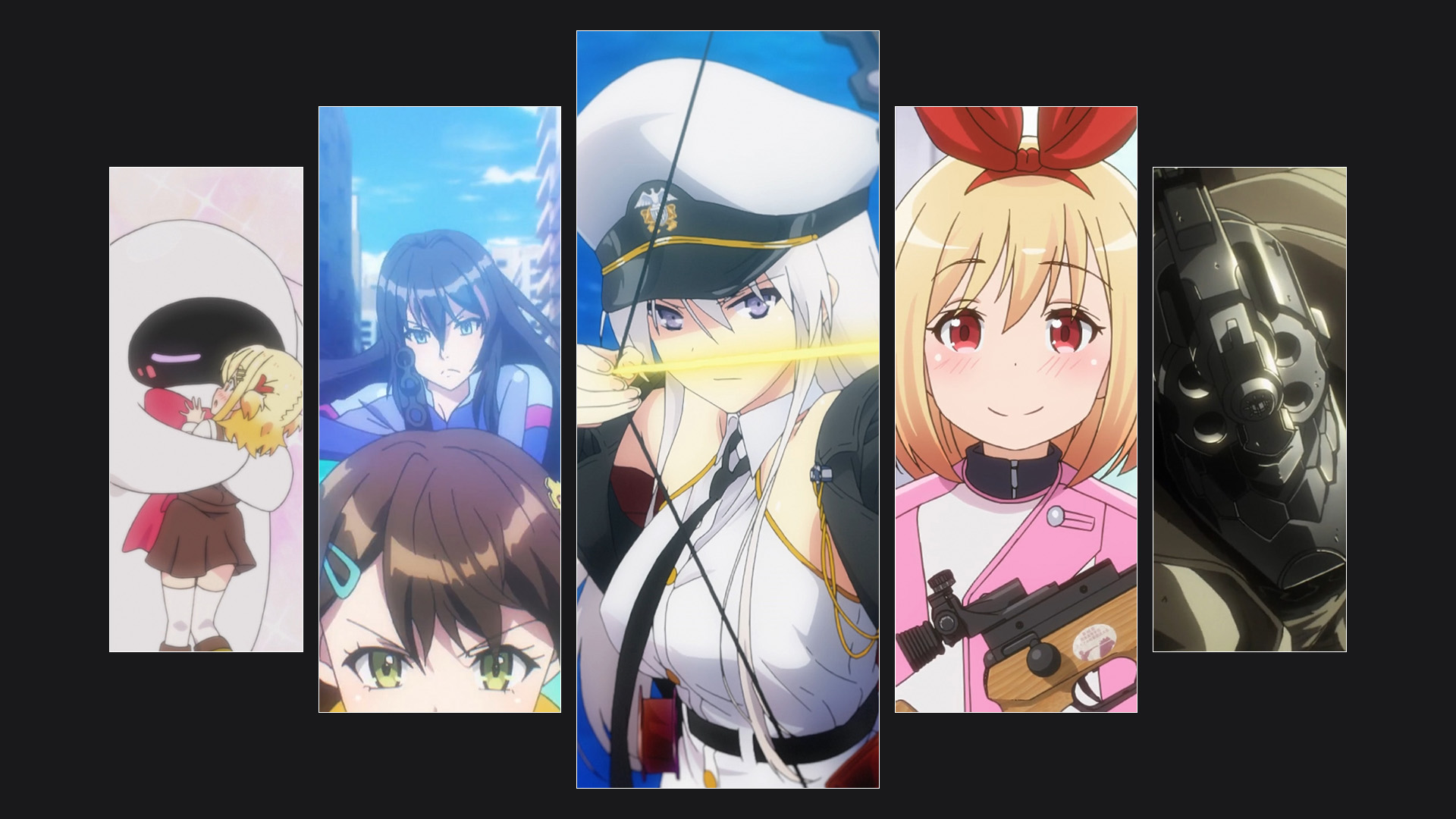 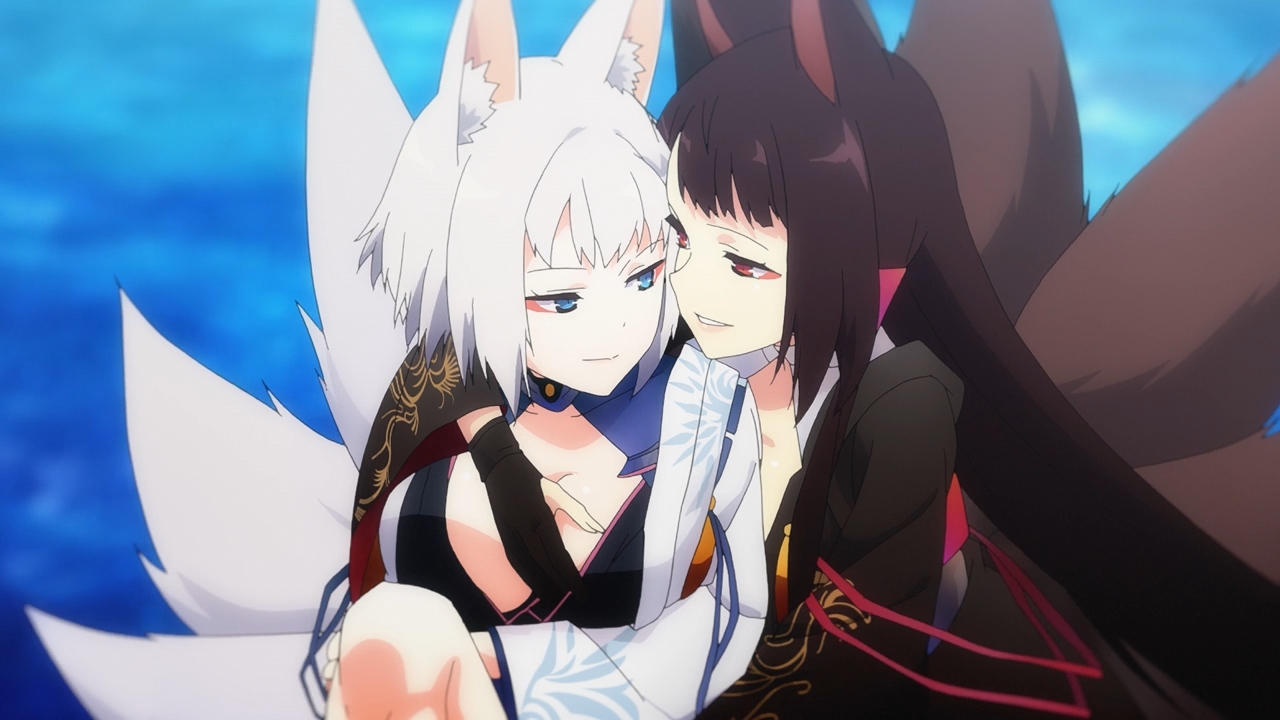 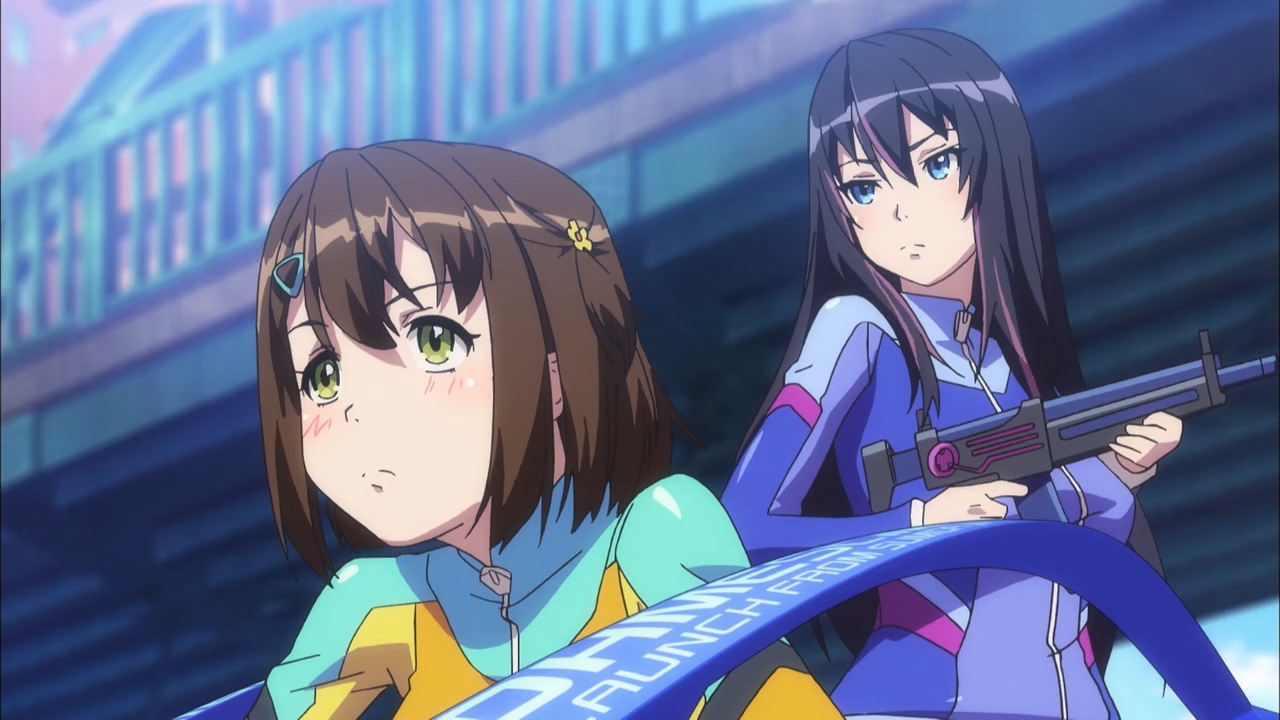 This show is directed by the same guy who directed Valkyrie Drive: Mermaid and Seikon no Qwaser, so in addition to the inevitable ecchi aspects of this show, I was hoping we’d eventually get some yuri as well. Through the first episode, things looks pretty promising, and I’m not just talking about the fanservice.

Rin and Misa already become teammates, and given Misa’s embarrassed reactions, it seems like there’ll definitely be some more subtext to come from them. We get a brief glimpse of another pair, Misuda and Fuka, and they seem like they’re going to be the gayest pair, so things are looking up. We got some other brief looks at a few other pairs, but for my money, Misa is clearly going to be Best Girl, and hopefully Rin will help bring out the best in her. The jet ski racing seems kind of fun, and when you take into account that there’s going to be girls shooting each other (in the ass) with guns, causing their suits to automatically disassemble, ecchi fans will probably love this show.

With some fanservice and some yuri in the first episode of Kandagawa Jet Girls, this seems like it’s an anime that we should be keeping an eye on. I’m not expecting this show to be anything more than a guilty pleasure, but as long as it continues to show some yuri promise, I’ll keep watching~ 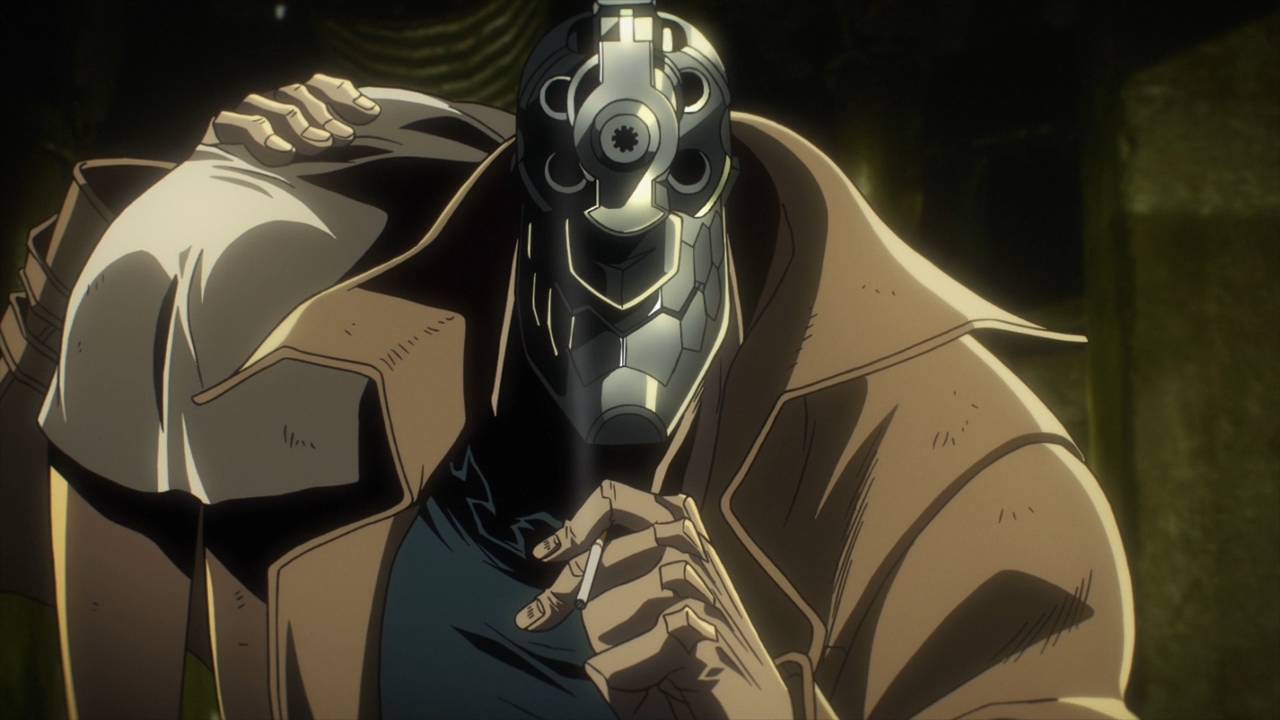 This was one of my most anticipated shows of the fall season, mostly because of the unique main character and the fact that it’s from Madhouse. The main character in this, Juuzo, has a gun for a head, so I’d say that that’s pretty unique. Anyway, he’s a badass hard-boiled detective, and although he doesn’t do much more than talk in this first episode, I can already tell I’m going to like him.

I thought that the story was pretty interesting, and all this body modification and use of robotics really stand out compared to most other anime out there. We even got a tiny glimpse of some potential laws of robotics similar to Asimov’s (that are sure to be broken), so I’m excited to see where the story goes from here. There was less action than I expected in this first episode, but I didn’t mind at all, given the interesting characters and setting. The little spurts of comedy weren’t anything we haven’t seen a million times before, but in this situation, I think it helped keep the episode from becoming too serious, so I welcome it.

Nowadays, it seems like there isn’t much originality in the anime industry, but at least in terms of plot and scenario, I really liked this first episode of No Guns Life. Shounen fans with short attention spans probably won’t embrace this as much as they should, but who cares, because the rest of us can still enjoy this seemingly more mature and deliberate anime. It certainly doesn’t hurt that this show reminded me a little bit of Cyberpunk 2077, and if that game doesn’t allow you to mod your character to have a gun for a head, I’m rioting. 😛 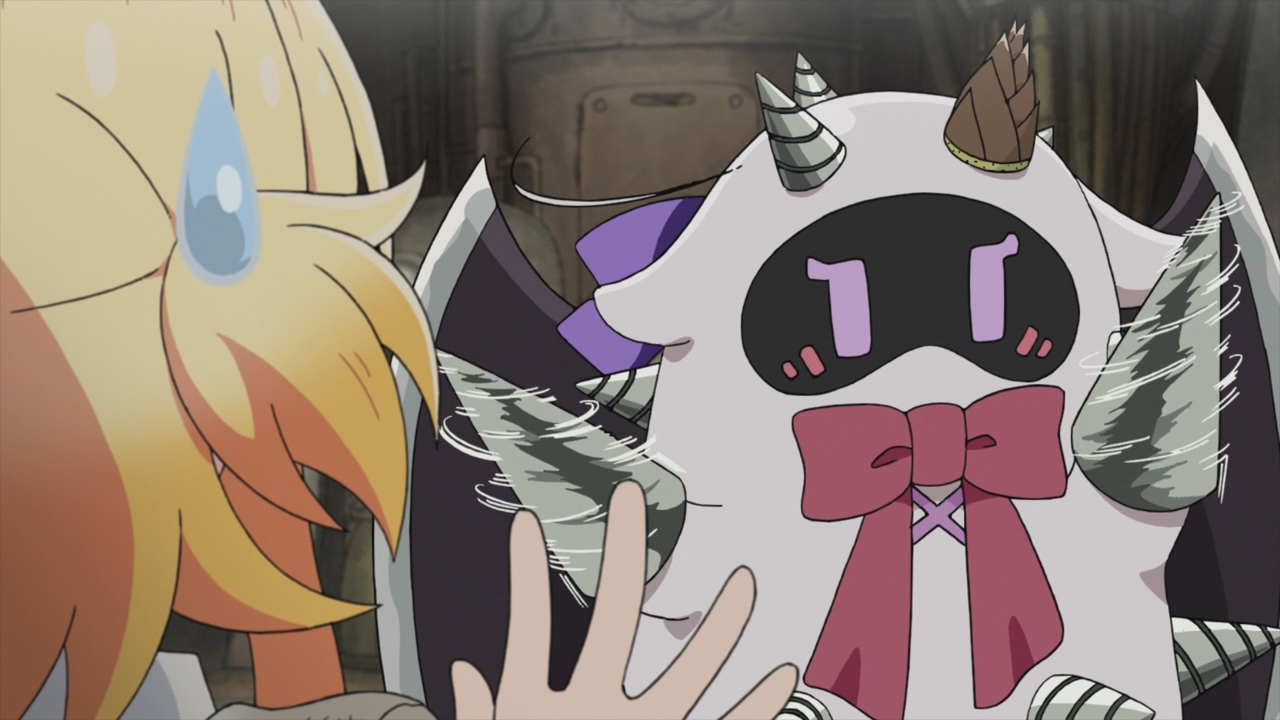 First off, I’m really disappointed that Null & Peta is a short-form anime. I was under the impression that this was going to be a full-length anime, but nope. At only five-and-a-half minutes (four-and-a-half, if you don’t count the ED), time just flies by, which is unfortunate, because I think it has a unique premise.

This is basically about a genius elementary school inventor who tries to bring back her late sister in the form of a robot, but things don’t go exactly as planned. This anime was described as a “slapstick comedy” and that describes it quite well. The jokes come early and often, and I thought this first episode was somewhat amusing. Now that I know this is a short anime, my expectations have lowered tremendously, but I’m hopeful this can still be a decent, little time waster. This show was brought to our attention because of Eku Takeshima’s presence as character designer, but it’s anyone’s guess whether this’ll actually have any yuri… 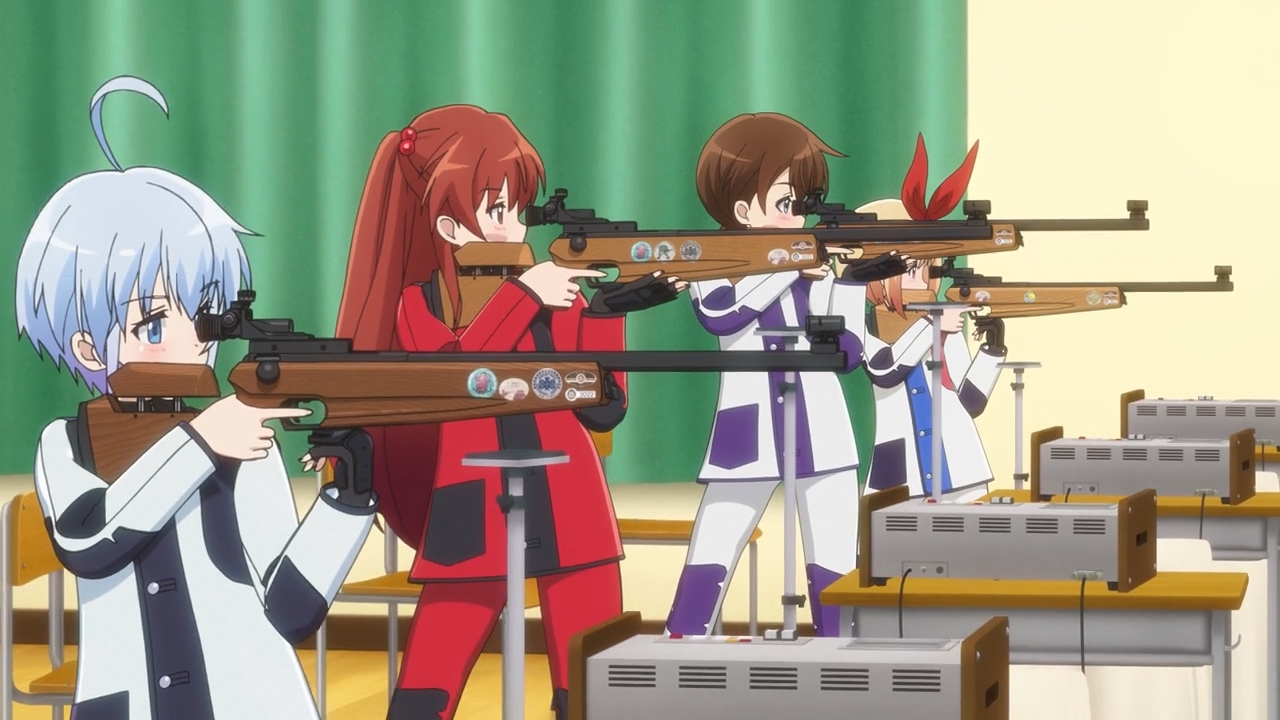 It was YR reader MarkS00N that brought this show to my attention (so if it doesn’t have enough yuri, let’s blame him instead of me :D), and seeing that it’s Studio 3Hz behind this one (Princess Principal and Flip Flappers), I was hopeful that this could be more than just your standard cute girls doing cute things anime, but the first episode didn’t inspire much confidence that that’ll be the case.

This looks to be yet another club anime, but the club in question here is a rifle shooting club, so at least that’s a little different. The cast of high school girls seem pretty by-the-books as well, and it’s probably just me, but the main character, Hikari, is already starting to annoy me with how enthusiastic she is. At least the girls are cute, but the lack of originality doesn’t help matters at all. Things also move along pretty quickly in this first episode, and it just seems to be lacking something, anything, to make it seem really worthwhile.

Hikari and Izumi have been friends since elementary, so they’re really close and the most likely yuri suspects to keep an eye on, but even Erika ends up fondling Hikari, so I guess there is hope for us yuri fans after all. I wasn’t expecting this anime to be great or anything, but I think I still expected something more entertaining than this. Comedy-wise, I thought this first episode was pretty meh, and the same applies to the rest of the show. I think Rifle is Beautiful might end up being another generic slice of life anime, but it’s only one episode, so let’s hope things get better soon.