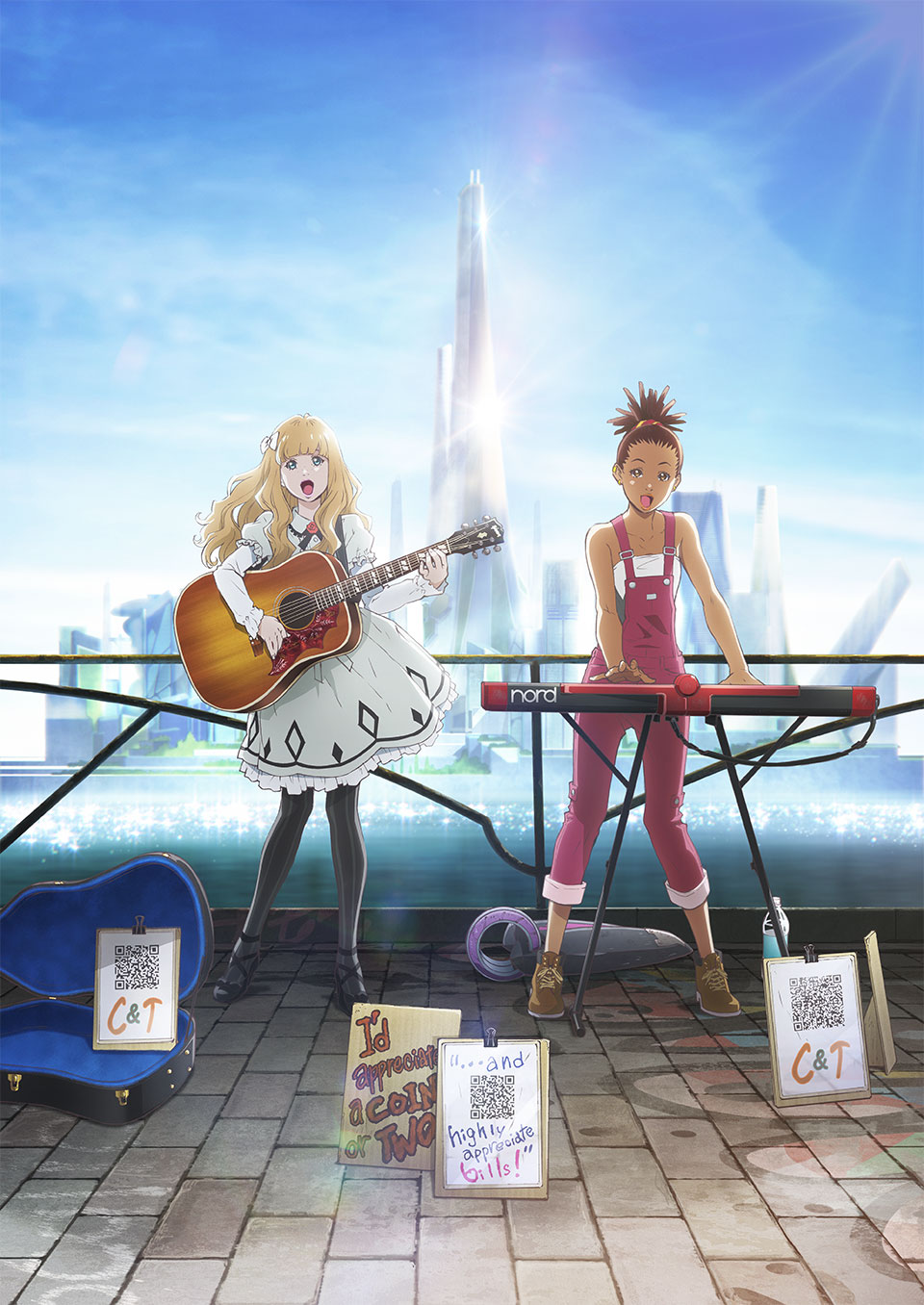 Shortly after Carole & Tuesday was announced, yuri fans got their hopes up that this would be something worth checking out, and while it’s not a yuri anime, the relationship between Carole and Tuesday was definitely one of the driving reasons why this anime was still so enjoyable~

Synopsis: Fifty years have passed since mankind began migrating to the new frontier: Mars. It’s an age where most culture is produced by AI, and people are content to be passive consumers.

There’s a girl. Scrapping a living in the metropolis of Alba City, she’s working part time while trying to become a musician. She’s always felt like something is missing. Her name is Carole.

There’s a girl. Born to a wealthy family in the provincial town of Herschel City, she dreams of becoming a musician, but nobody around her understands. She feels like the loneliest person in the world. Her name is Tuesday.

A chance meeting brings them together. They want to sing. They want to make music. Together, they feel like they just might have a chance. The two of them may only create a tiny wave. But that wave will eventually grow into something larger…

If you can look past the sci-fi tinged story (I definitely enjoyed that twist), Carole & Tuesday isn’t really that much different than your standard story of a musical act’s journey to stardom. But despite the familiarity of all that goes into rising to the top of the musical world, the story of this anime continually found ways to keep me invested in these characters. Things like scoring a record deal and filming a music video don’t sound like they should be super entertaining, but this show had an innate talent for making seemingly inconspicuous scenarios result in a whole lot of fun.

Personally, I really loved the Mars Brightest arc, which saw our main characters enter a televised singing competition in hopes of winning a record contract. It had everything you like about programs like that (such as ridiculous contestants) and brought it into anime form. But Carole and Tuesday see a lot of ups and downs on their rise to success, and I didn’t think the show was ever boring or felt like the show was just presenting us with meaningless filler. Even the little side stories that only take up a single episode are pretty well-done and further add to the overall appeal of this show. Over and over, the show just exhibits a lot of heart, and I really loved that about it.

In addition to showing Carole and Tuesday’s journey, the storyline of another aspiring singer, Angela, runs parallel to our two main characters, and their tactics couldn’t be more different from one another. Being a very different kind of character than Carole or Tuesday, Angela encounters many of the same problems as the main duo, as well as some unique challenges that add a little more drama and intrigue to the story. I think the show needed someone like her (and her handlers), and her rivalry with Carole and Tuesday was a nice shot in the arm that brought a lot to the show.

Eventually, this anime’s lack of drama sorts itself out, and we deal with topics like stalking and anti-migrant attitudes. Clearly, this is quite the departure from the carefree days of trying to produce a music video on the cheap, but especially in today’s global climate, that an anime would go there is certainly something. I can’t say that I enjoyed storylines like the political election as much as the more lighthearted parts of the story, yet they were a welcome change of pace.

That election storyline was the weakest link to me, if only because it didn’t directly involve any of the main characters. I guess I just enjoyed seeing the girls chase their dreams a lot more than the morally corrupt tactics of Team Valerie, yet that wasn’t enough to change my very positive feelings about this show. The characters’ love of music is infectious, and for all of the idol anime out there, I’m really glad there are other types of music anime that bring something a little more fresh to the table.

To be honest, I don’t think either Carole or Tuesday were great characters themselves, but together, that’s where the real magic emerges. Right off the bat, their chemistry is really great, and that continues for the entire duration of the show. At no point did you doubt that their relationship was anything other than rock solid, and even though their relationship doesn’t turn into romance, it’s still a very deep and personal friendship that ties these two together. So while I didn’t quite love Carole or Tuesday, when I compare them to the likes of Honoka from Love Live! and Karen from Revue Starlight, I think they’re still a step up from the main characters of other music anime. 😛

Partway through the season, we’re introduced to a girl that becomes this series’ de facto yuri character, but instead of a sweet and innocent girl, she just happens to be a total creepster. And I’m not even mad about that. It was an interesting twist that I don’t think we see enough, and I thought that she was a pretty fascinating character, even though she was only around for four episodes. In episode four, we meet an actual lesbian couple (who we learn are planning to get married), but they’re insignificant characters that are gone before you know it. It’s the inclusion of characters like these that’s the real kicker though, and for the most part, I think there was a positive portayal of LGBTQ characters in this show.

Before I finish talking about the yuri, there is a bump or two in the road, however. At one point, Tuesday seemingly develops a short-lived crush on a male reporter that’s investigating her family, and to a lesser extent, the close friendship between Carole and a guy she grew up with in a refugee camp on Earth could be something that ruffles some feathers. But these are minor issues that didn’t detract from my enjoyment of this anime, and I think a lot of people will feel the same way.

What really impressed me was how memorable and full of life the long list of supporting characters were. In most other anime, a majority of the supporting characters are forgettable throwaways that you don’t think too much about, but here, a lot of the supporting characters are surprisingly full of charisma and charm. For me, I started to care a little bit about some of the characters that didn’t get a lot of screen time, and I think that’s a pretty impressive feat. Something else to point out was how diverse the cast was. Over the course of the twenty-four episodes, we’re introduced to many different people of color, and that’s something we don’t really see a lot of in a typical anime. Again, people here are treated with respect and dignity, so kudos to the creators for that.

Overall, the characters in Carole & Tuesday prove that quantity doesn’t necessarily mean a lack of quality, and from Carole and Tuesday all the way down to the likes of Floris and Desmond, a lot of care was put into creating engaging and believable characters. Similar to other music anime like Love Live!, the yuri subtext is there, and if you can temper your expectations a little, I think this show has a lot to offer yuri fans.

Even though this wasn’t an action anime that had over-the-top fight scenes like other shows, I can’t deny that it still looked really good. This anime is from Bones, probably one of the best anime studios out there, and with some support from Netflix, this anime definitely wasn’t lacking in production values. The gorgeous backgrounds and the character designs are what stood out to me the most (don’t forget about Pyotr’s dancing), and when you consider that the chief director was Shinichiro Watanabe (Cowboy Bebop, Samurai Champloo), it makes total sense why this anime was so easy on the eyes. But as nice as the art and animation were, this is a music anime, and that’s where it’s at its best~

This anime included a TON of original music, and in an interesting twist, almost all of those songs were sung in English. It was pretty weird seeing everyone go from speaking Japanese to singing in perfect English, but it was only a minor issue, and I got over it pretty quickly. It must’ve been tough to gather so many talented singers for this project, and even though there are a lot of different genres of music at play here, it all came together amazingly well. I thought there were some genuinely good songs in this anime, and if I had come across them on Spotify or somewhere else, I probably wouldn’t have thought that they came from an anime. I guess that’s a weird compliment, but take a listen at some of these songs and judge for yourself.

But if we’re being honest, even those songs are good, aren’t they?!

Carole and Tuesday’s music sits firmly in singer-songwriter territory, and I’d be lying if I said that I truly loved a majority of their songs (our “What We’re Listening to This Week” series pegs us as preferring other genres), but that’s just personal preference speaking. Here are a few of the songs they sang.

Just the sheer amount of effort that went into the musical aspects of this anime is impressive. Compared to most other music anime, this is in a completely different league as far as ambition and attention to detail, and I think most people are going to come away impressed by what this show was able to accomplish.

Carole & Tuesday might not have been the yuri romance anime we were all hoping for, yet I still think it was one of my favorite yuri-ish anime (and favorite anime in general) of 2019. There’s just so much to like in this show. The charming characters, the music, the animation, the uplifting story, etc. I don’t think you have to be a music anime fan in order to enjoy this show, though I think the ones that already are fans will probably love it. I’d easily take something like this over another season of Love Live! any day, and that score of 8 is a little misleading, since I’d actually score it a little higher than that. 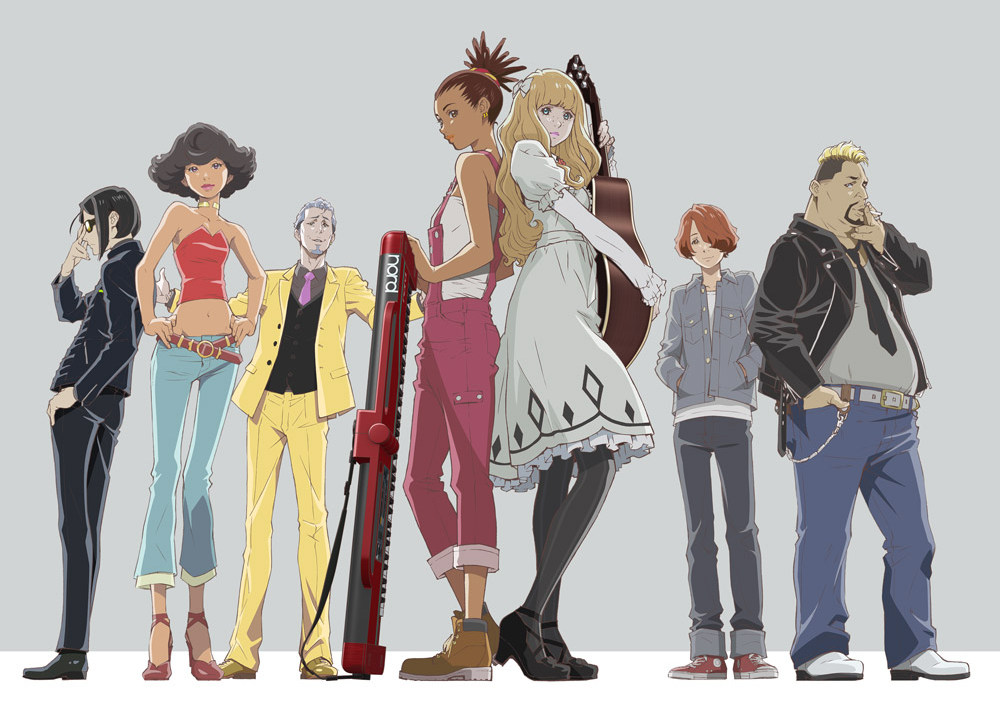