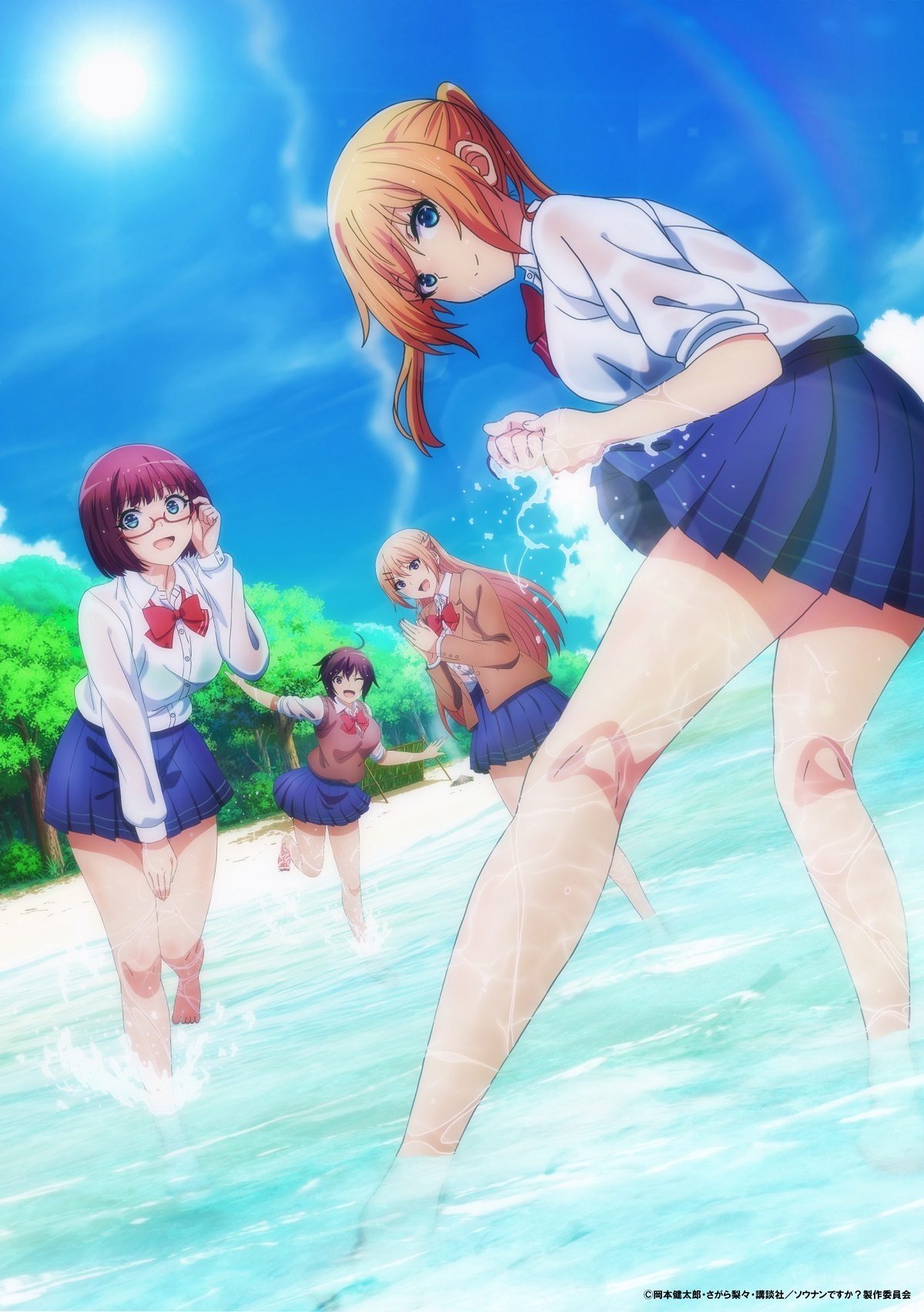 I originally wasn’t planning to review this, just because the three or so yuri scenes were brief and were just for laughs, but who am I to turn down content? So since I already watched it, here’s a review anyway. 😛

Synopsis: After a school trip goes terribly wrong, Homare Onishima, Shion Kujou, Asuka Suzumori, and Mutsu Amatani are left stranded on a deserted island. While Shion, Asuka, and Mutsu are frightened and desperate, Homare seems strangely calm. Fortunately for the group, this isn’t the first time she’s been stranded! Homare spent her childhood training with her survivalist father all over the world, climbing cliffs, trapping prey, building shelters, and obtaining valuable nutrition from moose testicles. To Homare, surviving on an uninhabited island with a slim chance of rescue is child’s play. The only problem is the other three.

As Homare shamelessly guides her classmates through the finer points of survival, including drinking fish blood and eating cicadas, the girls start to realize that being stranded might not be as bad as they had imagined.

As a short anime, you could probably infer that Sounan Desu ka? wasn’t going to have a great story, and you’d be right. At roughly ten-and-a-half minutes per episode, the story goes pretty much nowhere. The girls have trouble at sea during a class trip and wind up on a deserted island. Over the course of the next eleven-and-a-half episodes, they just do what they have to do in order to survive on the island. That’s pretty much it.

There’s very little drama or any kind of story progression, so unless you’re actually stuck on a deserted island and need some quick and dirty survival tips (which this show has in abundance), you might find this anime to be too uneventful. For an entertainment property, perhaps the only thing worse than being bad is being boring, and to me, that’s kind of what Sounan Desu ka? is.

It never gets explained but, what happened to everyone else? I mean, there had to have been other students on the plane the girls were on, so did they just die? Because it makes the show seem a lot more exciting, I’m going to assume that the other students were eaten alive by sharks. It seems a lot more fun now! 😀

“I guess all of that is better than nothing at all, but I’m usually not too enthused when the only yuri an anime has to offer is brief and strictly for comedic effect.”

I just expected something else to happen, but the entire season is mostly composed of small things like collecting food. Aside from Shion getting lost, you could say the climax of the entire season was Homare and Shion giving each other an enema in order to prevent dehydration. Did I mention they did this with their mouths? It’s straight outta the Bear Grylls playbook, but at least he didn’t use his mouth. At least not yet… 😛

So what I’m basically saying is, the story is almost non-existent. If it weren’t for a last-second appearance from Homare’s dad, the show would’ve just ended with the girls still stuck on the island with no hope in sight. There wasn’t even a hatch or a smoke monster or anything like that! Oh, and the comedy is nothing to write home about. *sighs*

Homare gets a pass for being the teenage female Bear Grylls wannabe, so at least her survival knowledge makes her a little interesting, but the others aren’t as fortunate. Asuka (sporty and outgoing), Mutsu (smart, nerdy-type), and Shion (the princess) aren’t the most entertaining or likable of characters, and most of their contributions come from their struggle to adapt to their situation. After chuckling at their incompetence a couple of times, it just got old to me, yet that’s pretty much all there is to these characters, with their different personalities not making a whole lot of difference.

I mentioned brief yuri moments, and they are as follows. Mutsu can’t produce saliva, so to avoid dehydration, Homare gives Mutsu some of hers, using her mouth. In another episode, Shion drops a pail of makeshift sunscreen on Homare, so Asuka crawls under Homare to avoid it going to waste. And in the final episode, the aforementioned oral enema involving Homare and Shion. I guess all of that is better than nothing at all, but I’m usually not too enthused when the only yuri an anime has to offer is brief and strictly for comedic effect.

But for a show this one-dimensional, you probably need really charming characters, and this show just doesn’t have characters like that. They’re not bad as much as they are bland, and I don’t think they were anywhere near good enough to make up for the uninspired story.

Since I already mentioned (like a million times) that not much happens, there isn’t a lot to say about the animation, especially since this is a short anime. We don’t see too much of the tropical environment, which seems like a wasted opportunity, so I’d say the visuals are average at best. There’s some fanservice to be found here, yet it’s nothing egregious or a lot more than you’d expect.

Like the other aspects of the show, the music didn’t contribute a lot, and I didn’t notice it too much. You probably could’ve swapped it out for the background music for almost any other anime, and I might’ve not even have noticed. In other words, it’s more or less inconsequential.

The best compliment I can give Sounan Desu ka? is: if you’re stranded on a deserted island and can only watch one anime, make it this. Not because it’s entertaining, but because the tidbits of survival knowledge could save your life. Not the best compliment, but a compliment nonetheless. 😛

Had this been a full-length anime, I would’ve dropped it, and I know I scored this show a 5 in our Final Thoughts post, but for this review, I watched it again, and I’m going even lower now. A few tiny specks of yuri are nowhere near enough to keep me entertained, and the rest of the show is also subpar, so I’ll give it a… 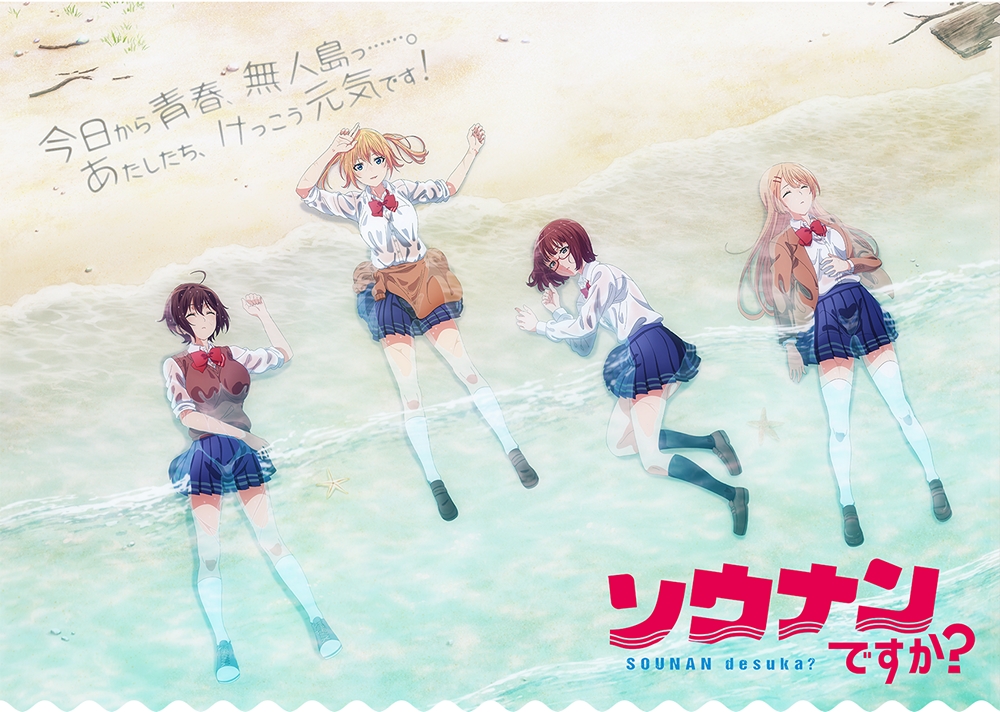