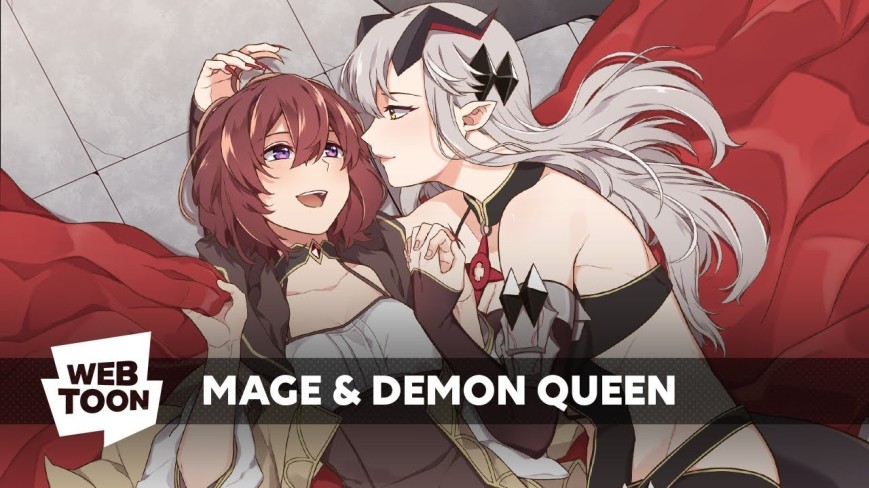 Adventurers seek to take the demon queen’s head, but a love-struck young female mage wishes to take her hand. Join us won’t you, for this bawdy tale of love and persistence set inside a real-life RPG.

This webtoon features the many futile attempts of thirsty mage Malori trying to not only defeat the so called ruthless demon queen Velversoa, but also to win her heart and hand in marriage. Sounds like a promising setup, huh?

To go a bit more in detail, what we get here is a fantasy story set in a world in which humans and demons have fought against and hated each other for decades. In an attempt to win the war, humans have started to train young adventurers in numerous fields in order to get strong enough to defeat the mightiest demon of them all, the demon queen, Velverosa, who’s living in her heavily guarded demon tower.

What sounds like quite the heavy and serious story actually feels more like of a parody of this specific demons vs humans kind of setup. Not only is the comedy aspect of this webtoon the most prominent feature, the whole story is setup as an RPG game with the characters having to level up, learn specific skills, and defeat minor enemies to get to the boss (the demon queen). In general, even if the main premise is supposed to be the power struggle between the two factions, the main focus is mostly set on a whole other power struggle, that being between the demon queen herself and the little mage Malori.

To be honest, I didn’t really know what to expect when I started reading this webtoon. It all felt a bit too wacky in the beginning, as all we saw in the first few chapters was Malori basically throwing corny lines at Velverosa in her silly attempts to swoon “her queen”. The story felt a little thin, and I feared that this would be how most of the chapters play out, just a thirsty airhead character trying to get the overpowered tsundere. A fun read, but nothing more.

In a way, I was right, since I arrived at chapter 92 and we still can’t say that things have changed too much between the two. On the other hand, I couldn’t have been more wrong. The story evolved into so much more, the main characters actually developed into something that is more than just two pretty faces with linear motives, and even the side characters grew on me. While this fantasy world really just seemed like a barebones structure with some fun ideas here and there at first, it’s starting to become more and more fleshed out, and I really love that. Plus, what seemed to be some wacky comedy in the beginning actually evolved into some topnotch entertainment, once you actually get to know the characters better. Brilliant implementations of memes, game references, and just some awesome buildups for honestly some of the funniest moments in manga history for me. Even though you start to know the characters to the point you already know when to anticipate a joke or funny moment that’s coming up, this author kept surprising me with the level of creativity, and at times, even crudeness. I love it!

Now, coming to the yuri aspect of it all, there’s good and bad. Starting with the bad, I can sum this up in one sentence: It’s such a slow-burn kind of romance that it’s physically hurting me. I mean, we’re at chapter 92 and they haven’t even kissed yet. Worst thing is, I don’t even think that it’s happening anytime soon. How frustrating! Then again, it just makes the moment when it eventually happens so much better. I really just hope that we’ll get there eventually.

Other than that, there’s only good things left to say about this. The character dynamics are simply wonderful, and the author manages to keep the romance alive while also throwing in the most hilarious and weird interactions between Velverosa and Malori. It’s such a great mix of comedy and romance that I didn’t even know I wanted until now.

Plus, the characters look stunning to say the least, with an art style that is just so pleasing to look at. The fact that the whole thing is in full color makes it even better~

While you might be thrown off by the design of some of the characters (probably mostly the demons, with their super skimpy clothing and such), the story is actually surprisingly tame for the straight up boobs in your face kind of character design for Velverosa (among others). This is definitely not the kind of story you read to get your ecchi yuri fix or even to find your typical girl meets girl kind of romance. This one you read to laugh, and most of all, to find something that is simply different from what you usually find when it comes to yuri works. It’s unique, charming, and most of all, hilarious. I can’t wait to read more!

I just found out there’s actually a trailer with more than 7 million views, holy shit!