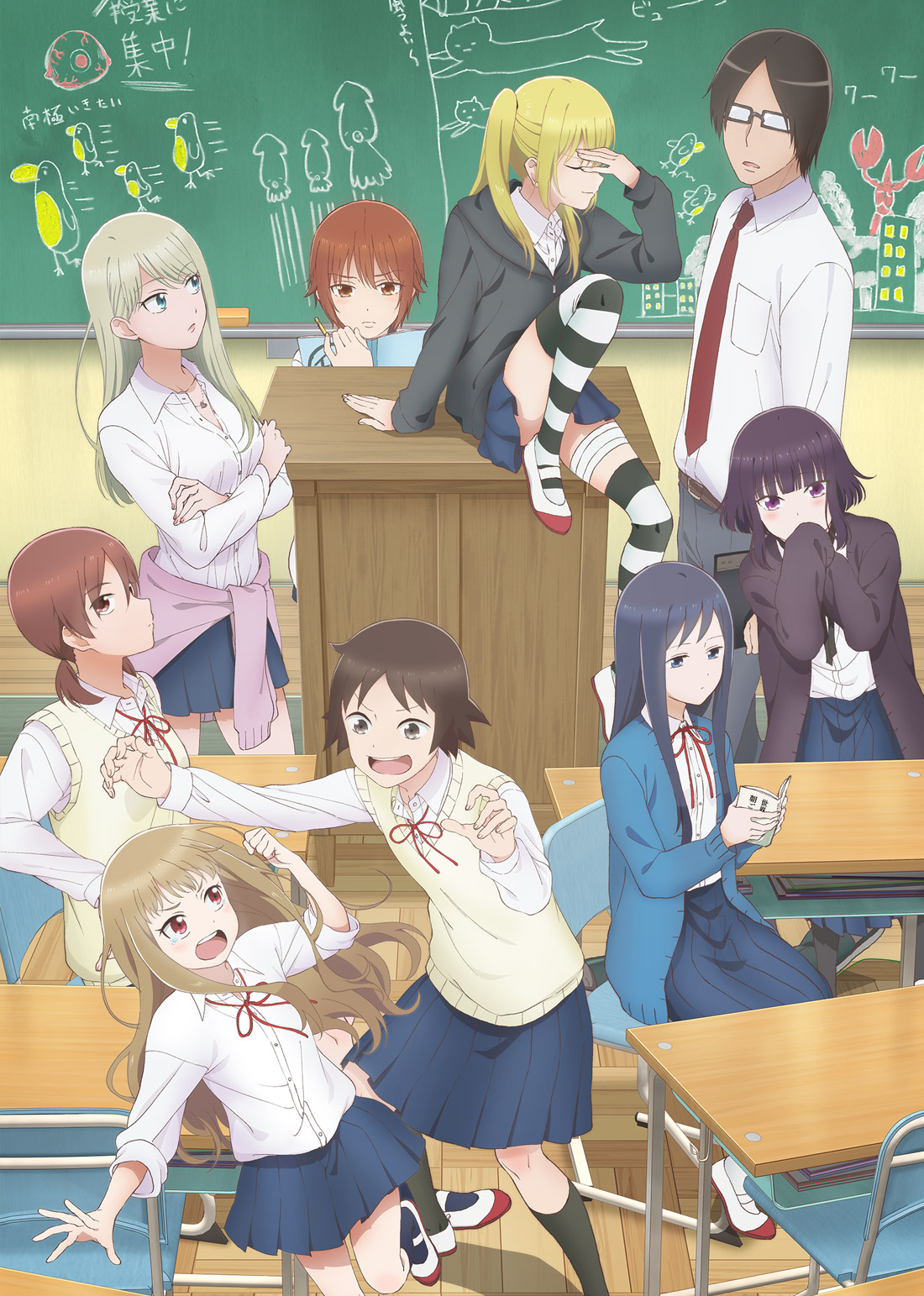 Synopsis: As she heads off to her entrance ceremony at Sainotama Girls’ High School, Akane Kikuchi muses over her grade school dream of becoming a manga artist and the lack of progress that she has made. When she finally arrives at school, she is surprised to learn that she is once again in the same class as her two best friends: the deadpan and emotionless Shiori Saginomiya and the hyperactive and ridiculous Nozomu Tanaka. Tanaka then comes to the obvious realization that she can’t achieve her grade school dream of being popular with the boys and getting a boyfriend by going to an all-girls high school.

In desperation, she begins asking the girls in her class to introduce her to their guy friends. Her classmates, however, are anything but ordinary. From a grandmother-loving loli to a reclusive chuunibyou to an overly analytical stalker, each one is given a fitting nickname by Tanaka to accentuate their weirdness. And so begin the wasteful days of these high school girls, each day kicked off with a simple question: “Hey, wanna hear something amazing?”

I’m pretty disappointed that I let this anime slip right past me last summer. But once again, the YR readers came to the rescue and let me know about it, and I’m glad that they did, because I enjoyed this quite a bit~

That said, the story was not one of the major reasons why I enjoyed this anime, because there isn’t much in the way of story. Each episode brings with it new situations for our girls to demonstrate their quirkiness/stupidity, so there isn’t much carryover from episode to episode, besides the aspirations of the main characters. Akane wants to be a mangaka, Shiori wants to be a microbiologist, and Nozomu wants to be popular with guys. Akane’s and Shiori’s personalities pretty much match their desired occupations, yet Nozomu is another story, but more about her and the others later.

In some ways, Wasteful Days of High School Girl kind of reminds me of Asobi Asobase and Nichijou. It’s a similar kind of ridiculous comedy, though it’s definitely less outlandish than the former and simply not on the level of the latter (not much is). Normally, I think I’d prefer at least some semblance of story with my comedy anime, yet this anime is funny enough that I’m perfectly fine with the paper-thin plot. So instead of me trying to make something out of nothing and stretching this section out, let’s just keep this review moving along. 😛

First off, most of the characters are given nicknames that are used more than their real names, so I’ll call them by their nicknames as well. Akane is named “Ota” (since she’s an otaku), Shiori is “Robo” (since she doesn’t show emotion), Nozomu is “Baka” (since she’s an idiot), Minami is “Yamai” (since it’s similar to her last name and she’s a chuunibyou), Saku is “Loli” (since she looks like she’s in elementary), Kanade is “Majime” (since she’s often overly serious), and Hisui is “Majo” (since she’s into the occult).

The main trio of Ota, Robo, and Baka each have enjoyable personalities, but as much as I liked watching Ota’s BL eyes and Robo’s bizarre fascination with microorganisms, Baka absolutely stole the show for me. In an anime full of colorful characters, she’s far and away the most ridiculous of the bunch, and I guess you can say that she sets the tone for the entire show. I’m sure some people are going to be annoyed to death by her, and while I acknowledge that she’s an acquired taste (Ota is more favorited on MAL than Baka), I absolutely loved how batshit crazy she was. She’s not cute, she’s not sweet, she’s just an unfiltered moron, and I love her for that.

It’s mandatory to include at least one loli character in each anime, so this anime presents us with Loli, the most adorable girl you’re going to find in this show. She’s similar to many other lolis out there in that she has a complex about her size, but what makes her even cuter is just how pure and innocent she is. She’s very much grandma’s girl, so you can imagine how she manages to get along with someone like Baka. Spoiler: not well.

Given her delusional nature, Yamai doesn’t socialize with the other girls too often, but even she doesn’t buy her act, which makes it even funnier. Besides Baka, Yamai was probably my favorite character, and I’m glad she still managed to get her share of the spotlight. At the midway point of the season, Majo joins the fun, and while she doesn’t get anywhere near as much screen time as the other girls, her love of the occult and everything morbid helps make her yet another entertaining supporting character.

But as entertaining as these characters are, my main reasoning for watching this anime was for the yuri, and while the show isn’t great in this regard, the yuri that’s present is still a welcome bonus.

In episode five, a transfer student arrives, and so does the yuri that I’d been hearing about. Lily is the character in question, and right off the bat, she admits that her favorite things are girls (while guys are her least favorite things). Needless to say, this declaration made me super hopeful that she’d be the over-the-top yuri character that this over-the-top show needed, but I thought that she could’ve been involved in many more gay moments. She does all the things that you’d expect a lesbian character to do—such as fondling other girls—but compared to other yuri characters from other anime, there’s a little more to her, so her gayness is a little more subtle.

But Lily isn’t the only character in this anime that shows some interest in the same sex. Majime eventually tries to get closer to Robo, but she goes about it in a peculiar way, so her admiration doesn’t resemble romance at all, and instead, it just feels like respect. Given her tomboy looks (and the fact that a random girl confessed to her), I expected more from Majime, but by the end of the season, you almost forget that she admires Robo.

Lastly, there’s Waseda, the male teacher who makes sure the girls know that he’s only interested in college girls. He sounds incredibly shady, but he may be the most “normal” character in the show, and he has the unenviable task of keeping order among all these weirdos. It’s also interesting that he’s part of perhaps the only serious moment all season long.

You always go into comedies optimistic that you’re going to be met with a really great cast of characters, but things don’t always work out that way. Luckily, I think Wasteful Days of High School Girl has an ensemble cast that’s easy to love, and then you go ahead and throw in a yuri character? What’s not to like?!

There isn’t a whole lot to say about the production values. On the surface, this anime doesn’t appear to do anything special in order to stand out, so the visuals aren’t great by any stretch. That said, it’s amusing to see the many weird things that this anime thinks up, so like the next thing I’m going to quickly talk about, the visuals are another aspect of this show that the comedy manages to make a little more enjoyable.

It seems the main focus of the sound/music was to help set up and deliver an extra degree of comedic effect to the jokes and gags, and I think it certainly succeeded in that regard. It’s a rather subtle art that people often overlook, but this anime just nails it, and to me at least, the show seems funnier as a result. For most comedy anime, I don’t seem to notice this very much, but for whatever reason, I did with this show. Also, that’s a nice OP, if I do say so myself~

Wasteful Days of High School Girl is just what I’m looking for in a comedy. It has a great cast of weird characters that make up for the absence of a real story, and better yet, there’s a bit of yuri as well. I would’ve liked to have seen more yuri from this, but I can’t complain too much, because I think this is easily one of the funniest anime that I’ve reviewed so far, and I’m really hoping that we’ll eventually get a second season out of this.

+ Really funny
+ Very entertaining characters
+ So stupid, but in a good way