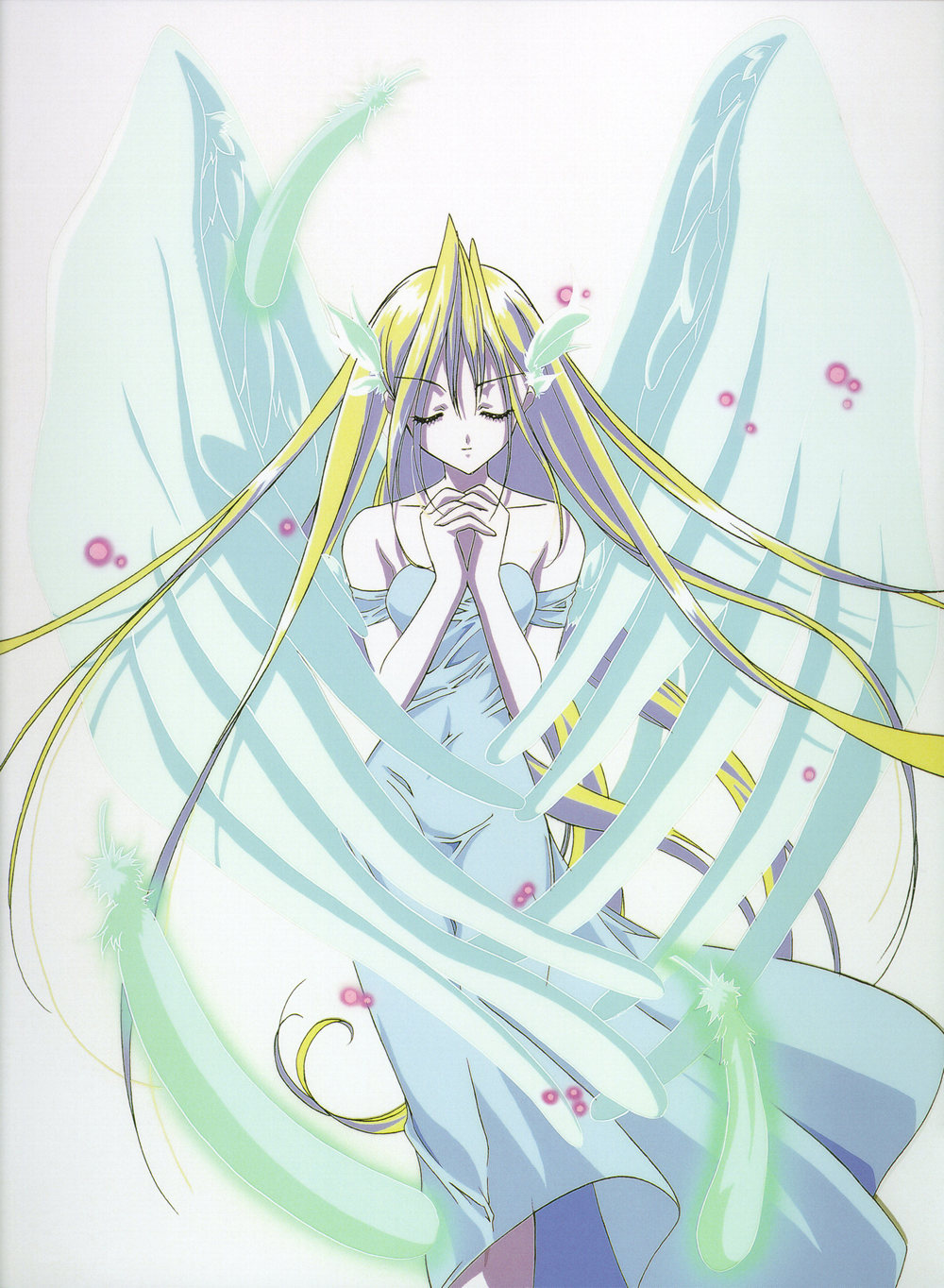 Synopsis: Eleven young hearts with eleven dreams. Deep in their hearts, each girl has a secret dream of love and sadness. They meet together at Acropolis Tower to see if their dreams will come true. Imagine what happens when eleven average girls with eleven special talents join together to make the world a better place.

After reading the synopsis, seeing the cover art, and finding this anime listed in various yuri clubs on MyAnimeList, I kind of expected Seraphim Call to be some sort of fantasy/sci-fi/magical girl drama about all these girls that come together to soothe the hearts of others. Well, I was way off. It’s not like that at all. Instead of something with the ethereal tone of Haibane Renmei, I got ten separate stories spanning everything from a female tech genius with a severe phobia of men to a childish girl who’s always talking to her stuffed animals. The stories and characters don’t really intertwine, but one thing they do have in common is that they’re just not that enjoyable.

With almost every episode telling a different story, there’s precious little time to establish any sort of reason for me to care. Some stories, such as episodes three and eleven, are just plain boring, and aside from the two-episode story stuffed in the middle of the season, nothing really stood out to me as being particularly entertaining.

Comedy was nonexistent, any drama in these individual stories felt rather subdued, the pacing throughout these episodes is often very slow, and there are few moments that leave any sort of lasting positive impression. Seraphim Call was an original anime, so it’s not like these are one-shots that were being adapted. Somebody actually thought it would be a good idea to structure an anime this way, and while it might’ve worked had the writing been much better, the end result is a mish-mash of random stories that don’t gel into anything cohesive.

This becomes abundantly clear in the final episode, where some of the girls do finally interact with one another—in a one-on-one scenario—and it just felt very unnatural to me. It felt like these characters with little in common were hastily thrown together, and I think their inane and random conversations reflected that.

More than anything, I thought the stories were boring. At times, a story might try to position itself as being somewhat deep and thought-provoking, but I don’t think they turned out as well as the creators were hoping for. The episodic format didn’t only hurt the storytelling, the characters also fell victim to it.

In the same way it must be hard to tell a compelling story in twenty-something minutes, it’s no easier to flesh out engaging characters in that short time span, so I shouldn’t blame Seraphim Call too much for failing on both accounts.

The main characters of most of these ten stories were pretty forgettable, I thought, and I’m not surprised to see them have such few favorites on MyAnimeList. There’s the previously mentioned tech genius, the stuffed animal whisperer, the selfless daughter, the insecure tomboy, the VR-loving twins, the math prodigy, the rich girl crime fighter, the girl that’s an urban legend, the mangaka, and the one-girl show. Many of them don’t exhibit that much personality, and their stories don’t exactly help endear them to many viewers.

Far and away, the most memorable characters for me were the twins from episodes five and six, Shion and Sayaka. They’re the only characters that get featured in more than one episode, and those two episodes just happened to be a total mindfuck that briefly made this anime pretty interesting.

The episodes involve virtual reality and the girls questioning the validity of their own existence. It can get pretty confusing for even the viewer to determine what’s real and what’s not, and even though such a dilemma might not sound appealing to some people, it was one of the only things involving this anime that I could get invested in. It didn’t hurt that these are the episodes where this anime gets its yuri. Yes, we learn that Shion and Sayaka have feelings for one another, and thanks to a yuri kiss, they leave little doubt that this isn’t just sisterly love we’re talking about. And I haven’t even mentioned that episode six is basically a replay of episode five, but told from Sayaka’s perspective instead of Shion’s. This dynamic is what largely contributed to the confusion, though I thought it was a novel way of telling their story.

Note that only two of the episodes have yuri, and the two girls involved don’t make another appearance until the final episode (and it’s a brief one). So while Shion and Sayaka essentially become canon in their two episode stint, for the majority of this show, there’s no yuri, and the yuri score should be taken with a grain of salt.

After Shion and Sayaka’s mini arc, everything went back to being ho-hum, including each episode’s main character. There’s not much else to say about them. I should mention, however, that there are very few males in this anime, so know that this is almost exclusively a female affair. Anyway, the yuri in episodes five and six was enjoyable, but I just didn’t care a whole lot about the characters in this anime. Perhaps that could’ve changed if they had more than a paltry one episode to work with, but it is what it is.

This anime aired back in 1999, and it shows it age, especially when it comes to the overly pointy chins and odd hairstyles. Aside from the old-school art style, I already mentioned that I thought that this show was pretty boring, and as such, I thought the animation was average at best. Likewise, I feel like the music wasn’t great, yet it seemed more enjoyable to me than most other aspects of this anime. One very nice thing was seeing every episode get their own unique ending. You don’t often see character EDs, and off the top of my head, the only instance I can think of is Akuma no Riddle, so those were very welcome.

In conclusion, I didn’t have very high expectations for Seraphim Call, yet I still ended up being disappointed by it. The synopsis doesn’t match what ultimately aired, so the lackluster individual stories were quite the letdown, as was how they didn’t relate to one another at all. The one benefit of this being that fans only interested in this anime for the yuri can simply watch episodes five and six and get what they came for. Stick around longer and they’ll find an underwhelming anime that feels pieced together like Frankenstein’s monster.