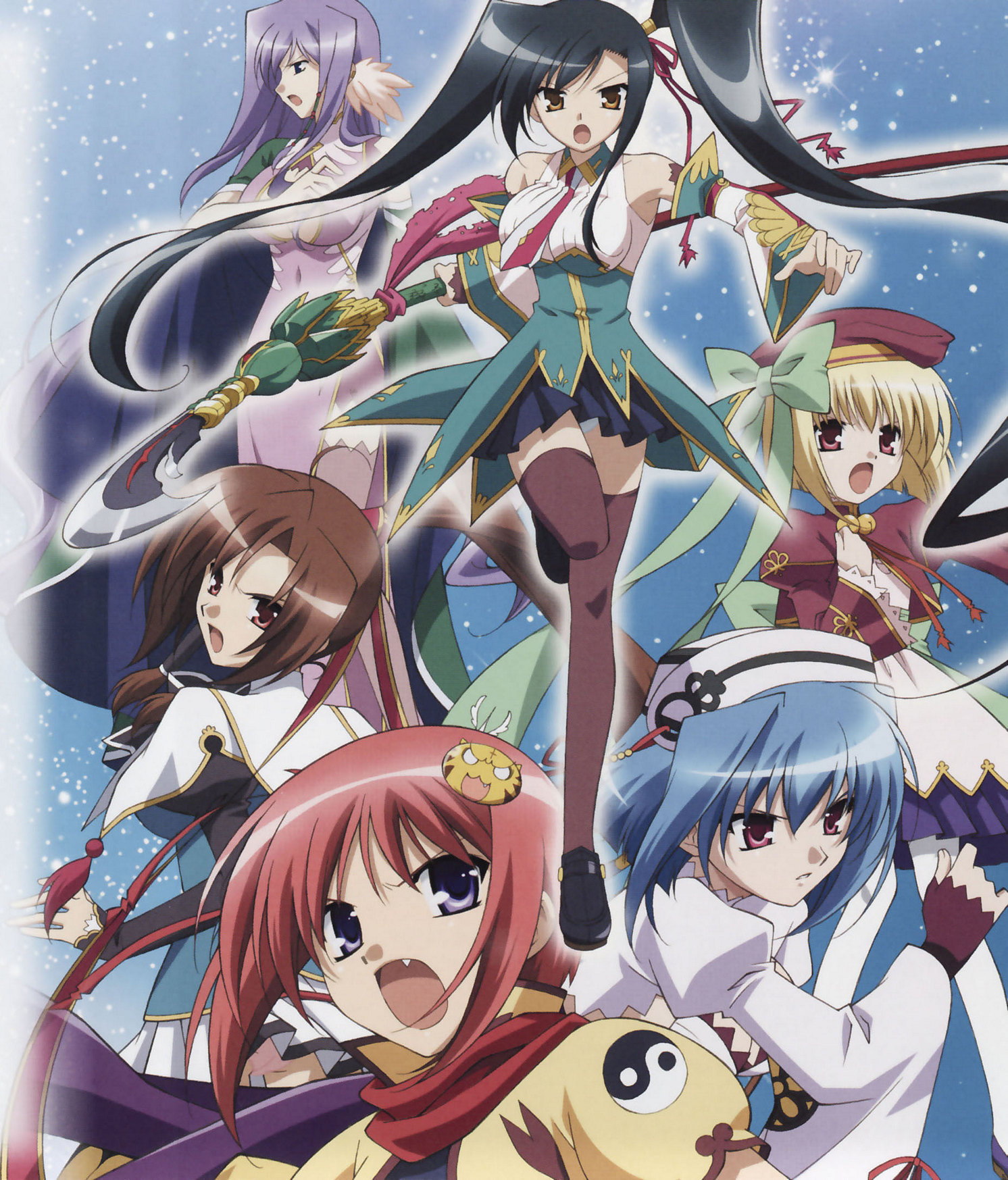 Synopsis: After witnessing the death of her family at the hands of bandits, Unchou Kan’u has devoted her life to protecting the innocent by exterminating any group of bandits she comes across. Over time, Kan’u’s deeds become famous throughout the land—even if she herself remains unknown. During her travels, she runs across a young girl, Chouhi Yokutoku, whose parents suffered a similar fate as Kan’u’s. Finding companionship through their similar pasts, the two girls take a vow of sisterhood and continue to wander the land, determined to bring peace to wherever their journey takes them.

During Kan’u and Chouhi’s journey, they meet and travel with several people who are sympathetic to their cause, such as the noble Chouun Shiryuu, the headstrong Bachou Mouki, and the calculating Shokatsuryou Koumei. From problems with local lords to groups of ravaging bandits, Kan’u and her friends do what they can to make life a little easier for those in need, wherever they may be.

First off, I should mention that this anime is loosely based on an eroge visual novel that I haven’t played. From what I’ve read, it seems that many things were changed in this adaptation, but I’ll just judge it for the anime it is and not for the visual novel that it isn’t.

When I first heard of Koihime†Musou, I was reminded of a couple of other anime that I reviewed not that long ago, Ikkitousen and Sengoku Otome, but I’m not sure that Koihime†Musou was as entertaining to me as either of those anime.

I think that’s partly due to the story, which is pretty bare-bones and uninspired. The story sees Kan’u traveling the land and serving justice to any bandits she comes across, and there isn’t much more to the story than that. Along the way, Kan’u meets a few other girls that decide to join her on her travels, but the story just didn’t feel like it was leading up to anything significant. Even the climax of the season felt disappointing, and I was left wondering if that was really it. The lack of a main antagonist certainly didn’t help, and no amount of lords and royalty were enough to adequately fill the void.

So the story development was almost nonexistent, but at least I thought this anime had some decent comedic moments. You’re unlikely to confuse it for a real comedy, yet I liked the lighthearted tone and didn’t mind the lack of serious melodrama. Over the course of the season, the story definitely struggled to hold my interest, however, I don’t think I’d go as far as to call the story bad. Mediocre? Sure, it’s just that Koihime†Musou plays it really safe, and even if you were to mentally check out halfway through any given episode, you probably wouldn’t be missing anything too significant. Uneventful is a way to describe the story of this show, so I wouldn’t be too surprised if some people find it kind of boring.

Moving on to the characters, even though there are quite a lot of supporting characters, I found almost all of them to be overly forgettable. Like Ikkitousen, this anime draws inspiration from the feudal lords of China, but having characters of the same name only made the Koihime†Musou versions pale even more when compared to their Ikkitousen counterpart. It’s like that across the board.

Kan’u is the main character, and as the main hero of the story, I think she was among the most likable characters. That said, I thought Kan’u lacked any real stand out qualities, and I expected more charisma from the lead. It doesn’t help that Ikkitousen‘s Kan’u just oozes charisma, so whenever I saw this Kan’u, I couldn’t help but think how much more I’d enjoy this if it starred that other Kan’u.

Charisma is something that Rin Rin was lacking, and because of that, she was probably my favorite character in this anime. She basically becomes Kan’u’s adopted little sister, but she’s just a feisty little troublemaker that makes things more entertaining. Bacho and Shiryuu were another couple of characters that I enjoyed (and not just because Shiryuu may have had her way with Bacho while she was sleeping), but the revolving door of supporting characters didn’t do this anime any favors.

Instead of focusing on some of the more entertaining characters like Sousou and Reiha, we get introduced to many other girls that barely leave any sort of lasting impression. A bigger cast doesn’t always translate to a better cast, and I would’ve preferred if this anime didn’t feel the need to introduce every girl and then not give them much of reason to be there.

But the main reason that this anime is getting reviewed is because of the previously mentioned Sousou, who along with her subordinates, just seem to be as gay as can be. In addition to her underlings, Sousou also makes no secret of her desire to get Kan’u into bed (and she almost does it). I’d say that forcing your subordinate to lick the sweat off of you is enough to get yuri fans’ attention, but Sousou still never fails to come across as anything less than a capable leader, and I liked that she wasn’t just a joke of a character. Like some of the other characters, she wasn’t involved as much as I would’ve liked, and that keeps this anime from getting a higher yuri score.

Out of all the aspects of this anime, I feel like the characters were the best thing Koihime†Musou had going for it, I just didn’t like that despite so many characters being introduced, only a few stuck around long enough to really add something worthwhile to this anime. There are two more seasons of Koihime†Musou that aired after this, so maybe those underdeveloped characters will finally get their chance to shine. I’m probably going to end up reviewing those seasons as well, so we shall see.

When it comes to the animation and sound, I don’t think Koihime†Musou fares that much better. The fighting is rather lackluster, and since action is among the genres listed, it simply didn’t impress me whatsoever. Given that this anime is from Doga Kobo, I probably shouldn’t be surprised by that, yet I expected the action to be better than what it was. From time to time, the show transitioned to a chibi style that gave it some much needed personality, and this I liked. The cuteness levels aren’t too high, and the same can be said of the fanservice. Sure, there are some busty girls, onsen scenes, and the occasional panty shot, but it’s all pretty tame compared to current anime standards.

As for the music, it was totally forgettable. The overall tone of the anime was light and playful, and I think the music reflected that. Not even the battle scenes were enough to help make the music stand out, so this was another example of the production values of this anime being pretty mediocre.

Overall, I think Koihime†Musou turned out to be the very definition of mediocre. It’s not bad, but it’s not good either, and if I didn’t feel obligated to review it, this is another anime that I probably would’ve dropped. The bland story and average characters helped to make this a mildly entertaining show that I’ll probably forget about pretty soon, but not before I can review the second and third seasons, so that’s something for you all to not look forward to. 😛