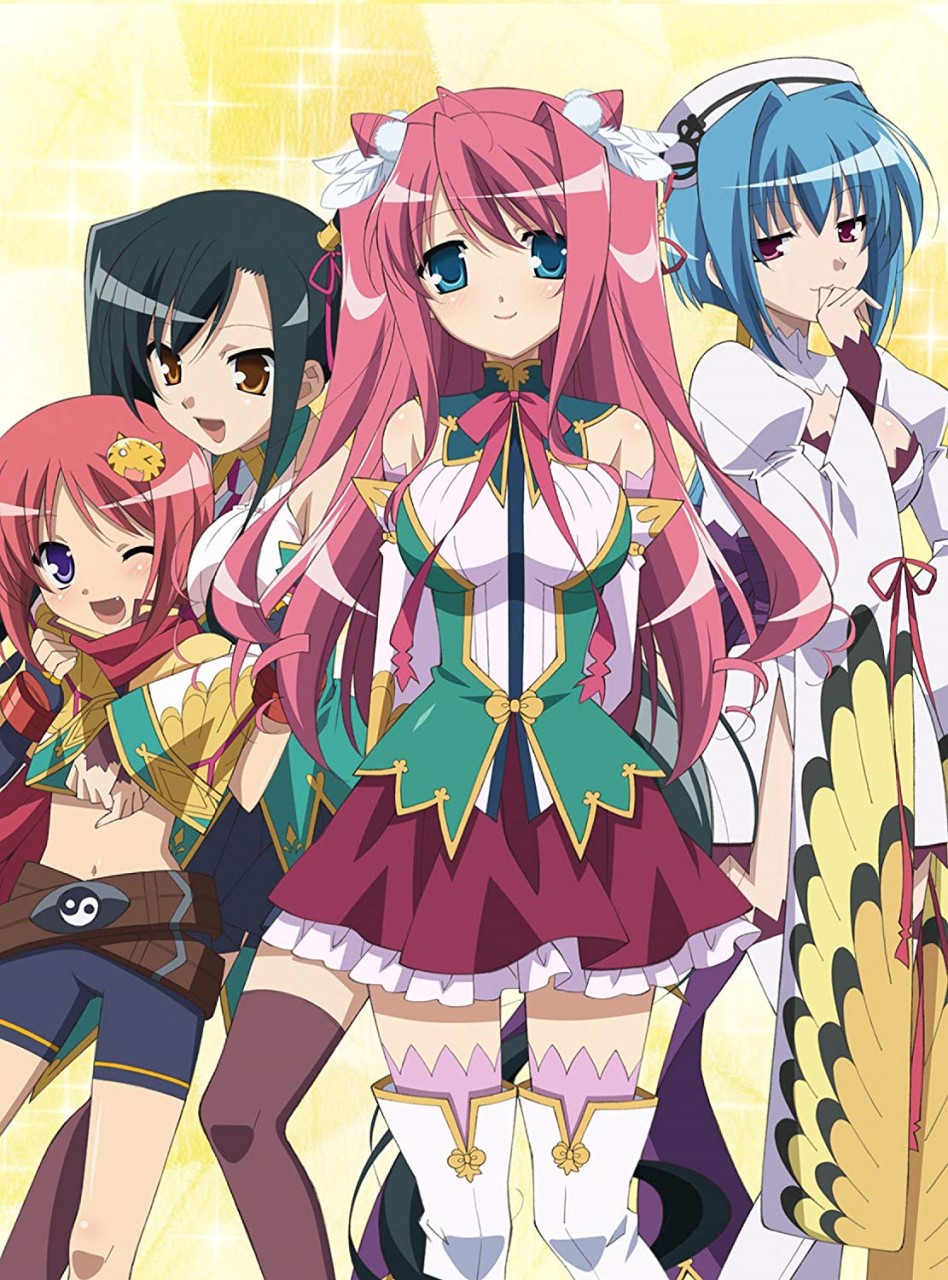 Synopsis: Kanuu and Chouhi’s group rescue a mysterious girl, who is actually the real Ryuubi, her name and heirloom sword stolen after the events of the last season. The group sets off to recover Ryuubi’s sword. At the same time, a group of street performers, the three Chou Sisters, are given a mysterious magic book that may be more trouble than they think….The franchise re-imagines the classic Chinese historical novel Romance of the Three Kingdoms (Sangokushi) as a “moe (fiery), moe (preciously cute) action love comedy” with an almost all-female cast.

Last time on YuriReviews, I was very impressed at how Koihime†Musou managed to be so incredibly average, but now it’s time for the second season to show us what it’s got. Can Shin Koihime†Musou build upon the foundation set by the original and get over the proverbial hump? In short, not really.

Season one of Koihime†Musou was rather light on story, and nothing has changed in the second season. The girls are still traveling around and doing random things, but this season eventually sees one main storyline emerge, so that’s more than the first season can say. It involves a magical book that a trio of sisters are given, but instead of being used for a great evil, they use it to further their musical ambitions. The situation essentially culminated in a “to be continued” fashion, which depressed me and reminded me that there is a third season as well.

Like the first season, Shin Koihime†Musou mostly steers away from any serious drama, so the playful and goofy attitude of the original returns in full force. That said, I wasn’t impressed by the comedy of this season either, and for an anime such as this, I just wanted something funnier. The number of battles has decreased, but since the fights weren’t that great to begin with, I don’t think it was a major loss. The interactions between the characters continue to be the biggest source of enjoyment this season, but there are even more girls this time around.

I feel like some improvements were made to this story this season, but not enough to get me to thoroughly enjoy it, and more than anything else, this season hammered home the feeling that this series is nothing more than a decent time waster.

As mentioned above, the already large cast grew even more over the course of the season, so while some of the very minor characters from season one don’t return, established favorites like Rin Rin don’t play as big a part as they did in the first season. This furthers the problem that was already present in season one, and although a few of the new additions have some personality, I’d still have much rather have seen the established characters play more meaningful roles. For example, Shiryuu was one of my favorites in the first season, yet she’s mostly invisible this time around, so Butterfly Mask only makes like two small appearances.

Ryuubi was the new addition to the main cast, but I don’t think she was all that entertaining. Characters like Rin Rin and Shiryuu have the personalities to stand out, but Ryuubi just didn’t, and despite a big portion of the story revolving around her, I felt like Ryuubi was too often overshadowed by the other girls.

Kan’u was still a steady but unspectacular leader, Rin Rin had a few moments but wasn’t as entertaining as before, Bachou is just straight up gone for a lot of the season, and I already mentioned how Shiryuu doesn’t have much to do other than spout dirty one-liners. But I think one positive thing that emerged was seeing Koumei really settle in as an important member of the group. Compared to the first season, I liked her a lot more this season, and it became apparent that even though she might not look the part, she’s actually quite dirty-minded. Who would have thunk it?

Speaking of being dirty-minded, the main yuri character in season one was Sousou, who had seemingly built up her own little group of lesbian subordinates. She returns, but I’m sad to say that she doesn’t display the same level of gayness as season one, so as a whole, the yuri is down from the first season. When we met a new yuri character who almost bled out after fantasizing about Sousou, things were looking promising, but nothing comes of it, even though she is hired by Sousou.

If, like me, you were watching just for some yuri, you’re going to be disappointed, and even more so than in season one. As a whole, it felt like Shin Koihime†Musou took two steps back for every one step forward, so while there were some improvements involving the characters, seeing some of the more entertaining girls play less important roles wasn’t fun. And hearing more about Sousou’s constipation than her desire of girls was a major letdown. Let’s hope that changes in season three.

When it comes to the production values, this season is just as ordinary as the first. Less fighting means fewer opportunities for the animation to stand out, but this season throws a surprise at us in the form of singing. The sisters that use the magical book to garner adoring fans have this season sometimes feeling like Love Live!, and I thought it was a breath of fresh air. I’ve already forgotten about the songs themselves, but for a minute there, I was entertained. 😛

And in case you’re wondering, this season is still ecchi (arguably more than season one) and there are still the cute chibi scenes that add a layer of adorableness to it all. So other than the singing, not that much has changed, for better or worse.

Overall, I wasn’t any more entertained by Shin Koihime†Musou than I was with the first season. Although I enjoyed the story a little more, I’ve accepted that this isn’t the show’s strong suit, but the underwhelming comedy still hurts this series in my book, and stripping away most of the yuri was just a really ill-advised decision.

For season three, I want to see more involvement from the original main cast, better comedy, and the return of lesbian Sousou. Go ahead, break my heart again, Koihime†Musou…