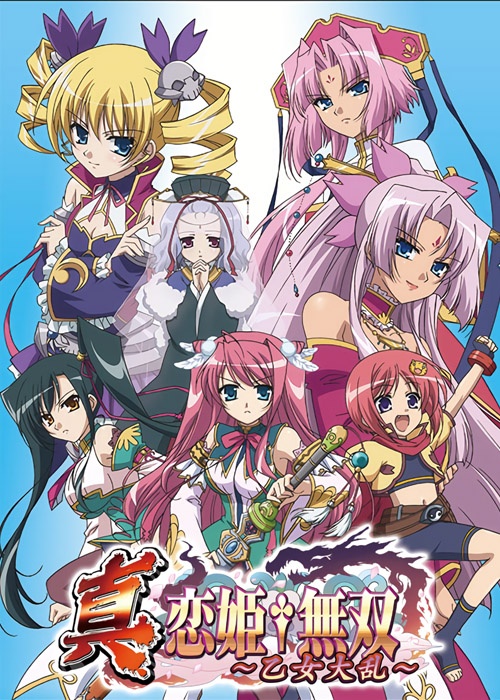 Synopsis: Kashin is afflicted with a disease that will turn her into a cat if an antidote is not found, and Kada is still seeking the Crucial Ways to the Key of Peace, so he entrusts Kan’u’s group to go seek the ingredients for an antidote. At the same time, Chōjō is plotting something between the Kingdoms, and Kashin may have been only the first in a line of dominoes set to fall.

At long last, we’ve come to the final season of Koihime†Musou, so let’s not waste any time and get this over with already.

Compared to previous seasons, Shin Koihime†Musou: Otome Tairan features much more conflict in the story, and as a result, I think I enjoyed the story more than the first two seasons. That doesn’t mean there aren’t plenty of random story threads similar to what populated the first two seasons. Those still exist, but I’m glad there’s at least an attempt at piecing together a somewhat coherent plot.

As mentioned in that short synopsis, one of the main storylines this season consists of the main cast of girls we’ve come to know traveling far and wide to obtain the ingredients needed to prevent General Kashin from transforming into a cat, and it’s absolutely as ridiculous as it sounds. This is where this season gets its heaping helping of random diversions from, and for whatever reason, I found it all to be slightly more entertaining than in past seasons.

The Crucial Ways remain a critical storyline, but one that’s pushed aside for nearly the entire season. Predictably, the threat brought about by the book eventually brings all the various lords and factions together as one, and regardless of medium, I don’t think I’ll ever get tired of seeing that sort of thing happen.

The first two seasons of Koihime†Musou were all too content to just skimp on the story in favor of weird antics, yet Otome Tairan managed to keep the weirdness while also attempting to tell a more interesting story, so for me, this was where the third season improved the most.

Honestly, there are so many characters in this series that I eventually just forgot the names of many of the girls and started losing track of which one is which. Whenever new or lesser-known characters would be introduced or featured, it was hard for me to care about about them as I would for the now-familiar main cast, so the too many characters problem never ended up getting resolved.

On their quest to stop Kashin’s transformation, the main cast gets split into three groups and sent to retrieve the ingredients, but as disappointing as it sounds to not have them all together, I feel like it was handled surprisingly well. The only exception was Kan’u, who goes out on her own and doesn’t have many, if any, memorable moments this season. I would’ve liked to have seen Bachou and Shiryuu (who are paired together on their quest) do something more important, yet they weren’t as forgotten about as I feared they’d be. Also, I’m glad that Rin Rin is still as great as ever.

When it comes to the yuri, Otome Tairan was undoubtedly a step up from Shin Koihime†Musou, yet many of the yuri characters from before just don’t have those moments this season. Most notably, Sousou doesn’t seduce any of her underlings but omissions like these are made easier by someone like Gien, a new character who immediately falls in love with Ryuubi and tags along with the main cast. Later on, Hakufu and her main strategist end their brief feud by getting drunk and having sex, so while Gien can’t compare to Sousou as a yuri character, this season still has a few things for yuri fans to enjoy. And did I mention the cat girls who love big boobs?

Introducing even more characters seemed like a questionable move, but it didn’t turn out as bad as I thought it would, and after letting yuri fans down in season two, this season rebounded well enough in that regard, so kudos to this season for not regressing any further.

Moving on to the animation and sound, you could just copy and paste most of what I’ve said about the music in prior seasons. It’s only very slightly less forgettable than the mediocre music from before, and for the most part, you could say the same about the animation. This season is still ecchi and still has the cute chibi moments, but there’s probably more fighting than before, and although Doga Kobo will never compete with the likes of Trigger, they tried and therefore shouldn’t be criticized too heavily. Strangely enough, that ED was kinda nice. Must’ve been the cute dancing. Long story short, not much has changed here, and that’s not surprising at all.

Overall, I feel like Shin Koihime†Musou: Otome Tairan ended up being a minor improvement over past seasons, mostly due to the more entertaining story and the decision to not forget about the yuri, like in season two. This may not have been the most enjoyable series that I’ve reviewed, far from it, but it had its share of positive moments, and I didn’t expect much more from this, so I guess I can say that my modest expectations were met.

– So many characters
– Still doesn’t excel at any one thing
– Lesbian Sousou still M.I.A.