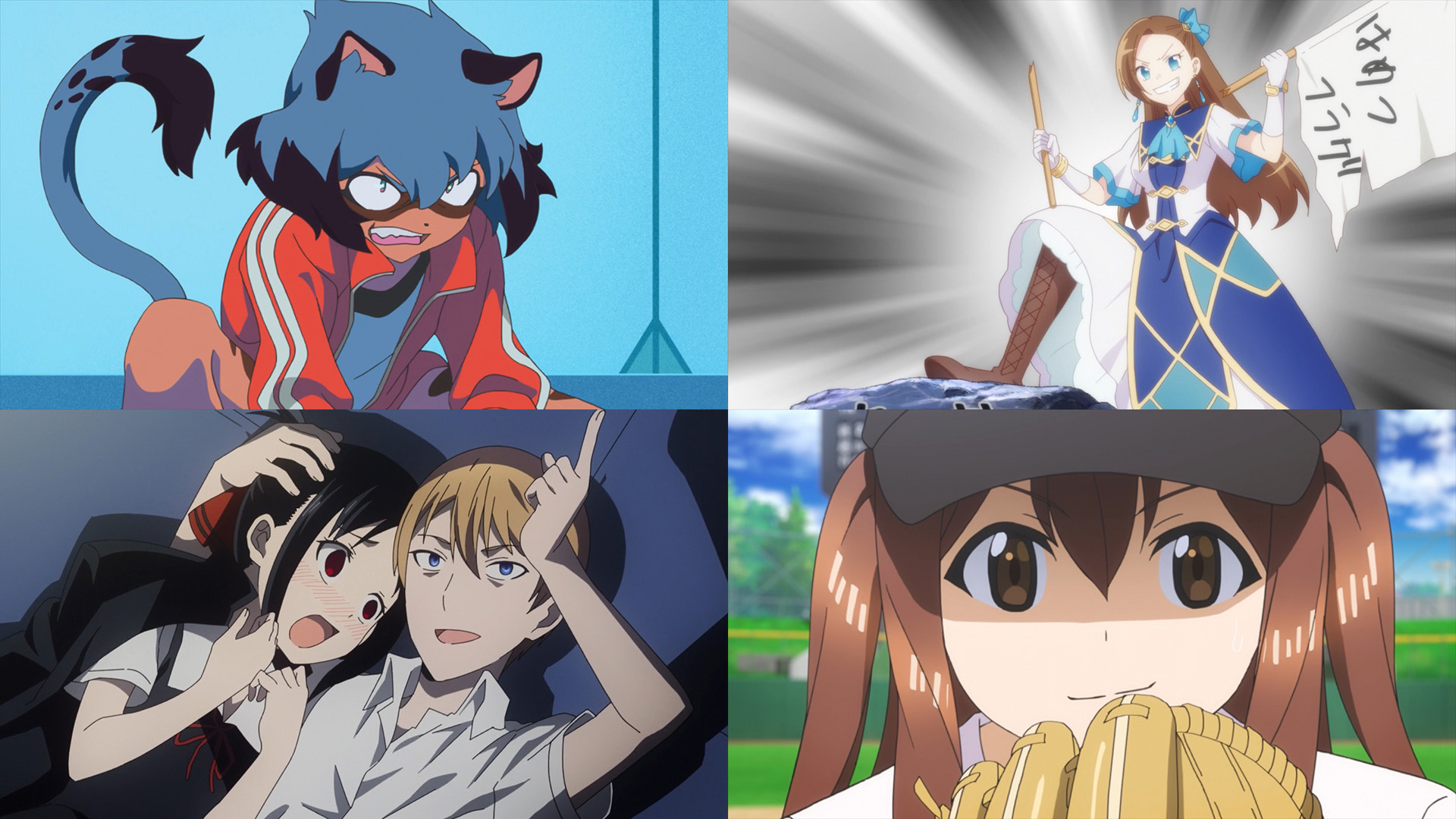 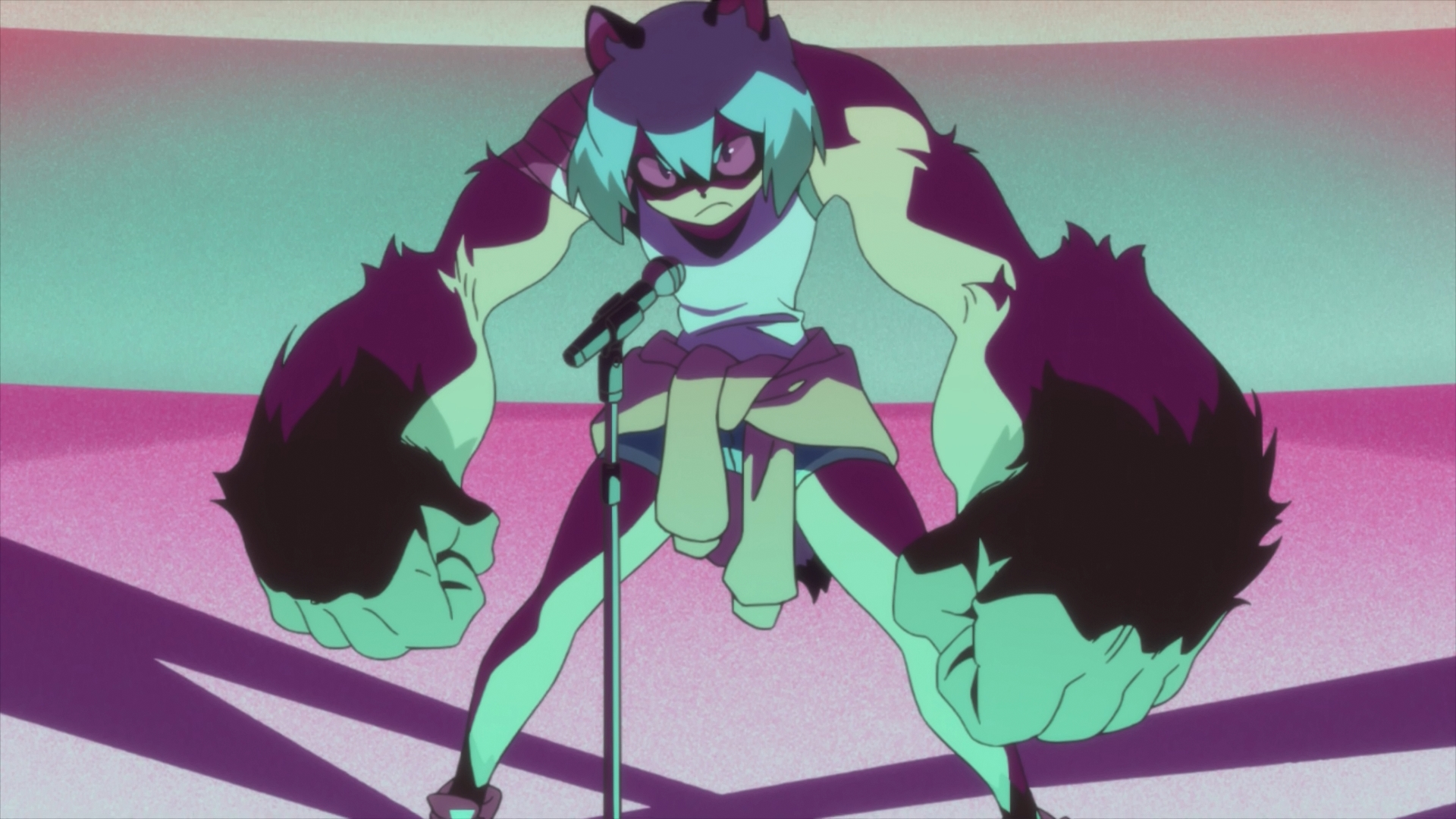 The story, revolving around the criminal goings on in a city where beastmen can live freely, was familiar enough to fans of crime drama, yet the beastmen x human angle was enough of a twist to keep it all interesting to me. The story didn’t go anywhere near as far as it could have regarding the discrimination faced by the beastmen, though it’s probably best for an anime not to trivialize the harsh reality of social injustice, so I’m okay with the decision. Instead, there was more of a focus on organized crime and other shady activities, and then there was the goofiness we’ve come to expect from Trigger, which helped things from becoming too heavy. Thanks to most of the characters’ ability to transform between a human-looking form and beast form, a lot of the characters had a lot of personality, so that was another plus. I wouldn’t rank this anime up with Kill la Kill or Little Witch Academia, yet I think this ended up being another winner from Trigger. 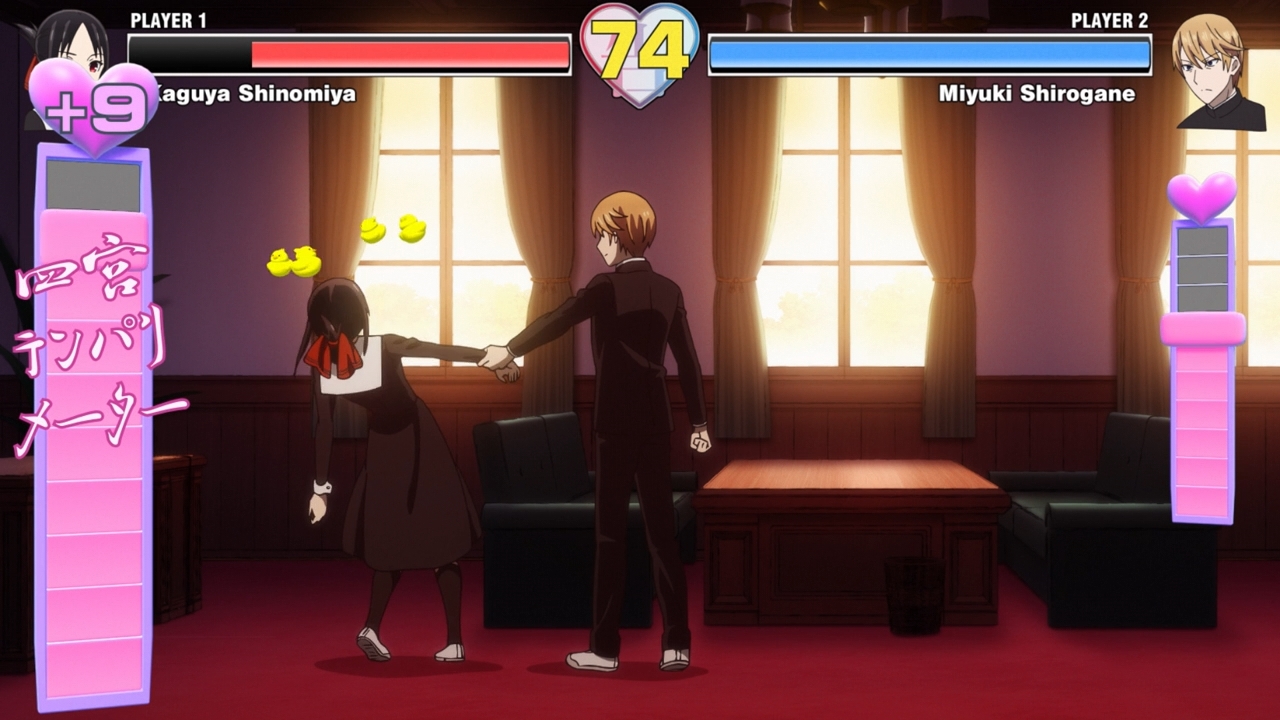 The first season of Kaguya-sama: Love is War premiered a year and a half ago, and it winded up being one of my favorite anime romcoms ever. It had a super fun premise that felt fresh, great characters, and comedy that was consistently funny. Fast-forward to this season, and because of how all those points were repeated, I’m once again reminded why I love this series.

Ishigami had largely been nothing more than a running gag for the entire series, so I think him being given some actual character development had to be the most surprising thing this season had to offer. He starred in the best episode, and it was mostly absent of comedy, so it was a pleasant surprise to see this series show some genuine heart. But that’s not to say the ongoing war between Kaguya and Shirogane didn’t once again deliver big laughs. The mix of comedy and awkward romance was still handled brilliantly, and even though neither one confessed, I hope that means we’ll eventually get a third season.

The two new additions to the cast fit in really well, and the best girl, Chika, was as great as ever. It’s easy to lump all romcoms together, but this series has demonstrated itself to be a cut above the others. Through two seasons now, it’s maintained its originality in a genre usually devoid of any, so it’s no wonder why so many people have come to love this series. 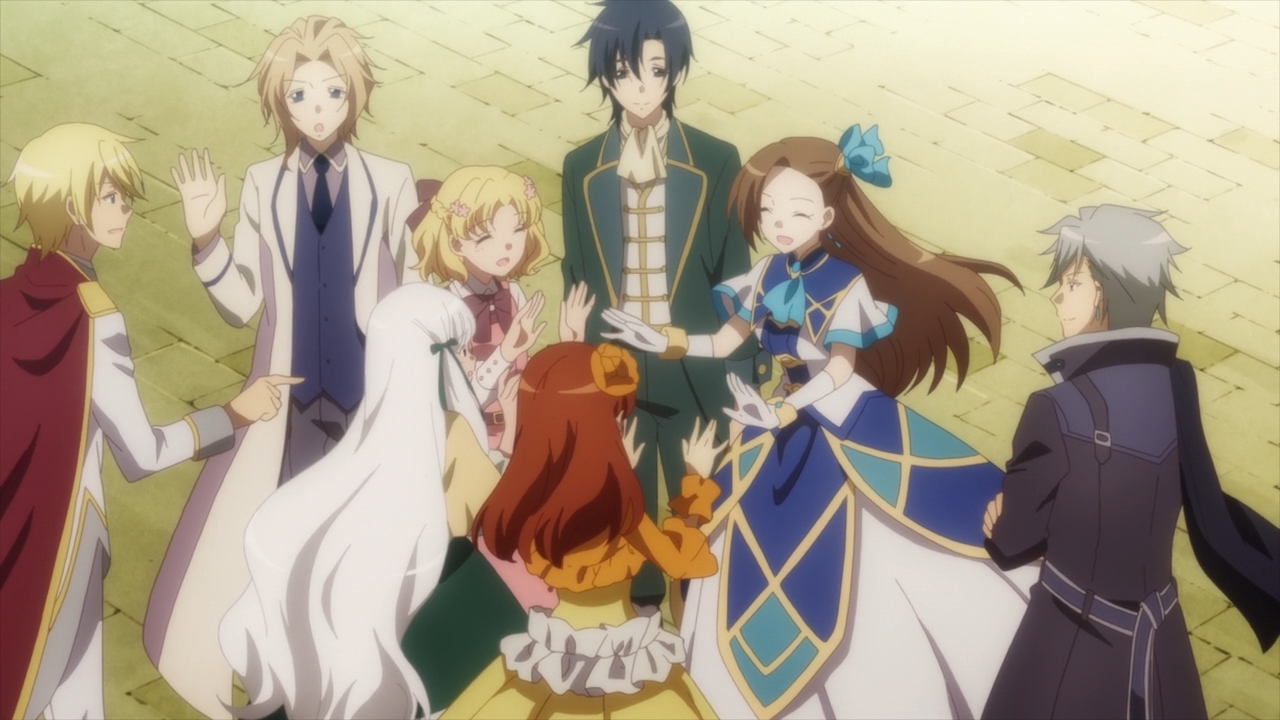 First off, am I the only one that hates the idea of an 8 year-old being set to marry someone, even if it’s with someone their own age? Also, 99.99% of 8 year-olds are incredibly immature, so I don’t like seeing them presented as rational human beings capable of deep thought. Okay, my “you kids get off my lawn!” rant is over. 😀

By all accounts, this was another mediocre season with not that many reasons to watch anything, but one anime worth watching was Hamefura. Thanks to Cat’s ability to have everyone love her, we got some yuri courtesy of Mary, who’s probably the only girl to have romantic feelings for Cat, despite Maria and Sophia obviously caring deeply for Cat. I honestly expected more yuri, as Mary was not always as gung ho as I would’ve liked. Still, this was easily the yuriest anime of the season, though, because all of the guys have romantic feelings for Cat, that’s something yuri fans will have to deal with.

Regardless if you prefer yuri or het, this was an entertaining show that I’m happy is getting a second season. The otome game backdrop added a fun and charming layer to this show, and speaking of charming, this was a cast that I enjoyed a lot. I liked how each of them were given a brief backstory info dump, which gave me more reason to care about them, while not taking up too much time and disturbing the flow of the narrative. Cat was a really entertaining protagonist, equal parts funny and charismatic, so this anime definitely had some things going for it. We’ll probably review this anime at some point, so expect to read more about this show in the coming weeks. 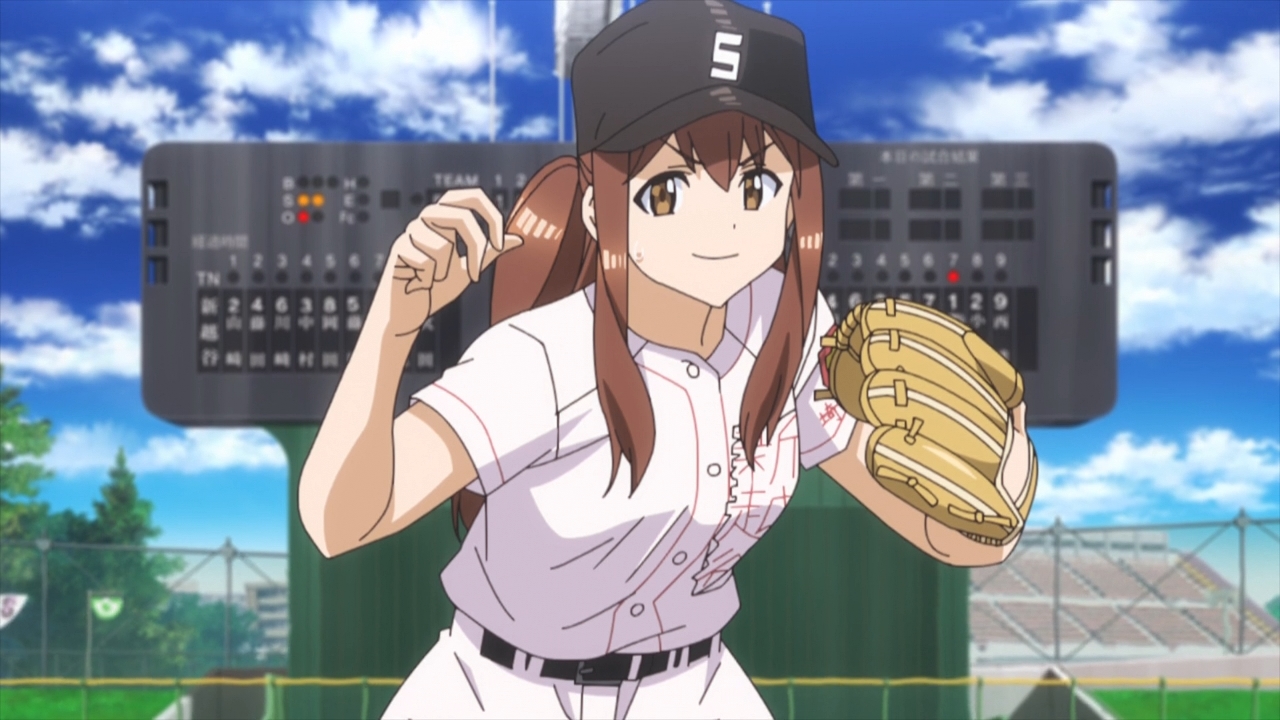 Looking back, hopes were high that Tamayomi could be an anime worth watching for yuri fans. But things just didn’t work out that way. Not only was it not worth watching for yuri fans, I don’t think it was really worth watching for anyone, maybe not even baseball fans. Did the world need another incredibly generic sports anime? Don’t we already have enough of those? There isn’t anything here that hasn’t been done before, and done so much better, so I have to wonder why this anime even exists in the first place. There is a character that gets a little touchy feely with the other players, but that’s nowhere near enough to keep me entertained.

To me, the characters in Tamayomi are bland and not very interesting at all. I simply had little reason to care about any of them, and the story did nothing to help with that. This is basically your typical “school club gets formed and the girls aim for Nationals” story, so it’s completely unoriginal and lacking any real substance. It’s totally by-the-book and cliché, and given my dislike for baseball, I would’ve normally dropped this within two or three episodes. It certainly didn’t help that this anime doesn’t look good, and that’s being kind. CG was used for a lot of the baseball scenes, but that didn’t help matters, so it looked more awkward than anything. Like baseball itself, I thought this was really boring and not very entertaining, and judging by the MAL scores, it seems I’m not alone in thinking that.

BNA had a baseball episode that was a lot more entertaining than anything this show had to offer, so I’d rather rewatch that twelve times than rewatch this series. 😛