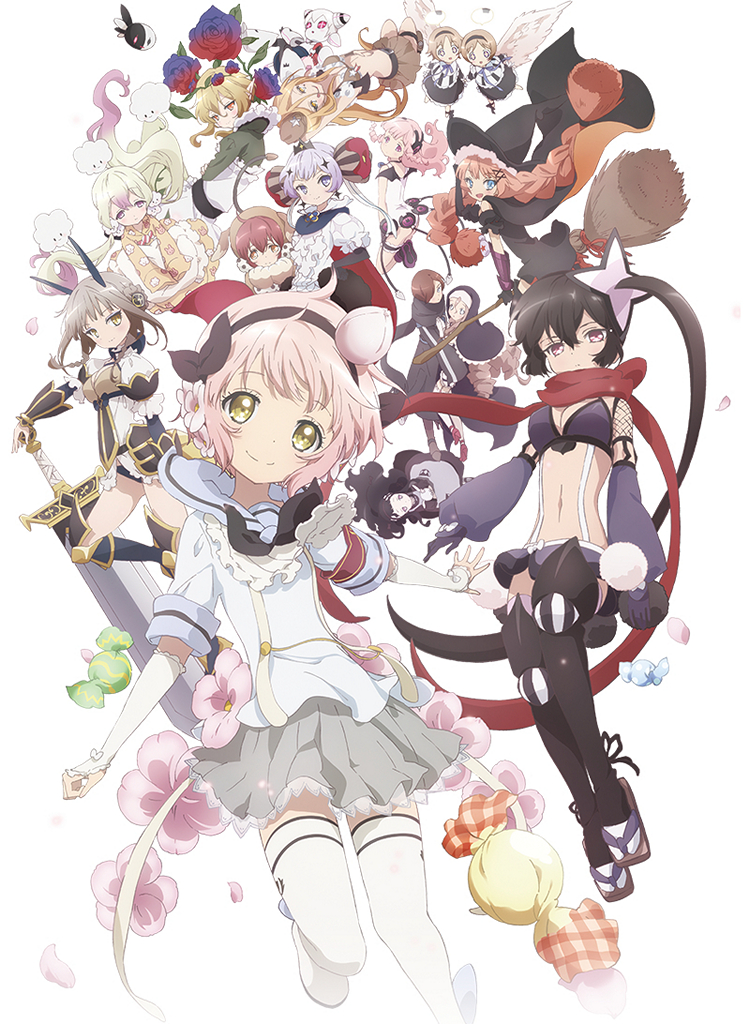 Synopsis: For many individuals in N-City, playing the popular social role-playing game Magical Girl Raising Project is as close as they could come to being a real magical girl. However, for some rare players, that dream can become a reality. One such girl is Koyuki Himekawa, who receives a notification one night that she has been selected to become a magical girl, her in-game avatar Snow White.

As Koyuki and other chosen players in the city begin helping those in need, they all receive yet another notification: the admins have decided that they want to reduce the number of magical girls. Whoever collects the least amount of Magical Candies—which are awarded for their magical girl activities—in their competition each week will lose their powers. But when a real-world tragedy happens to the first player that drops out, they are shown the repercussions of losing their abilities. As more participants inevitably lose the competition and more twisted rules are added, the girls soon realize that their “contest” is actually a desperate fight for survival.

I’ll try not to get into spoilers here, but the story played out in relatively familiar fashion, with the biggest surprises coming from trying to figure out who was going to die next. Yes, there are a lot of deaths in this anime, so it most certainly lives up to what we’ve come to expect from dark magical girl anime. The funny thing is, I thought the first half of the show was pretty tame by dark magical girl standards, and I was liking that this anime wasn’t trying too hard to be dark and edgy, unlike anime such as Mahou Shoujo Site. Business really picked up midway through the season, and any doubts I had that this would be dark and grim were quickly washed away in a pool of magical girl blood. Extremeties will be severed and people will die grisly deaths, so those of you looking for a lot of that in your dark magical girl anime should be pleased by this show.

Once the fighting amongst the magical girls begins, it doesn’t stop, so even though all the backstabbing and murdering felt familiar, I felt like it all played out pretty well. Like essentially every other dark magical girl anime, this can’t hold a candle to Madoka★Magica from a narrative standpoint, and this anime doesn’t even try to present us with an overly complex plot. The story revolved around a mobile game that turned a few of its players into magical girls, and if you think that sounds uninspired, you’re not alone. A lot of fighting ensues, and when we learn the reason behind all of this, I was left wondering if that was it, because it’s pretty barebones and not delved into very much. The pile of bodies notwithstanding, the story leaves room for a second season, but I would’ve liked to have seen a lot more nuance here.

At least we got a little backstory for each of the magical girls, and while there are certainly some that had a lot of personal baggage, not all felt the cold grip of despair. So what we had here was a story that played it pretty safe and only introduced a few aspects of the story that felt unique, yet I think the sheer amount of conflict helped to mask some of Magical Girl Raising Project‘s story problems for me.

As straightforward as the story was, I thought the characters were the driving force that made me become invested in this show, and here is where the show exercised a little originality. Once everyone had begun, there were sixteen magical girls, and despite that being a pretty high number, I was kind of impressed that almost all of these girls had quite a bit of charisma. I was also impressed that, compared to other magical girl anime, these characters were pretty diverse.

You can’t mention diversity and this show and not talk about La Pucelle, who seems like your standard knight-like magical girl that helps protect the show’s protagonist, but the big twist here is that, in normal life, La Pucelle is actually a boy named Souta. After transforming, he’s 100% female, but the idea of a boy that can turn into a magical girl is really nice and different. Sou alternates between regular boy and magical girl, so he’s not permanently female, yet most of the scenes portray him as La Pucelle, and I thought he was a really enjoyable character.

The other examples of diversity amongst the magical girls come from Ruler and Calamity Mary, both of whom aren’t girls but women. I’m so used to seeing middle schoolers as the ones becoming magical girls, so seeing a working adult and a parent among them was really refreshing. As villains, both Ruler and Calamity Mary turn in nice performances that’ll probably lead you to root against them, but even though she’s an evil and crazy gunslinger, Calamity Mary was pretty awesome, so she was definitely one of my favorite characters (Hardgore Alice is my #1)~

In some of these anime, the protagonist doesn’t end up being that interesting a character, and I think that applies to this show’s main character, Koyuki/Snow White. She’s one of those overly cute and overly naive protagonists that end up being borderline annoying sometimes, but for being the main character, she isn’t the center of attention as often as you might think, so I didn’t really mind her that much. Compared to some of the other girls, I thought she was lacking charisma, but I’ve seen a lot worse.

I mentioned there were sixteen magical girls, so I shouldn’t go over them one by one, but I should mention that a big part of why I liked these characters was their personalities, and an extension of their personalities were their outfits and abilities. In nearly every other magical girl anime, the girls wear frilly dresses and use standard magic spells as weapons, but here we have a ninja who always lands her shurikens, a nun who can enhance the strength of her beloved, a robot who can receives a random device from the future each day, a goth loli who can regenerate, a witch who can ride her broom at super speeds, a swimmer who can transform anything into water, a dog girl who can dig holes anywhere, a lazy girl who can enter anyone’s dreams, the stoic girl who can create walls anywhere, and a musician of the forest who can manipulate sound. Oh, I almost forgot the twin angels, one of which can transform into any living creature, and the other can transform into any non-living thing. There’s also a Kyuubey wannabe, but who cares?

I loved that the girls weren’t as same-y as what we’ve come to expect from shows like this, where everyone is same-same, but different… but still same. Onto the yuri! 😛

I suppose you could also ship Snow White and La Pucelle, but given Sou/La Pucelle’s gender situation, some might not want to do that.

Sixteen magical girls was probably a few too many, yet I was impressed at how likable a lot of these girls turned out to be. The story was disappointing, but for me, I think the characters were the biggest reason this anime was as entertaining as it was.

Thanks largely to a lot of battles and a lot of violence, I think Lerche did a solid job with the animation of this show. I’ve mentioned the violence a lot, but the first few episodes are kinda bright and cheery, not to mention adorable character designs seen in the chibi chat room. With this much death involved, you wouldn’t expect “cute” to be an adjective I’d use to describe this anime, but I thought the character designs of the magical girls were cuter than you’d find in most other magical girl anime, dark or otherwise. Has there ever been a magical girl cuter than Nemurin? Possibly, but this show was still cute when it wanted to be and brutal when it wanted to be, and throughout it all, it was visually more than adequate.

In terms of music, the things you tend to notice most are of course the battles, but while the music was pretty nice, I wouldn’t go so far as to call it really good. And I have to mention that I loved how the ED came from nano. The OP was nice, but as a nano fan, the ED was a fond farewell to each episode that I usually didn’t skip.

Long story short, Magical Girl Raising Project seemed content to throw at us a simple story of magical girls murdering one another, but it executes this gameplan pretty well, and I admired the fact that this wasn’t trying super hard to be yet another inadequate Madoka★Magica carbon copy. Of course, it draws inspiration from Madoka, but instead of mystery and intrigue, it gave us murder and more murder. The variety of the characters and their distinct personas was a highlight of this anime for me, and it was great that we had a legitimate lesbian couple among the magical girls. No cheap subtext, just two adult characters who were actually in love. Overall, Magical Girl Raising Project was a solid magical girl anime that lacked ambition, but at least it did a good job of giving us the violence and despair that we’ve come expect from a dark magical girl anime.