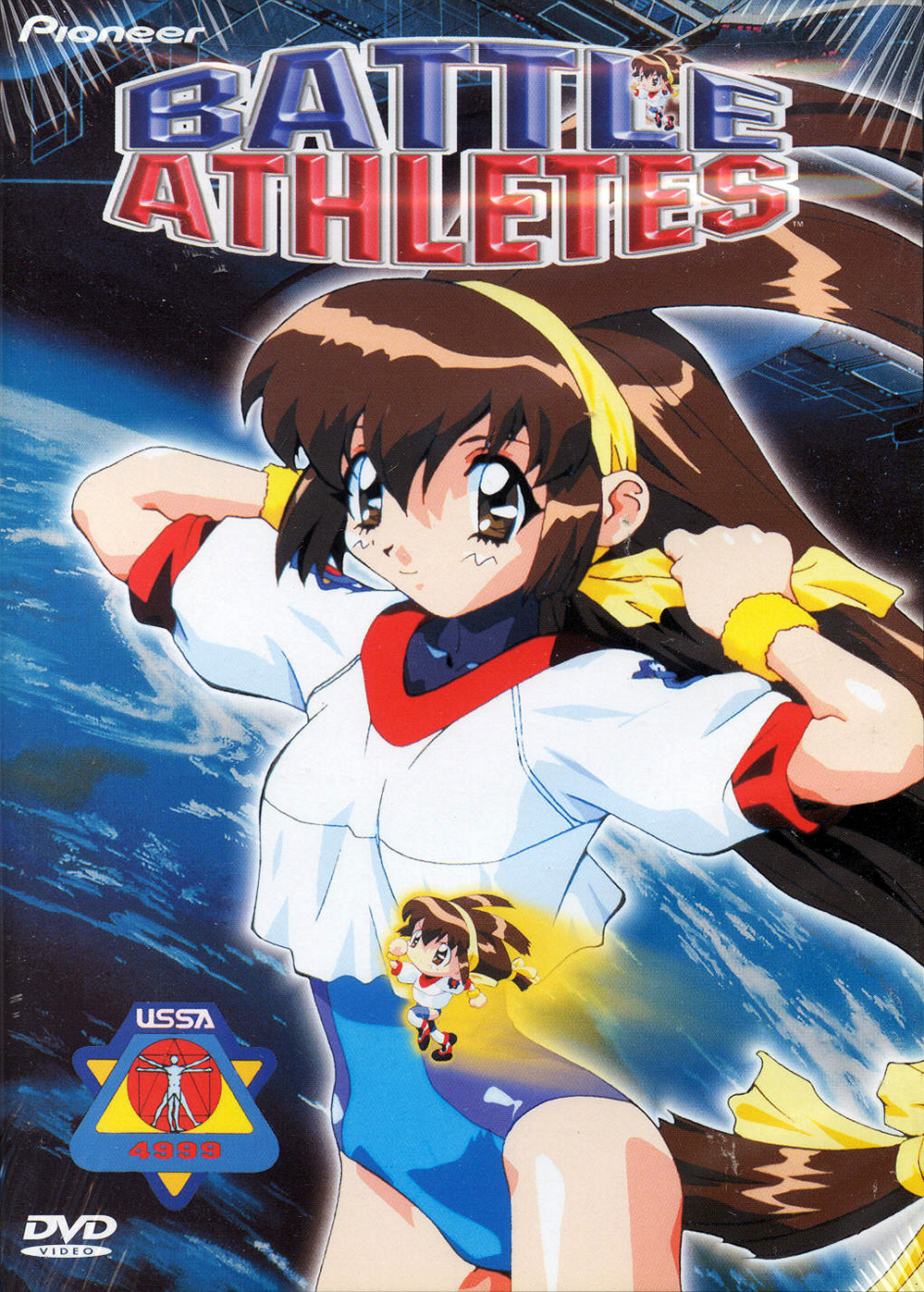 Since it was recently announced that Battle Athletes will be getting a new anime project, I figured it’s about time that I see what this series is all about. In addition to this six-episode OVA, there’s also a twenty-six-episode TV anime that premiered only a few months later, with there being some major differences between the two. But since I haven’t seen the TV anime, let’s get back to this OVA, and considering how things played out, I’m not enthusiastic about watching the TV anime anytime soon.

The Battle Athletes OVA is similar to a lot of other anime (and entertainment in general), where you pretty much know how it’s going to end, before it even begins. But first, with only six episodes, this anime was at a major risk of rushing the story, and while I do feel like the pacing was fast, at least we got a decent primer that gave us a brief recap of the events that led to this competition. The whole “make sport, not war” thing is pretty ridiculous, especially in this day and age. But as ridiculous as it may be, it does lead to some entertaining moments on the field of play, I just wish it didn’t play out in such a predictable manner.

If you’ve seen a sports anime, a sports movie, or basically anything involving competition, you should know how things unfold. After a period of struggle and self-doubt, the underdog digs deep and manages to topple the massive favorites standing in their way. That’s also what happens here, and it just felt so unnatural to me. For 2/3 of the anime, Akari seemed like she had no business being in the presence of an athlete like Lahrri, but since she’s the star, the whole thing gets giftwrapped for her. I understand this is just how these types of situations go, but that doesn’t mean I have to like it. I really didn’t like how the entire competition played out and how Kris and Lahrri were robbed, so I’ll always view Akari as a paper champion. I’m so bitter. 😀

Want to hear my conspiracy theory regarding this show? Just highlight the white space below to see me go all Pepe Silvia on you. 😛

My theory is that the headmaster is actually Akari’s dad, and since he seemed like a perv and was the only male aboard the satellite, it’s not out of the realm of possibility that he preyed on Akari’s mom during her time aboard the University Satellite. After she gave birth to Akari and threatened to reveal the truth, the headmaster killed her in a fit of rage. To atone for his sins, the headmaster devoted his life to ensuring that his only daughter would win the title of Cosmic Beauty. He hired the mentally unstable Mylandah to act as Akari’s tormentor, in order to ensure Akari would find a trusted ally, which turned out to be Kris. So when Mylandah sabotaged the final race, it was under the headmaster’s orders, and he unceremoniously threw her under the bus afterwards, since she was no longer of use to him. He then used his absolute power and sleight of hand to adjust the gravity on Lahrri’s lane, ensuring that Akari would win the race and the title. Grant Oldman? You probably change identities and the name you come up with is Grant Oldman? Dead giveaway. Dead giveaway!

I was hoping for a more serious sports anime, and this wasn’t that. Comedy wasn’t that great, and the drama wasn’t that much better, so my obvious disillusionment aside, this futuristic sports anime wasn’t really any different from those set in the modern day. Even despite the predictable outcome, I might not have had a problem with the story, if I had enjoyed the characters more.

Over the course of the OVA, only six girls are properly introduced, and it’s even less than that, since one of the girls was actually a boy. So that makes a total of five girls, which is far less than I was expecting.

For most of this OVA, the yuri was pretty subtle and involved two pairings, Akari x Kris and Mylandah x Lahrri.

From the very first time they met, Kris was there to protect and guide Akari, so she always had that white knight vibe that we’ve come to expect. That itself didn’t mean anything, since Anna was also protected by Kris. Even after Kris’ naked dancing ritual in the first episode (don’t forget that Anna was also involved), Kris and Akari’s relationship didn’t really seem like more than friendship, and I didn’t think much of it, until the final episode. It wasn’t just the final episode, it was that “kiss” in the final minutes that made it clear that perhaps it was more than friendship, even if that’s what they called it. Then again, Kris didn’t think her naked dancing was strange or sexual, so maybe a “kiss” like that is just customary in her culture. Who knows. 😛

As for the other pairing, it’s one-sided and twisted, so I don’t know who’d find it enjoyable. I already mentioned that Mylandah was only wanting Lahrri’s attention, and anyone that got in the way would feel her wrath. Over time, Mylandah became more unhinged, but Lahrri never noticed her, and because Mylandah was pretty hatable, I’m happy about that.

I’m sure my yuri score might seem low to some people, but I need more than just a girl being kind to another girl. The bar shouldn’t be so low that being kind to someone automatically translates to liking someone in a romantic way. The yuri in this anime wasn’t quite that uninspiring, but I was still expecting something more.

To no one’s surprise, this sports anime does involve some fanservice, but it’s generally mild and is aided by the Barbie-like appearance of the girls—e.g., no nipples—so I don’t think this was a big deal. I was expecting more segments of athletic competition, but those present were generally well-animated and did a good job of displaying the intensity you’d expect. This was back in 1997 and 1998, so it’s not easy to judge the visuals, yet I was satisfied with how this looked.

As for the sound, for the most part, I enjoyed the music, but even during the most heated competitions, I didn’t feel like the music was as epic or exciting as it could have been. In the older anime I’ve reviewed, I think this seems to be a trend, so maybe it’s simply a sign of the times. Elsewhere, I’m probably the only one who’s said this, but I really didn’t like Akari’s voice. I found it pretty annoying, even for a genki girl like her. I eventually grew used to it, but I just wasn’t a fan of her voice.

Despite the possibilities related to a futuristic athletic competition, Battle Athletes OVA turned out to be more similar to normal athletic competition than I was hoping, and the utterly predictable storyline took away from my excitement. The events were still enjoyable and spirited, but the slightly above average cast of characters weren’t enough to win me over, and the yuri could’ve been a lot more evident. People seemed pretty enthused about seeing this series return, but now that I’ve watched the OVA, I’m still wondering why.

– Felt like Akari was always going to win, one way or another
– I would have liked to have seen more serious athletic competitions
– Needed more yuri