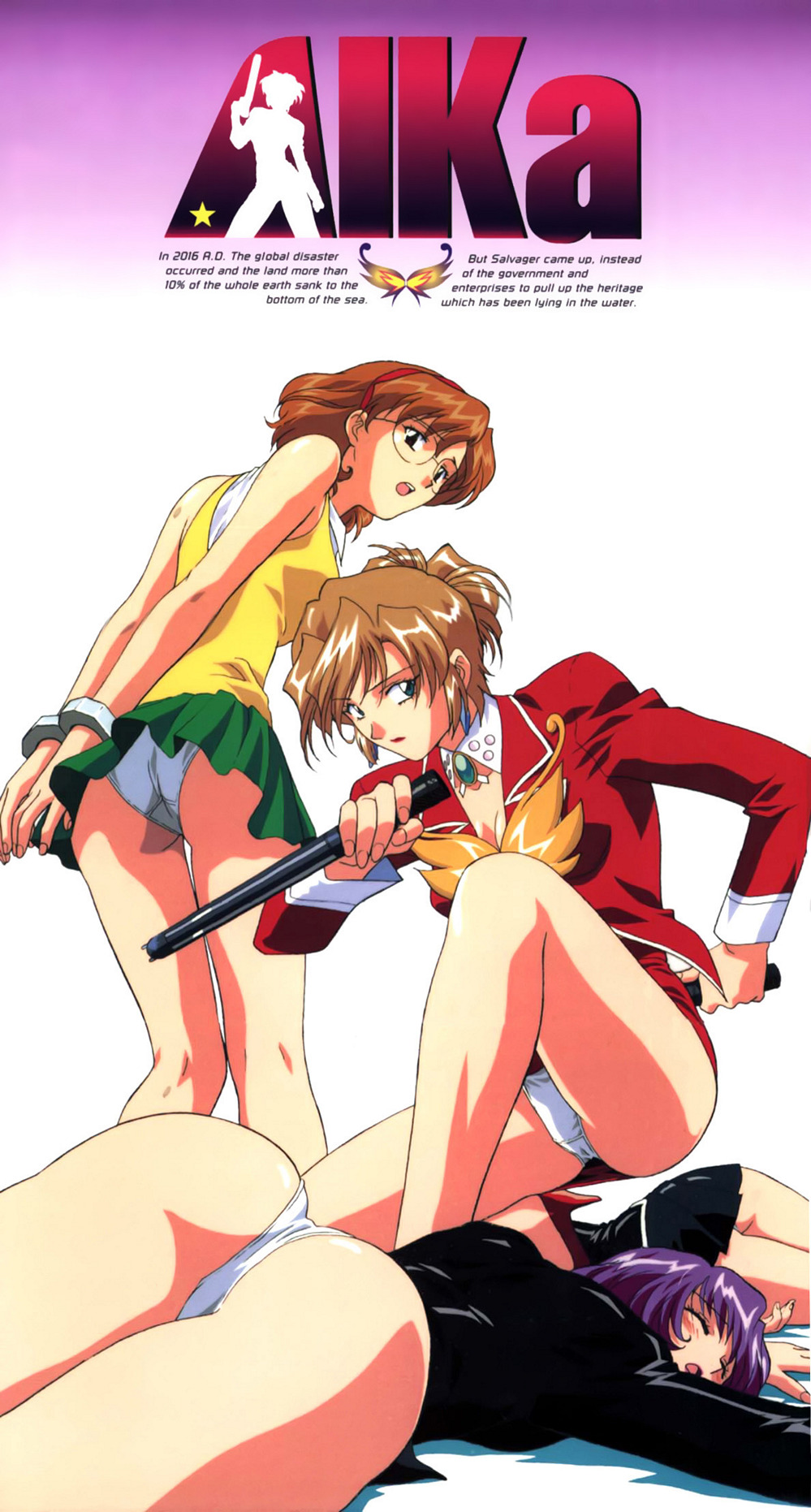 Synopsis: A catastrophic earthquake has left Tokyo, and most of the Earth for that matter, under the sea. Aika is a salvager who retrieves various remains from the watery ruins. When Aika accepts the dangerous mission of locating and obtaining the mysterious Lagu, she discovers that she’s not the only one after it.

First off, I should mention that this OVA is listed as having seven episodes, but the last three of those are essentially filler, so for maximum enjoyment, I’d recommend just to stop watching after episode four.

Despite a somewhat interesting premise of a catastrophe that essentially turned the Earth into a waterworld, it doesn’t take long to realize that any hopes of a serious plot are washed away in a sea of panty shots. This anime is ecchi, and it embraces that fanservice wholeheartedly, but more on that later. The story of AIKa involves the typical assortment of over-the-top action, cheesy comedy, and villains who try to take over the world.

That’s hardly original, but for a while, this anime is actually kind of enjoyable, in a guilty pleasure sort of way. If you can turn your brain off and just soak in the mindless action, you might have some fun watching this. I don’t know if I’d classify it as “good”, but it is “entertaining”, and that has to count for something. As you’d expect, the storytelling is poor, complete with a lack of character development and many absurd situations.

The comedy was really campy, and while I didn’t find this anime that funny, I wouldn’t be surprised if other people disagree with that assessment. But as decent as this anime was for a while, it all fell apart for me in the final three episodes. You see, the main villains are disposed of at the end of the fourth episode, and what we’re left with are their minions, which had proven themselves completely inept for the entire duration of this anime.

The final three episodes definitely feel like filler, and during this stretch, a lot of what made this anime entertaining is either completely gone or toned down greatly. This extends to the story, which goes from stereotypical (yet cool) villain ideas, such as using satellites as weapons, to harebrained ideas like inviting Aika and friends into their base, in an attempt to steal data from her. Compared to what came before, the story was underwhelming, the action was underwhelming, the comedy was underwhelming, the villains were underwhelming, and it felt like the series was just going through the motions at this point.

The story wasn’t good, yet it had some entertaining things going for it, until it didn’t anymore. There’s nothing wrong with being a guilty pleasure, but when almost half of this anime is uninspired filler? It makes it really hard to enjoy what AIKa had to offer.

For a main protagonist, I thought that Aika was actually pretty entertaining. She kicks a ton of ass, all while wearing a mini skirt (or less), and I’m glad that, unlike so many other anime, Aika isn’t a middle school or high school student. She’s an adult, and while that may not seem like a big deal to most, I found it refreshing. Of course, Aika isn’t a normal person, so when she transforms and goes all Wonder Woman on the baddies, you can’t help but think that’s she’s pretty badass. She doesn’t have much in the way of personality, yet she’s exceptional at kicking ass and looking good, so I can’t be too harsh on her.

As for the yuri, it’s also really disappointing. You might assume that Aika and Rion would get involved, since they’re co-workers at the salvage company and essentially do everything together, but you’d probably be wrong in that assumption. There’s nothing that really suggests that the two of them have anything more than just a friendly relationship, so the yuri actually comes from the generic villains that are left over after the main villains are disposed of.

Called the Delmos, we see two Delmo girls kiss, and in another episode, we see another Delmo girl crossdress in an attempt to seduce Aika (it somehow works), which results in them sharing a yuri kiss. I’m happy that the List of Yuri Anime Kisses post got a couple of contributions from this anime, but for yuri fans, two meaningless kisses involving unimportant characters are definitely not enough to justify watching this.

I could’ve swore I saw a few yuri clubs listed on this anime’s MAL entry, but since I don’t see them there now, the only explanation is that I’ve changed world lines, Okabe-style. 😛

Anyway, I mentioned Rion, and I actually found her pretty entertaining. Yeah, she’s always getting herself into hot water, but she’s cute while doing it, and she’s essentially the comic relief. Probably the funniest moments for me were when Rion met up with Maypia, a spy infiltrating the villains’ ship. They’re equally incompetent, so put them together and you get some decent comedy. Speaking of comic relief, that also kind of applies to Gust, who did prove useful to Aika in a few situations, but he’s also extremely campy. In the last three episodes, Gust’s place in the cast is largely taken over by some other guy, but that guy isn’t funny or entertaining in any way, and you know it’s bad when his attempts at comedy resort to him using a hand puppet.

As for the two main villains, they’re also standard fare, but the most interesting thing about them is that they’re siblings involved in an incestuous relationship. That’s interesting, in a really gross kind of way. Nena was the far more interesting of the two, I’m just disappointed that she didn’t present a bigger challenge to Aika, especially given that she had a similar suit. They were mediocre villains, at best, but at least they’re not the Delmos.

So the characters weren’t as bad as the story, yet they weren’t enough to carry the anime through the rough times, and aside from a couple of shallow kisses, the yuri was also lacking.

The one thing that I think AIKa did do well was the animation. I thought that the fight scenes were well-done, and the abilities of the ultranate suits were pretty impressive to see animated. As cool as the battle scenes were, the biggest takeaway—from a visual standpoint— was seeing how many panty shots were included. The level of fanservice is really high, and if there was a world record for anime panty shots, AIKa might be a contender for the title. There were also some topless shots, as well as plenty of naked asses, so people solely tuning in for the fanservice probably loved this. The director earned his keep with how he managed to include that many asses in his shots. I thought the music was very forgettable, so while it wasn’t bad, I was never drawn to it in any meaningful way. I managed to watch one episode dubbed, and while it wasn’t as bad as I expected, I still stand by my opinion that subs are far superior. 😛

If AIKa was only four episodes, I think I would’ve given this anime a Total Enjoyment score of 6, which isn’t exactly a ringing endorsement, but it was undeniably entertaining. After that, it’s decidedly less so, and the overall package is marred as a result. Yuri content is low, so that won’t save the day, and despite there being other AIKa OVAs and a special, I think I’ve had my fill of this series.