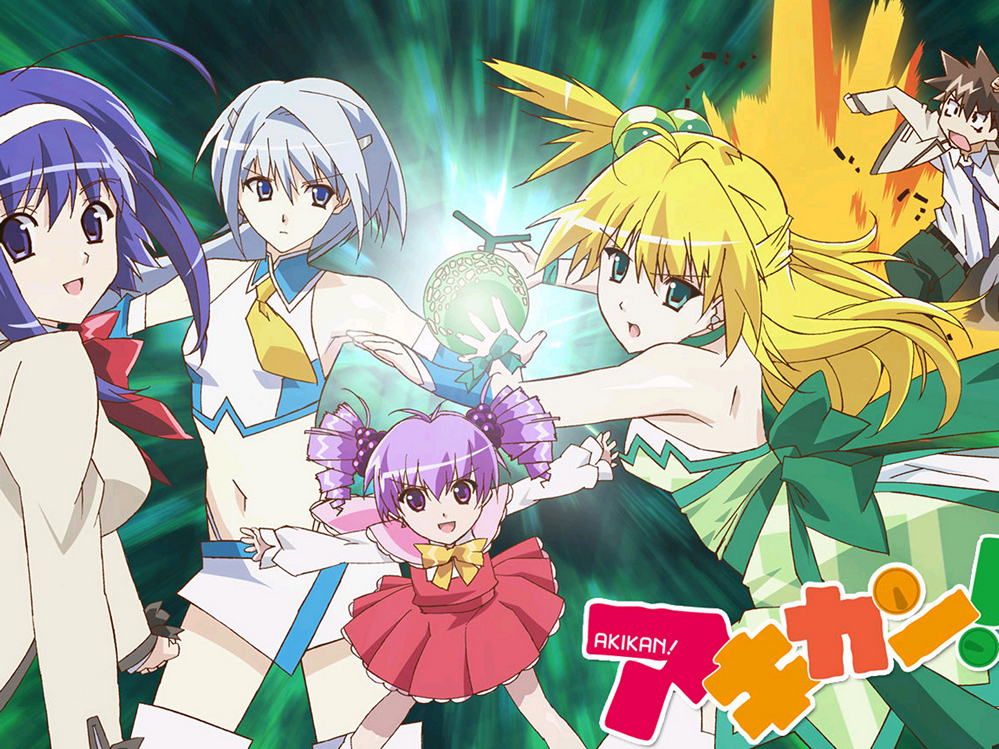 Synopsis: Hobbies are often a great way of meeting new people, but how could Kakeru Diachi, who collects rare juice cans, have ever suspected that he’d meet a fascinating new girl when he attempted to DRINK her? Naming her Melon, because she’s got great melon… soda, Kakeru quickly learns that she’s an Akikan—a beautiful girl who’s also a special can created to fight other Akikans in a strange experiment to determine what kind of container is better: steel or aluminum!

Will becoming involved in this ridiculously twisted research project gone amuck complicate Kakeru’s life incredibly? Of course it will, but because Melon’s steel body needs carbon dioxide to breathe, he’s now stuck with her since she’s too CO2 dependent! And when his wealthy, attractive, best childhood friend Najimi gets HER own aluminum Akikan, the trouble really begins!

This is my 182nd review on YuriReviews, and over that span, I’ve experienced all manner of stupid plots, but Akikan!‘s story still stands out for all the wrong reasons. You can read the synopsis above and tell how stupid this story is, yet a stupid story doesn’t automatically make this a bad anime. Rather, the reasons this is a bad anime include the absurd story, lousy character development, horrible attempts at “romance”, and the equally bad attempts at comedy.

Soft drinks that turn into girls is a weird idea, but nothing interesting comes of this. Early on, the aluminum vs. steel debate seems like it might steer the plot in a slightly interesting direction, but nothing really becomes of that argument. Instead, we’re treated to Kakeru trying to manage this newfound relationship with his Akikan, as well as manage his relationship with his childhood friend, who just so happens to like him. More than anything, this anime is your standard relationship comedy, just one with a strange twist.

Comedy and Romance are listed among this anime’s genres, yet I didn’t find this anime funny at all, and after reading the synopsis, did you really expect much from the romance? The comedy is basically nothing more than dirty jokes and physical comedy. Shimoneta was a really enjoyable anime, so it’s not like I frown upon dirty jokes or anything, it’s just that the dirty jokes in this anime were lame and were delivered by an often insufferable main character. The sort of love triangle that emerges between Kakeru, his best friend, and his Akikan is as stupid as you’d think, and since Kakeru is a delusional pervert, none of this so-called “romance” is enjoyable.

At least this love triangle phase doesn’t last too long, and we do get some much-needed conflict when a rival Akikan shows up. Akikan! has a bit of fighting, but that’s not this show’s main focus, and over the course of the anime, only four different Akikan are introduced. I could’ve used more fighting, because what is here was just not very interesting or entertaining to me. Character development is the bare minimum, and any drama introduced is impossible to take seriously, given Kakeru’s habit of injecting his personality into every ounce of this show.

What once sounded a little interesting ended up being nothing more than cliches and bad jokes, so there wasn’t much about the story that I actually enjoyed. I should also mention that this anime had quite possibly the most boring anime episode that I’ve ever seen. By nature, filler is boring, but this made other filler episodes seem entertaining in comparison. As for another aspect of this show, I don’t think the characters were that much better than the story.

If you read the previous section, you’d know by now that I disliked Kakeru, so no need to waste any more time on him.

Melon is his Akikan, and I wanted to like her more than I did, I just couldn’t find enough reasons to. She gets bonus points for keeping Kakeru in check when he’d cross the line, but besides that and her status as an Akikan, she didn’t seem very interesting or entertaining to me.

Kakeru’s childhood friend, Najimi, somehow liked him, so she gets points removed for that. She seemed nice and all, but how anyone can like that guy is beyond me, and it seemed like that was almost her entire reason for existing. Najimi was as bland as can be, though she later gets her own Akikan, and that Akikan ended up being more enjoyable to me.

Unlike Melon, Yell is a sports drink instead of a soda, and even though she has a serious demeanor and only cares about serving her owner, I found her to be pretty likable. Part of that has to be thanks to how little I cared for the other characters, but it was nice to see someone who wasn’t annoying or trying (and failing) to be comic relief. Melon and Najimi were close, and because of how Akikan turn from can to girl (their owner drinks from their can, resulting in a kiss) we got several new additions to our List of Yuri Anime Kisses post, but Najimi was in love with Kakeru, so no need to read too much into those yuri kisses.

In addition to those kisses, this show also has a yuri character, fittingly named Yurika. All season long, she’s after Najimi, and since they’re friends, we get some typical yuri character antics. Compared to other yuri characters, she doesn’t really stand out or do anything you haven’t seen done better a hundred times, but when the bar for romance is this low, she doesn’t have to for you to take a liking to her.

The third and final Akikan/owner pair is basically an afterthought, but Budoko is one cute loli, and I thought she was one of the most entertaining characters in the show. And then there’s the antagonist, who literally has the stupidest motivation I’ve ever seen. It seemed too stupid to be true, but we don’t even learn this important nugget until the final minutes, and by then, it’s far too late to do anything but chalk it up as another lowlight.

I’m happy we got a lot of new yuri kisses from this show, but that’s not a replacement for actual yuri romance, and a dedicated yuri character isn’t either. There just weren’t many likable characters for me, and worst of all, the protagonist is sure to be loathed by many who watch this anime.

Akikan! is listed as ecchi, and I can understand that, but I don’t think the fanservice is overwhelming at all. I fully expected more, and between this show’s yaoi character (that’s right, a yaoi character) and Kakeru spending half of the first episode in nothing but a towel, the fanservice actually goes both ways. As for the art and animation, I was a little surprised to learn that this originally aired in 2009, since I might’ve guessed mid-2000s, at the latest.

The battle scenes are unremarkable yet decent, and that’s a pretty good way to describe the music as well. Fitting with the tone of the show, the music is often playful and goofy, but even during the action scenes, I found it to be all too forgettable. Personally, I was kind of annoyed by Melon and Najimi’s voices, though that’s even more subjective than practically anything else.

It’s not good when you’re a comedy anime that isn’t funny and a romance anime that features a sorry excuse for romance. That’s what Akikan! can lay claim to, and despite the different-sounding story, this anime was stilll a familiar mix of bad and bland ideas. No amount of yuri kisses can save Akikan!, so you might as well save your energy and skip this one.