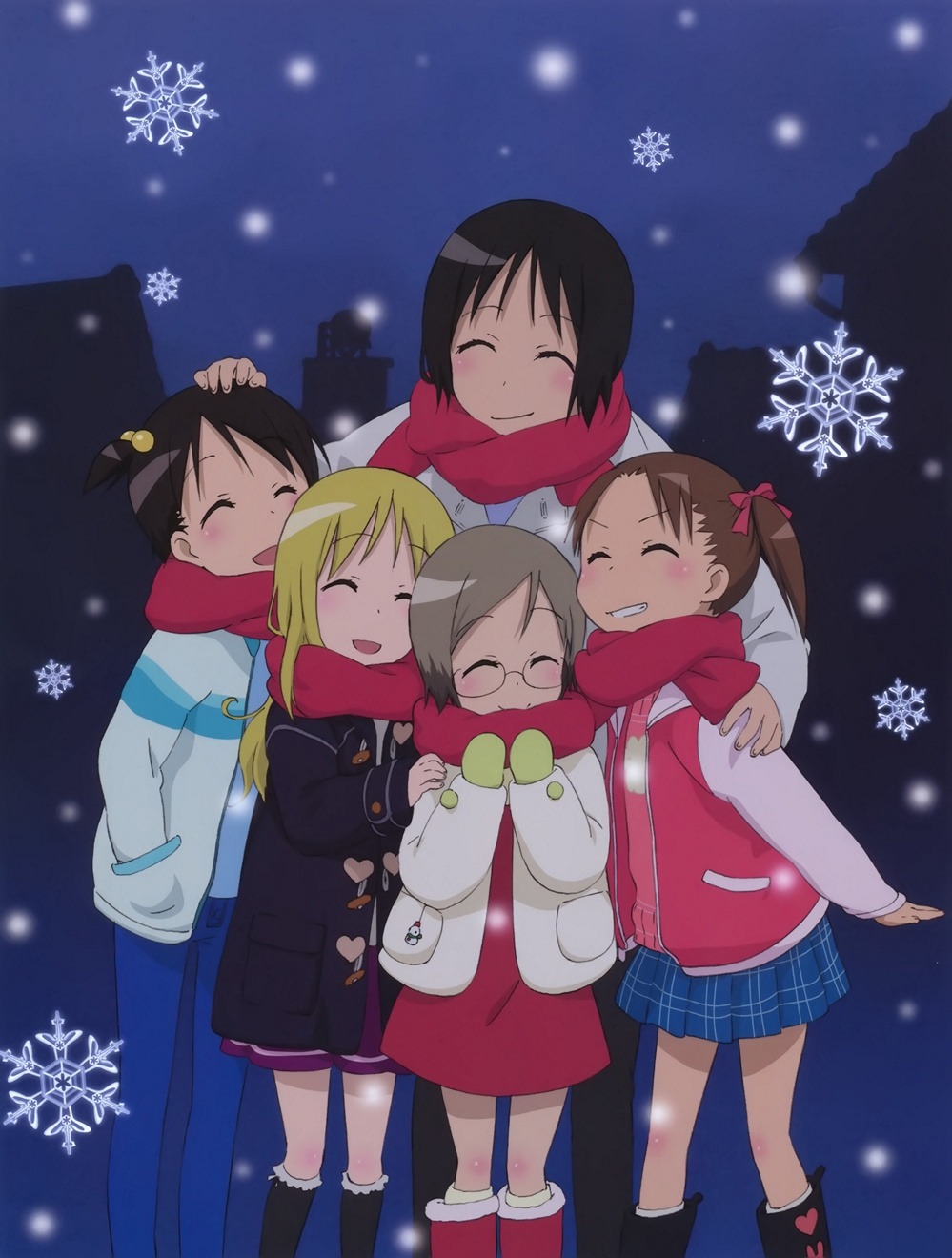 Synopsis: “Cute girls doing cute things in cute ways.” Everyday things make up the fabric of life—whether it’s making friends, going to school, trying to make money, or celebrating a holiday. Ichigo Mashimaro is a heartwarming series that follows the daily lives of Itou Chika, her sister Nobue, and her friends Miu, Matsuri, and Ana.

Let’s not waste any time and dive right into the story, which is exactly what you’d expect from a slice of life anime. That’s to say that there isn’t much of a story. It’s just cute girls doing cute things, and while that won’t get it a good score, the low story score doesn’t mean that this isn’t an entertaining anime.

Because of this genre’s tendency to lack compelling stories, comedy usually plays an important role, and I feel like Ichigo Mashimaro did pretty well for itself in thir regard. For the most part, this isn’t an anime that’s overly reserved and easygoing, like GochiUsa, so there are plenty of comedic moments that help make this anime pretty fun to watch. I definitely wouldn’t say that this is as funny as Yuru Yuri or KinMoza, but I still found pretty much every episode amusing and enjoyable. The running gag of Miu getting KO’d never grew old for me, and I had some laughs while watching this show.

You’ll find some of the expected anime scenarios here: a beach episode, a festival episode, an onsen/bath house episode, and more. The situations largely play out like you’d imagine, yet I thought they were entertaining, nevertheless. I was happy to see that there isn’t a huge emphasis put on the girls’ school life, even though there are a few scenes here and there that do take place at school. Instead, the setting is often Nobue and Chika’s house, where all the girls gather and just hang out. I don’t mind the lack of originality, and for anime in this genre, I generally just expect things to be funny and cute, and I think Ichigo Mashimaro succeeded in both aspects.

Compared to most other slice of life anime, Ichigo Mashimaro has a pretty small cast of characters, with only the main five girls playing important roles. That ensured that each of them had their chance to shine, and I have to say that I found these girls to be really good together.

It all starts with the leader of the “harem”, Nobue. Since her and Chika’s parents are never shown and neither are the parents of the other girls, it’s Nobue’s responsibility to look after the girls, and I thought that she was the perfect middle ground between caring and slightly annoyed. Her laid back approach suits her well and allows plenty of room for the girls to take things in fun and amusing directions, which they excel at. If you’re wondering how yuri is involved in this anime, Nobue is the source, but this isn’t UzaMaid we’re talking about here.

Most of the yuri subtext can be traced back to when a drunk Nobue seems to take a liking to Ana. This only results in Nobue giving Ana a hug, and while Nobue did sometimes show preference to Ana and show a little bit of interest in her, it’s mild and so little that I doubt many people would have a real problem with it. At one point, Nobue is asked who she finds the cutest, but she rephrases the question and asks herself who she’d like to go on a date with the most. She chooses Ana and Matsuri. Nobue may very well be into girls, but it’s just not made clear enough. Because there are three yuri clubs attached to this anime on MyAnimeList, I expected a lot more from the yuri, but MAL let me down again. When am I going to learn?

Moving on, out of all of the characters Chika was my least favorite. She seemed the most like your average anime protagonist, right down to being rather uninteresting and unremarkable. I thought her best moments were when she was reacting to something the others (usually Miu) did/said, and she essentially played the straight man to Miu throughout the entire season.

Which brings me to the most colorful character in the show, Miu. She’s the prankster that’s always causing trouble and always annoying the others. If Chika lacked personality, Miu definitely made up for it, and without her, I don’t think this show would be nowhere near as entertaining as it turned out to be. There were a couple of times when even I found her annoying, but those moments were over with fairly quickly, and Miu went right back to being a lovable joker.

The other two characters were Ana and Matsuri, and as the eleven-year-olds in the group, they were sweeter and more laid back than Miu or Chika. Matsuri was all about being cute, and out of everyone, she was undoubtedly the cutest. Her timid personality added to this, so she was another character that I really liked. In all my years of watching anime, I’d never seen a gaijin character be unable to speak English, but that all changed with Ana. Like Matsuri, she’s polite and sweet, and a great deal of her entertainment value came early on when pretended not to know Japanese, but she’d actually almost completely forgotten English. Ana had less standout moments after that, but I still liked her.

So many times on here I’ve mentioned how a certain character didn’t get enough screentime because the cast was too big, so I’m glad that that wasn’t a problem in this anime. All five of the girls were entertaining in their own way, yet Miu really took over this show and cemented herself as the most entertaining of the bunch. Nobue’s slight interest in Ana could’ve been a lot more evident, but it might not have fit in that great with the tone of the show. There was so much cuteness going around that the motherly vibe Nobue sometimes gave off might’ve been lost, so maybe the lack of yuri wasn’t necessarily a bad thing in this case.

Like the story, animation and sound just aren’t very important to these cute girls doing cute things anime. There are very few opportunities for the art and animation to show something very interesting, and more often than not, it’s simply about showing off these cute girls. That said, I think Ichigo Mashimaro actually looks quite nice for a slice of life anime, considering it premiered in 2005. That may say more about the genre than anything else, but the point still stands. If what you want is cute, this anime delivers, and all of the girls come across as very adorable (even Nobue). There’s practically no fanservice to be found here, which honestly surprised me a little bit. Excluding Nobue, these girls are only eleven or twelve, but that’s never stopped Japan from wanting to show some skin, so I’m happy that this anime remained as wholesome as can be.

As mentioned above, the sound is usually an afterthought in slice of life anime, and this anime is no exception. There were a few easygoing scenes that went for an overly sweet and melancholic tone, but apart from these, I rarely noticed the music. I don’t view this as a bad thing, just something that’s the norm for shows like this. Voice acting is fine, and overall, the minimalist approach to audio should be something that everyone expects while watching a slice of life anime.

To sum it all up, I wouldn’t list Ichigo Mashimaro among my favorite slice of life anime, but I can’t deny that it provided most of what I want to see in this type of show. It was very cute, had entertaining characters, and featured some enjoyable comedy, so fans of the genre might like what this show has to offer. Just don’t expect too much from the yuri.

+ Very, very cute
+ A small cast of enjoyable characters
+ A lot of fun 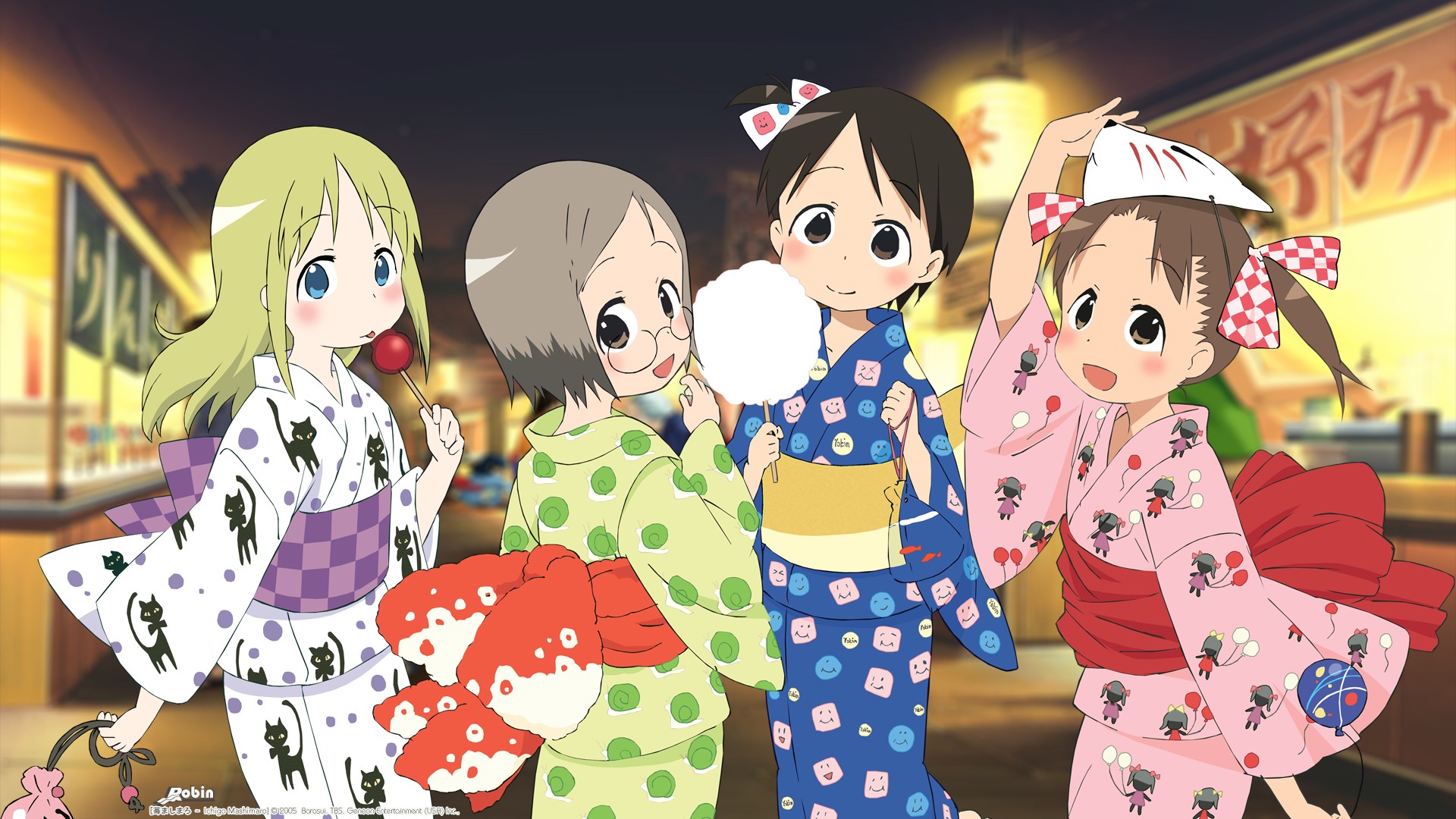