It’s that time of the year again, so enjoy our First Impressions of the 2020 fall anime season that just started~ 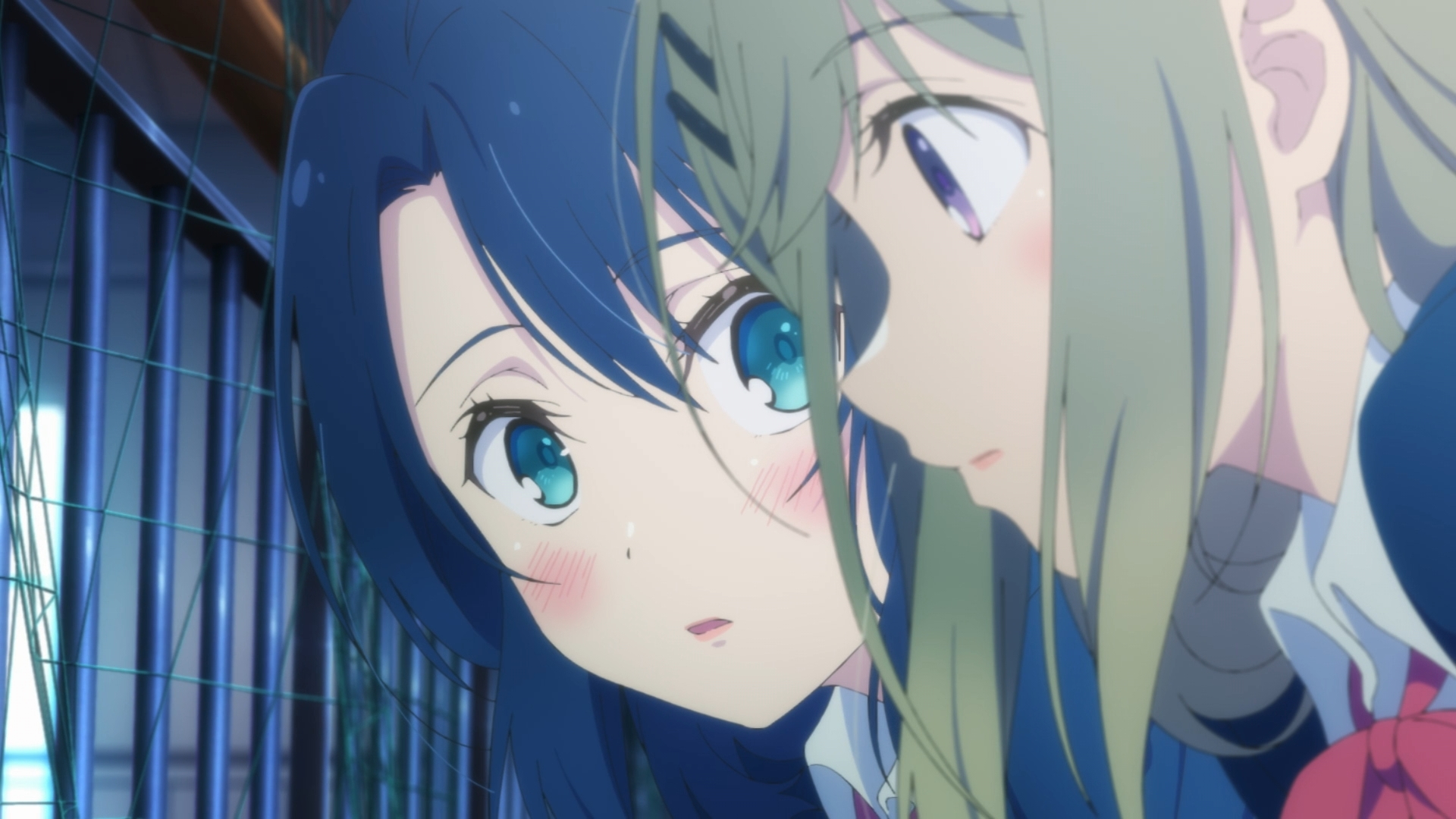 At last, we finally have another pure yuri anime to watch. I need to mention that I’ve never read the light novels, so this is all coming from someone who’s brand-new to the series. With that out of the way, wasn’t this a good first episode? Things are already really cute, despite Adachi and Shimamura being just friends, though you can sense the romance starting to blossom. I’m actually glad that they aren’t already together, since the lead-up to that is almost always fun to watch. I really enjoyed the narration from Shimamura, since it gave me, an AdaShima noob, valuable insight into her thoughts.

Both Adachi and Shimamura already seem really likable, and the same can be said about the chemistry between Hino and Nagafuji. I’m looking forward to seeing Adachi become a regular member of the group, as well as seeeing more of that little astronaut character. Remembering back two or three years ago when we did have pure yuri anime, I wasn’t a huge fan of those shows that had a lot of melodrama, like Netsuzou TRap or even Citrus. Asagao to Kase-san. was much more my style, and AdaShima feels like it’s going to be a lot closer to that than the other two, so I’m thrilled about that.

This show had more fanservice than I was expecting, even though we’re only talking about legs and thighs. It was nice to see that this anime has good production values, and even though the story is likely just going to be a rather simple and straightforward romance, the first episode was already really effective at setting the mood. To me, episode one was already more enjoyable than the entirety of Flag Time, and I can imagine those thoughts will only be strengthened once the romance really picks up. The wait for yuri anime has been tough, but we might have a really good one on our hands, so tell your friends and tell your neighbors that they really need to be watching this~ 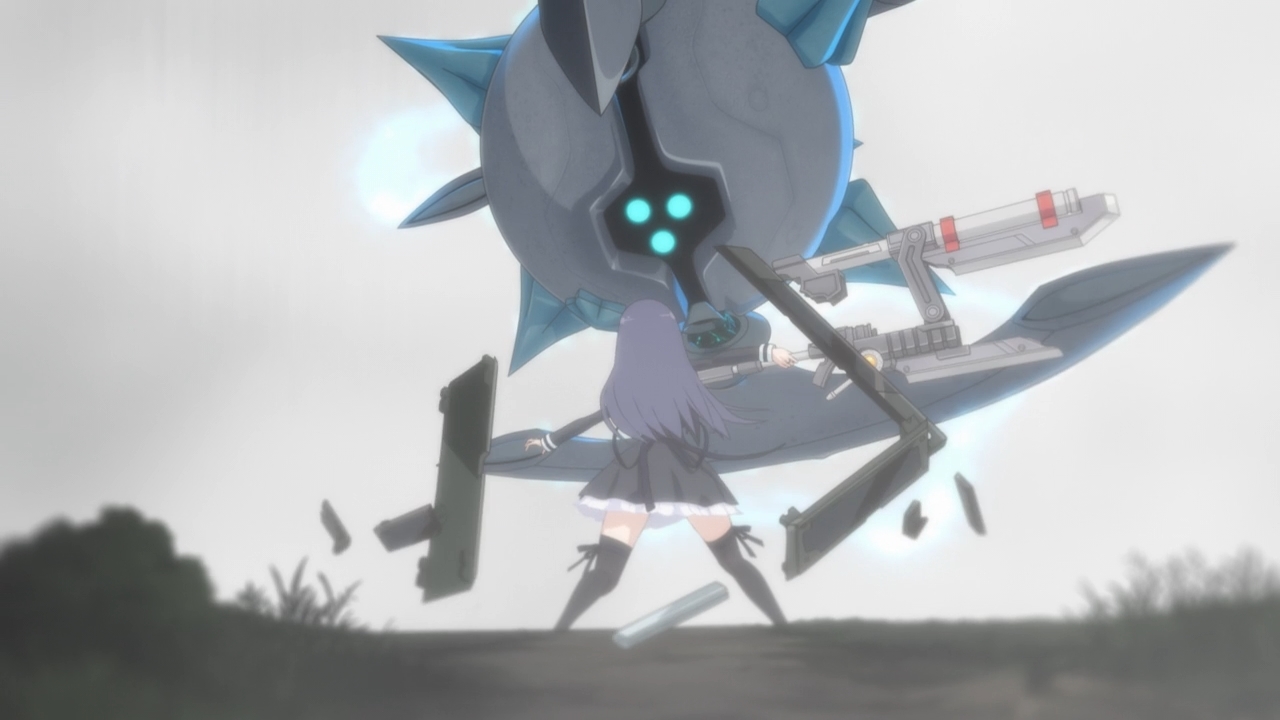 In the lead-up to its debut, it seems that Assault Lily: Bouquet has really been trying to win over the yuri fans, and the first episode confirmed that yuri fans should definitely be watching this. We all expected the MadoHomu vibes between the two protagonists Riri and Yuyu, but the real yuri star of the episode was Kaede, who went from being Yuyu’s admirer to Riri’s admirer, so she’s become my favorite character so far. We haven’t been introduced to that many characters yet, but it already seems like there’ll be plenty of stock character types involved, so that’s kind of a bummer. I know it was just a small sample size, yet I also don’t expect too much from the story. A prestigious girls academy trains girls to defend humanity from monsters, blah, blah, blah. It’s hardly original, and as a result, my expectations for this series are relatively modest.

That said, I thought this first episode was pretty entertaining. Yeah, the story felt generic, but the action and animation were nice enough, and while I don’t think this anime has a high ceiling, it seems to me that it might not have a very low floor either. A good chunk of the episode was playful in nature, so I’m really glad this isn’t a dark and depressing anime. I’d expect more yuri to come our way in future episodes, and that’s more than enough to keep me interested in this show. So if you’re into magical girls, this anime should be right up your alley, just have realistic expectations going in and don’t expect something as engrossing, original, or mahou-tastic as Madoka★Magica. 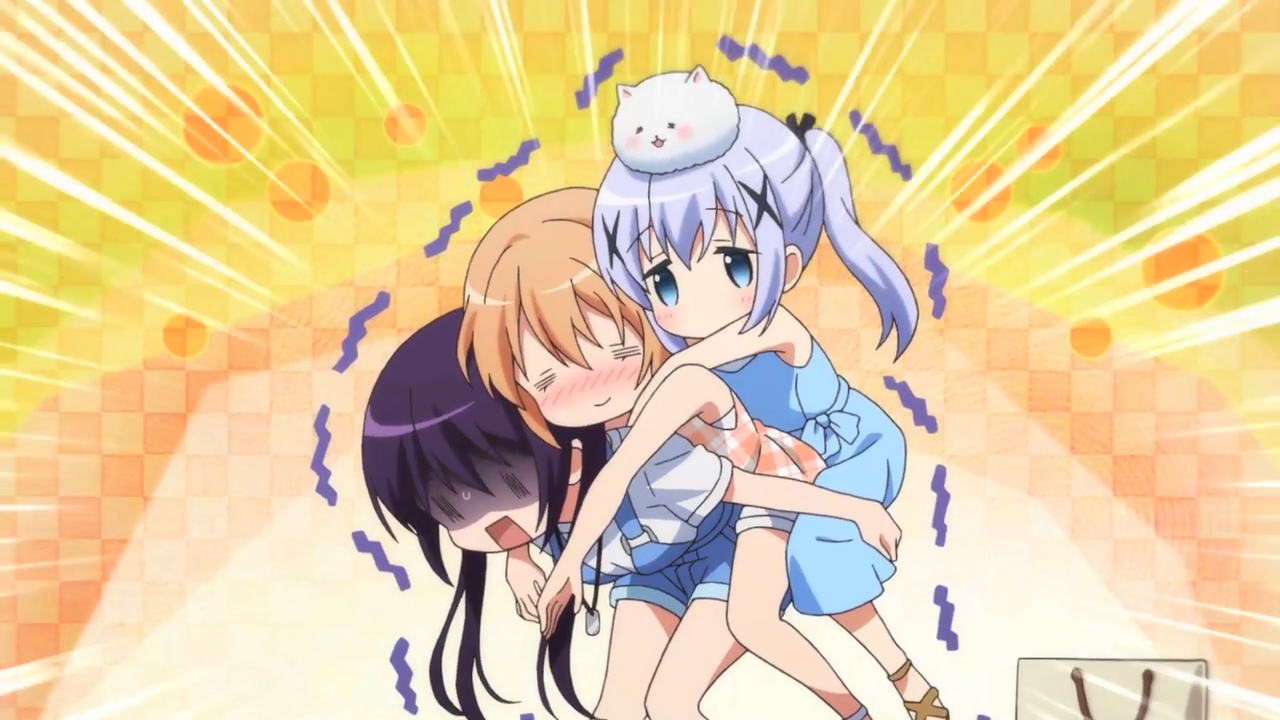 Given how this year has turned out, GochiUsa seems like the perfect anime to watch right about now. Once again, the series sees its production handled by a different studio, but I don’t even think it matters at this point. All that matters is that we get the usual blend of cute girls doing cute things, and if that happens, the series will continue to be as entertaining as ever. Well, all the girls are back, and even though I haven’t watched a GochiUsa anime since the second season all the way back in 2015, the first episode was a great reminder why I’ve enjoyed this series so much.

The ever so charming girls and the relaxed atmosphere just never gets old, and while there may be a lot of cute anime out there, you could make a strong case for GochiUsa being the cutest of them all. In this first episode, there’s a good dose of comedy, and the personalities of each of the girls shine through. I was happy to see that Sharo still has a thing for Rize, but the yuri in this series has never been one of the main focal points, and I don’t expect to see a whole lot of yuri moments between them in Bloom. I’d love to be wrong about that, but the cuteness and wholesomeness is more than enough for me. Since the beginning, GochiUsa has been incredibly consistent entertainment, and so far, it doesn’t look like that’s going to change with this new season. 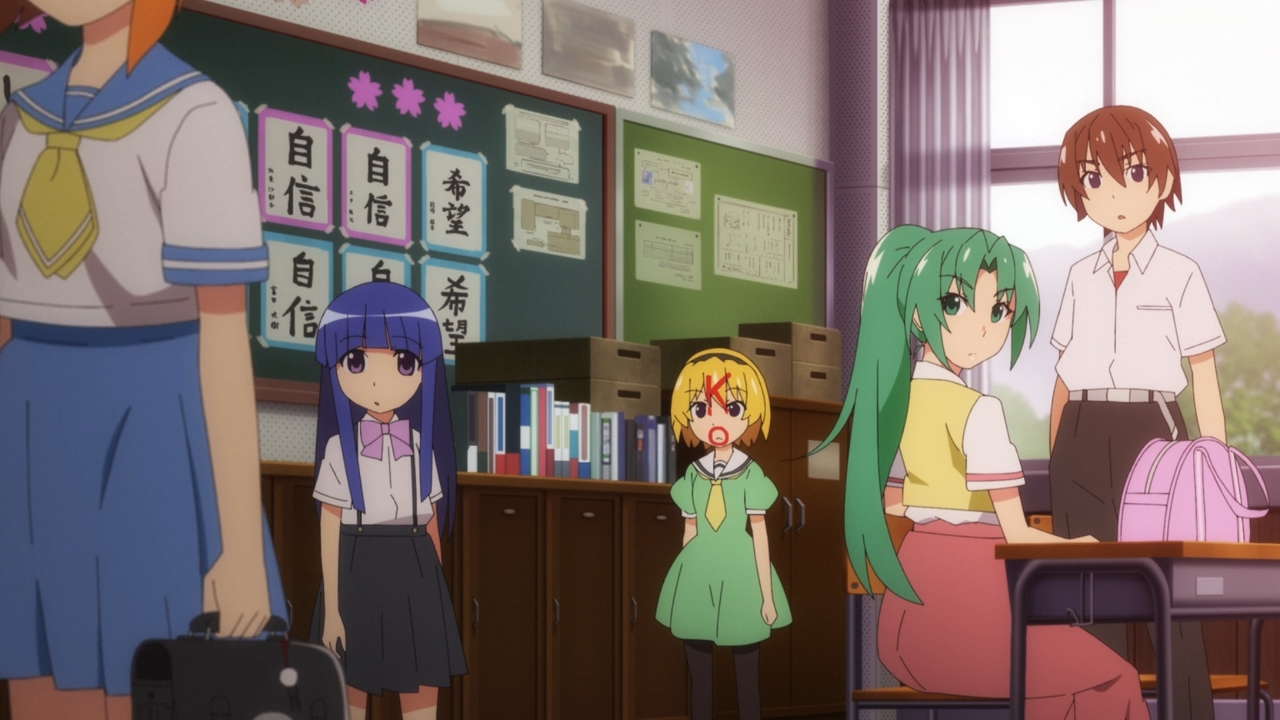 Years ago, I had the pleasure of watching Higurashi and it’s many sequels and spin-offs, but I have to admit that I was worried about this latest installment. I knew it was bringing back the original cast, yet the original Higurashi was a classic that still stands up pretty well after all these years, and this remake or reboot or whatever it is, seemed kind of unnecessary. Still, I had to pick it up, and even though it’s only one episode, I thought this acquitted itself quite well. The art style will definitely take some getting used to, but you do get flashes of that great mix of horror and suspense wrapped in a comedy/slice of life aesthetic. I only vaguely remember how the story of the original went, but the torture and the murder and the batshit craziness of it all was something that I loved, and it’s safe to assume that Gou will follow suit as well.

Since this first episode wasn’t a trainwreck, I’m now cautiously optimistic that this might do the series justice, while introducing new fans into the fold. I haven’t watched beyond this one episode, but I’ve heard that the story starts to differentiate itself in episode two, so I’m looking forward to seeing if this really is a remake or a reboot. For once, I don’t feel scared off by the fact that this is two-cour anime, and I’m ready for all of the messed up shenanigans that this new season wil hopefully be giving us. And in case anyone not familiar with the series is wondering, no, this isn’t a yuri-ish franchise, so if you’re not interested in grisly deaths, you’d be best taking a hard pass on this one. 😛 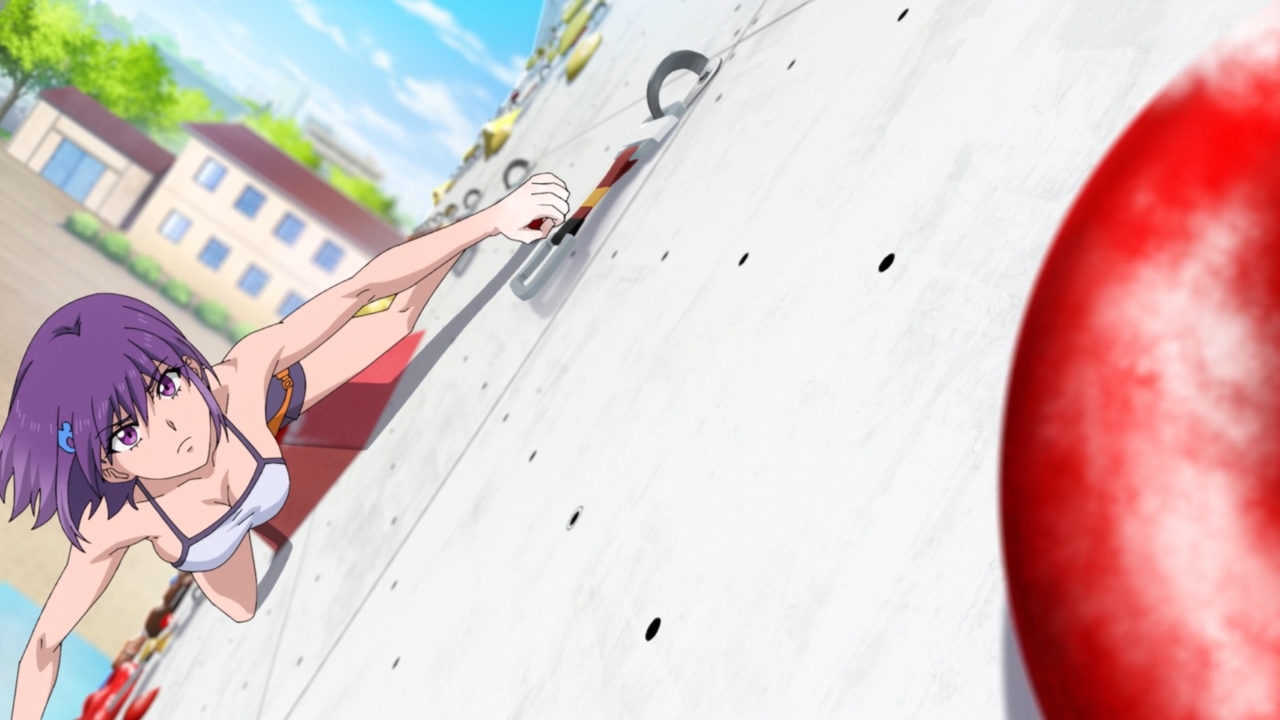 If I see an anime that seems to star only girls, it’s like a switch goes off in my head urging me to watch the show. That’s what happened with this anime, and part of the reason is because I was hoping for some low-key yuri subtext. Just so you know, there’s no hint of yuri in the first episode (though two of the girls do hold hands while sleeping in the ED). Instead, I was reminded of another unlikely sports anime Harukana Receive, due to them both being a serious sports anime and because of the fanservice in each. The fanservice in this first episode was pretty mild and mostly consisted of action shots of fit girls, so I’m glad this isn’t a rock climbing version of Keijo!!!!!!!! or anything. 😛

I seem to be into these obscure sports anime, and it’s nice to learn a little more about sport climbing in this show. So far, the girls seem strong and entertaining enough to avoid appearing generic, so I was pleasantly surprised by how much I enjoyed this. I expect the story to resemble the stories in most sports anime, but as long as this anime can continue making the competition enjoyable, I probably won’t mind very much~