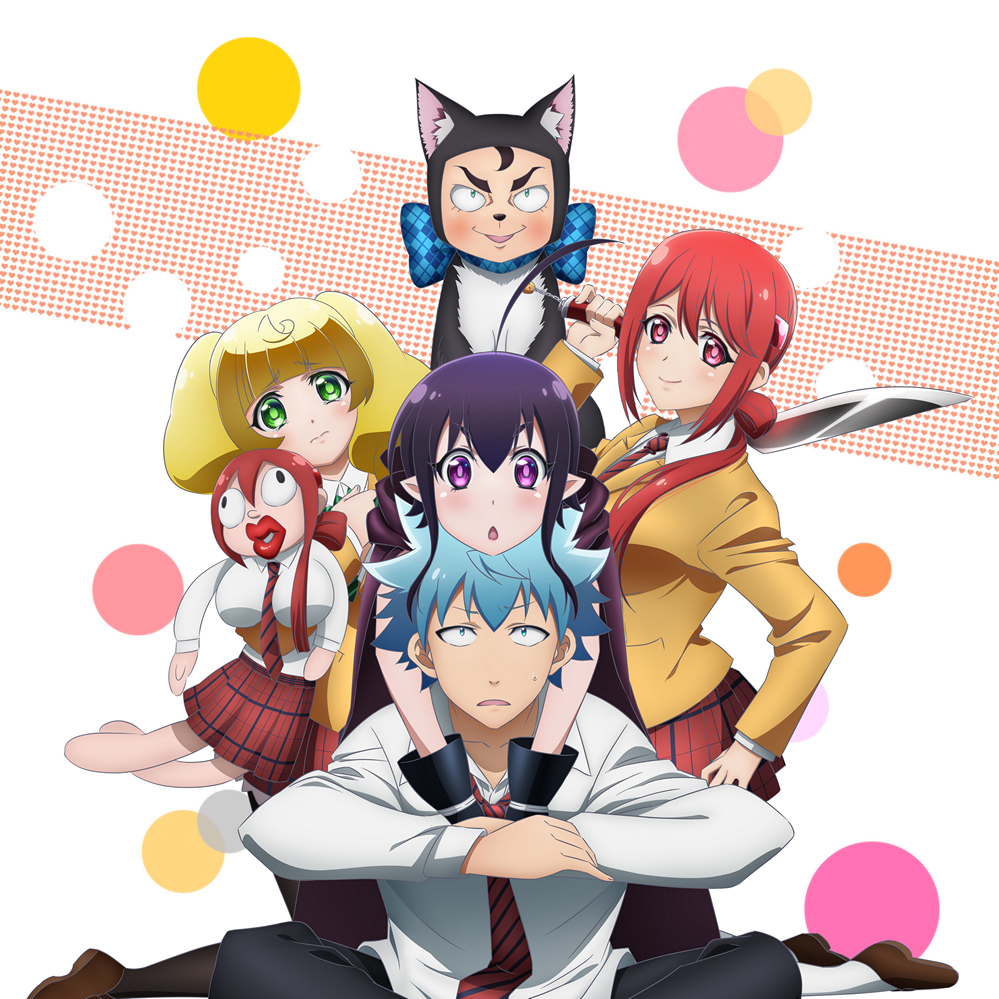 To a lot of anime viewers, harem is a kind of like a bad word. It brings to mind all sorts of unsavory situations that only seem to exist to perpetuate the stereotypical male fantasy of having multiple girls. We Love Tyrant is another harem anime that fits that mold, but I didn’t seem to dislike it as much as I typically dislike harem anime.

I think part of that has to do with how crazy the story is. That super long synopsis from MAL tells the gist of the tale, and compared to what I was expecting, romance doesn’t quite play as big a part as I thought it would. To me, that’s a very good thing, and that allows the comedy to become the driving force behind this anime. As an ecchi comedy, Love Tyrant strikes a lot of familiar chords, but the supernatural elements are a major part of what kept this from becoming just another generic harem anime.

I’ll discuss the characters later, but from a comedic standpoint, they all worked so well together, and I thought this show was actually pretty funny. I liked how the plot was actually building towards something more than just matchmaking and giving the protagonist more girl friends (we visit Heaven and Hell). That said, once the story became a bit more serious towards the end of the season, I was definitely not enjoying the show as much as I did back when things were more easygoing and stupid. It’s nice that there was some sincerity in there, yet this still was a harem anime, and it more or less played out that way.

So I thought the story was a bit more entertaining than I expected, however, my bar for ecchi harem comedies is pretty low, so maybe it’s best not to read to much into that statement. 😛

And now onto the characters. I already mentioned how they had great comedic chemistry, and they all contributed to make this my favorite thing about this anime.

In a harem anime, it’s easy to paint the guy as something akin to a horny villain who only cares about getting more tail, but I was quite surprised that Seiji was actually a pretty decent guy. He’s kind to everyone, isn’t driven by lust, and doesn’t really show strong romantic feelings towards any of the his girl friends. Yes, he ends up having three of them, but one of them is a yandere, another is only romantically interested in that yandere, and the third is an angel that does her best Haddaway impression and wonders what love is. Long story short, I didn’t hate him. 😛

As for the girl friends, they’re all really entertaining and a lot of fun. You can’t go wrong with a yandere, so Akane taking a knife to Seiji and Guri was always pretty entertaining to me. As time went on, I think I grew tired of her schtick, but she was undeniably a lot of fun.

While Akane was pining for Seiji, she had someone that was always pining for her, her half-sister Yuzu. This is the yuri portion of Love Tyrant, but as you might expect, it’s a very one-sided relationship. Yuzu checks all of the boxes that you’d expect a yuri character to check, so she was actually my favorite character in this anime. That’s great and all, but this is a harem anime, so it shouldn’t come as too much of a surprise when I say that Yuzu eventually finds herself having feelings for Seiji. Yeah, yuri fans tuning in will probably hate that. Yuzu never loses interest in Akane, but her liking Seiji will probably turn some people off to this show. Still, Yuzu was great, and this anime was a lot better because of her.

Guri was the angel, and her over-the-top silliness was greatly appreciated. For almost the entire duration of the show, she was mostly a walking, talking gag machine, yet I’ll take that over another bland love interest any day. Guri even kisses Yuzu at one point, but Guri takes a liking to Seiji as well, so don’t expect any more yuri actions like that from her.

There was one character I really disliked and could’ve done without, Shikimi. So while she did spice things up, she was very hatable, and let’s just move on already. Oh, and there was also a rapey penguin that was just way too creepy. I hated him as well. 😛

Disappointment from the unrequited yuri relationship and subsequent lesbian-turned-bisexual character aside, Love Tyrant had a lot of big personalities that helped make this harem anime a lot more tolerable than I expected. There was even a little bit of character development amongst the love polygon hijinks, so I think this was a pretty nice cast of characters.

Moving on to the production values, I don’t think they’re anything to write home about. I thought the art was nice enough, but the animation itself was kind of underwhelming and average at best. As is usually the case, the music didn’t leave a big impression on me, so while it’s there and fine, ir probably won’t make too much a difference to viewers. That’s pretty much all that needs to be said.

For an ecchi harem comedy, I think Love Tyrant surpassed expectations and delivered a stupid and fun experience that wasn’t a total waste of my time. It wasn’t enjoyable enough to change my opinion of harem anime, but I’d classify this anime as one that isn’t as bad as the others, and considering how low my expectations were coming in, I’d consider that a victory.

+ Not as shitty as some other harem anime
+ The male love interest isn’t so bad
+ Very, very weird

– Tune in for a yuri character only for her to go bi before it’s all over
– Yuzu deserved to be loved
– Did the world really need another rapey animal?