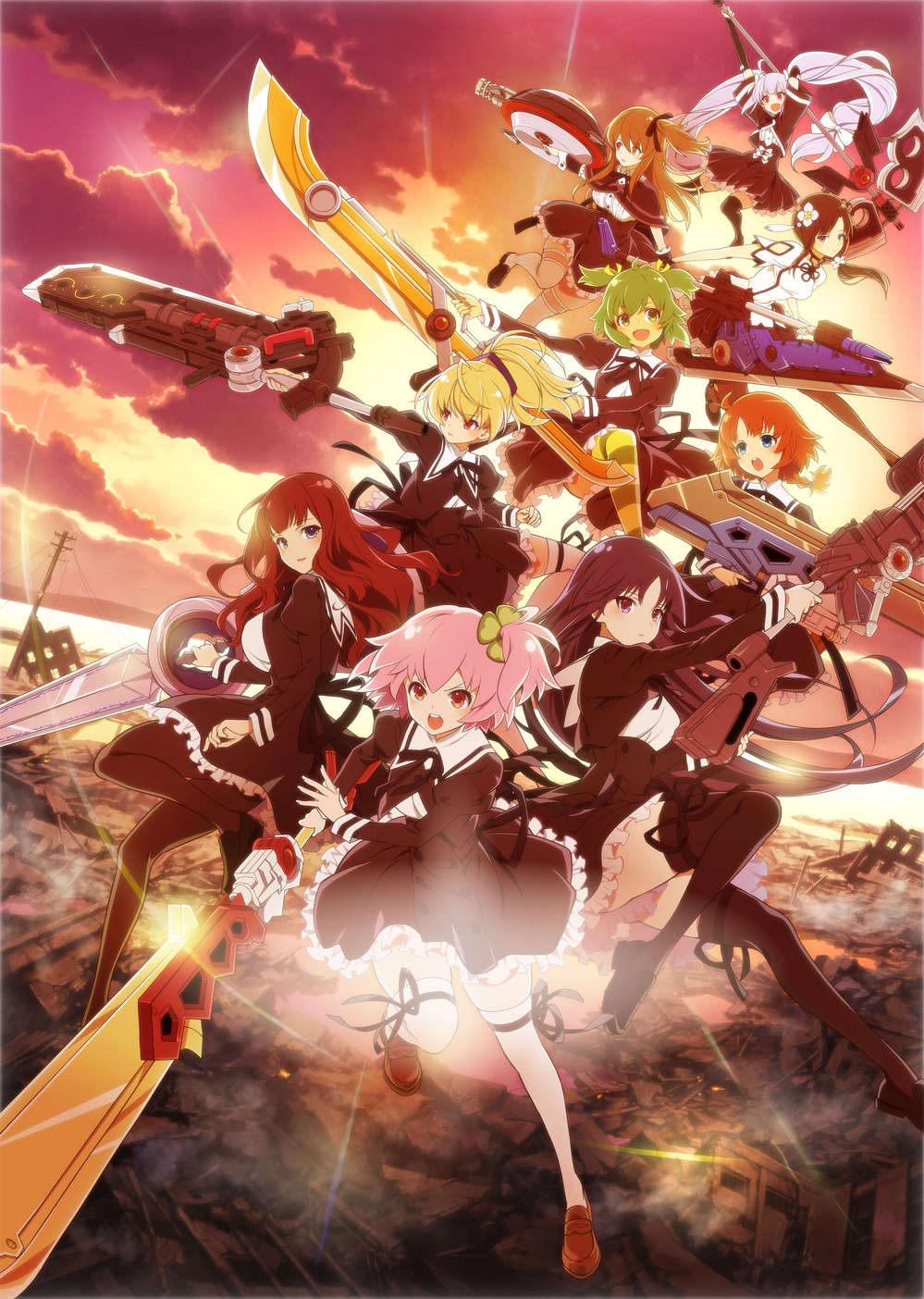 Synopsis: Fifty years ago, mysterious creatures known as the “Huge” suddenly appeared all over the world, posing an existential threat to humanity. To defend against these menaces, soldiers in the form of teenage girls known as “Lilies” use the energy “Magie” within their bodies to power weapons called “Counter Huge ARMS” or “CHARMS.”

After being saved by a Lily two years ago while evacuating from a Huge attack, Riri Hitotsuyanagi vowed to become a Lily herself. She enrolls in the prestigious academy of Yurigaoka, a training ground for Lilies, and discovers that one of her classmates is Yuyu Shirai—the same Lily who rescued her. Much to her confusion, however, the person she thought to be cheerful turns out to be quite antisocial and prefers to fight alone. Even so, Riri still desires to get along with Yuyu and is willing to do anything she can to reach that goal.

With Yuyu and the other Lilies by her side, Riri’s journey on becoming one of them has just bloomed!

Back when I first read the synopsis of this show, it sounded pretty generic and like so many other anime that I had to hit the brakes a little bit on my hype machine. From a story perspepctive, two yuri-ish shows that immediately came to mind were Symphogear and Strike Witches, and while neither is that bad, I thought to myself: “Are we really doing this same story once again?”

Yes, the story in Assault Lily should be easily recognizable to fans of those series, but we also see some influence from yuri anime such as MariMite and Strawberry Panic, and I thought this mashup turned out to be quite entertaining. Specifically, the soeur system seen in MariMite is repurposed as a “Schutzengel pledge”, and it’s basically the exact same thing. Since I’m only interested in the quality of the final product, I’m not really against creators cherry-picking successful elements from other works and putting them into their own, and this “little sister” mechanic gives the show a pleasant yuri flavor that works really well.

Luckily, the show isn’t a cycle of battles with the Huge (what’s with these terrible antagonist names? Symphogear had the Noise, this has Huge. Both are equally bad). A majority of the scenes involve slice of life elements that do a good job of breaking up the action and help to differentiate this from those two anime I listed earlier. Assault Lily doesn’t take itself super seriously, like another Shaft anime (Madoka★Magica), though I thought the comedy in this was rather mediocre.

The show really tried to add a lot of personal drama into the mix, but due to spoiler purposes, I won’t go into it that much and just say that it felt to me like they were trying a bit too hard to force it, and I didn’t find it to be as engrossing as I had hoped for. Also, the intentions of a particular character aren’t explained very well. Maybe that leaves something that could be further explored in a second season? Still, the action is fun, and the yuri-ish moments were cute, so some heavy-handed tragedy wasn’t enough to ruin things for me. Overall, I think I enjoyed the story a little more than I thought I would, yet know that my expectations were pretty low, so that’s not the greatest praise one could receive. 😛

Like the mostly familiar story, the two main protagonists are clichéd character types that you can expect to find in similar anime. The pink-haired genki girl (Riri) and the aloof dark-haired girl (Yuyu) are present and accounted for, but I guess I’m just tired of the predictability involved, and I didn’t feel that strongly about either one of them. For a portion of the anime, Yuyu was hard for me to like, even if she did have good reason to act that way. Once she opened up a little bit, she was infinitely more likable, but that didn’t happen as often as I would have liked. On the other hand, Riri was more or less the same exact character you’d find in tons of anime, so she didn’t feel distinct or all that interesting to me.

On a more positive note, Assault Lily really cranked up the yuri vibes, so I think yuri fans will be pretty pleased with what this anime has to offer. Yuyu and Riri have a lot of cute scenes together, and while this show is still lacking in actual romance, seeing them be as close as they were was probably one of the best things about this show. In fact, the two of them are responsible for arguably the best couple name in the history of yuri, “Yuri”. That’s the name, Yuri. That’s pretty great, isn’t it? 😀

Riri seems like the affectionate type, and that’s also on display in a few scenes with Yuri (the character), but anyone hoping for a kiss between Yuyu and Riri will be disappointed. The yuri subtext approached extreme levels, but the show didn’t take that extra step and make it clear that what’s going on between them and the other “couples” at the academy was more than just very close friendship. For that reason, not everyone will be happy with the yuri in this show, but I can’t complain.

Assault Lily had a lot of supporting characters, and because the season was only twelve episodes long, we didn’t really get to know many of them as well as I would have liked. Some of them seemed genuinely interesting, though others came off as really genetic. In the entire show, if I had to pick a favorite character, I’d have to go with Kaede. More than anyone else in this show, she’s the gayest (and funniest) girl of the bunch, and if the other characters were as forward and bold as her, the yuri score could’ve been a ten. 😛

Since the studio behind this was Shaft, I had some pretty high expectations for the overall presentation of this show. I didn’t expect Madoka or Monogatari-levels of creative expression, but I also didn’t expect this show to appear to be just another action/magical girl anime. That’s not meant as an insult, I just expected something a little more unique from Shaft. As it stands, Assault Lily has plenty of solid action sequences, yet the thing that I most felt could’ve been better was the character art. In particular, I thought the shading left a lot to be desired, and as a result, scenes too often looked bland to me. And while there were some thigh shots, I honestly expected more fanservice from this show. As for the music, it didn’t stand out to me at all. If there were an outlet to procure generic “intense battle music” for movies and TV shows, by the sound of it, this anime would’ve shopped there. At least the OP and EDs are better. 😛

At the end of the day, I got the sense that while Assault Lily: Bouquet is bad, it’s the good kind of bad. The kind where you don’t care that much, because it’s still pretty entertaining. Some people questioned how much yuri this show would have, but it’s actually quite strong in that department. If you liked anime like Symphogear or Strike Witches, you’ll probably like this. Even if you didn’t, Assault Lily might still be able to serve as a guilty pleasure~

– Somebody kiss somebody!
– Main characters are basically copy and pasted from every other anime
– A little underwhelming, for a Shaft anime