END_OF_DOCUMENT_TOKEN_TO_BE_REPLACED

Among all of my Top 10 lists, this was one that was still missing, so we gotta change that quickly!

Though, before getting into the list, let me say the following: Since we unfortunately still don’t have that many full yuri shows, you’ll also find shows with either heavy subtext or yuri as side stories in this list. With that said, let’s not waste any more time. So here are my Top 10 favorite Yuri anime. Enjoy!

END_OF_DOCUMENT_TOKEN_TO_BE_REPLACED

Let me present to you, YuriReviews first and only Yuri Tournament. With this, we will try to figure out which yuri character is the greatest and most loved yuri character of them all.

So what did we do?
• We came up with more than 100 yuri characters.
• We decided to only go for those characters that either show some strong lesbian tendencies, are undoubtedly lesbian, or at least have enough subtext going on to gain a lot of supporters in our community.

And what will you have to do?
Easy, you’ll simply have to vote for the characters that you think deserve the title of the best yuri character the most.

We will divide this competition into 9 individual posts. This post right here counts as Round 0. You can view it as something like a preliminary decision. You can see which characters will take part in the actual competition that follows and also tell us which characters you think are still missing. Those then might be added into the first round.

However, this is not all. In this round, you will decide which characters from shows/games like Love Live!, Touhou, Kantai Collection, Sono Hanabira, and Akuma no Riddle will make it to the first round. Since these shows/games feature way too many yuri-ish characters to add them all to the list, it’s probably a wiser decision to just add the most popular ones.

Just scroll down and click the group you want to vote for first.

END_OF_DOCUMENT_TOKEN_TO_BE_REPLACED

As always, I’m really behind on most of the important updates there are for us yuri fans, and that’s exactly why I decided to collect all the yuri-related news from the past few weeks and months and post them all together in one post. Hopefully I didn’t forget about anything. If I did, feel free to let me know in the comments.

First of all, let’s list all the new yuri or yuri-ish shows that were announced. On a side note, clicking on the shows’ title will redirect you to the websites where I got the info from.

As most of you hopefully know, this weekend, the Comic Market 86 is taking place in Tokyo. Tons of doujinshi, CDs, games. and whatnot will be released during the 3 days this event is taking place. But other than fanmade goods, there was also some quite important news released, so here are the most recent updates:

END_OF_DOCUMENT_TOKEN_TO_BE_REPLACED

Since I already wrote a full review of this anime, I don’t have much to say here, other than the fact that this was my favorite show of the season, and I loved it.

I know, I know, the story has some huuuuuge plot holes, and it somehow ended up not making perfect sense, but I didn’t expect that to happen in the first place. I got what I wanted, you could say, even though the yuri level could have been higher.

END_OF_DOCUMENT_TOKEN_TO_BE_REPLACED

Story: 6/10
In a special class in Myoujou Academy, 12 assassins gather to participate in a deadly game. The rules are simple: If you manage to kill the target, namely Ichinose Haru, you’ll get one wish granted. However, not all of the 12 assassins decide to play along, as one of them decides to defect to Haru’s side in order to act as her protector.

First of all, the premise of this show sounds really interesting. I mean, a bunch of sexy female assassins fighting our two heroines battle royal style? Yes please! However, despite the fact that this indeed sounds nice for whoever enjoys asskicking girls and a lot of action, it does ring some warning bells for those who are looking for a plot that you can actually take seriously.

In this case, as expected, you should indeed not take this story too seriously, but this is yet again a show in which you mostly don’t mind the fact that it gets a bit sketchy at times. In the beginning, I’d say this wasn’t much of a problem. Well, that is if you’re okay with stuff like normal saws being able to fend off bullets and such. But as the story progresses, it gets a little “worse” I’d say.

Introducing a character that appears to have the Highlander Syndrome is one thing, but seeing Hanabusa in her “true form” was even a little too much for me….

I was yet again quite worried how the story would wrap up in the end. Would they give a good reason for the existence of the “Black Class”, and would we even get one? In the end, we got one, and I can honestly say that it’s a good one even. I was both surprised and pleased with the final revelation, and I seriously didn’t expect that to happen. But then that last episode happened….

Was it really necessary to have Nio try to kill Haru… as Tokaku!? I mean that cliffhanger in episode 11 was great, but the way things turned out was rather ridiculous, don’t you think? Ah, well. Most of all, I was afraid that the show would end up being incomplete, but they surprisingly managed to squeeze the whole story into 12 episodes. Well, I think the story would have fit way better into, let’s say, 20 episodes, because that way, the background stories of some of the characters wouldn’t have ended up being that short. In some cases I still don’t even fully understand what happened in the flashbacks, which is very unfortunate. I hope the manga will help me understand it a bit better.

Characters: 9/10
Akuma no Riddle has them all. You’ll find types like: the ojou-sama, the prince, a loli, a schizophrenic, a busty bitch, a pervert, and of course a cute… granny?!

Now, that is one interesting and really disturbing fetish you have there Otoya. Still I love you….

And what do they all have in common? A shitty/traumatic/violent childhood which now makes them coldblooded killers? Well, that’s not true in all cases. Hanabusa, for example, didn’t just turn into a murderer, she just turned into a sexy gundam.

Can you see what we are still missing? That’s right, the airhead and the tsundere. And that’s were Haru and Tokaku come in. By the way, feel free to argue with me about the fact that I just called Tokaku a tsundere.

Anyway, I pretty much loved all the characters, but I really fell in love with only 2 of them. I guess I have a thing for really messed up and crazy characters, so it’s no surprise that both Otoya and Banba made it to my favorites. Honestly, I don’t know why I love Otoya so much. She’s one crazy lesbian killer, but I guess that makes her… interesting? Also, I wanna hug Banba so badly~ 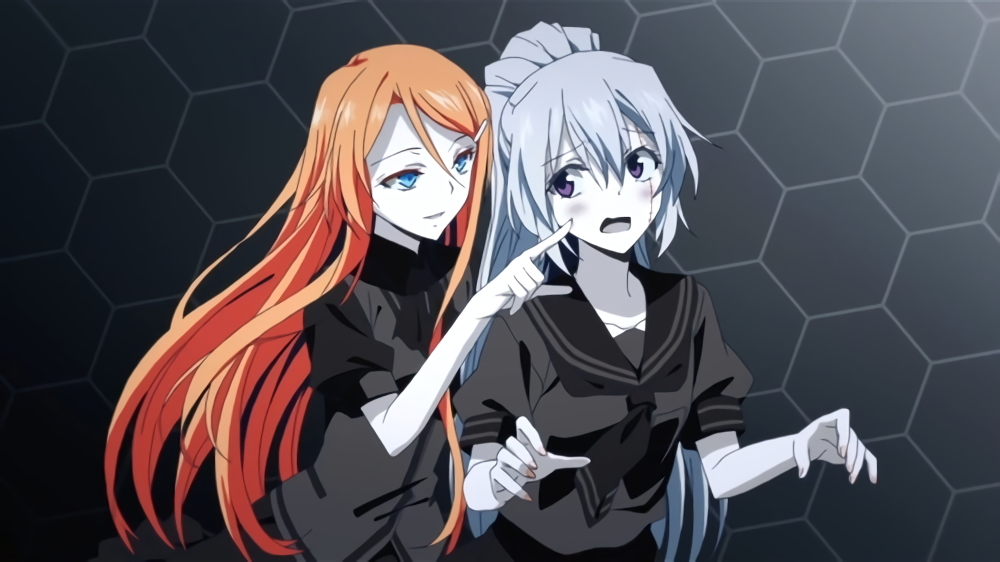 Hanabusa can the job too, though~

Yuri: 6/10
First of all, in pretty much all descriptions of this anime that you will find online, it says that the reason for Tokaku to decide to act as Haru’s protector is the fact that she starts having romantic feelings for her. However, even though I had my yuri goggles on very tightly throughout the whole show, I can’t really say that this fact was made very obvious. There was some blushing every now and then, and of course that underwater kiss that I still can’t really call a kiss in the first place, but that’s about it.

Still, Akuma no Riddle is like a yuri wonderland for anyone who wants to find new awesome ships. I think I already saw yuri pics of pretty much all the characters, and they are mostly shipped with their roommates, which works surprisingly well. I mean how many of you are in love with Team Sexy (Isuke x Haruki)? Or how about Banba x Hanabusa? But I also shouldn’t forget about the only canon pairing of the whole show. That is Chitaru x Hitsugi. Seriously, who isn’t in love with them?!

Animation: 8.5/10 & Sound: 10/10
The animation is good, nothing more and nothing less, so let’s keep that short, because I have far more to say about the music.

In all honesty, this soundtrack is the best I’ve ever heard. In my opinion, it beats Kill la Kill and it even beats Mahou Shoujo Madoka Magica, and these two shows have soundtracks that I thought no other show could beat. Surprisingly, Akuma no Riddle tops them by far!

The opening alone is already awesome, but pretty much all the endings are… just wow. For one thing, they are all done by the original voice actresses, which already makes me squeal quite a bit as it is, but that’s not all. Each and every ending of this show is awesome. There isn’t one that I didn’t enjoy and that has never ever happened to me. Here you have my favorite ending of all of them all:

Total Enjoyment: 8.5/10
This anime doesn’t always make perfect sense, which is probably its greatest weakness, but then again, this didn’t really affect my total enjoyment at all. In fact, I loved it, and with each and every new episode, I came to love it even more. It could have been longer, way longer, in my opinion, but even as it is, it was an awesome show, with awesome characters that I’m pretty sure most of you enjoyed as well.

Also, I shouldn’t forget about the fandom of Akuma no Riddle. Honestly, this show has one of the most hilarious and great fandoms of all-time. Just check Tumblr for Akuma no Riddle stuff, and you will come across themes such as, sexy granny Suzu, Tokaku’s endless love for curry, and my personal favorite, the “Ojou-nator”. Really, I had so much fun reading what the fans came up with~