Story: 7.5/10 & Characters: 8/10
Inari Fushimi is a pretty average middle-school girl. She isn’t very bright, looks quite average, and like many other girls, she also has a crush on her male classmate Tanbabashi. Since she cannot express her feelings very well, her crush seemingly didn’t notice her yet and even seems to be interested in another girl. Driven by jealousy and the wish to be someone else, she finds herself in the chambers of the deity Ukanomitama-no-kami, who grants her one special wish.

Despite the already mentioned characters, namely Inari, Tanbabashi, and Uka-sama, other deities and Inaris family as well as friends also play a big part. For example, we have Inari’s childhood friend Keiko, who’s pretty tomboy-ish, then there is also otaku Maru, and the most recent addition to their circle of friends, Sumizome.

Unfortunately, I think all three of them are somewhat more interesting than Inari, who is a very nice and even endearing character, but that’s unfortunately about it. Also, her crush on Tanbabashi often annoyed me, but it is one of the main themes of the whole anime, so I guess we have to deal with that….

END_OF_DOCUMENT_TOKEN_TO_BE_REPLACED

This is the first time for me to pick up that many shows in a new season. I’m usually someone who finds and starts watching specific anime when they are already done airing.

So for me, this season is pretty special.
I’ve picked up about 10 shows and after watching the first few episodes of each of them, I already know that I’m keeping a lot of them.
I think it’s not only thanks to Sakura Trick that I love this anime season, even if we disregard this show, there are still a lot of other great and promising ones out there.
So let’s start with the first one I picked up.
And what show might this be? 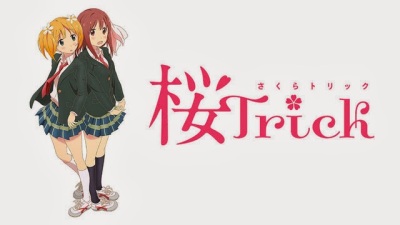 Of course it’s Sakura Trick.
I’ve made a whole blog entry dedicated to my first impression of this specific anime already, so click here if you wanna read it.
After episode 3 I’m still pretty happy with how things are going.
The anime very much sticks to the manga version, which is a very good thing.
Still, since there are only 6 chapters of the manga translated yet, I can’t really predict how this anime is going to continue. Is it going to stay the cute and ecchi “girls doing cute and random stuff” show or is it going to develop an actual plot with a real conflict?
I can’t really see the latter happening, but it’s still possible, isn’t it? I think I wouldn’t mind either way as long as the amount of sweet kisses won’t decrease~