I guess we should continue the trend and keep updating all the old lists. Let’s continue with my favorite artists then. Enjoy! I know there are a lot of great artists around when it comes to Love Live doujinshi. Actually, thinking about it now, the number seems insane.

Anyway, the one name that pops up in my mind almost immediately when I think about those works, and especially while thinking about one of my all-time favorite couples—namely Nozomi x Eri—is Mushiyaki.

Be it the fact that those works are always cute, funny, and visually stunning, or maybe it’s the fact that I think this artist captures the relationship between the characters just perfectly. Well, certainly the occasional NSFW content helps me enjoy this to a certain degree too. 😛

END_OF_DOCUMENT_TOKEN_TO_BE_REPLACED 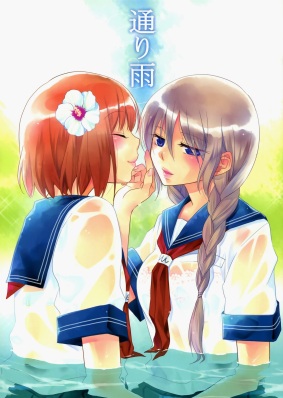 Circle name: GracheGrache
Genre: Yuri, Romance, Ecchi
Works 9/10:
Minase Ruruu is a female manga artist mostly known for her ecchi yuri one-shots. There are unfortunately not that many translated works out yet, but simply because I like love her already released works so much, I just have to write a review about her.
So far there are only 4 translated one-shots out:
Your Fragrance
A Passing Shower
A Cold and After That
This is a Great Hug Pillow
Up until now, Minase Ruruu has released a lot other yuri one-shots as well as doujinshi, and as far as I know, Yuri-ism is translating some more works for us to enjoy right now.
Furthermore, despite the 4 one-shots mentioned above, I’ve “read” 2 other works by her and it seems they are all pretty similar;
END_OF_DOCUMENT_TOKEN_TO_BE_REPLACED