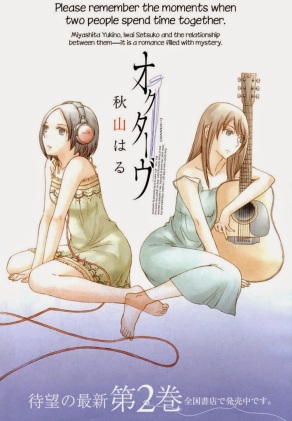 I know, I know, this has been long overdue, but I just recently found the time to finally re-read this so I could write my review. So here it goes.

Story: 8/10 and Characters: 6/10
After a more or less failed career as a singer and idol, Yukino is now living alone in Tokyo, working as an idol manager. She’s very unsatisfied with her life and can’t let go of her past as an idol.

One day she meets Setsuko, a songwriter who shares a similar past to her own. Feeling like she has finally found someone who can relate to her own feelings, she lets herself be taken in by the strangely alluring Setsuko.

First of all, this manga is one of the biggest yuri stories we’ve ever seen. There are no less than 6 volumes focusing on the relationship of Yukino and Setsuko, and the yuri starts out like right when we get introduced to the characters. So unlike other yuri manga that have been going for a similar amount of time like Aoi Hana or Sasameki Koto, Octave differs from them in one big aspect.

Octave fully focuses on the yuri relationship at hand. It doesn’t add in tons of side characters, and it doesn’t take forever for the two protagonists to finally get things going. We’re basically thrown into their relationship from the first chapter on, and the focus is fully set on them for the whole run.