After so many years, ten volumes, numerous specials, and even an anime adaptation, Citrus has come to an end, and I can finally, finally review one of my all-time favorite manga.

But first things first, despite the fact that most of you probably know about Citrus already, let’s start with a short summary for those who have yet to enjoy it.

After her mothers remarriage, Yuzu is forced to move into a new home and enroll into a new school. As prepared and determined as she might be, the new school and especially the student council Mei she butts heads with on the first day, give her a hard time adjusting to this new environment. When she then finds out that said student council is her new step sister, things make an even worse turn. Now add the fact that Yuzu can’t help but be attracted to her new step sister and everything is a mess…

END_OF_DOCUMENT_TOKEN_TO_BE_REPLACED

You all saw it coming, didn’t you? Facebook, Tumblr, Twitter, even Google+; the whole internet is talking about Citrus, and it’s splitting the entire yuri fanbase. As a yuri fan, I admittedly haven’t been around for that many years, but during the few years I’ve been a fan, I’ve never witnessed anything like that.

Our latest Yuri Tournament also proves that Citrus is indeed big, but also hated. I was thinking very long about what word to use here, but hated might actually be very accurate.

You either really hate Citrus or love it. For some reason, there is not that much in-between, and I just thought, why not talk about it… like all the other people. Yay…. 😛

You have been warned. This post is going to be all about Citrus, and I’m a Citrus fangirl on top of that, so please just click away if you can’t deal with it.

So, yeah. How did it all start? Well, it’s been a while, hasn’t it? But even the first chapter of this manga managed to get a surprising high amount of attention, mostly positive. Okay, to be fair, you can’t really go wrong with a first chapter that basically just shows gorgeous art and two girls making out, so at that point, not many people were able to rant about anything.

Though, as quickly as this manga’s popularity rose, haters appeared as well. A few months back, I just thought that those who hated on Citrus were jealous of it. Maybe jealous because its popularity was greater than their favorite manga, but I now admit that I was mostly wrong.

END_OF_DOCUMENT_TOKEN_TO_BE_REPLACED

Before I start with what I have to say, please note that this is not an official announcement!

What I’m about to say is a guess I made based on some pieces of information I found online. I repeat, this is no official information, so please don’t treat it as such. 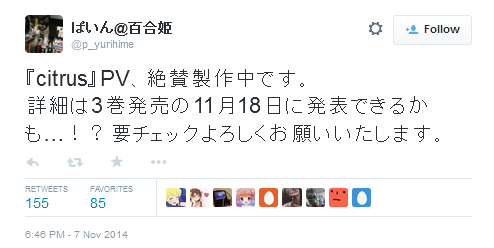 A Citrus PV is in production right now. More information will follow when the third volume is released on November 18th.

END_OF_DOCUMENT_TOKEN_TO_BE_REPLACED

Works: 8/10
While I believe that this artist is mostly known for her most recent work, Citrus, this is definitely not all this artist has in store for us. For those of you who only know Citrus and no other works by Saburouta, you might be in for a surprise.

But let’s still start with her most popular work. Citrus is probably the one work which really boosted this artist’s popularity. We already arrived at Volume 3, which is a lot for anyone who understands just how hard it is for a yuri manga to get more than only one volume. Three is a whole lot in that sense, and it might not even be the last one.

Other than Citrus, Saburouta has only released one more yuri work under this specific name, and that is her adult one-shot Partners, which was featured in Yuri Hime Wildrose magazine last year. Before that, Saburouta was mostly known for her ecchi one-shots featuring heterosexual couples, and in some rare cases, some yuri-ish scenes. Only a few of them have been translated so far, and it’s not that easy to find them online, so if you want to take a look, click here.

END_OF_DOCUMENT_TOKEN_TO_BE_REPLACED

It’s time for another Citrus review, and it surely won’t be the last one. A 4th volume is already in the making. What a blessing~

Story: 7.5/10 and Characters: 8/10
As a short summary, the last chapter of Volume 2 ended with Mei and Yuzu sharing a real kiss for the first time. Of course, the volume couldn’t just end on a purely happy note, which is why a new character got introduced.

Matsuri is one of Yuzu’s friends from before she had to move into her new home. Both of them spent a lot of time together when they were little, and they established a relationship close to that of sisters. Throughout pretty much the whole volume, we learn new things about Matsuri, constantly being reminded that she is simply a huge troublemaker with the only goal in mind to have Yuzu for herself. If that is in a romantic or a sisterly way is still pretty obscure to me.

END_OF_DOCUMENT_TOKEN_TO_BE_REPLACED

While talking about my Top 10 favorite yuri artists, someone asked me whether I could do another Top 10 list about my favorite artists that is solely based on how much I enjoy their art. I think such a specific list wouldn’t be interesting for that many readers, so I decided to do it a little differently.

In this entry, I will talk about art styles in different manga, doujinshi, and also in visual novels. I will pick up different artists, such as Saburouta, Peko, Ooshima Tomo, Morishima Akiko, Nishi Uko, Takemiya Jin, and probably many more. Let’s simply start by naming a few of the artists that I find have the most appealing art styles. Saburouta, for example, is probably one of the artists who became that popular, partly because her art looks so gorgeous. I don’t agree to most of what Citrus haters say about this manga, but in one point they might be right: If this manga was drawn by another artist that wasn’t Saburouta herself, it wouldn’t be that big of a deal right now.

Of course, it’s obvious that the art is a crucial factor in media like manga and visual novels. In fact, in some cases, the art can even make up for a crappy story. I’m not talking about Citrus right now, but there are some cases in which the art saved the whole manga from drowning in mediocrity.

END_OF_DOCUMENT_TOKEN_TO_BE_REPLACED

This is the first time for me to actually review single volumes of a manga, and I’m pretty sure this won’t become a regular thing for me in the future. However, Citrus is so big right now and I love it so much that I just can’t not write about it.

Please note that this review will only cover the 4 chapters of volume 2, so if you’re interested in my first impression of Citrus, or namely the first 4 chapters of this manga, then click here: Review of Volume 1

Story: 7.5/10 & Characters: 8/10
In this volume, we finally find out the reasons behind Mei’s bitchy behavior, see Yuzu and Himeko fight over their crush, and we also witness what happens when Mei’s father finally returns home.

It doesn’t sound like that much, but within just the 4 chapters of this volume, there’s a whole lot going on. Citrus is not really that fast-paced, but it really feels like an emotional roller coaster in some parts. I guess this is something I quite love about this manga; there are no fillers, and every chapter simply delivers the plot you want to find after a 2 month wait. Also, there are no unnecessary sub-stories about the side characters. Citrus fully focuses on Yuzu and Mei, and that is a good thing.